Fuses in cars and other electrical appliances play an essential role. They prevent high currents from damaging key circuits in a car. A fuse is a protective device with two terminals and a thin wire or metal strip running across the terminals.

It’s okay for a car fuse to blow at one point. Unfortunately, it is common in cars and electrical appliances in our homes. You may have probably had a blown fuse if you’re a car owner. Fuses come in different amperages. The higher the amperage, the higher the electric flow it transmits to the key circuit.

In this article, the Rx Mechanic team will discuss what happens when they blow off, how to test 40 amp blown fuses, and replacement procedures. Let’s start with the use of a 40 amp fuse. What Is A 40 Amp Fuse Used For

When there’s a ground fault or short circuit issues requiring the key component to draw higher voltage, the wiring on the fuse terminals will cut, preventing the overcurrent from traveling to the main circuit and damaging it.

Auto manufacturers equip hundreds of ECUs in modern cars. Each of these ECUs plays a specific role in a safe and seamless driving experience. For example, some of these electronic control units control the heater seats, ABS, air conditioning, power windows, and power steering control. Unfortunately, the ”Fuse and Relay’ box is quite small, so auto manufacturers couldn’t design one fuse for each ECUs.

Whenever any electronic control unit malfunctions or goes bad, it may draw high voltage from the car battery. When this high voltage travels to the fuse, the metal strip on its terminal will cut and prevent the overcurrent from traveling to other functioning components. Primarily, the excessive voltage will not blow a fuse unless the component draws excessive current. This singular act protects the main component from damage.

What’s next? Let’s look at how to tell if a fuse is blown in the next section. 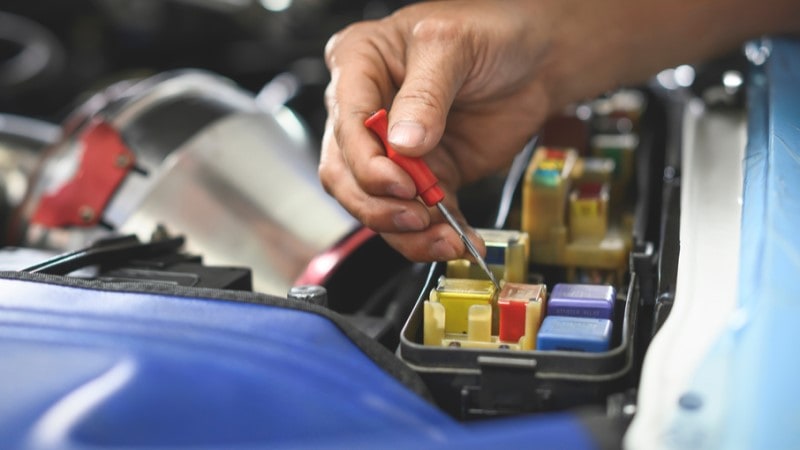 In any case, 30 amp and 40 amp fuses have blade style and cartridge style fuses. First, inspect the wire that runs across the two fuse terminals and see if it is discontinued. If you have a cartridge-style fuse, remove the plastic cover on top to have a clear view of the metal strip across the fuse probes. If the wire is broken, the fuse is bad and needs replacement.

Test lights serve several purposes. First, it is a common tool that every automotive technician should have. To test a 40 amp fuse first, connect the wiring harness to your negative battery terminal. Then, touch the metal pin on the positive battery terminal. If the bulb in the test light illuminates, it shows a proper connection.

Next, locate the 40 amp fuse and touch the test light metal pin on the fuse terminals. Both terminals should light up. If only one illuminates or none of them light up, you have a blown fuse that needs replacement.

Touch the probes on each fuse terminal. You should have the same or similar results. If you have different reading or no reading, the 40 amp fuse is bad. 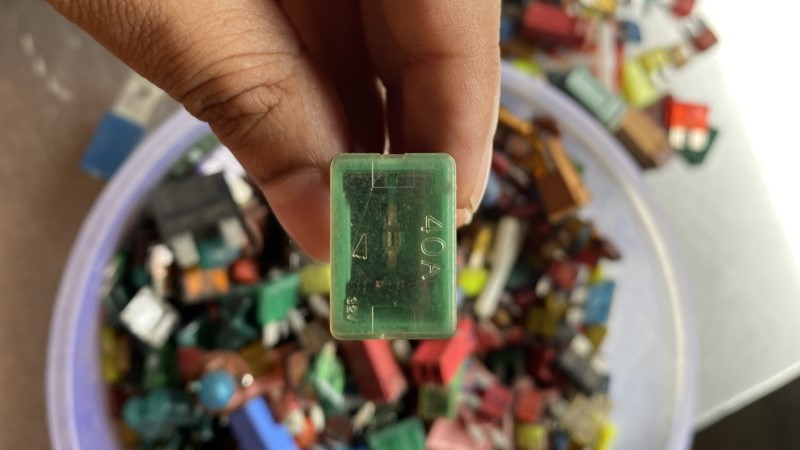 Car manufacturers design a 40 amp fuse to withstand 40 amperages. So, if a higher electric flow wants to travel through the fuse, the zinc strip on the fuse terminals will cut and prevent damage to the main electrical component the fuse is safeguarding. A good fuse has a wire or aluminum strip across the copper terminals. But, you may ask, what does a blown house fuse look like? A blown house will look like a burnt switch.

When electric flow travels from the car battery, it enters one of the fuse terminals and travels through the wire or silver strip to the second terminal. Then, finally, it goes to the main car’s electrical component. If an overcurrent enters one terminal, the higher current will melt the wire that travels to the other end and prevent the current from reaching the other terminal.

What Happens When A 40 Amp Fuse Blows?

Now that we’ve seen several ways to test a blown fuse and what it looks like, what happens when a 40 amp fuse blows? Both blade style and cartridge style 40 amp fuse has a transparent view through which you can see the metal ribbon across the copper terminals. If the fuse blows, the metal ribbon will melt or cut and stop the electric flow from traveling to the other end.

They’re taking shots for the corresponding circuit or component by discontinuing the electric flow. Therefore, these components will not work until you replace the blown fuse. However, I’ll not recommend you bypass a blown fuse for any reason. If you bypass any fuse, you’re sending direct current to the main current and exposing it to overcurrent.

How To Change Blown 40 Amp Fuse

Knowing how to change a blown 40 amp fuse will save you from unnecessary grammar in a mechanic garage from a service technician who may want to rip you off. This means it’ll save you from unnecessary expenses. A 40 amp fuse should cost $1.5 to $2, but an auto technician will charge you $100. Here’s how you can replace a blown 40 amps fuse at home.

Fuses are one of the cheapest automotive parts. They cost between $1 to $2. So, instead of buying a single 40 amp fuse, you can buy it in packs. However, I recommend getting one from your local auto shops because shipping fees from an online store will be more costly than the part itself.

So, open the hood and locate the fuse box. It is a black plastic box next to the battery with ”Fuses and Relay’ written on top.

Step 3: Locate and pull out the burnt 40 amp fuse

Open the fuse box by depressing the clips on the cover. You’ll see mounting bolts on some vehicles. Loosen the bolts to access the fuses inside. Next, locate the blown fuse and pull it off. You can either remove it by hand or use a pair of pliers. Whichever works best for you. Once the fuse is out, proceed to the next step.

Test the fuse and confirm you’re replacing the blown one. You can test it by visual inspection, using a test light, or using a multimeter. Check the testing guides above and follow the instructions in checking the blown fuse.

Ensure there is no dirt or debris on the port you removed the blown fuse. After that, gently snap in the new 40 amp fuse. Finally, close the fuse box using the reverse process.

We don’t want you to make such a mistake entailing your wallet. That’s why we answered the mind-boggling question, ”what does a blown 40 amp fuse look like” and guided you on how to test and replace it.