Since the 1880s, internal combustion engines have been making waves in the automotive industry. Manufacturers have improved engine designs over the years, and various engine layouts exist in cars. For example, we have boxer, inline, and V engine designs. 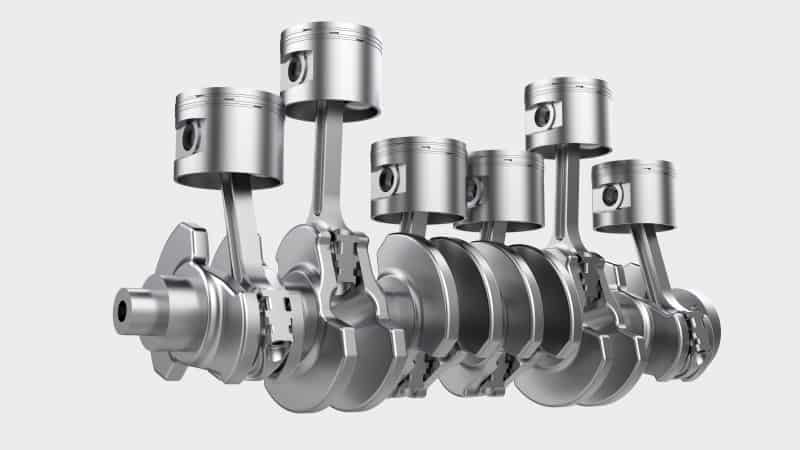 Crankshafts are rotating shafts that convert the reciprocating movement of the pistons into rotational motion in internal combustion engines. The crankshafts have two major parts – the cranks and the crankpins, which the connecting rods are connected to.

The crankshafts are typically molded with cast irons. Although, most crankshafts in performance vehicles are manufactured from forged steel. The manufacturers produce it by heating steel until it becomes red hot. After that, they form the shape using extreme heat pressure.

The manufacturers use nitride steel materials or alloyed heat-treatment steel to forge it to withstand wear and the strain of rotary motion. The journal surface is also hardened to absorb friction.

As reiterated above, the function of the crankshaft is to change the linear motion of the pistons to rotational motion. In the process, it offers a smoother ride to all the pistons in the cylinder walls.

During the combustion process, the engine generates power. The generated power transforms into the rotational motion of the crankshaft, and the reciprocating motion of the pistons is converted into torque. The torque is then transmitted to the flywheel. Then, the flywheel sends the engine power to the transmission, which moves the wheels. 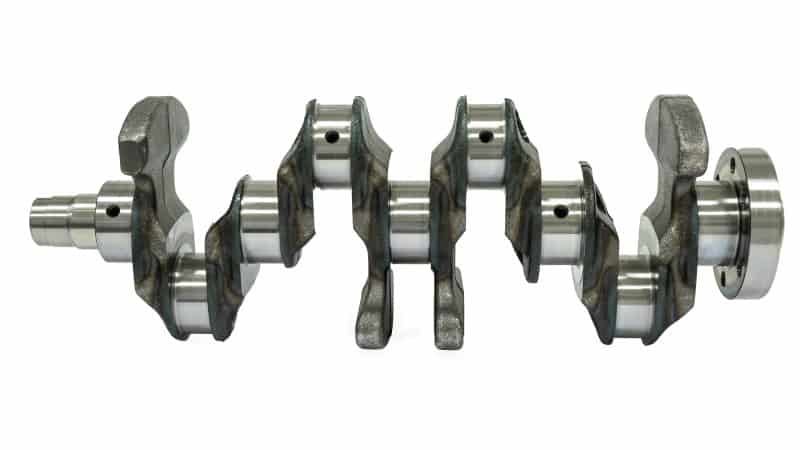 How many crankshafts are in a v8?

All engines, including boxers, inlines, and V engine layouts, have one crankshaft. So, if you’re asking how many crankshafts are there in a V8 engine, the simple answer is one. The V8, V6, and other engines with the V layout are referred to as V engines because they have two-cylinder banks with a V shape when viewed from the front of the engine. Engines with two-cylinder banks have a single engine block. The banks meet at a single-engine block with one crankshaft.

If you’re wondering how many camshafts does a V8 have? Check out this well-detailed article on the number of camshafts in V8 engines.

Even the monstrous Bugatti with a W16 engine, which has 16 cylinders and is arranged in four-cylinder banks, has one crankshaft. One crankshaft is the most reasonable number of crankshafts we should have in road cars. This is because the engine flywheel bolts to the crankshaft and connects directly to the clutch and transmission.

Therefore, for manufacturers to design cars with two crankshafts, the vehicle will have two transmissions or linkage systems to link two engines to one transmission. However, you can find two crankshafts in aircraft engines and tandem twin engines.

Q: Does V8 have two crankshafts?

All V-type and inline engines have only one crankshaft. So, no, V8 does not have two crankshafts. Using two crankshafts in a V8 engine will require having two transmissions or at least some linkage systems to connect two engines to one transmission.

Q: How many crankshafts are in a V6?

Like other V-type and inline engines, a V6 has a single crankshaft that connects to all the connecting rods. One crankshaft simplifies the design and at least curbs the need for two transmissions in a car.

The V6 has two head cylinder blocks, four camshafts in DOHC engines, and two in SOHC engines. Both the DOHC and SOHC engines have one crankshaft.

Q: Can a car have two crankshafts?

V8 engine means an engine with eight cylinders, meaning they use eight spark plugs, eight ignition coils, eight pistons, and connecting rods. However, the “V” in the V8 represents the engine layout. For instance, a V8 engine has the shape of the letter ‘V.’ The V layouts typically have two cylinder heads and one engine block.

Q: How many cranks does a four-cylinder have?

Q: How many pistons does a V8 have?

The only difference between the V8, V6, and four-cylinders is the number of cylinders. A V8 engine has eight cylinders, with one piston for each cylinder. This means that V8 engines have eight pistons.

Building an inline 7-cylinder will require long space on the engine bay, which will not be good for road vehicles. However, we have seen inline 8-cylinders in cars, which should be longer than a 7-cylinder engine. Though, the manufacturers stopped production in the late 1950s.

Q: Does every engine have a crankshaft?

All car engines use one crankshaft. Although, like every other thing in life, there are exceptions to every rule or application. The same applies to car engines. Therefore, all cars have one crankshaft, including V8, except vehicles with twin engines.