Hybrid cars are built with a lot of similarities to regular gasoline-only vehicles; hence, the reason why their components are sometimes misunderstood. The Prius is a classic example of such a hybrid car. Most vehicle enthusiasts keep asking, “Is Prius inverter coolant same as engine coolant?”

While some people have concluded that the two are the same, others argue about their difference. If you’re about to join the bandwagon effect, wait a moment and read this article to the end before you draw your conclusion.

This post exposes the role of the Toyota Prius inverter, how the inverter coolant works, and why it is different from the regular engine coolant. 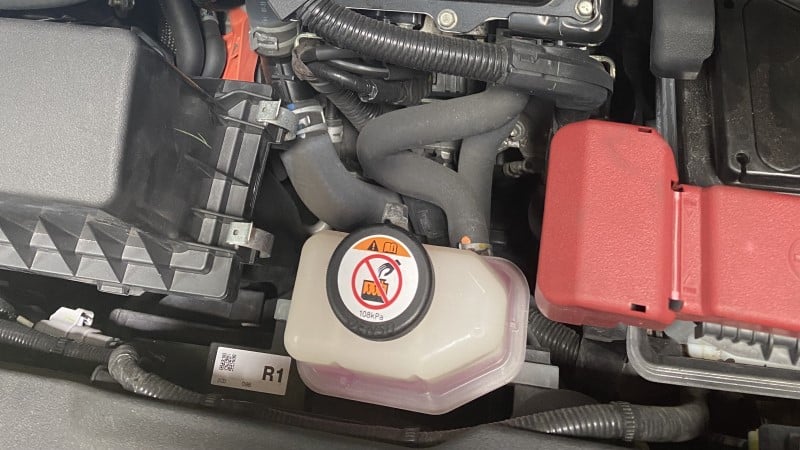 Read Also: Most Common Hybrid Car Problems and What to Do About Them

What Is Inverter Coolant In Prius?

The Prius inverter coolant is the fluid in the cooling system that is responsible for absorbing the heat generated by the electricity as it changes from direct current (DC) to alternating current (AC).

The inverter in the Toyota Prius has the significant responsibility of keeping the car running efficiently. Therefore, the component must be kept cool in order to retain the life of the inverter’s circuitry. This is where the work of the inverter coolant is needed.

As technology advances in the hybrid world, Toyota has not failed to upgrade the Toyota Prius consistently. As a result, it is one of the leaders in the hybrid vehicles sector in the automotive industry.

The inverter in the Toyota Prius is somewhat heavy-duty; hence it was designed to require liquid cooling. Therefore, Toyota placed the inverter in a strategic location near the radiator under the car’s hood in the engine bay.

What type of coolant does Toyota Prius use?

The Toyota hybrid inverter coolant is a high-quality fluid manufactured with the same contents as the coolant found in brand-new Toyota vehicles. The fluid comes with a distinctive pink color.

The SLLC is designed to engender durability and maximum protection of the Toyota Prius. However, it doesn’t include any harmful silicates. This coolant is highly recommended if you drive a Toyota Prius and you need a coolant change.

In case you’re running low on coolant in your Prius, don’t be tempted to use any brand that comes by, as you may be causing harm to your car. It is important to stick to the recommended brand in order to be on the safe side.

Conversely, the engine coolant is responsible for regulating the car’s engine temperature levels in order to avoid overheating. This particular coolant is water-based, consisting of water and ethylene glycol on a ratio of 50/50.

The generation II Toyota Prius was built with two cooling systems designed to handle the duality of the car as a hybrid. Although both are cooling systems, their area of operation differs, as well as the designated coolant for each cooling system.

The inverter coolant has its reservoir at the center in the engine bay, while the engine cooling system is situated on the passenger as a major part of the radiator assembly in the engine compartment.

The overflow reservoir and the cap are usually hidden by a plastic cover; hence, most vehicle enthusiasts believe that the Prius has only one cooling system for both dimensions of the hybrid operations. It is obvious that such observers are not meticulous in their observations. 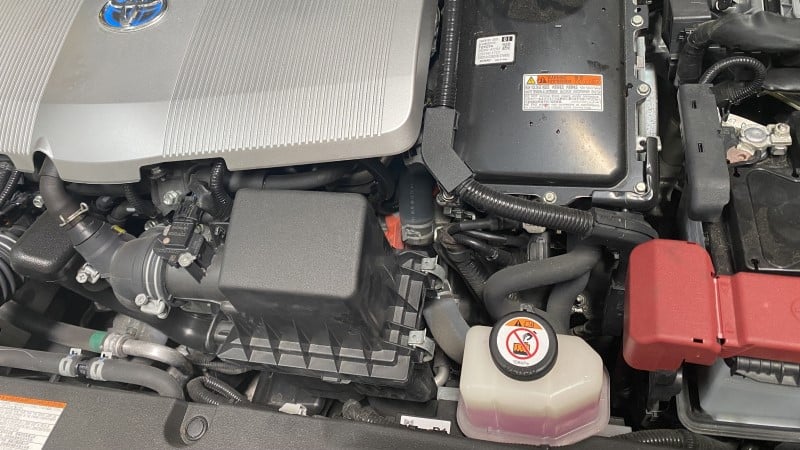 Of course not! The hybrid inverter coolant is entirely different from the engine coolant. Hybrid cars are equipped with two different cooling systems.

Both coolant fluids are not expected to go below the MIN mark or above the MAX mark. This is because the coolant expands at a high temperature; hence the MAX point has some space to allow for the expansion process.

On the other hand, allowing the fluid to go below the MIN point will starve the cooling system and automatically result in overheating. This can lead to severe damage in the car if you fail to remedy the situation quickly.

Although hybrid cars have a couple of advantages, they also come with a lot of responsibilities to keep them running efficiently. Therefore, if you drive a hybrid, maintaining an optimum coolant level in both cooling systems is one of the main maintenance cultures you must imbibe.

The hybrid inverter coolant fluid is circulated through the cooling system by an electric pump. The electric pump works in synergy with a liquid cooling loop to circulate the fluid through the car’s battery and other related electronics that play various roles in hybrid operations.

While the coolant circulates, the liquid cooling loop transfers the heat generated by the electricity (as the direct current is being translated into an alternating current in the inverter) to the outside environment of the car via the radiator.

Overheating is prevented by the cooling system’s heat dissipation process in a Toyota Prius. This helps the hybrid car run smoothly without any glitches. However, you must ensure that your Prius inverter coolant pump, tubing, coolant fluid, and radiator are in good condition.

Do Hybrids Use Special Coolant?

Yes! Hybrids use designated coolants, which are unique to their manufacturers in most cases. Since the inverter cooling system is different from the engine cooling system, it is crucial to mind the type of coolant used in these vehicles.

Hybrids are designed to consume coolants with a mixture of mineral plus organic inhibitors. These elements are usually free from harmful additives like amines and nitrites. Using the recommended coolant for your hybrid car is non-negotiable if you do not want any complications.

For example, Toyota recommends the Super Long Life Coolant (SLLC) for the Prius, while the Ford Fusion uses the Dex-cool 50/50 coolant. Remember, the coolant is very crucial to the smooth operation of any hybrid car. Therefore, you must avoid running your Prius inverter coolant low.

To keep safe, ensure to monitor the fluid level regularly in order to top it off when necessary. Do not exceed the MAX point either when refilling because going beyond the two standard marks will do more harm to your car.

A Toyota Prius inverter coolant replacement is estimated to cost around $171 – $196. The cost covers the car’s coolant drain, flush, and refill. Meanwhile, labor is estimated at around $97 – $122, while the cost of the parts is about $74, respectively.

However, the figures above do not include taxes or any other fees. Also, the total cost of changing your Prius inverter coolant may vary, depending on the model, year, or chosen location for the coolant change.

The fact that the Toyota Prius is a hybrid simply points to the duality of operation in the car. So, if you were contemplating, “Is Prius inverter coolant the same as engine coolant?” this unveiling of the two cooling system’s functions and why the coolants are not the same will suffice to answer.

It is essential to understand their differences to know how to maintain your hybrid car effectively. Assuming that the two coolant fluids are the same may mislead you to use a regular engine coolant in your Toyota Prius inverter cooling system.

Therefore, strictly mind the recommended coolant for the inverter cooling system and stick to it. If you drive a Prius, ensure to keep the schedule for your Prius inverter coolant change interval.