Radiator vs intercooler. What’s really the difference between these two? We’ve come across many vehicle users who do not know a hoot about the differences or how these devices operate. Most of them have wrong information while others can’t really tell anything at all, and we are sure there are more folks out there who also need to be educated on this subject.

So, we decided to draft out this concise article to help you all out; you should be well informed after reading this content.

How Does Radiator work?

A car radiator works by pushing the coolant through metal fins (thin metal fins), which effectively transfers heat from your car to the atmosphere. For vehicles designed with a fan, the fan blows air across your radiator to aid with removing hot air from your car.

It is a fact that engines generate a lot of heat during operation. To avoid engine overheating, your vehicle’s cooling system pumps coolant to the engine, and the coolant takes in the heat from your engine and takes it away from the block. The coolant carries the heat produced from your engine to the radiator, which cools it down by blowing air across the liquid, exchanging the heat with the atmosphere.

The radiator has several vital components in this heat transfer process, the pressure cap, core, outlet, and inlet tanks included.

A lot of newer vehicles are produced with aluminum or copper radiators. The coolant travels through mounted tubes from the inlet to the outlet tanks. The tubes have a tabulator in them which causes an increment in the turbulence of fluid (coolant) flow in the tubes.

The heat amount transferred to these tubes from the coolant flowing through them is dependent on the heat difference between the coolant and the tubes. So if the coolant quickly reduces in temperature, there will be less heat transfer to the tubes.

How Does Intercooler work?

An intercooler is a machine that reduces the temperature of the intake air in intercooler turbo engines by utilizing a forced induction, and this is done with either a supercharger system or turbocharger.

The intercooler’s primary work is to reduce the hot air temperature after the air has been compressed by your supercharger or turbo, just before it goes into the engine.

The turbocharger functions by compressing air, which increases its density before it gets to your engine cylinders. Due to the squeezing of air into the various cylinders, the engine will effectively burn fuel, increasing your machine’s power.

This process causes the emission of a lot of heat, which elevates the air temperature going into the engine. But as the air increases in temperature, it becomes less dense, lowering the various cylinder’s oxygen content. All this hinders your engine’s performance.

Now, this is where your car intercooler comes to play. It fights against this process. Cooling the compressed air, so your engine can have enough oxygen, which improves the combustion process in the various engine cylinders.

You also have to know that reducing the compressed air temperature enhances the engine’s effectiveness by ensuring a better fuel mileage ratio.

When the cool compressed air flows through the intercooler, it goes to the engine manifold and then into the cylinders. The simplicity of air-to-air intercoolers makes them an easy choice for turbocharged cars.

The latter, air-to-water intercooler, like the name implies, uses water to cool the compressed air. The water is pumped through a unit takes out the heat from the air as it flows through that unit. As the water increases in temperature, it passes through the cooling circuit or radiator before going back into the intercooler.

Air-to-water intercoolers are smaller in size compared to air-to-air, so it is perfect for engines with not enough space, and for the fact that water is a much better heat conductor than air, this intercooler is best for a wide range of temperatures. However, they are not common in most vehicle engines.

Yes, the radiator and intercooler are both heat exchangers typically designed for cooling engines. But, there are differences in operation which separate these two, and they are highlighted below: 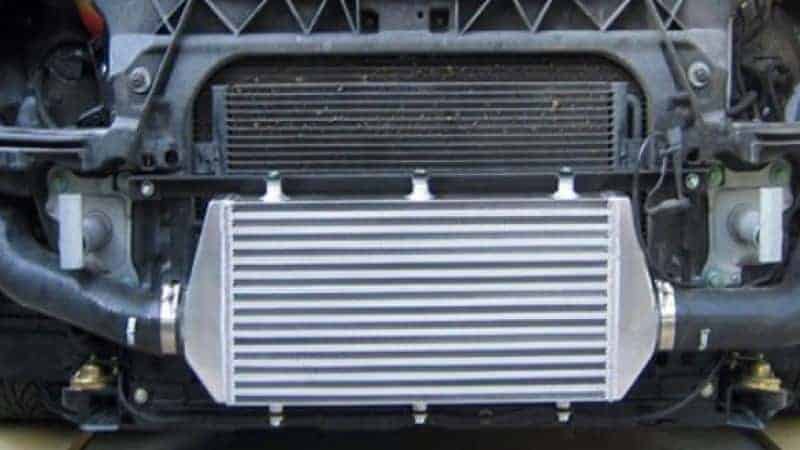 That’s pretty much the fundamental difference; we advise you to go over them again to understand these facts.

Q: Do you need a radiator if you have an intercooler?

However, radiators are designed almost all to keep the engine in a cool state. Radiators are used in supercharged or turbocharged engines to provide maximum engine power.

An intercooler is primarily needed in cars that have to produce high speed and acceleration.

Q: Does an intercooler add horsepower?

Yes, the intercooler adds horsepower by making the compressed air denser as it flows into the intake manifold, resulting in a better mixture of air-to-fuel in the cylinders. Hence, increasing power output.

Several factors have to be examined when estimating just how much horsepower an intercooler adds to your engine’s total output.

Q: Can you put an intercooler in front of a radiator?

The intercooler is usually put in front of a radiator, and you should see that in the radiator stack. Although it won’t remove as much heat as the radiator, your system should work fine.

Generally, it is better to place your intercooler in front of your radiator. The intercooler transfers heat through an air-to-air medium, which is less effective than the radiator, which functions through air-to-water.

This implies that transferring hot air from the intercooler doesn’t reduce the heat shedding capability, but it will definitely affect the intercooler shedding ability if the case is reversed.

We’ve seen some cases where placing the intercooler in front has led to the rapid increment of coolant temperature, but this can be solved with minor upgrades, high-quality radiator fans, and a water pump.

Q: Can you run an intercooler without a turbo?

You can technically run an intercooler without using a turbo, but this isn’t advisable. It restricts the air that flows in your engine a lot more. The wise play to make if you do not want to use a turbo is to get a cold air intake. You should check the relationship between intercooler vs cold air intake.

However, the losses still outweigh the gain with a turbo-less intercooler setup.

The turbo pressurizes the air, and this process causes the turbo to get hot. The intercooler cools the turbo down relative to the atmospheric temperature, so your engine does not overheat. Now, if the turbo isn’t there, nothing will be gained. Your intercooler will cause an obstruction to the air intake.

Considering all these facts, you probably shouldn’t try running your intercooler without a turbo.

But then, can you use an intercooler as a radiator. No, despite their similarities, this isn’t right. But if left with no choice, there are different types of intercoolers. Picking the right type should be able to replace your radiator to an extent.

Q: Does an intercooler improve MPG?

The intercooler alone does not improve MPG. By cooling the compressed air, it allows more fuel to be injected without experiencing alarming exhaust temperatures. With this, you will be getting some boost at throttle and speed levels.

When you have an excellent intercooler in your bay, it should increase your engine power and efficiency.

Q; Why is your radiator essential?

The radiator is a vital component in an engine system because it is the main passage through which an engine releases heat from your vehicle. A bad radiator can cause severe engine problems, which resulted due to overheating of the engine.

Physical damages mainly cause a faulty radiator, and one of the prevalent symptoms is a smoky exhaust.

So, guys, that is everything you need to know to tell the difference between a radiator vs an intercooler. It isn’t complicated at all, and you can see that now. It is imperative you get the correct information, especially about your vehicles, cause you don’t want to end up damaging your most precious car due to some misunderstood information. That’s very hurtful.

If you need more clarity on some device mechanisms, like the Aftercooler vs intercooler, or parts relating to any vehicle, do not hesitate to let us know. So we get you sorted out.

link to Radiator Fan Not Working When AC Is On: Causes and Fixes

You’ll see car radiators on virtually all road-going vehicles. The car radiator fan is an essential component of the cooling system, which blows off heat from the radiator fins and helps keep the...

Continue Reading
link to How To Test Car Thermostat Without Removing It?

A vehicle thermostat is a crucial component of the cooling system. It helps transport coolant from the radiator to the engine to maintain optimal engine operation.  It is a good practice to...