The acronym PCV valve, which stands for positive crankcase ventilation, transfers excess gas from the crankcase to the PCV valve. From there, it goes to the intake manifold and down to the engine again. Suppose the PCV valve hose breaks; there will be PCV oil consumption. That is to say, the gas will not go back into the engine, and the engine will experience a loss of power and have increased emissions. In this article, we’ll discuss at length how you can test and replace your PCV valve and bad PCV valve symptoms. Before we move to that, Here’s this article in brief; what is a PCV valve? How does a PCV valve work? And how to tell if the PCV valve is bad. 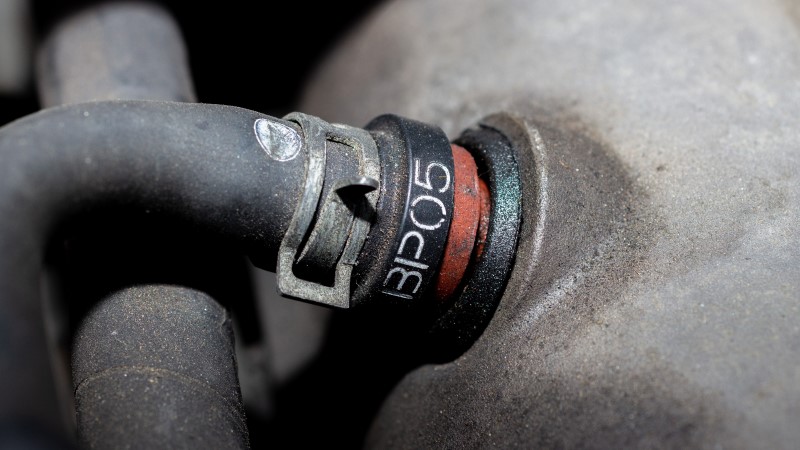 What is a PCV valve?

How does a PCV valve work?

Unless you’re a skilled automotive mechanic, chances are, this is your first time hearing the name ‘positive crankcase ventilation (PCV) valve,’ or maybe you have heard it, and it seems complicated. It’s not complicated as it might seem. You will at least understand how to diagnose it, how it works, and PCV valve functions after reading this article. Let’s start by refreshing your mind on how the internal combustion engine works.

An internal combustion engine is manufactured on a series of cylinder walls with pistons moving up and down in each cylinder wall. The air/fuel mixture is pumped into the combustion chamber via some set of tubes called intake manifold through the engine head intake valve[s] where the spark plug produces a fire that ignites the air-fuel mixture. When the spark plugs generate sparks to ignite the air-fuel mixture, it causes an explosion, and the pressure produced as a result of this explosion pushes the pistons downward, which causes the crankshaft to spin. As the crankshaft spins, it pushes the pistons upward to repeat this process and, as a result, causes the gears in the transmission to turn, which eventually causes the car to move. Meanwhile, as the pistons are coming up, it pushes out the leftover air-fuel mixture from the explosion through the exhaust.

This is where the PCV valve comes onboard. As the combustion process occurs, a certain amount of gas slips down into the crankcase through the space between the piston rings and the cylinder walls. The crankcase is the protective cover that houses the crankshaft and the engine oil. This escaping gas is unavoidable, and it’s known as blow-by. It’s also unwanted because, over time, the escaped gas will cause your engine oil to clump together and cause engine sludge problems.

From the early days of automotive invention till 1960, these escaped gasses were removed by allowing air to circulate freely through the bottom plate, venting and wafting away the gasses as emissions. In the early 1960s, automotive manufacturer’s invented the PCV valves, which is considered the starting of automotive emission control.

So, how does a PCV valve work? The positive crankcase ventilation valve recycles the escaped gas (blow-by) to the inlet manifold and returns it into the engine as fresh air to repeat the process. You don’t want to have these gasses inside your engine – since they are mostly air, they can cause a lean engine – too much air and too little fuel, which is not good for the combustion process and your engine’s overall health. These escaped gasses should be recycled when the car runs idle or on low-speed maneuvers.

Luckily, when the engine is running, the crankcase’s air pressure is higher than the air pressure in the manifold, and it’s the lower gasses that export the blow-by to the intake manifold. When you rev or give gas to your engine, the suction goes down, and the air moisture in the intake manifold goes up, reducing the number of escaped gasses (blow-by) returned into the cylinders.

This is perfect because your engine does not leave blow-by gas when you rev your engine. The truth is, when you give more gas to the engine, the pressure in the intake manifold spontaneously increases above the pressure in the crankcase. Since the PCV valve’s purpose is to remove the blow-by gas from the crankcase,  the positive crankcase ventilation valve is designed to shut off when this happens and prevent the gas from back flowing. 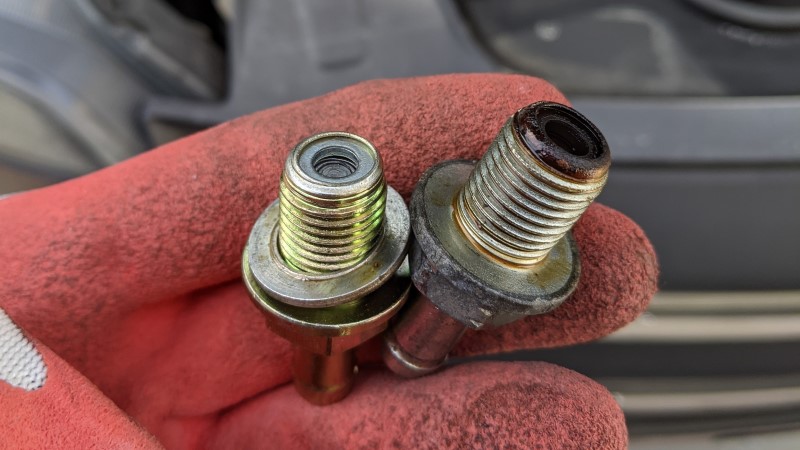 Most PCV valves are made of hard plastic, hose, and spring inside. Over time, they will wear out due to the harsh conditions in your engine bay they are exposed to. Because of the importance of the PCV valve, you will see some PCV valve symptoms that tell the driver the valve’s condition when they start failing. Let’s quickly look at these symptoms to know what to do when you notice any of these signs.

A common symptom of a defective PCV valve is that your engine check light will start flashing on your dashboard. The moment your engine light pops up on your dashboard, there are faulty codes that have been stored in your car computer to tell there is a problem when you carry out a PCV valve test or diagnosis. To diagnose and read the stored trouble code, you need a quality scan tool.  PCV valves fitted on some older cars without an electronically controlled engine will not exhibit this sign.

Another widespread symptom of a lousy PCV valve is rough idling and increased engine rpm. Since the PCV valve controls the airflow between the intake manifold and the crankcase, a vacuum leak due to a pinched hose, collapsed or shrink hose, a clogged valve due to dirt and debris will cause rough idling. If you have rough idling, it’s essential to test your PCV valve since testing them will not take long.

Since the PCV valve controls the intake manifold and the crankcase, a lousy PCV valve can cause a Lean or rich engine due to the wrong air-fuel mixture. When your engine is running rich, you’ll notice a bad PCV valve symptom, white smoke from the exhaust tailpipe, and you’ll also perceive a gas smell from the smoke. A lean engine is often hard to diagnose, but it’ll cause engine misfire.

Since you can get a Lean/rich air-fuel mixture ratio, if the PCV valve clogs, you’ll experience a misfire while the engine is running on idle and while driving down the road. Whether you have too much air or too much fuel ratio, your vehicle engine will misfire and run sluggishly.

suppose the PCV valve or the hose attached to it is clogged up by moisture; you will get a very high pressure inside the engine due to the excess gas that is not getting out through the PCV valve. When this pressure builds up in your engine, it will start looking for a way to get out. By so doing, it may end up damaging the engine seals to get out through them. If you observe several oil leaks and increased oil consumption, you need to inspect the PCV valve and the hose to ensure they are not clogged up.

Gray/white/black smoke from the exhaust:

How do you test and replace a PCV valve?

Many vehicle manufacturers have different component replacement and maintenance intervals. PCV system service is no exception. However, some manufacturers suggest servicing them every 20,000 miles. In general, you should carry out a PCV valve test and servicing every 20k to 50k miles. In any case, earlier and more frequent inspection and maintenance help to keep your engine running nice and smoothly. So, to start PCV valve inspection in your car, first, you need to find the valve location in your vehicle.

The PCV valve location varies contingent on your car’s make and model. 90% of the PCV valve in automotive engines are found on the valve cover, while on some other vehicles, they are found on a breather hole on the intake manifold. If you can’t locate the PCV valve on your vehicle, you can purchase a service repair booklet for your car model from any nearby auto store.

In a situation you have a clogged PCV valve, damaged hose, or defective grommet, simply take it off and replace it with a new quality one. PCV valves and their connections are some of the cheapest components in your vehicle; as such, you need to go for a high-end one.

Q: How long can I drive with a bad PCV valve?

Ans: The positive crankcase ventilation (PCV) valve is cheap, so you shouldn’t ignore changing it at recommended intervals – around 30k – 50k miles. It’s never recommended to drive long with a defective PCV valve. Driving up to 10hrs with a lousy PCV valve could be very risky.

Ans: Yes, you can clean the PCV valve with WD-40. All you need to do is, disconnect the PCV valve from the rubber grommet on the valve cover or intake manifold and spray WD-40 on the valve and allow it to penetrate in to dissolve the dirt and debris inside, and flush it out with WD-40. However, I do not recommend cleaning a clogged PCV valve – you can get a high-end valve for under $10.

Ans: Due to the high pressure in your engine, a defective PCV valve can cause engine oil leaks from serious engine seals resulting in excessive oil consumption and oil puddles on your vehicle. Ensure you inspect or contact a professional mechanic to inspect and replace the lousy PCV valve.

Q: How often should a PCV valve last?

Ans: There are no replacement intervals for PCV valves. PCV valves should last as long as they should. Ideally, you should inspect your PCV valve on every major maintenance. Or, you can replace it every 30,000, 60,000, or 90,000 miles, depending on the result of your test and how it looks.

Q: How much should it cost to replace a PCV valve?

Most times, bad PCV valve symptoms show up in the form of bad sensors. This is why it is imperative to check your PCV valve and other related components regularly. Finally, most PCV valves and their related components are worth $5 to $10, so it pays to regularly check and replace them to avoid costly repairs that might even damage your engine.

One of the most important ways to keep your vehicle in a good performance is changing motor oils at the right times and replacing it with the right type. One of the common types of motor oils is the...