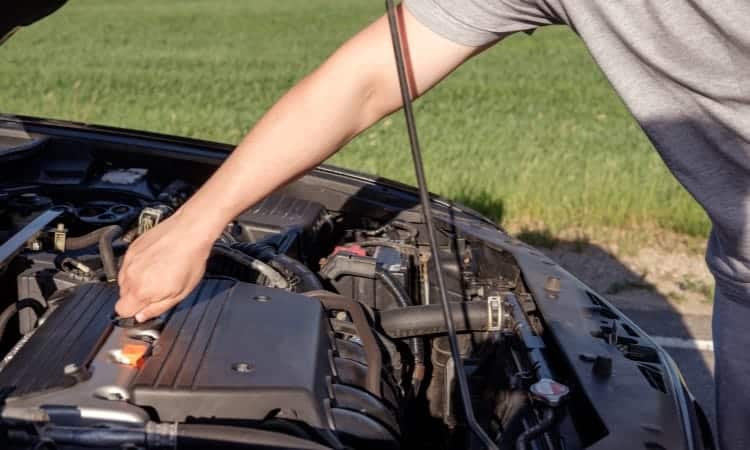 Internal combustion engines, typically, are controlled bombs: fuel and air burn to drive crankshafts and pistons. Power is produced as a by-product of this violence, although there are more products produced. During the combustion process, increased pressure on the piston pushes droplets of fuel, oil, and combustion gases into the crankcase via the piston rings. This mixture is commonly referred to as ‘engine blow-by.’

A blown engine is typically one of the most expensive repairs that owners often encounter. Moreover, the vehicle’s performance significantly lowers, and oil consumption increases. This in-depth guide will help you to know what is blow-by, its symptoms, how to treat it, as well as ways of ensuring your vehicle is always at optimum efficiency. Therefore, read on to the last word, and you certainly won’t regret sparing a second!

What is Engine Blow by?

A blow occurs when there is a leakage of a mixture of air and fuel. The leakage occurs between the cylinder wall and the piston into the crankcase of a vehicle. A lot of people wonder a lot how much blow-by is too much, and the only sure way to find out is by carrying out a diagnosis on your vehicle’s engine. Loud or sputtering noises from an engine accompanied by clouds of exhaust fumes could be red flags for a blow-by.

When cylinder walls and rings begin to wear, they become less capable of maintaining a compact seal. Also, as a car age, the chances of a blow-by occurring increase significantly. The soot and deposits that are leftover due to incomplete combustion collect on the rings, which inhibit their seal and thus worsening blow-by.

Generally, blow-by is not a good thing; thus, it is neither easy nor cheap to fix. Smashed piston rings are often on the spot for causing a new engine blow-by. When these piston rings are continually pushed back and forth in the cylinder wall, they wear out with time. This leads to gas leakage and, eventually, a blow-by.

Pistons are crucial for moving the crankshaft. When they start to wear out, they end up smaller, whereas cylinder walls become bigger. Wearing out of these pistons creates some grooves in the pistons. The air-fuel mixture eventually finds a way into the crankshaft.

The non-stop movement of pistons eventually leads to damaged cylinder walls. If not resolved immediately, the walls are depleted, and thus gases start leaking. The rings of our vehicle’s engine ought to maintain an excellent fit for them to contain all the pressure. It is also important to note that engine blow-by does not only occur in diesel engines, but it may also occur in as engines as well.

How to Check Engine Blow by?

It is effortless to make your blow by measuring tool. One of the recommended blow by tools is a tee with a 15/64-in outlet. One end of the tee is connected to the end of the blow-by tube. On the other end of the tee outlet, put a manometer. A simple manometer can be improvised by looping 6-feet of clear tubing into a ‘U’ with water in it. Measuring how high the water level rises using a tape measure, multiply the result by two, and then convert to LPMs. Roughly, 1” = 27 lpm.

Another easy way is blocking the blow by tube with a 0.5” pipe nipple with a cap. The cap should have a 15/64 hole drilled. Use a 3/8” id clear tubing with water inside slipped over an oil dipstick tube. The other tubing end ought to remain open — Mark out the water level using a sharp-tipped marker while the engine is turned off. A helper should help you start an already warm engine and then run the RPMs while marking at each stage, up to 2.2, 2.5, and 2.8k RPMs. Measure the distances from the first engine off the mark and then multiply each of the results by two.

You have to know how much blow-by is normal to know when your engine is not efficiently functioning.

A vehicle or motorcycle engine blow-by is not easy to tell, but there are specific symptoms that could tell you if your vehicle is suffering from a blow-by. The symptoms are just as different as the causes. Just because your automotive may have one or more of these sins, it does not mean that your vehicle’s engine is blown

A blue cloud of smoke blowing from the exhaust pipe may be a sign that your vehicle’s engine is blown up. This symptom is an indicator that some of the raw engine oil is getting dumped into the chamber where combustion takes place.

Yet another blow by symptom is the emission of white fumes from your vehicle’s tailpipe. White fumes show that either water or engine coolant may be entering the combustion chamber. This exhaust fume is usually dense, and unlike usual fumes, it hangs in the air.

3.   Knocking or A Rattling Engine

In case you hear some internal engine noises while it is running, this is a red flag indicating that something has gone terribly wrong. It is commonly caused by broken parts or worn out bearings. In most cases, there is little hope for an engine that is knocking.

The cooling systems and engine oil are always kept sealed and in separate compartments in the engine. If you find that the engine oil in the coolant or vice versa, this could indicate a fatal internal problem that should be fixed promptly.

An engine may fail to start due to a variety of reasons. Among these reasons is a blown engine. If that were the case, an engine blow-by fix would be essential to ensure your vehicle is back to running efficiently.

Effects of Engine Blow By

Blow by affects most diesel engines. When the mixture of fuel and air escapes into the crankcase, pressure builds up, thus leading to a decrease in engine power. If the issue is not solved promptly, it leads to increased pressure that eventually destroys your engine.

In certain circumstances, the engine may knock or fail to start, which necessitates a replacement of the entire engine. A blown engine also leads to white or blue exhaust fumes, as this could mean that raw oil is being deposited into the combustion chamber.

Blow-by is also dangerous because it coats parts of the intake with both fuel and oil. After the cylinder walls and piston rings undergo degradation, more air, fuel, or moisture slips into the crankcase. This, in turn, prevents effective pushing of the piston down to enable the engine to produce enough output during the engine’s power stroke.

Most parts of an auto motive’s engine are made of metal; hence expansion occurs due to heat. A Subaru blow by inhibits the overall performance due to the loss of compression. Moreover, the engines produce more irritating noise and may exhaust fumes that move out through the engine vents.

Blown engines also have increased fuel consumption. When fluids such as fuel, air, and moisture sip into the crankcase, contamination occurs on the oil, causing dilution. In case there are any remnants of unburnt fuel, moisture, soot, gases, and Sulphur dioxide, they adhere to your engine’s compression chamber. These contaminants may cause extensive damage to your engine.

In simple terms, an engine blow-by decreases the efficiency of your engine, resulting in quite expensive and time-intensive repairs. In the long run, if not promptly acted on, the result may be irreparable damage. Thus it is advisable to ensure proper maintenance of your engine to prevent a blow-by from occurring.

A blow by decreases the efficiency by increasing the consumption of fuel and oil in the engine. Many a time, the entire engine has to be taken apart in order to solve the issue. However, there are certain things you could do to enable your motor vehicle to run for a while longer.

You do not have to buy a new engine if it suffers from a blow-by. One of the most effective engine blow-by the fix is flushing an oil concentrate that cleans the engine. The oil concentrate is usually mixed with a hard-baked carbon. The mixture is run via the engine’s movable parts. It helps remove the engine sludge and effectively reduces blow-by and smoke, restores compression, and frees the piston rings.

Oil treatment helps reduce blow-by. As your vehicle’s engine ages, gaps are created in the movable parts. Combustion gases tend to leak from piston rings. This improves the engine’s performance.

While performing an oil treatment, you should avoid doing it if the engine is still hot. Also, ensure that the car is in parking gear and that the emergency brake is on. after you put the oil in the oil filter, start the engine and allow it to idle for a few minutes.

An FTC Decarbonizer is also used to fix engine blow-by for diesel-driven vehicles. It is added into the diesel at every fill, and then you just drive the engine clean. The process of decarbonizing is quite gentle, progressive, and very efficient. It also cleans DPFs and turbos. The more a blow by is ignored, the more and more carbon accumulates in your engine. Excessive carbon leads to rapid wear. When you clean up the engine and maintain it that way, the risk of engine failure becomes almost insignificant!

If your vehicle blow-by problem not resolve so it would be better to replace the piston rings or overhaul the Engine. This is the final treatment of your vehicle.

Blow-by is one of the common issues that face your engine among other engine problems. They generally reduce the performance of your engine. You may try accelerating, but due to engine blow-by, it may not peak as before. Usually, you have to sort the issue out before it is too late.

In the long run, you may have to find a way to prevent blow-by from occurring because prevention is always better than cure. Hopefully, this guide has been great at imparting knowledge about blow-by.

link to The 5 Types of Welding Joints

Continue Reading
link to Most Common Types of Welding Machines

Did you know that welding has been around for centuries? What about the types of welding machines? Dating back to the Bronze and Iron Ages, welding has become a part of our lives that it’s stated...