It is common knowledge in the auto-mechanic scene that the engine needs air and fuel to run. There are two systems through which it ensures this; via the carburetor or fuel injection. This leads us to the main discussion in this article, carburetor vs. fuel injection. Carburetors were the standard in most vehicles in the 20th century, but fuel injection made a firm entry into the scene by the turn of the century.

If you want to up your mechanic knowledge, understanding the mechanism of air and fuel supply and their mixture is essential. We will take you down the carburetor vs. fuel injection talk-over to give you an exact starting point in grasping the fuel and air aspect of the engine.

History: The history of the carburetor dates back to 1826 when Samuel Morey invented it. The carburetor’s applications started being profound as the age of automobiles dawned in the last quarter of the 1800s. At this timeframe, there was a patent for the carburetor for use in a petrol engine by Siegfried Marcus. Karl Benz also patented his designs during this time. 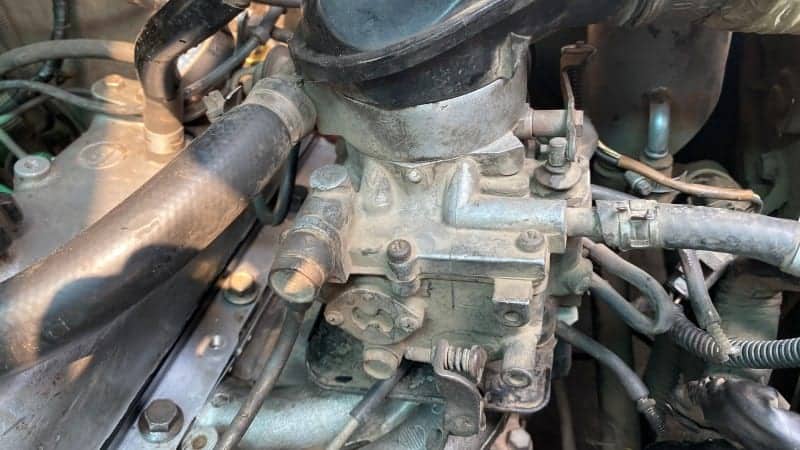 The earlier versions of this device were on the surface. The surface design allowed fuel to mix with passing air. As earlier mentioned, the carburetor was a mainstay in automobile technology for over a century after its debut and use in motor vehicles. However, by the 1980s, there was a need for change from the carburetion system due to its inefficiency in emission control. Most vehicles manufactured past the 80s shifted to the fuel injection system. Despite the shift from the carburetor to fuel injection, some cars featured this system, especially in the auto-sport scene.

NASCAR vehicles spotted carburetors until the early 2010s. The device still finds use in motorcycles and small machinery like the lawnmower.

How the Carburetor Functions: One of the impressive things about the carburetor is its functionality. It works like a tube that brings in air to the engine to mix with the fuel. There is an essential structure in the carburetor’s tubes, the venturi.  This structure works by and upholds Bernoulli’s principle. If there is a high air velocity, it creates a low pressure, which helps in drawing liquid to the chamber. The fluid, in this instance, is fuel.  Near the venturi is a fuel jet, which on low pressure creates lets in fuel.

While this is a great concept, the issue comes in monitoring the fuel. It is mostly an approximation when it comes to fuel intake for the air-fuel mixture; hence, the limit may vary. At times the variation may be high, taking in a lot of fuel and making the carburetor system inefficient when it comes to fuel consumption.

The carburetor has several advantages that made it a mainstay in the auto world. One of its main advantages is that it is very durable and will work for a long time. This is one of the main reasons that you find it prevalent in motor-sporting. It is also easy to install and maintain, and unlike the fuel injection system, it does not require wiring.

When it comes to maintenance, you can easily pull out the carb and use your carb cleaner or brake cleaner to have it in good shape. The carburetor is cheaper and easier to tune, which may explain its extensive use in sports. It is also affordable to buy.

The carburetor performs well with the right mods, something you notice in racecars that still rely on this system.

One of the main disadvantages of the carburetor lies in emissions. The carburetor’s air-fuel mixture is not precisely proportionate, which leads to increased emissions. This is the main reason for the shift to a fuel injection system, which is cleaner.

The lack of precision in fuel feeding makes this system poor in fuel economy.  This situation may lead to secondary issues like improper combustion, and the engine will knock if it is severe. The carburetor system in an engine may also bring up some problems like engine vibrations.

Shifting our attention to the other side of the debate, we have the fuel injection system. It is common in most new vehicle models. Fuel injection replaced carburetors towards the end of the 20th century due to the many advantages it presented. 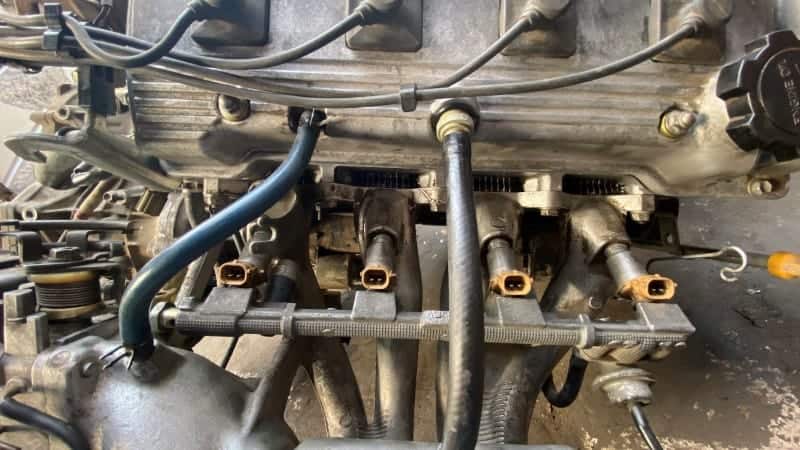 A Brief History of Fuel Injection: The fuel injection system had been around since the 1880s, but it was quite complex, which delayed its adoption into motor vehicles. It made its debut in the 1920s featuring diesel engines. Mass production of fuel-injected passenger vehicles began in the 1930s. Engineers and industry pundits noticed how efficient it was in fuel consumption.

In the 1950s, fuel injection made its way to petrol engines and gained immense popularity that it became the standard system replacing carburetors. The move towards emission control in the 1980s contributed to its popularity, as the system showed reduced exhaust gas emissions. The use of electric controls in the engine also helped in the mainstream appeal of fuel injection.

Fuel Injection Functionality: Fuel injection works by atomizing fuel through a jet, with the fuel being under high pressure. The engine’s electrical control unit helps regulate the supplied fuel, to ensure a proportionate air-fuel mixture.

The fuel injection advantage results from its precision in mixing air and fuel. The result is the fuel burns well, doing away with issues to do with emission. Fuel injection relies on car sensors, which help ensure that there is the right value of fuel and air mixing. This brings about an excellent fuel economy, meaning you won’t spend much on fuel.

Fuel injection also guarantees you a sharper throttle response. It results in smooth acceleration and the driving experience in general. Maintenance is relatively straightforward, and the system is durable, meaning it will serve you for a long time.

Despite the many advantages of fuel injection, it also has its downsides. One of them is that it is costly, from acquisition to installation. Talking about installation, this system is hard to install and needs immense skill to install. A simple mechanics toolbox is not adequate to cater to its installation, maintenance, and repairs.

Another low point of the fuel injection system is that you cannot customize it.

The fuel injector system brings its best when it comes to vehicle performance. It supplies fuel in precision according to the incoming air. The engine control unit, working with car sensors, makes sure that there is the right amount of fuel entering the engine as per the air intake. The result is a proportionate mixture, which brings about excellent vehicle performance.

When it comes to carburetor vs. fuel injection for racing, the carburetor system comes out on top. The carb is more favored in the auto-sporting scene as it is durable, easy to maintain, and customizable.

Another essential aspect to look at when it comes to the carburetor vs. fuel injection debate is fuel economy. Fuel consumption is the main point of focus as you try to determine which one is the best. The carb comes short in fuel economy, where it may consume more. The higher consumption is due to the slight error that comes in mixing fuel and air. The room for error may lead to an excessive supply of fuel. The fuel and air ratio is not very accurate and can lead to secondary issues like dirty gas in the tank.

Fuel injection sees that fuel and air mix correctly, resulting in proper combustion. The fuel injection unit is excellent for the environment due to low emissions and is one reason many vehicles took to this system.

From the above points, we can comfortably answer the question, carburetor vs. fuel injection, which is best. We can see that fuel injection comes on top of the carburetor in most instances.

Q: Which One Is Better, Carburetor Or Fuel Injection?

Ans: A look at carburetor vs. fuel injection pros and cons, you can see that each of them has its selling points and downsides. In most cases, fuel injection seems better due to its functionality, where air and fuel mix accurately. The result is a good fuel economy and fewer emissions.

The carb also has significant points like durability and ease of installation, repairs, and maintenance. Back to the question, fuel injection is the best, evident by its high rate of adoption in motor vehicles.

Ans: When focusing on reliability, you have to look at various aspects. You will find that fuel injection ticks a lot of boxes in reliability than a carburetor. Among the crucial elements where fuel injection is better than carb include fuel economy and emissions. Carburetor takes the top spot in areas like durability, ease of installation, and modifications.

Q: How Do I Know If I Have A Carburetor Or Fuel Injection?

Ans: You can check on your vehicle’s manufacturing date to get a hint if it is carb or fuel injected. If the year of manufacture is newer than the 1980s for US, Canada, and European cars, there is a high chance that it relies on fuel injection. You can also open the hood and check on its features to be certain. One of the components to review is the choke knob, which looks like a lever, and only appears on carbureted engines.

Q: Can You Replace Carburetor With Fuel Injection?

Ans: Yes, you can replace your carb with fuel injection. This process is fuel injection conversion and requires you to remove the carb and introduce the fuel injection system. It is usually a complex process, which if you do not understand, you should leave to professionals.

Q: How Much Does It Cost To Change A Carburetor To Fuel Injection?

Ans: If you want to go fuel injection on your car, you should expect relatively higher costs for the entire conversion. Getting the fuel injection kit may set you back by $800 to $1000. Then there are labor costs which depend on where you go for the service, though the average is $100. In short, you need to have around $1200 to pull the carburetor to fuel injection conversion comfortably.

Despite its downsides, it is common in smaller engines like motorcycles and lawnmowers. Classic cars and vehicles in the sports scene also use the carburetor.

link to What Temperature Does Diesel Freeze At?

Driving in summer can be extremely fun-filled until winter shows up. The cold temperatures during winter pose a serious challenge to virtually all vehicles, especially those with diesel engines. This...

Continue Reading
link to Oil in Gas Tank May be a Mistake, Need, or Hostile Act – What to Do

Oil could enter your gas tank for several reasons. Surprisingly, while oil in gas tank could get many drivers worried, others see it as a way of having a better running engine. Generally, several...