Flywheels play a vital role in the proper operations of a vehicle. Different vehicle make and models come with either a single flywheel or a dual-mass flywheel.

These two are found in manual transmission vehicles, especially diesel engines and petrol engines with high torque output. Most car owners do not know what a DMF is and how the component functions.

Therefore, the meaning, operations, pros, and cons of a DMF have been explained in the subsequent sections of this article. Kindly take a moment to digest the following information in the sections below.

What Is a Dual-mass Flywheel?

A dual mass flywheel is a mechanical device with two distinct parts separated from each other. The component is designed with one of the parts (primary mass) attached to the rear of the vehicle’s crankshaft.

The other part of the DMF (secondary mass) is attached to the flywheel’s primary mass. This part rotates independently of the secondary mass by means of either a bearing or a bushing. The differential rotation of the two parts is cushioned by a set of springs.

The springs in the DMF help to dampen the vibrations, harshness, and noise produced from the flywheel operations. So, if you were asking, “How does a dual-mass flywheel work?” It is quite different from a single flywheel that is characterized by constant noise, vibrations, and harshness. 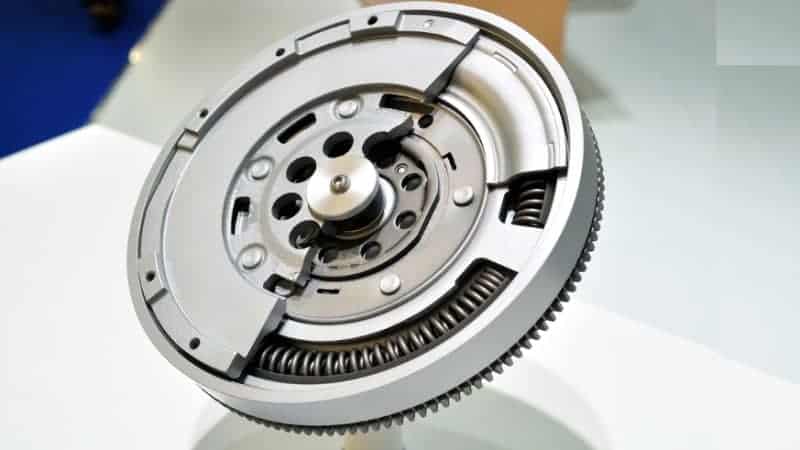 How Do Dual Mass Flywheels Work?

Dual mass flywheels are uniquely designed in manual transmission vehicles to provide and maintain contact between the engine and the clutch assembly.

When you’re driving, the DMF with its pressure plate, friction disc, and other unique parts work in synergy with the clutch assembly to maintain contact with the engine for proper transmission.

The process generates noise and vibrations from the engine. In order to curb the inconveniences from this inevitable occurrence, the spring within the dual-mass flywheel helps to dampen the vibrations, thereby minimizing the noise from the engine.

This component is extremely important in vehicles with manual transmission. However, it is relatively more expensive than the regular single-piece flywheel. Nevertheless, the component has its pros and cons that merit attention before going for it.

The main advantage of a dual-mass flywheel is the protection it provides for a manual transmission vehicle’s gearbox against constant engine vibrations that can lead to damage. In other words, the component protects the gearbox from unexpected damage.

Besides the protection against vibrations, the component also enhances a car’s fuel economy, smooth clutch operation, and improves gear-shifting.

Unfortunately, irrespective of the high replacement cost, DMF sometimes do not reach their lifespan. While the ideal lifespan of the component is between 150,000 and 200,000 km, some brands do not exceed 50,000 km before manifesting the symptoms of a worn dual mass flywheel. 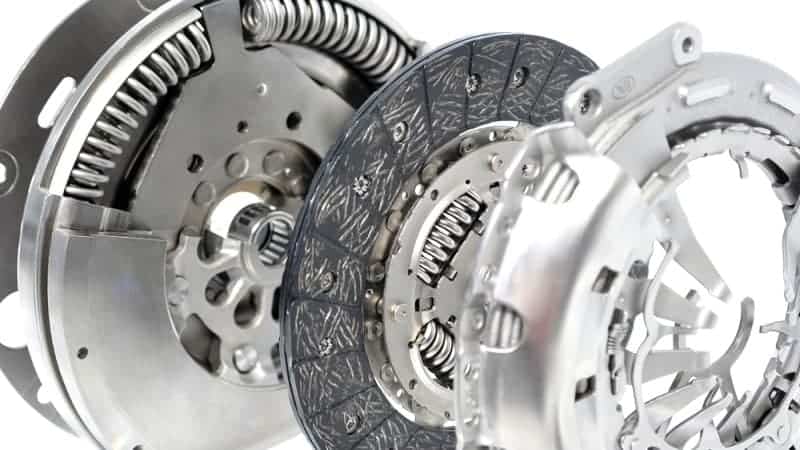 Q: What is the purpose of a dual-mass flywheel?

The dual-mass flywheel (DMF) isolates a car’s torsional vibration that is generated within the engine. This isolation prevents the transmission of the vibration into the drivetrain. The DMF is responsible for transmitting the torque to the vehicle’s clutch pressure plate and clutch disk.

Your vehicle’s DMF is the reason for the smooth operations between the clutch assembly and the engine. It dampens the vibrations, noise, and harshness of the operation.

In other words, driving with a defective dual mass flywheel will alter the smoothness of the operation and produce unpleasant vibrations, noise, and harshness. In this case, you need a dual-mass flywheel replacement.

Q: Which is better dual mass flywheel or solid flywheel?

Dual mass flywheel engenders improved gear-shifting, smoother clutch operation, improved fuel economy, and a general reduction in the vibration of vehicle components. On the other hand, solid flywheel engenders quicker engine revving, and they are cheaper to buy.

A solid flywheel also requires less power to spin it up compared to a dual-mass flywheel. However, the major challenge with a solid flywheel is the hardness, vibrations, and noise it produces during operations.

This problem can be disturbing when driving. In that case, if you’re contemplating dual mass flywheel vs. solid flywheel, DMF is better.

Q: How do I know if I have a dual-mass flywheel?

The simplest way to know whether your car has a dual mass flywheel is to look out for the springs on the flywheel. They are not found on the clutch disc as in the case of a single mass flywheel.

A car with a dual-mass flywheel comes with two separate flywheels, which are completely independent of each other. One of the flywheels is attached to the car’s crankshaft, while the other serves as a friction surface for establishing contact with the clutch.

The component also has some springs that help to dampen the car’s engine vibrations and prevent its torque spikes from the gearbox. So, ensure to check out the physical appearance and the operations of your vehicle’s flywheel to know whether it’s a DMF.

Q: Why do cars have dual-mass flywheels?

The DMF is fitted on the crankshaft’s end, with the other part as a friction surface for establishing contact with the clutch. Most diesel engines and petrol engines with high torque output come with dual-mass flywheels.

Q: Should I change DMF with clutch?

Of course, it would be best to change DMF with the clutch. The dual-mass flywheels eventually wear out with a vehicle’s clutch because of their contact.

However, if your car’s DMF has attained about 80,000 to 90,000 miles, it is only wise to replace the component alongside the clutch. This is a way to save your time, energy, and money.

A vehicle’s dual-mass flywheel lifespan is about 150,000 to 200,000 km depending on a car owner’s driving style. Most vehicle components do not reach their lifespan due to poor driving style, bad roads, and weather conditions.

Hence, it is advisable to perform regular maintenance on your car at intervals according to expert recommendations from your car manufacturer’s manual. This will help you avoid dual mass flywheel problems in the long run.

Meanwhile, proper driving style can enhance the lifespan of your vehicle’s DMF, especially when it has to do with stop and go driving at a traffic point.

Q: Does an automatic car have a DMF?

If you drive an automatic transmission car, you don’t have to bother about issues concerning dual-mass flywheels malfunctions because you won’t see them. Only manual transmission cars need adequate DMF maintenance with a careful driving style to keep them working fine.

However, when a vehicle’s DMF becomes noisy, producing unnecessary vibrations, it is most likely a result of a malfunction. At this point, kindly contact an expert auto mechanic for the dual mass flywheel repair.

Vital information about the meaning, operations, as well as pros and cons of a dual-mass flywheel has been unveiled in this article. Understanding how these component works are fundamental to its longevity.

Although the component is expected to run for around 150,000 to 200,000 km, your driving style has a long way to go in the fulfillment or limitation of its lifespan.

So, kindly ensure to imbibe an excellent driving style and a regular maintenance culture to help the DMF operate efficiently.