Most car owners and drivers are used to engaging the footbrake when slowing down their car under normal conditions and in an emergency. But this process is not actually the best if you want your vehicle to last its lifespan.

Would you prefer to drive your car with the general assumptions of how its components should be engaged and end up damaging the car? I’m sure you don’t want that!

What Is Engine Braking? 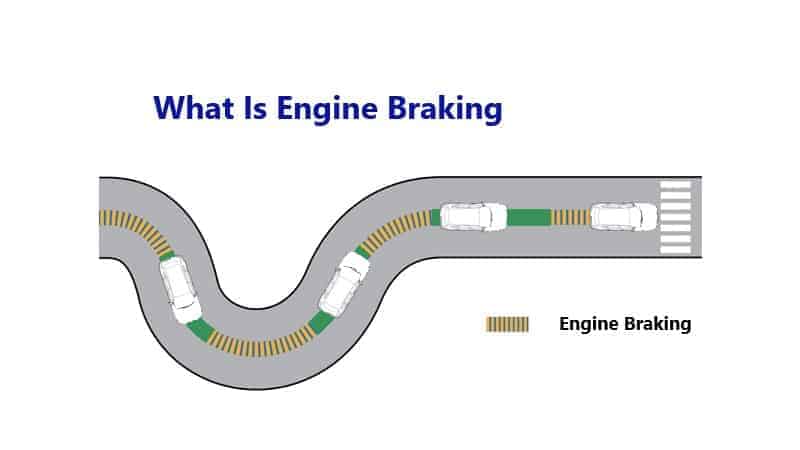 Engine braking is the process whereby you slow down your car by disengaging the accelerator and shifting the gears down through the sequential order instead of directly engaging the footbrake.

It technically means decelerating your car’s engine power to slow down the speed that rotates the wheels. This should be the proper order to slow down your car from high speed and eventually stop the vehicle. For those asking, “What is engine braking in a motorcycle?” They function just like.

Most people are used to directly applying the footbrake because it seems to be the fastest means (shortcut) of slowing down and stopping the car, especially in an emergency. But this process is wrong because you will be damaging your car’s transmission, brake pads, and other parts in the process. Kindly take a look at how engine braking works below, especially for those asking, “What is engine braking in an automatic transmission?”

How Does Engine Braking Work?

Engine braking is pretty simple in manual cars, but it may be rather tricky for “Newbies” to learn and master the process of how to engine brake while they are still struggling with understanding how to shift gears.

Engine braking works in a way such that when you are driving at high speed on any of the high gears (4th or 5th), and you are approaching a place where you have to slow down, especially in traffic; you will have to release your foot from the accelerator and shift down to a lower gear.

As you rev-match in the shifting process, you will need to move from 5th to 4th or from 4th to 3rd. Then, the car will slow down without you applying the brake directly. After that, you can use the clutch and brake approach to stop the car finally. This helps you prevent various challenges such as brake pad wear, gearbox damage, etc.

Most cars, especially the modern ones, are equipped with computerized systems that display any challenges that need to be attended to by the car owner; one of those challenges is engine braking failure.

Engine braking failure does not happen automatically; it can be caused by one or more of the following.

Many things could lead to your car’s engine stalling. Lack of fuel, a dead alternator, defective coolant sensor, or forgetting to depress your car’s clutch or switching to neutral when stopping your vehicle could make the engine stall, among other reasons. In any case, if your car’s engine consistently stalls, you will most likely experience engine braking failure.

Engine braking is a necessary operation that you ought to be used to as a car owner. However, take a look at some of the pros and cons of the operation. The pros include the following.

When Is Engine Braking Better Than Normal Braking?

Engine braking may not be regularly engaged under normal driving conditions, as it is easier, faster, and safer to apply footbrake directly. However, engine braking is still recommended if you want to prevent your car’s braking system’s components from quick wear.

Meanwhile, there are rare occasions that necessitate the use of engine braking for safer and more efficient braking operations while ensuring the protection of the brake system’s components. These situations include:

Driving in ice or snow

Relying on your car’s footbrake when driving in snow or ice may not be the best as it may suddenly lock your car’s wheels and still have them sliding in the snow because the road is slippery.

You will need to engage engine braking to ensure that the wheels are turning with the right balance as you engage the optimum gear level, preferably gear 2, because this helps to prevent the wheels from spinning.

Also, endeavor to give a reasonable distance from any car in front of you, and be conscious of any obstacle that may require you to engage the engine braking operation for safety swiftly.

Suppose you have any occasion to drive downhill for a long time. In that case, you certainly do not need to use your car’s footbrake in slowing down consistently because consistently using the footbrake will lead to reduced friction or overheating. Any of these can be disastrous.

Therefore, it would be best to use an engine braking approach while driving down a steep hill. In doing this, ensure to shift gear down to a lower gear, with gear 2 being the optimum. This will reduce speed and allow you to apply the brakes as you descend the hill seamlessly. 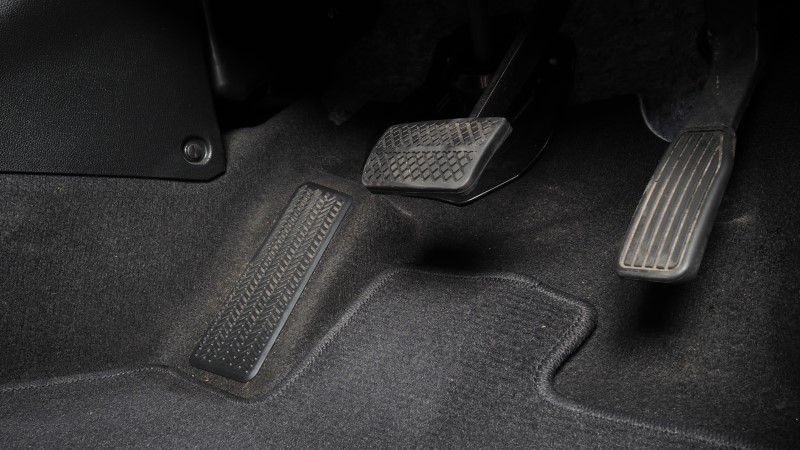 Engine braking is not bad for your car; neither does it affect your car’s transmission, its engine life, or result in fuel wastage. Engine braking ensures that your car’s engine slows down the wheels without using the actual brakes.

However, you must endeavor to perform engine braking correctly without shifting very frequently so that it doesn’t result in the wear of your car’s transmission if you drive a vehicle with a manual transmission. It could also result in a high temperature for those who drive automatic transmission cars.

Q: Can I brake without a clutch?

If you are considering engine braking vs. clutch braking, you can possibly brake without pressing down the clutch, especially in traffic. When you approach traffic, or you need to slow down your car in any case and stop, you could release the gas pedal and brake directly without engaging the clutch.

It is typical to clutch down when changing gears; this helps to disengage the gears and engine from its wheels. As a matter of fact, keeping your clutch down unnecessarily can alter a driving test. It is referred to as “Coasting.” It reduces control and your ability to brake your vehicle’s engine while driving.

Q: What happens if you don’t break your engine?

Breaking in your car’s engine is necessary if you must minimize early wear in the engine. It helps to ensure that your car’s bearings and other moving parts settle altogether and gradually ears evenly.

If you don’t break your engine, you could have piston rings that do not seat appropriately, and your car will burn oil. You could have your car’s camshaft lobes wear out incorrectly, resulting in valve opening and closing within the wrong timing and speed.

Q: Why do I have no engine braking sign?

If you experience a situation whereby your vehicle does not project an engine braking sign, especially if you drive a truck; then, it is a warning against using your engine to brake. Engine braking in trucks usually produces loud noises when the driver downshifts the engine to enable the vehicle to slow down without the brake being applied.

Q: What happens if you press the brake without a clutch?

Pressing the brake to slow down your vehicle and eventually stop without first pressing down the clutch is possible. However, the clutch ought to be pressed down to disengage the power from your car’s engine to the gearbox so that the brake can seize the rotation of the wheels with any more force coming from the engine.

Meanwhile, if you press the brake without the clutch, you would be slowing down or stopping your car’s wheels without disengaging the power from the engine to the gearbox, leading to the wheels receiving some more force to rotate, even though you are braking. This situation can quickly damage your car’s gearbox if consistently repeated.

Q: What is the difference between an engine brake and an exhaust brake?

Engine brake releases compressed air via an exhaust valve when engaged; while, the exhaust brake holds the compressed air in the car’s engine when slowing down the rotation of the crankshaft, thereby reducing speed. You may want to find out exhaust brake disadvantages.

Henceforth, it would be best if you master the act of engaging engine braking when necessary, instead of sticking to constantly directly applying your car’s footbrake. If you do this, you will be saving your car’s gearbox and other braking components from being damaged early enough.