If you learn to drive with a manual transmission car, electric vehicles will be strange to you. Not only does most of it have single-speed gear, but it also has no gear shifter.

If you get into an electric car for the first time, you’ll notice the car does not have a gear stick or gear lever, allowing you to shift between different gear ranges. The manufacturers designed it with an accelerator (not a gas pedal), and when you step on it, you won’t feel any gear shifting.

That said, do electric cars have gearboxes, anyway? How many gears does an electric car have?

The answer to these questions depends on who you ask. If you peruse authority automotive websites, you’ll find different answers like ‘no transmission,’ ‘2-speed transmission in electric vehicles,’ to ‘one gear.’ In this article, we’ll get straight to the point and straighten out what powers electric cars. 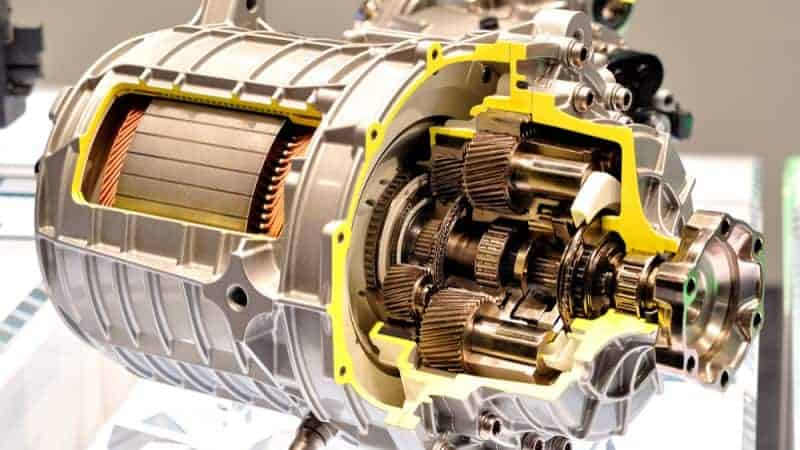 Before we drive into the main context of this section, let’s define a transmission.  A transmission is a mechanical unit that transmits power or multiple torques. So, in this engineering-mechanical sense, every car has a transmission.

One of the most distinguishing features of an EV is its instantaneous, quiet, and smooth acceleration. This is because electric vehicles’ propulsion works differently from ICE vehicles.

The major difference between EVs and ICE vehicles is their fuel source. When you depress the accelerator on an EV, it sent the electric current from the battery to the electric motor, creating a rapid spinning.

Most electric cars have a single alternating current (AC) motor fixed to a gearbox.

Unlike ICE transmissions that have multiple gear sets that spin at different intervals, electric vehicle transmission is more accurately called a single-speed gear reduction unit, since all the gears are connected and turn at the same time.

The single-speed gear reduction unit reduces the motor’s RPM to a more reasonable rate, which will drive the wheels to roughly 10 to 1. That said, there’s no clutch, no engaging and disengaging of clutches, no shifting of different gear ranges – depending on the speed you’re traveling at.

Rotational forces pass directly and instantaneously from the gearbox to the wheels, and speed transition has nothing to do with gear shifting from one to another range, giving smooth acceleration.

The absence of multiple gear sets halts the friction (wear and tear) of engaging and disengaging clutches.

Overall, EVs convert 77% of electrical current stored on the battery to power the vehicle to move forward efficiently, while gasoline-powered vehicles convert 12% to 30% of power stored in the gas tank to move the car forward. And, it wastes much of the gasoline as heat.

How many gears does an electric car have?

As suggested above, electric cars don’t have gears; they don’t have clutches, too. Electric vehicles don’t feature multi-speed transmissions like conventional gasoline-powered or diesel-powered vehicles. Instead, they feature a single-speed gear (also known as gear reduction unit) because they produce higher RPM than standard ICE vehicles.

In internal combustion engines, the engine generates torque, which is used to speed up the vehicle, and power in a narrow band of gears or engine speeds. For the ICE vehicles to speed up, the engine must maintain the required torque and power.

The transmission gears allow the driver to keep the energy at an amount needed so you can efficiently speed up or slow down without losing the necessary torque to achieve this. The first gear can only keep a driver at low speed before the RPM becomes much and calls to shift to second gear.

In contrast, EVs generate all their torque at a low speed [even below 1,000 RPM]. As the RPM increases, the torque decreases, and so, it’s better to maintain a low RPM of around 2,000.

It doesn’t mean electric cars can’t have multiple gears. However, they are not needed to increase the car’s power or torque. 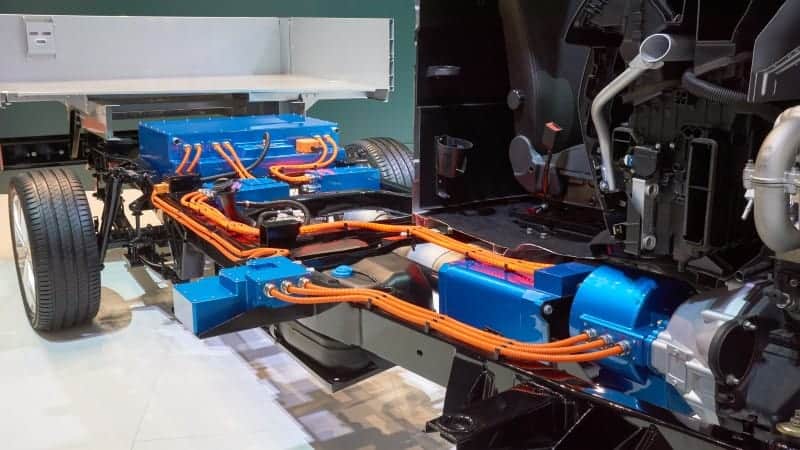 Q: How many gears does a Tesla have?

Tesla cars have only 17 moving components, while ICE vehicles have over 200. Tesla cars feature a single-speed transmission that doesn’t have rotating gears as opposed to conventional gasoline-powered cars with different speed ranges and multiple gears, which are bolted on the rear end of the crankshaft.

One reason Tesla cars have single-speed transmission is that they don’t need multiple gears to increase torque and power.

Q: Why do electric cars only have 1 gear?

Since electric cars don’t need a clutch, it doesn’t require gears. Most manufacturers do not equip most EVs with multi-speed transmissions like conventional gasoline-powered and diesel-powered vehicles. Instead, they feature one gear, referred to as a single-speed transmission. Why is it so, anyway? This is because they can achieve high RPM on low and high torque.

Q: Does a Tesla have a gearbox?

All Tesla vehicles feature a single-speed gear reduction unit (not a transmission) with a fixed ratio of 9:1. Since the motor can rotate backward (reserve) and at low speed and achieve up to 20,000 RPM and maximum torque at 0 RPM, no transmission is needed.

If you’re wondering, ‘do electric trucks have a transmission?’ From our definition of transmission, all vehicles have transmission. This means it is not wrong to call the gear reduction unit a single-speed transmission.

EV automakers equip electric cars with only three essential fluids; coolant fluids, windshield washer fluids, and brake fluids. These are only what most EVs use, but some differ. For instance, the Tesla Model S has a transmission fluid that needs replacement like a conventional gasoline-powered transmission.

Electric vehicles are leading the automotive industry regarding accessibility, ease of use, swift acceleration, and lower emissions.

If you were wondering, ‘how many gears does an electric car have’ this article has answered that. A quick recap is, that EVs come with single-speed gear, which makes them cheaper and means fewer components can damage in the long run.

We expect electric vehicle transmission manufacturers to make a production shift from single-speed gear to multi-speed transmissions for electric vehicles like Porches and Tesla. Thus, EV cars can provide a more efficient and enhanced driving experience.