Is brake fluid flammable? This is a question many car owners and those in the auto-mechanic sector, among other interested parties, may have. Brake fluid is flammable, and it will burn when exposed to fire. While it can burn, it burns at high temperatures; hence, it will rarely be the first cause of a fire hazard. Brake fluid is an important hydraulic fluid, which transfers power in several hydraulic systems like in the hydraulic brake and clutch systems.  It is non-compressible and has a fast air release capability, which makes it excellent for power transmission.

The constant viscosity also contributes to its preference as the ideal hydraulic fluid in the brake and clutch units. Brake fluid’s flammability may be a surprise to many, considering that it appears to be heavy and viscous. Let us look deeper into its flammability to get a clear picture.

To understand why and how brake fluid is flammable, you should look at its components. There are several brake fluid types, and they come in different tags depending on their main component. There are three models; these are DOT 3, DOT 4, and DOT 5. DOT 3 and DOT 4 are the same as they are both glycol-based, while DOT 5 is silicon-based. The DOT tag refers to the US Department of Transportation. There is also the DOT 5.1, which is glycol-based but has standards similar to the DOT 5 with properties of the silicon-based hydraulic fluids. 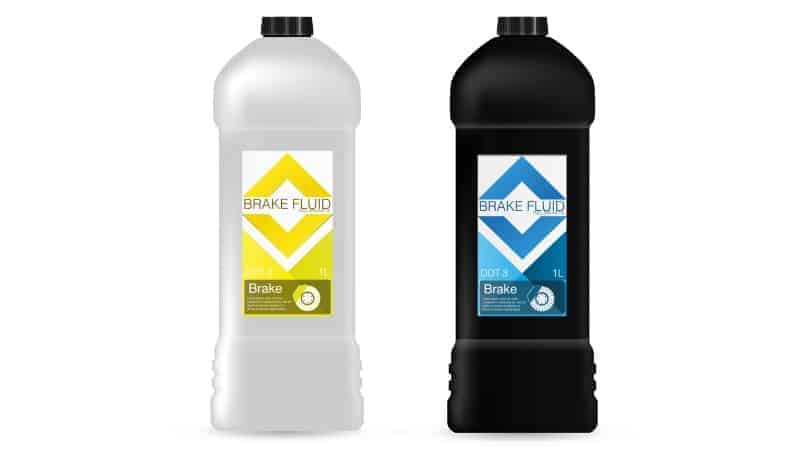 Can brake fluid cause fire? While it is flammable, it has a low ignition capability to make it a primary cause of fire. To understand its flammability value, you should look at its flashpoint, which is the temperature where a flammable substance becomes vapor and burns. The brake fluid flashpoint is very high at 210-375-degrees Fahrenheit, depending on the type. Brake fluid will not ignite under normal temperatures, as it has a high auto-ignition temperature of 540-675-degrees Fahrenheit.

Burning brake fluid on the exhaust manifold, in case of an accident will cause fire and can spread the burning to rubber parts. As such, you need to be careful when handling brake fluid near fire sources. Another thing to know about brake fluid is that it is fairly corrosive and toxic and can eat some metal parts. The glycol variety of these hydraulic fluids will peel off your car paint when it comes to contact.

Read Also: Can I Use Brake Fluid For Power Steering Fluid?

Looking at the corrosion level and its toxicity, you should know how to dispose of brake fluid. You should never pour used brake fluid in the toilet or latrine as it is hazardous waste, and it is recommendable to look for a waste handling facility to dispose of it. In case of a spill, you should wipe it off immediately as it may cause some minor corrosion or eat paint. Its toxicity makes it harmful if ingested.

You should handle it carefully and avoid exposing it to open fire sources, lest it starts burning.

What Is The Flashpoint Of Brake Fluid?

When looking at the flammability of various liquids, you should look at their flashpoint. Brake fluid has a flashpoint of 210-375 degrees Fahrenheit. The flashpoint is the temperature where a liquid turns into vapor capable of sustaining a flame. The brake fluid flashpoint is quite high, which means it is less flammable compared to other volatile flammable liquids like gasoline, which has a -40-degrees Fahrenheit value. The silicone-based DOT 5 brake fluid has a higher flash point, while the glycol-based has lower values; hence, they are more flammable.

DOT 4 is a polyglycol ether-based hydraulic fluid, and on exposure to high temperatures, it will burn. It has a flashpoint on the lower side of the 210-375-degrees Fahrenheit limit, meaning it will easily burn compared to the silicon-based varieties.

When exposed to temperatures of 540-675-degrees Fahrenheit, it will self-ignite.

Yes, DOT 3 brake fluid is flammable, as it is a glycol-based fluid. It has a boiling point of 250-degrees Celsius and is classified as moderately flammable, with a rating of 1. It has a low flash point of 230-degrees Fahrenheit, meaning it will easily ignite compared to other brake fluid varieties.

Can Brake Fluid Start A Fire?

Yes, brake fluid is flammable, and when exposed to high temperatures, it will cause a fire. As per tests, spraying DOT 3 brake fluid on a heated hose of 1000-degrees Fahrenheit caused the fire. Brake fluid will burn, but at lower intensity compared to other volatile fluids.

Does Chlorine And Brake Fluid Explode?

When you mix chlorine and brake, fluid an explosive reaction will occur that can create a ball of flame. If you use swimming pool chlorine, which is calcium hypochlorite, and mix it with brake fluid, you will notice a period of dormancy, followed by a hissing sound and an explosion with fire. Brake fluid is a glycol polymer and has a hydroxyl group, which chlorine oxidizes. Chlorine is a powerful oxidizing agent, and its power is the cause of the violent reaction.

The Science of Flaming Brake Fluid and Pool Chlorine YouTube

Brake fluid is a crucial component in the car’s clutch and braking system, playing a significant role in power transfer. Its viscosity and high boiling point are contributing factors behind its great performance as a hydraulic fluid. Is hydraulic fluid flammable? In the case of brake fluid, the answer is yes, as it is an ethyl-glycol derivative. You should be careful when handling brake fluid, especially if there is an open fire source or a heated element. It is also toxic and can corrode your paint. Know the different types of brake fluids and have the right one for your car.

A bubbling or boiling power steering fluid indicates a real problem in the system! Every vehicle is designed with several system components that use fluid to function correctly. Regardless of where...

Continue Reading
link to How to Read Dipstick?

Everyone who drives a vehicle should understand how to read dipsticks. Why? Because engine oil can be likened to blood, you need the right amount and the right type at every point in time. Too little...