Brake fluids are responsible for transmitting pressure from the brake lever to the brake pads. These fluids need to be non-compressible for them to transfer the force effectively. The best brake fluid should be able to lubricate the calipers, offer resistance to corrosion, and have a high boiling point. Brake fluid comes in four types. There are DOT 3, DOT 4, DOT 5.1, and DOT 5 brake fluids.  Brake fluids are subjected to an average amount of heat since brakes convert kinetic energy to heat.

However, it can only withstand a certain amount of heat before it starts to boil. When it boils, it will form air bubbles, and this will make it compressible, which will affect how the braking system works. DOT 3 and DOT 4 are the most common brake fluids used in automobiles. This comparison between the DOT 3 vs. DOT 4 brake fluids will help you to make the right decision on the one to use on your vehicle.

The most commonly used brake fluid today is DOT fluid. All the DOT fluids apart from the DOT 5 brake fluid are made of the poly-glycol base. Glycol-based brake fluids are a mixture of as many as ten ingredients making the final products. The substances can be broken into four major components, which include:

Inhibitors- They prevent oxidation and corrosion.

A Modifier-Coupler- This changes the number or intensity of swelling on the exposed rubber parts.

A Lubricant-Lubricant such as polypropylene or polythene keeps the parts moving freely from 20% to 40%.

DOT brake fluid meets stringent specifications and standards set by the Department of Transportation and the Society of Automotive Engineers. DOT gets its name from the Department of Transportation. The standards focus on maintaining the performance of brake fluids in both low and high temperatures. They also give specifications on the minimum boiling temperatures to which the manufacturers of the fluid should adhere.

What is DOT 3 Fluid? 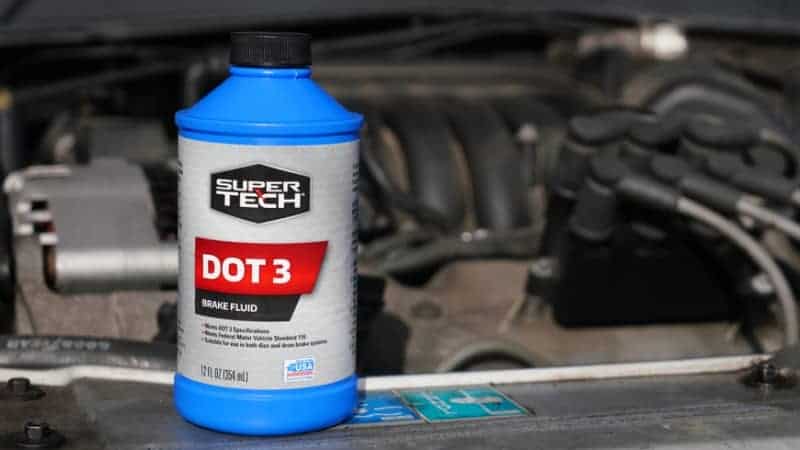 DOT 3 brake fluids are petroleum/non-mineral based, non-silicone, and fully synthetic brake fluids designed for use in a wide range of clutch and brake applications. It is made by mixing alcohol and glycerin. The brake fluid is based on polyethylene glycol ether technology for high performance.

The rubber component swell in DOT 3 brake fluid is minimal, thus reducing the loss of fluid and leakages. It also has excellent corrosion protection, which improves the reliability and life of the components in the brake system.

This brake fluid is suitable for top-ups or re-fills of clutch and brake systems in heavy-duty commercial vehicles, motorcycles, and 4WDs, and passenger cars. You can also use it on agricultural, construction, and mining equipment.

Use this brake fluid when the vehicle manufacturer specifies to use DOT 3 brake fluid. The fluid is naturally hygroscopic and absorbs water from the air, which lowers the effectiveness of the product. Once you open the brake fluid bottle, make sure you reseal the cap tightly to prevent it from getting contaminated with water.

What is DOT 4 Brake Fluid? 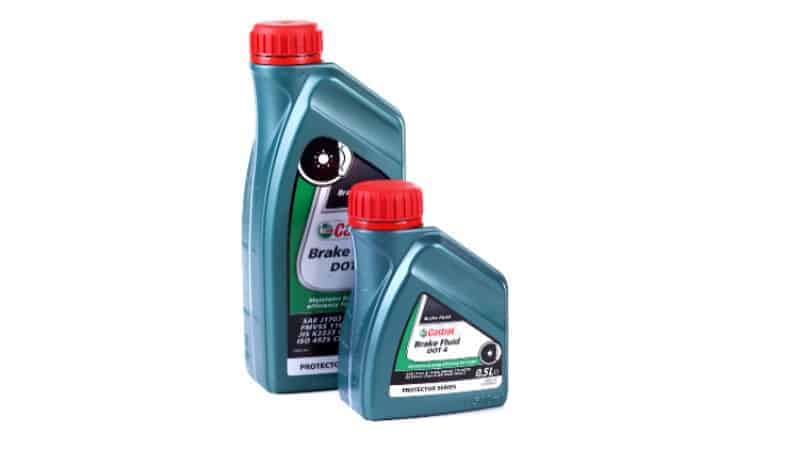 The boiling point of the brake fluids will decrease as they continue to absorb water from the air. If you fail to change brake fluids regularly, the wheel cylinders and master cylinder rubber parts will start corroding. You can mix DOT 4 with DOT 3 and DOT 5.1 without reducing performance or causing damage to the braking system since they are glycol-based.

However, even if it is safe to mix them, professionally, I would not advise you to combine them. DOT 4 is an alternative to DOT 3 but not the other way round. Make sure that you have flushed out all the brake fluid from the brake system before you fill the reservoir with another type of brake fluid. This brake fluid can withstand temperatures as much as 311 degrees.  DOT 4 has a viscosity of 1800 at 40 F.

What is DOT 5 Brake Fluid?

DOT 5 brake fluids are silicon fluid, and it is used in most modern cars. It is more expensive compared to others since it has a high bylining point. It has a dry boiling temperature of 356 degrees. Most of the new brake rotors are thin and small, and thus they disperse a lot of heat. This silicon-based brake fluid is ideal for this type of car since it can withstand high temperatures.

A DOT 5 brake fluid does not absorb moisture, and it does not cause any harm to painted surfaces. This brake fluid acts as a weather barrier to the brake system. DOT 5 can replace DOT 3 and DOT 4, but you should not mix it with any of the other brake fluids. Silicon-based brake systems are more difficult to bleed.

However, once they bleed, a brake system filled with DOT 5 brake fluid will resist rust better and also stay for a longer period than other formulations. This brake fluid is also lighter in cold temperatures. It weighs around 900 at 40 F. The viscosity of DOT 5 is much more stable in extreme temperatures. It is ideal and can be used in most external boots, and it is also compatible with all components of standard brakes.

DOT 5 brake fluids also have some drawbacks. It expands significantly when hot and the additives can vaporize at moderate temperatures, thus increasing the spongy feel. This fluid is incompatible with systems that have used glycol-based fluids before unless you flash it and have the seal replaced. It is also not compatible with anti-lock brakes wince the silicone fluids are more viscous. Unlike glycol fluids that start compressing when they near their boiling points, silicone brake fluids begin to compress when it gets to 300-350 degrees Fahrenheit. 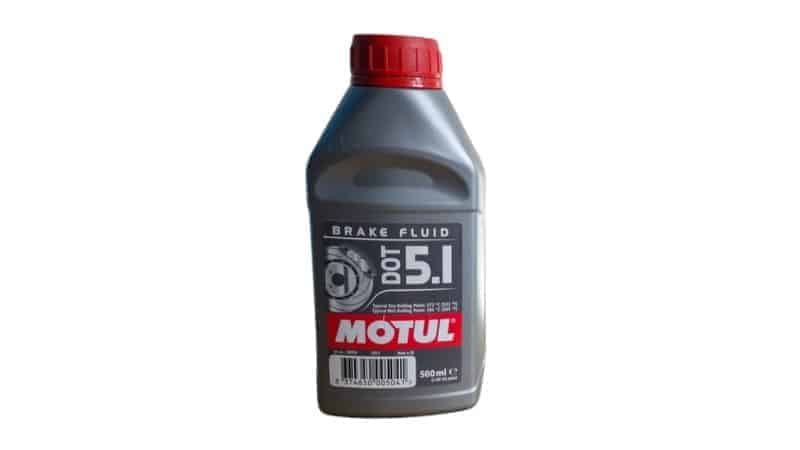 Most people think that DOT 5.1 is a modification of DOT 5, but that is not the case. DOT 5.1 is silicone-based, and it is a combination of borate ester and polyalkylene glycol ether. DOT 5.1 brake fluid sustains more heat than other DOT brake fluids without any mushy feelings. It can withstand higher dry and wet boiling temperatures and provides superior performance over all the other DOT brake fluids.  You can mix it with all the glycol-based brake fluids, but it is not compatible with DOT 5.

This fluid has a dry boiling temperature of around 275 Degrees Celsius, which is higher than that of a racing fluid. Another advantage of DOT 5.1 is that it is convertible with rubber formulations. It is also congenial with DOT 3 and DOT 4. It is, therefore, easy to make an upgrade from the other DOT 3 and DOT 4.

On the downside, DOT 5.1 will absorb water, it eats paints, and it is also more expensive than DOT 3 and DOT 4. This brake fluid is also challenging to find it is some auto parts stores. The brake fluid is not compatible with DOT 5, and you should never mix it for whichever reason.

DOT 3 brake fluid is a more popular type of brake fluid for cars and trucks. It is low cost and a standard option for average cars where the driver is not likely to engage in vigorous braking actions. DOT 4 is also gaining popularity due to its compatibility with traction control and anti-lock braking systems. It is ideal for police and racing cars that need vigorous braking to use mush regularly. Below are some other differences between the DOT 3 vs. DOT 4:

The chemical components in DOT 3 vs. DOT 4 have a slight difference. DOT 3 is made by blending polyalkylene and ether, while DOT 4 is a mixture of borate and glycol. The glycol-ether holds quite well in wet and hot conditions, which makes it a perfect choice for regular vehicles. DOT 4, on the other hand, has a high tolerance to water and is stable under high temperatures.

The major difference between DOT 3 vs. DOT 4 fluids is their boiling points. DOT 3 has a lower boiling point, and thus it assimilates water more easily. It, therefore, boils faster when put under rough and hard braking, and this could damage the braking systems. DOT 4 has a higher boiling point. It is an alternative to DOT 3 brake fluid, but the latter cannot be used in place of the former. 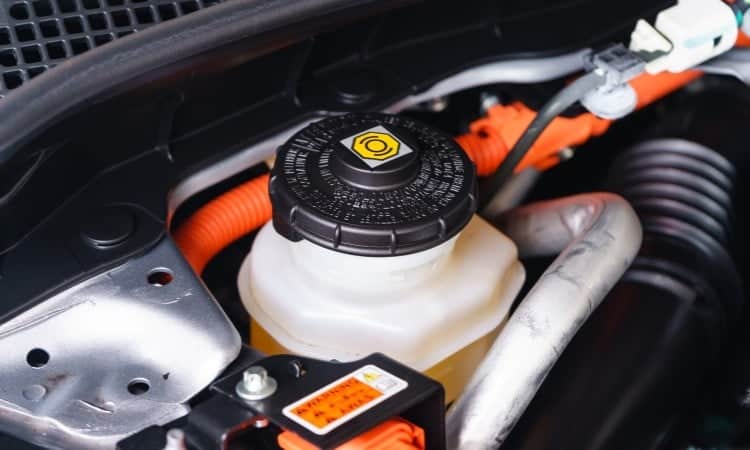 Ans: Mixing DOT 3 and DOT 4 will give you an unpredictable boiling performance, which should not cause any harm. These brake fluids are compatible with one another, and thus there is no problem in mixing them. The difference between the two is minimal. However, professionally, I would advise you to use one or the other instead of mixing.

Q: When Should I Use DOT 4 Brake Fluid?

Ans: You can use DOT 4 brake fluid if you want to upgrade from DOT 3. DOT 4 has a high boiling point, and thus it is ideal for cars that engage in vigorous break actions like motorcycles, racing cars, and police vehicles. It is also compatible with cars using anti-lock braking systems. It is advisable to use the DOT 4 brake fluid if the car manufacturer suggests so.

Q: Are All DOT 4 Brake Fluids The Same?

Ans: All DOT 4 fluids are synthetic brake fluids, and their chemical composition is the same. All DOT 4 brake fluids have the same wet and dry boiling points, and thus you can use any depending on your preference. They are a blend of borate ester and glycol.

It is very important to follow the recommendations given by your car manufacturer in the manual. You can upgrade from DOT 3 to DOT 4 to DOT 5.1. These brake fluids are glycol-based. DOT 5 brake fluids are silicone-based, and you should not mix them with other fluids. This brake fluid was mainly made for military vehicles. Ensure that you use the right type of brake fluid for your vehicle to maintain safety.