The crossover SUV market has some of the most impressive models that give passengers a taste of luxury and smooth driving. In this vein, we look at the RDX vs. MDX discussion. The two are Acura models, Honda’s luxury car division.

Which of the two is the best, what are their features and performance? These are questions that many people have when picking between the two. If you have similar questions, you are in the right place. Stick on as we take an in-depth focus on Acura RDX vs. MDX. 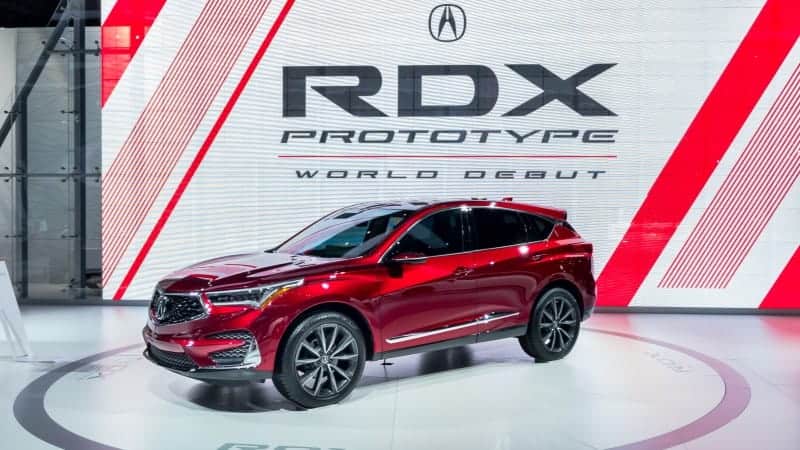 We start our discourse by looking at the Acura RDX. According to the manufacturer, the RDX is its first compact luxury crossover utility vehicle. Production began in 2006 for the 2007 model. Presently, the production is on the third generation, which started with the production of the 2019 model.

When it first came out, the RDX used the platform used on the Honda Civic and CR-V. The third-generation cars use the Acura RDX platform. The first-generation RDX sported a 2.3-liter, straight-4 turbocharged engine under its hood.

The gasoline-powered engine is capable of a 240-braking horsepower and 260-pounds per foot of torque.

The first-generation RDX had amazing safety features, such as the Advanced Compatibility Engineering body. This body structure absorbs energy upon a collision. Additionally, the car had six airbags.

The second-generation RDX debuted in 2012 for the 2013 model year. It is an upgrade of the first generation. Notable improvements include larger engines. There were two engines, a 3-liter V6 engine, which was available in the Chinese market, capable of a 263-horsepower.

There was the standard 3.5-liter V6 engine, available in most markets, with a 273-horsepower rating. Both had a 6-speed automatic transmission with a choice of either all-wheel or front-wheel drivetrains.

The third generation came out in 2018, the 2019 model year. It shares several features with the Honda Accord, like a direct-injected 2.0-liter turbo engine and a 10-speed automatic transmission. The engine has a power of 272-hp. There are front-wheel and all-wheel versions of the third-generation RDX. 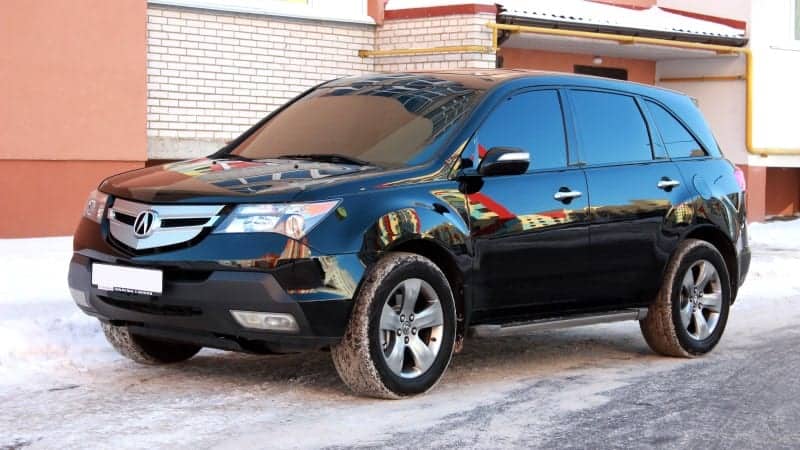 The Acura MDX is a three-rowed luxury crossover and has been in production since 2000. It is one of the best-selling luxury crossover utility vehicles. The MDX has the same platform as the Honda Pilot, with a seven-person seating space. It was a replacement of Isuzu Trooper-based models, like the Acura SLX and Honda Horizon. The MDX exists in four generations.

The first generation entered the scene in 2000, for the 2001 model year, and took credit as being the first crossover SUV with three-row seating. Under the hood of this MDX model was a 3.5-liter J35A3, which is Honda’s V6 engine, capable of a 240-horsepower and 245-pounds per foot of torque.

The second-generation MDX debuted in late 2006 and appeared larger than its predecessor. Its body was the product of Honda’s Advanced Compatibility Engineering, which as earlier mentioned, absorbed impact in a collision. The other upgrade was the engine, with the MDX now having a 3.7-liter V6 engine with a 360-hp rating.

The 2014 to 2020 model years fall under the third generation. Notable changes include sporting a 3.5-liter Earth Dreams direct-injected V6 engine. This engine is the product of Honda’s Advanced Technology research program. There is also a 3-liter version for hybrid cars.

The exterior is more streamlined than previous models to improve on aerodynamics. A thing to know about the third-generation model is that it is the first time the MDX had a front-wheel drivetrain.

The fourth generation is for the 2022 model year. It has two engine types, a 3 and 3.5-liter V6. The 3-liter exists as a Type-S or turbocharged engine.  Moreover, it has a 10-speed automatic transmission.

There are four trims for the fourth generation: Base, A-spec, Technology, and Advance.

With a focus on RDX vs. MDX size, you notice that the latter is pretty large. Here, we will look at the latest generation of each Acura model. The third-generation RDX is 186.7-inches long. On the other hand, the fourth generation MDX is 198.4-inches long, roughly 11-inches longer than the RDX.

The extra length is for accommodating its third seating row.

The other to touch on the Acura MDX vs. RDX discussion is reliability. There are several elements to look at when weighing the reliability of these crossover utility vehicles. We start with comfort, where you find that each brings its best, with features like leather upholstery and a state-of-the-art infotainment system.

The MDX overcomes its competitor in spaciousness, as it has a 7-passenger capacity. The RDX accommodates five passengers.

We can see on reliability that the MDX is easily the most refined model, though the RDX does not disappoint.

Price is a crucial factor to check on when getting a vehicle. As per car listings and the quoted price on Acura’s website, the MDX appears to be pricier. For instance, a 2021 RDX has a starting price of $38400. It is lower than that of a 2022 MDX, whose cost is around $47200.

The high cost of the MDX is probably due to its features, like more seating space and a robust engine.

Both the RDX and MDX are technologically sound, relying on Honda’s research programs. Their bodies are products of Advanced Compatibility Engineering, which protects the vehicle and its occupants in a collision by absorbing energy.

Other advancements are in the safety features. They share add-ons such as adaptive cruise control, forward collision and lane departure mitigation, and automatic emergency braking. In the RDX vs. MDX technology debate, the two Acura models tie.

The latest RDX and MDX models have front-wheel and all-wheel-drive versions, with 10-speed automatic transmission. You pick a preferred type depending on your driving style and the roads you use.

The other crucial discussion is RDX vs. MDX fuel economy. The RDX seems friendlier, with an average consumption of 22-mpg city and 28-mpg on the highway. Flipping the coin, the MDX has a rating of 19-mpg city and 26-mpg highway.

If you are looking for fuel economy, go for the RDX. However, if you need more power, the MDX will have your back.

The two models from Acura vary a lot, starting with the body size, with the MDX being the larger one. The MDX’s interior is larger, with three rows that can accommodate 7-passengers. The RDX is smaller, with a 5-passenger capacity.

The MDX line has been around longer than the RDX, beginning production in 2000, and currently in its 4th generation, with the 2022 year model being the latest entry. The RDX debuted in 2006, with three generations coming out of its assembly zones. The latest RDX entry is for the 2021 model year. A point to note is that there is no 2021 Acura MDX model.

The other point of contrast is the engines. The MDX has sturdy 3.5 and 3-liter V6 engines for its latest model. The 2021 RDX runs on a 2-liter turbo engine, which is not that powerful but economical.

RDX vs. MDX Pros and Cons

Pros of the RDX

The RDX is very stylish, from the exterior to the interior. The latest model has a sporty look, which gives it the aura of luxury and class. The interior is welcoming, sporting high-grade material for comfort. It is pretty spacious with ample legroom.

The infotainment system is up-to-date, with components like a 10-inch touchscreen, Apple CarPlay support, and rear-seat USB ports. The turbocharged engine is robust and economical on fuel.

A disadvantage of the RDX is that it is not suitable for off-roading due to its engine power. In addition, it does not have the high towing capability, as other vehicle makes in its class.

Pros of the MDX

The MDX is an excellent looker, with a sporty design. It has a streamlined shape, which works for its aerodynamic qualities. The MDX’s interior is very comfy and spacious and can accommodate seven people. Inside the MDX, well-stitched leather is the primary material, which is durable and cozy.

This Acura make has a robust engine that gives it a power of around 290-hp. Moreover, it has many driver-assisted features, such as adaptive cruise control, pedestrian detection, and traffic jam assist.

The downside of the MDX is its costs. It is costly to purchase, and compared to the RDX, it has a poor fuel economy.

Q: Which Is Better, RDX or MDX?

If looking for simplicity and fuel economy, the RDX is an excellent option. Look at their specs to see the one that is more befitting for your situation.

Q: What Is Acura RDX Comparable To?

The Acura RDX is a compact luxury crossover utility car, initially built on the Honda Civic platform. The luxury crossover SUV class has many players that compete with the RDX, including its cousin, the Acura MDX, which is slightly big.

Other carmakers in this class to compare with the RDX are the Audi Q5, BMW X3, Lexus NX, and Porsche Cayenne.

Q: Is Acura RDX Worth The Money?

The 2021 Acura RDX has four trims. They are the Standard, Technology package, A-spec package, and Advance package. From Acura’s site, their prices range between $38000 and $46200 for the front-wheel-drive version. All-wheel-drive versions have a higher cost.

While it may seem high, the vehicle guarantees you many excellent features. Like a cozy interior, plenty of driver-assisted features, and reasonable consumption. As an experienced driver, you will appreciate the value you get from acquiring the Acura RDX.

Q: What Do RDX And MDX Stand For?

Acura is the luxury car division of Honda and has some of the most covetable lineups. Under the crossover SUV category, it holds its ground with the MDX, which stands for Multi-Dimensional Luxury. There is also the RDX, which is short for Refined-Dimensional Luxury.

You can check out Acura’s site to peruse other vehicle makes.

Q: Is Acura RDX AWD Worth It?

The latest Acura RDX, the 2021 model year, has two options to pick from, the front-wheel or the all-wheel drivetrain. The latter is a better option, suitable for different terrains. It costs higher than the FWD across all trims.

Is the price worth it? Yes, it is. While the RDX is not that good on rough terrain, the AWD pick is excellent in handling, and you can go through various surfaces with ease as power goes to all wheels.

This piece shows you the difference between RDX and MDX, two vehicles from Acura. They share several similarities, like both being compact CUVs and targeting the luxury market.

Go through this article and learn more about the RDX and MDX. If interested in getting one, check out Acura’s website for pricing. Alternatively, you can visit platforms like Carvana or CarMax to peruse used and new models.