Fire trucks, a sub-category of the types of trucks, are auxiliary vehicles that the US fire department sends out to transport firefighters from the department’s fire station to the fire scene.

Various types of fire trucks are useful during a fire emergency. Do not forget that fire engines vs fire trucks are different – though they share common functions. The type of fire trucks to use depends on the emergency and the requirements for successfully managing the operation. Also, fire trucks can convey necessary firefighting equipment such as ladders, first aid, and protective gear to the fire scene.

Different types of fire trucks and their uses

Over time, fire trucks have undergone a major transformation from conventional fire trucks into a more sophisticated system capable of tackling the wildest fire.

In this section, you will learn about different types of fire trucks and their uses. 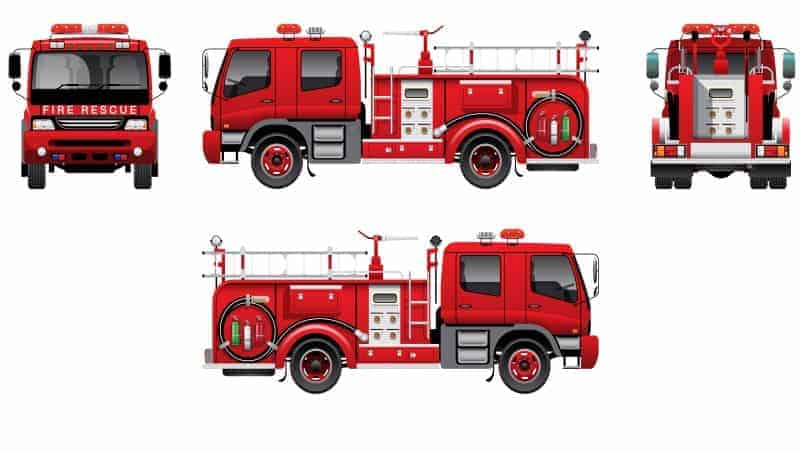 A pumper truck at the scene of a fire outbreak helps contain the fire and save lives by providing firefighters with the tools they need.

The turntable ladder truck derives its unique name because of a turntable at the rear of the truck. The turntable acts as a pivot for the ladder mounted on it. This freedom to rotate along the turntable’s rotational axis allows water to be sprayed easily in any desired direction.

The turntable ladder truck has a telescopic ladder which is useful in accessing difficult-to-reach heights. Some have a pre-piped waterway with a built-in water function. Others have an onboard supply reservoir instead.

The heavy rescue vehicle is an apparatus type of fire truck. Simply put, it is the go-to fire truck for technical rescue operations. Sometimes referred to as a ‘rescue squad’, this name is quite befitting because it does not restrict its usage to fire rescues. It is also useful in rescues involving massive traffic collisions and collapsed buildings.

This type of fire truck is best described as a multi-purpose or cross-functional fire truck. This is because it provides firefighters with multiple tools for different functions on one truck. Using the Quint fire truck eliminates the need for multiple trucks and a crowded fire rescue scene.

The Quint is useful in operations that require tactical firefighting by providing firefighters with a master-stream, including pump and hose, aerial support, and a ladder to aid access to elevated areas and non-stop water supply.

The A-wagon fire truck is used to tackle brush and grass fire occurrences. It is a special vehicle for tackling hazards.

The A-wagon got its unique name because of its simultaneous roll and pump-action, helped by its separate auxiliary motors.

The water tender type of fire truck is also known as a mobile water supply truck. They are primarily for picking, transporting, and delivering water to fire rescue operations. These fire trucks have a minimalistic and simple design since they are only used to provide water supply on the field. Hence, they do not come fitted with a pump. 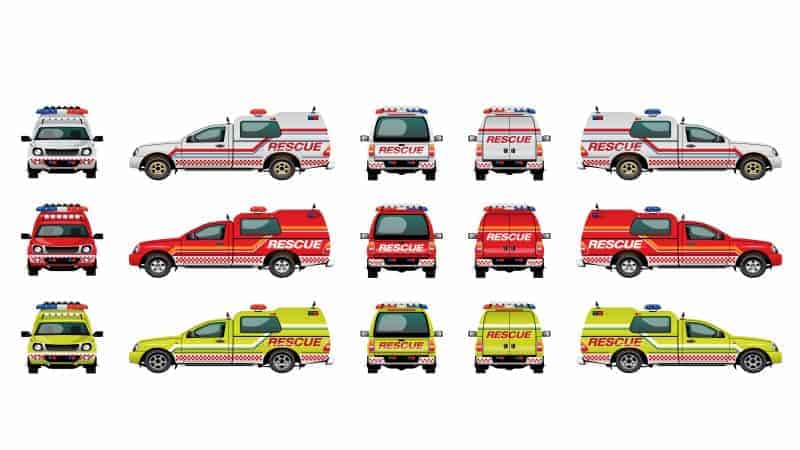 A Type 5 fire truck is a 4-wheel drive version of your everyday pickup truck. The difference between the Type 5 fire truck and the average pickup is that the Type 5s are built to meet the department’s needs. They have a smaller body, can carry between 50 and 400 gallons of water, and have a gross vehicle weight rating within the 16,000lbs to 26,000lbs range.

Type 1 fire engine is a common truck in the fire department and the most used type of truck. The ability of the Type 1 truck to maneuver puts it as the first choice when fire trucks are sent to densely populated areas.

Manufacturers designed Type 1 fire engines to support rural, suburban, and urban firefighting departments. That’s why this fire-type engine comes with all NFPA firefighting equipment. These fire trucks are the first to appear on fire scenes because they support both initial Emergency Medical Service [EMS] and structural fighting response.

Q: What is a cascade fire truck?

Cascade fire trucks are useful to forestry departments, city fire departments, and private contractors. Also, they are in use in most states.

Q: What are the 4 types of firefighters?

Firefighters are men and women whose job is to protect and educate the general public by fighting fire scenes and providing a medical response. Firefighters are further classified into several categories based on their line of duties.

Types of firefighters include;

Structural firefighters: these are men and women in neighborhood firefighting departments who attend to medical emergencies, commercial fires in towns and cities, and residual fires.

Wildland firefighters: These are groups of well-trained firefighters whose duties are to prevent and extinguish fires in the huge plain of western and midwest states.

Aircraft firefighters: These are well-trained firefighters to handle aircraft fires. They need a specially trained fighter to lead their crew, and all team members must be trained to handle fighting foams to control massive fuel-burning fires.

Q: What is a Type 3 wildland firefighter?

A Type 3 wildland firefighter is a four-wheel drive capable of driving on and off-road. By default, they have a high-volume and high-pressure pump and a gross vehicle weight rating above 20,000lbs.

Type 2 fire trucks feature many components and the same specifications as type 1 fire trucks. They are not common like the type 1 trucks but are versatile fire rescue trucks in suburban and urban applications acting as first response rescue vehicles. A Type 2 fire truck shares some similarities with the Type 1 fire truck. Although its pumpers appear more compact compared to type 1, they hold relatively the same amount of water. This type of fire truck can carry 3 or 4 firefighters.

These comprise command/general staff positions, such as Division Supervisor and Unit Leader. They respond to incidents relating to law enforcement, technical rescues, and special events.

Q: What’s the difference between truck and squad firefighters?

A fire truck is generally any type of truck to carry water to a fire scene, whereas, squad firefighters are without any type of truck at all. When an emergency fire rescue operation is to be carried out, you can choose from the various fire trucks that will be useful for the operation. A squad can also be an entire firefighting organization whose primary job is to rescue or save lives.

Note: Do not confuse Squad firefighters with Squad truck, which is a smaller truck with additional equipment and material that may be useful if any other emergency occurs during the rescue operations.

Q: What is the highest level of a firefighter?

The highest firefighter level is the Fire Chief followed by the assistant chief. This is the highest-ranking position attainable in the fire department. This position comes with the responsibility of ensuring the fire department operates efficiently and controls the department’s personnel and activities.

They have controlled the entire firefighting departments and divisions – from training facilities and safety services to EMS services, and operation divisions to any specialty divisions. They have almost the final say [remember they have to take input from the city mayor and manager].

Q: What is the function of an auto cascade system?

This is a mouth-breathing air system for an emergency that works irrespective of the presence or absence of a compressor on fixed units or truck-mounted.