No doubt that the world got surprised as Ukrainian officials and the US State Department for Defense said that two anti-ship missiles sent by Ukraine attacked and destroyed one of the three big warships of Russia. On 14 April 2022, Ukrainian missiles Neptune devastated the Russian warship Moskva with nearly 400 members in it. As per the reports, the Russian ship Moskva tried to defend it but to no avail.

This cannot be usual war news to read and go ahead. At least for two reasons, make this news stands out, and you will halt. The reasons are:

Neptune missiles are said to be Ukrainian ships not borrowed from or sent by NATO or other European friends.

The question is, how did Neptune dodge a ship like Moskva to hit a dead blow not being intercepted? What about Moskva’s defense to counterpunch any threat? How could Neptune missiles evade these defense systems? To get it clear, you need a little brief on the tactical sides of the matter, the ship and the missiles.

This was a Russian Navy-monitored missile cruiser and the representative ship of the Project 1164 Atlant. The vessel’s gravity is perceptible from its naming after the capital Moscow. She was the frontline ship in the devastating naval assault that wreaked havoc on Ukrain in 2022. More known and deemed to be a vital player in the invasion, the Russian Black Sea Fleet is projected to be the flagship during the 2022 invasion of Ukraine.

To have a complete picture, this is the cruise that played a significant role in the military operations by Russia on Georgia, Crimea, and, very recently, Syria in 2015.

Launched during the last decade of the Soviet period, the ship took the name Slava in 1979 at its first advent. Then, it was one of the three Slava-class fleets – Varya in the Pacific Ocean, Marshal Ustinov in The Arctic Ocean, and the ship under discussion – Moskva in the Black Sea.

It was renamed to be Moskva in 1996 and since then thought to be the most powerful warship in the Black Sea region. After more than two decades, Moskva was repaired and was expected to serve until 2040. Let’s know the specifications and details to get deeper into the picture and get fully clear.

To inspire awe, it dislocates 12,490 tons of marine water while moving. 4 gigantic gas turbine engines empower Moskva each turbine featuring a clutch design handle. A total of 121,000 shaft horsepower is the output delivered to 2 times shafts:

Yes, the question now rising in curious minds is, “Is the radar system of Moskva not that capable?” The answer is yes. It is highly capable and equipped with Voskhod. Top Pair’s MR-800 series is a long-range 3D search radar that provides the ship with the most advanced surveillance – and all-seeing digitalized sensor and capable processing unit. Moskva is guarded by Fregat MR-710 3D air search radar to intensify the defense measure further and detect any approaching aircraft.

Moska is guarded by multiple missile systems, both long-range and low-range, capable of defending against threats coming either from air or sea.

P-500 or P-1000 Vulkan: Moska possesses 16 Bazlat or Vulkan missiles – ever vigilant in its defense. On top of being surface-to-surface, they are supersonic cruise missiles with a range of 550 km at a speed of Mach 3 plus.

9K33 Osa (SA-8): These missiles are short-range low-altitude and surface-to-air missiles used primarily against low-flying aircraft and defending anti-ship missiles. These projectiles can fly up to 30 km at a speed of 80km/m.

Neptunes missiles, called R-360 Neptune, are anti-ship Ukrainian missiles designed after the old Soviet Kh-35 defense-breaking ship missiles. Brought to light for the first time in 2015 at Kyiv, it made its maiden advent in service in 2021. Since it’s advent, it has been tested frequently from 2016-2019. It did massive in its maiden venture on 13th April 2022, targeting and destroying the giant Moskva.

The division Neptune Missiles projected from consists of:

This division allows the Ukrainian part to operate from 25 km or 16 miles distance from the coastline. Here you go for Neptune specs:

How Could Neptune Dodge Moskva Defense?

The question raised from every quarter that how could a newly developed missile-like Neptune evade the radar-monitored defense system of Moskva? There are several speculations and hypotheses deciphering the mysterious trick played by Neptune. Let’s talk elaborately about the most convincing distraction theories. 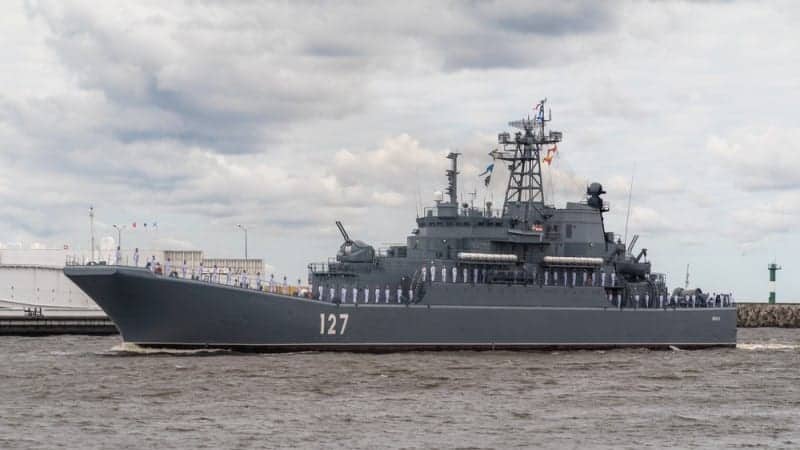 In answer to how the Ukrainian missiles pass through the Moskva defense radar, one of the techniques allegedly used by the Ukrainian side was a drone to allure the Moskva radar to tilt to one side. Thus, Moskva’s all-seeing radar kept distracted when Missile attacked to send it to the Black sea bed. It may sound illogical or cinematic, but the trick played well to dodge multiple radar systems on Moskva set to detect whatever was approaching the ship. The ship was not supposed to be vulnerable but the Neptune missile proved it wrong.

There are reasons to be utterly surprised as Moskva is equipped with two 360 degrees search radars to spot upcoming invasions from all directions– Voskhod MR-800 and MR-710. These radars are less accurate than the fire control and target radars to point out the weakness. Yes, Moskva was also defended by fire-control radar, the Top Dome SA-N-6 the Russian side heavily relied on. This was a 180 degrees radar that could target S-300F missiles, and any air threat the alleged drone could distract it taking the opportunity to be 180 degrees.

But still, there have been 9K33 Osa and AK-630 guns ready to fire at command.

This is a logical explanation as a storm can make the radar unable to distinguish between high sea wavelengths and low-flying missiles. Now, read the next paragraph to learn how Neptune, the newly-built Ukrainian missile put an end to the Russian cruiser Moskva.

One YouTube video is live showing in a simulation how the Neptune missiles might have evaded the defense radar of the target ship Moskva to hit and destroy it. The ship could have defended it in good weather conditions as it could sense the aggression beforehand, but the changing weather worked in favor of Ukraine. In the video, when the weather is changed to stormy and rainy conditions, the radar couldn’t sense the attacking missile with only AK-630 turrets involved in defense. Have a look:

The Neptune missiles were projected from a truck on the plain. It was made to fly 10-15 m above the seawater, and it was further lowering as it approached the target. And when it reached the target to land the fatal blow, it was not more than 3-10 m above the wave crest. Speculations are that this low altitude could have favored Neptune and gone against Moskva.

The defense missiles on guard in Moskva have 20-25 m to be their lowest minimum altitude, and it is pretty clear why they cannot neutralize Neptune flying far lower than their altitude. This is true for both the first and second missiles system in Moskva.

Now, AK-630 is the only defense left to save Moskva but why and how did it not work?

But this one was rendered useless by a speedier Neptune. To make it clear, AK-630 enjoys an active range of 1.5km, whereas the approaching missiles were flying at 900 km/h. How could AK-630 counter in just 6 seconds? Yes, the Moskva has six of them but can even 3 or 4 of them make any change of the lot? 6 seconds is too less a time to prevent as deadly an attack as Neptune caused.

However, these are just analyses from the viewpoint of a defense analyst as it is tempting to answer why the Moskva defense failed and Neptune could pass the most powerful of the defense radar systems. It is like David’s stone did its miracle to destroy the giant Goliath.

It is also likely that the P-500 Bazalt missiles resting on the cruise are responsible for the havoc. They were the obvious target of the attacking missiles. Perhaps, hitting those could have caused more fire and explosion to accelerate the sinking of the Moskva.

What do you think, anyway?

You can share your take on this with us.