Have you ever wondered what cools the air coming out of your AC units? The refrigerant does the cooling. Without it, you’ll receive warm air. What is a refrigerant in AC, anyway?

A refrigerant, also known as Freon or Puron, is a chemical mixture or compound used in refrigerators and air conditioners, responsible for expelling heat from surrounding air and generating cool air.

Refrigerants come in liquid form, but after passing through evaporator and compressor, it turns to gaseous form. Refrigerants perform a vital role in everything that cools, such as refrigerators, freezers, and both home and car ACs.

Though all AC refrigerants perform the same function of cooling, they have various types. This article will explain AC refrigerant types, their uses, and which to use in your vehicle.

Different Types Of AC Refrigerant And Its Uses

The following are the most common refrigerants used in air conditioners. 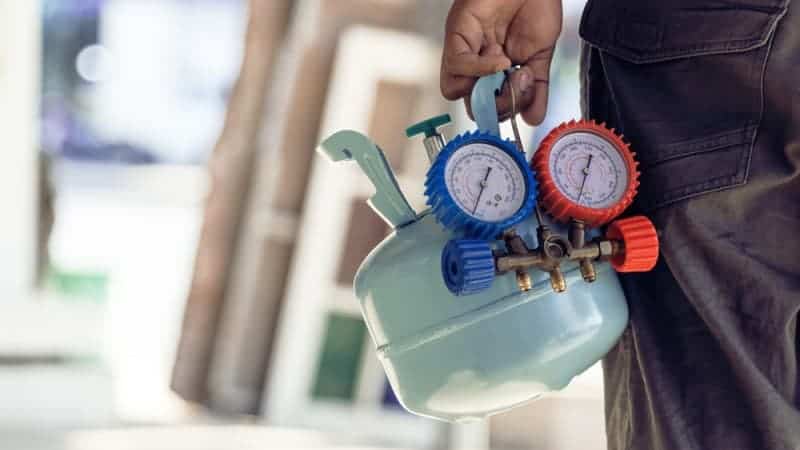 Chlorofluorocarbons like R12 are one of the common AC refrigerant types seen in most air conditioners. They cause harm to the atmosphere. This is because they contribute to greenhouse gas effects, which are dangerous to human health.

Because of its greenhouse gas effects, automakers stopped using it as a refrigerant on vehicles. This, however, reduced production. R12 refrigerants ceased production in 1994.

R22 refrigerant types are what HVAC experts call Freon. This refrigerant has served as central air for air conditioners for decades. Though, it has its disadvantages. It causes harmful damages to the environment, such as ozone depletion.

Because of the ozone depletion that hydrochlorofluorocarbons causes, the United States environmental regulations birth the Clean Air Act of 2010, and manufacturers stopped using it. As of January 1st, the production of R22 ceased in the United States.

This doesn’t mean it is illegal to continue using your heat pumps or air conditioning systems using R22 refrigerant. After 1st January 2020, only reclaimed supplies, recovered, or recycled R22 refrigerants are allowed.

HFCs, also known as Puron, are another common type of refrigerant used in AC. It replaces the R22 refrigerants. R410a does not have chlorine, making it environmental-friendly and has the same cooling characteristics as R22.

Hydrofluorocarbons has a reputation for increasing reliability, comfort, efficiency, and better air quality. HVAC experts do not recommend recharging it in systems that run on R22. If you want to do that, you’ll need an upgrade.

If you’re searching for the best AC refrigerant types for homes, consider purchasing Puron. It is the no.1 for your home AC, as it has no harmful effect on the environment.

These three types are the most common AC refrigerant types for cars.

How to Tell Which Refrigerant to Use

Most AC compressors and evaporators have plates or stickers on them that state the refrigerant to use. So, if you want to know your AC unit refrigerant type, look at the large sticker or plate on your evaporator and compressor.

It may have inscriptions like ‘R22,’ R410a,’ ‘R32’, ‘R134a,’ Freon, Puron, or a combination of letters and numbers, depending on the cooling system. Since the EPA banned the production of hydrochlorofluorocarbons (HCFCs) in the United States of America, we’ve hydrofluorocarbons (HFCs).

The United States environmental protection agency ban HCFCs and they are replaced with HFCs due to its chlorine content, which causes harm to the ozone layers.

ACs that work with hydrofluorocarbons have to run at 60% pressure higher than AC units that run on hydrochlorofluorocarbons. They are smaller on average.

Ac units that use HFCs also function with synthetic oils, making them more soluble than mineral oils that HCFCs refrigerants use.

Having seen these differences, it’s essential to examine the plates and stickers on the evaporators and compressors to determine the required refrigerant type for your AC. Using the wrong AC refrigerant can cause severe damages to the AC system components.

Q: How many types of AC refrigerants are there?

Indeed, all AC refrigerant types play a common role in absorbing surrounding heat and generating cool air once it passes through the evaporator and compressor. However, there is more than one type of AC refrigerant, which confuses users on which to use on their cars.

Precisely, there are three types of AC refrigerants, and using the wrong type will cause system damage. This is because they are not interchangeable.

Q: Which refrigerant is used in AC?

Refrigerants give the entire air conditioning system the power to cool your car and home. It absorbs heat from ambient air and generates cool air after passing through the evaporator and compressor.

Many motorists and homeowners overlook them when shopping or recharging AC systems. You’ll agree, it is easy to forget the refrigerant pumping the cool.

Q: What refrigerant is used today?

While refrigerants play an important role across the world in air conditioning systems, there’s increasing demand to phase them out due to their harmful impacts on human health and the ozone layer.

Q: What is the difference between Freon and Puron?

Freon is a type of refrigerant that replaces R12 because of its high negative impact on the environment. Though, Freon still causes ozone depletion, which leads to the discontinuation of the production in January 2020. Puron replaces Freon because it lacks chlorine, which causes harmful effects.

Here are the differences between the two refrigerants.

Freon causes ozone depletion. This means it contributes to global climate changes which the world is suffering today. In contrast, Puron does not deplete the ozone layer, making it environmentally friendly.

Because of Freon’s harmful impacts on the ozone layer, the EPA has stopped production since early 2020. Puron is still in production and is common in today’s air conditioning systems.

Freon has a higher price than Puron. Since the EPA has stopped Freon production, with a limited supply, demand will hike, making it more costly than Puron.

Puron is more energy-efficient than Freon. This will drop fewer utility bills for homeowners.

Q: What is the most common refrigerant?

Q: What refrigerants are banned?

Many older refrigerants that are widely used in commercial and residential cooling systems, like R12 and R22 are banned because of their negative impacts. The EPA phased out these refrigerants because of evidence that they cause ozone depletion and contribute to global warming that we’re facing today.

Recharging AC systems is quite easy. You can do it yourself without the help of professional learning how to remove AC from a car. But if you don’t understand the underhood working principles of your car, contact an expert HVAC technician to recharge the refrigerant.