What is the big deal about bad oil cooler symptoms, and why should you know what they are? Your car engine cannot function without oil. This is because of the multitude of moving parts that require lubrication to function optimally. Interestingly, this oil picks up a lot of heat in lubricating these moving parts; so much heat that it needs to be cooled down using a component known as the oil cooler.

The oil cooler is an essential part of your car’s oil cooling system, without which your engine components cannot function optimally. After a while, your engine’s performance and service life get affected. So what’s the big deal about lousy oil cooler symptoms? Let’s start with how oil coolers work.

How Do Oil Coolers Work

The average automobile engine creates a lot of heat, which affects the oil that plays a key role in its optimal performance. When in a functioning engine, engine oil should ideally be between 180 degrees and 200 degrees. This is the prime temperature it needs to clean, cool, and lubricate your car engine. In performing these functions, it absorbs some of the immense heat that the engine has. The heated oil has to be cooled, or it will wreak some havoc on the engine components. Hence the need for an oil cooler. 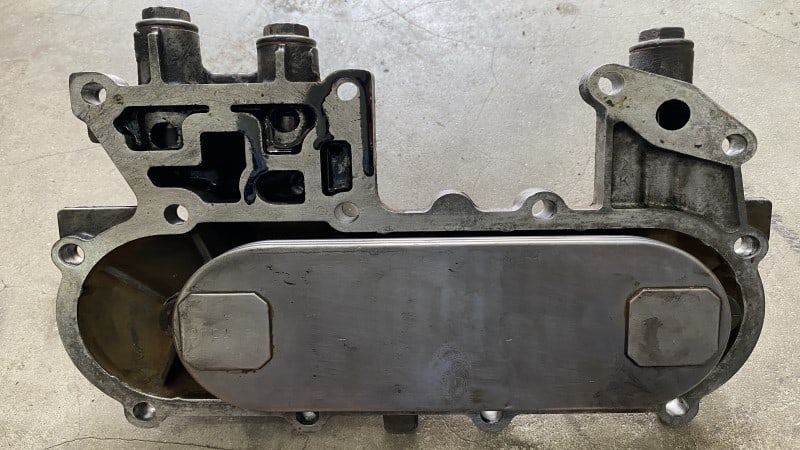 How much does an oil cooler help a car engine? A whole lot. An engine oil cooler is an engine component that removes the excess heat from the internal combustion engines of cars. It is used for cooling those car components that use engine oil, and it performs this function like a heat-exchanger. There are two different types of oil coolers, and they take the form of a small radiator. The first type of engine oil cooler is the fin and tube system. With this oil cooler, the engine oil passes through copper tubes that let in air through the fins, hence the name “fin and tube”.

The second is the tube and shell system. This oil cooler works by allowing liquid coolant or water to flow through a tube system. The engine oil flows through this system of tubes and the cooling fluid runs through the tubes and absorbs the heat from the oil via the tubes’ walls. Thus cooling the heated oil in the process.

The oil cooler location varies from the vehicle as it is often situated in the most efficient position for it to function as a heat exchanger. However, not all cars are equipped with an engine oil cooler. This is because regular vehicles usually do not need an engine oil cooler because of car radiators which are meant to perform cooling functions to the engine. Vehicles that come with oil coolers include modern cars (BMW, Subaru, Nissan, Toyota, VW) trucks, SUVs, race cars, tow trucks, and eighteen-wheelers. Now that we know how oil coolers work let’s look at the symptoms of a bad oil cooler.

Like all mechanical devices, your car’s oil cooler is bound to fail at one point. The time it takes to fail depends on a series of factors, but it’ll fail over time. After all, it has a service life that expires. The best that can be done is to implement the correct maintenance procedures. That said, a bad oil cooler will always let you know that it has gone bad. In some instances, these signs are pointers to other problems with your car, but by and large, there is always something wrong with your oil cooler whenever you see those symptoms. Here are some of the symptoms of a bad oil cooler. 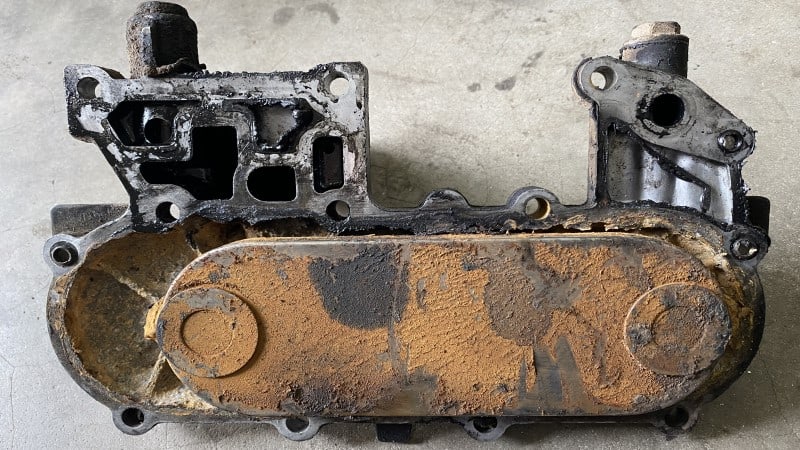 The oil lines are connected to the oil cooler by an adapter. When the adapter fails, it could lead to a leak which forces oil out of the cooler and the engine. The quantity of the oil that is leaked depends on the size of the leak. A small leak could lead to a small puddle, while a steady stream of oil could be because of a significant leak.

Another kind of oil leakage that implies the oil cooler’s internal failure is the presence of lubricant in the vehicle’s cooling system. Since the pressure of oil is more than the pressure present in the vehicle’s cooling system, oil gets into this system whenever the engine runs. This could result in poor oiling of the engine parts and eventual engine damage.

Either way, oil leaking from the oil cooler will lead to a higher engine temperature and ultimately affect the engine’s performance and service life. Your best bet in this situation is to get a professional to effect an oil cooler leak fix.

An oil cooler’s external failure can leak out the coolant from the engine. The leak could result in anything from a small puddle to a steady stream of coolant under the vehicle. A coolant leak from a bad oil cooler can cause engine overheating problems. Get a professional to diagnose and manage the problem.

One of the symptoms of a bad oil cooler is diminished engine performance. Since there is a reduction in the rate and volume of cooled oil, the vehicle’s engine will have an increased temperature. This often leads to a reduction in the engine’s functions like a drop in acceleration, for instance.

Once your oil cooler has gone bad, there will be an oil leak from the engine into the combustion chambers. The presence of oil in those chambers results in the emission of pungent black smoke from the vehicle’s exhaust. Whenever you notice this, turn off the car as soon as you can because you run the risk of damaging some of the engine components.

Besides the emission of black smoke from the exhaust, when oil gets into combustion chambers because of a bad oil cooler, it causes vibration. The vibration is due to explosions in the various cylinders of the car. These vibrations can damage other vehicle components if not handled as soon as possible so get a professional mechanic to look into the problem as soon as possible.

A swollen radiator is one of the most obvious signs that you have a bad oil cooler. Besides the oil radiator’s distended nature, you will find broken hoses that can hamper engine performance. A physical inspection of your vehicle’s engine will reveal this.

The tube and shell oil coolers use coolant to regulate the oil temperature. When the oil cooler is in working order, the coolant flows around the tubes without any contact with the oil. When an oil cooler fails, it can pressure the cooling system to force coolant from the system into the oil pan. This leads to a situation of coolant in oil which can lead to engine damage, and the engine will stop if it is not handled as soon as possible.

Can You Drive With A Bad Oil Cooler?

It is not the end of the world, neither is it the best thing to do. You can drive for a while, depending on the symptom you notice. You can manage the car with a bad oil cooler as long as you don’t need to do any tasking driving. Although the car may not overheat immediately, and it might take some time for the effects to manifest, you want to sort the issue ASAP because you run the risk of irreparably damaging your vehicle over time.

It depends on the design of the car in question. Many cars are not designed to have an engine oil cooler, and such engines have a different cooling system.

When Should I Change My Oil Cooler?

Once you implement the correct maintenance procedures, your car’s engine oil cooler should last the car’s lifespan. So in the absence of accidents, your oil cooler does not need to be replaced for several years.

Can An Oil Cooler Be Repaired?

Yes, it can. But it depends on two things—the kind of engine oil cooler and the extent of damage to the oil cooler. In most cases, it best that you get a professional to diagnose the problem early on before the damage becomes irreparable.

How Much Does It Cost To Replace An Oil Cooler?

An engine oil cooler leak repair cost will depend on the shop, its location, and the make and model of the car you drive. That said, replacing your car’s oil cooler will range between $340 to $450.It could be more depending on your location, taxes, and fees.

An oil catch can also is known as an oil catch tank. It is a simple device you fit in the crankcase/cam ventilation system of your vehicle. The oil catch can reduce the oil vapors, which get...

Oil changes are one of the essential engine operations that come with car ownership. Most people, however, tend to take their engine oil for granted. If you clearly understand what engine oil does,...