Car owners with little or no knowledge about auto mechanics may not understand What Are Bushings on a Car? Bushings might even sound silly to you or seem too small to be of any significance, but they play very vital roles in the longevity of a vehicle’s steering and suspension system, as well as comfort for drivers and passengers. In fact, by the end of this article, you would prefer to not own a car, rather than use one without bushings. The purpose of bushings in a car has a quite wide scope.

Basically, bushing acts as a cushion between the parts of a car; it checkmates the degree of movement in the joints. At the same time, it reduces road noise, vibration, and harshness. There are many factors that can lead to damage or wearing out of car bushings. For example contact with contaminants such as lubricants and toad salt, overuse, exposure to harsh weather conditions, even how you drive.

In this article, you will learn what exactly bushings are and why they are so important. Stick around and let’s learn about bushings!

What Are Bushings On A Car? 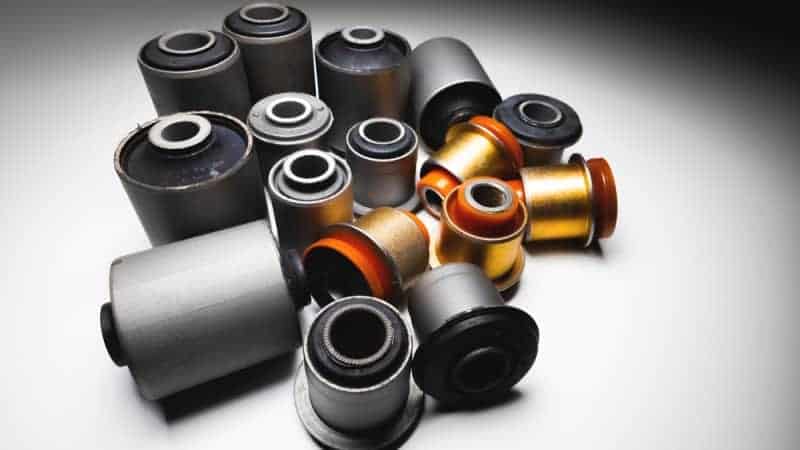 Car bushings are small components made of polyurethane (often referred to as “urethane” or “poly”), rubber, or other materials that serve as a bolster between parts of a car. A bushing is mounted on car steering and suspension joints. It controls the level of movement in the joints, reduces road noise and vibrations, absorbs road bumps, and decreases friction between the metal parts of a car.

Car bushings (sometimes referred to as anti-vibration or flexible mountings) are vibration isolators that place a limit between components of a car. They are responsible for reducing the transmission of energy from one moving component to another. Thus, they reduce vibration significantly and this keeps the driver and passengers comfortable inside the car. Other factors may cause vibration, though.

Some bushing car parts are manufactured such that they are hard or delicate toward one side, and others are loaded up with oil. The most straightforward bushing has a metallic interior sleeve joined to the outer metallic sleeve by a rubber material. Like the ones in the interior angle, the outside sleeve is pressed into the vehicle’s control arm, and it is fastened to the casing’s inside sleeve with a nut or bolt. The two sleeves don’t move; in any case, there is a limited movement range permitted between the two through the adaptable rubber. Rubber is nothing but a decent transmitter of vibrations; thus, it forestalls vibrations and confines its range to the vehicle’s lodge.

Bushings are used in non-moving parts of a car, too, such as strut mounts, engine mounts, transmission mounts, and body mounts.

Oftentimes, bushing car parts take the form of fat, rubbery washers which suspension components of a car (or bolts that keep them attached) pass through. The most common bushings used for cars are rubber bushings. Their designs help manufacturers solve the problems of NVH (Noise, Vibration, and Harshness). Rubber car bushings are quite productive in reducing vibrations, consequently, they are produced massively to be placed anywhere around a car.

How Many Bushings Are On A Car?

Usually, control arms have 2 bushings, but sometimes, only 1. Generally, the suspension design determines how many bushings it will have.

Most vehicles utilize one or two control arms on both the back and front suspension, with each arm lodging two bushings. Most front-wheel-drive vehicles utilize just the lower arm. In any case, most pickups, trucks, and SUVs utilize both an upper and lower control arm. More or less, you can track down a similar number of bushings in every one of the vehicles.

How Often Should I Replace My Bushings?

Bushing car parts are made of flexible materials like polyurethane and rubber. They are used for control arms, strut mounts, shock absorbers, tie rods, ball joints, stabilizer bars (also called sway bars), and other suspension parts, as well as in transmission and engine mounts. Naturally, they will wear out over time.

The wear usually occurs as a result of exposure to the atmosphere, which causes the car bushings to shrink, toughen and tear. They wear due to friction, overuse, the stress of regular motion and weight loads, or exposure to road salt, lubricants, and chemicals like motor oil. Harsh climate conditions also quicken the damage, as well as extreme heat — particularly near the car’s exhaust system.

There is no particular replacement interval for bushing car parts. How often you change your parts primarily depends on your driving conditions and driving style.

How Do I Know If My Bushings Need To Be Replaced?

Car bushings are liable to damage, due to the material used in producing them. Some car bushings have liquids inside. The same applies to sub-frame and engine mounts. We said earlier that most car parts are fashioned from rubber, and typically, the rubber wears out after constant use for a long time. When that time comes, the rubber casing cracks and oozes liquid.

Once car bushing parts begin to wear and crack, you can expect many problems while driving. Let’s briefly look at worn bushing symptoms that indicate when to change the bushing in a car: 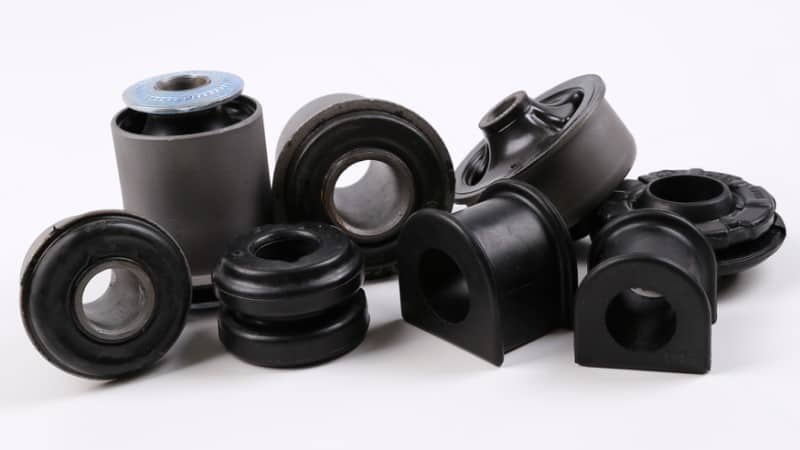 Strange Sounds while Driving: Since car bushings serve as vibration isolators and reduce friction between metal parts of a car, it’s easy to tell. It’s like cartilage that protects the knees and elbows. Worn-out bushings will cause several joints to rub together thereby producing strange noise.

Symptoms of worn bushings are not difficult to spot. If your car bushings get too worn or broken, you’ll begin to hear clunking or banging sounds coming from your wheel fenders due to friction. If you drive over rough or on harsh terrain, bumps or potholes, the sound will increase in intensity.

Unstable Braking: Although the bushing parts are not included directly in the car’s braking system, any instability in the steering and suspension components can cause issues with braking.

Steering Wanders: Since bushings hold the vehicle’s frame in place, worn or broken bushings can cause excess and erratic motion in the system, and in turn misalign the wheels. Worn bushings can make a steering wheel overly loose, to the point where they pull to either left or right side while driving, as a result of misalignment.

Vibrations in the Steering Wheel: One of the symptoms that’ll show you when to change your car bushing is an increase in vibrations in the steering wheel. Usually, the vibrations will intensify when you accelerate, and that can quickly become annoying. This happens as a result of wobbly wheels.

Uneven Tire Wear: This is one of the bad rear control arm bushing symptoms you should watch out for. Check the tire tread on your car frequently and look out for uneven tire wear. Tire wear usually indicates a problem with the car’s alignment, and as explained above, the alignment of a car can be affected if the bushings are worn or broken.

Well, for the most part, broken bushing parts won’t result in any significant collateral damage, but as soon as you spot or encounter these symptoms, you should replace them immediately.

Q: How much does it cost to replace bushings on a car?

The replacement costs of bushings will vary, depending on the make and model of your car. You might want to see the average price of bushing replacements at local shops. At Midas, the price for parts and labor edges between $148 and $651. Mr. Tire’s prices are similar: between $145 and $690.

You might also want to check out Walmart or Amazon. Walmart sells replacements for between $46 and $490, while Amazon sells parts for between $49 and $426. The variation in price is because there are several bushings in a car, and the price differs.

After explaining the meaning of bushings in cars, you should equally know when a car’s bushing is faulty. In fact, it’s pretty easy to detect car bushing noise. Your car would make rattling noises when driven over rough roads. You’ll also hear squeaking or clunking sounds when you hit the brakes or make sharp turns.

Q: How long does it take to put bushing on a car?

The time frame for putting a bushing on a car depends on what type it is, and the mechanic fixing it. A control arm bushing, for instance, needs special tools to press it in, which takes time and increases the labor cost. It takes about 1 hour to 1.5 hours to replace a control arm.

As explained earlier, worn or broken bushing car parts can disrupt the alignment of a vehicle. Bushings keep the car frames tightly in place, control the degree of movements in the joints and reduce friction between car parts. Worn bushings can result in abnormal notions and cause the wheels to misalign.

Q: Is it safe to drive with worn bushings?

Control arms play cogent rules in holding both front wheels on the road. Worn-out control arm bushing parts can cause premature tire wear and let a vehicle slip out of alignment. Driving with bad control arm bushings will be tedious, and undoubtedly dangerous. Therefore, it is totally unsafe to drive with worn bushings.

Q: Is it safe to drive with a broken bushing?

Control arms bushings are responsible for absorbing the shock of road bumps. When they are broken, cracked, or incapable of functioning, the car will continuously vibrate while it’s in motion. A cracked bushings car will also rattle uncontrollably, especially at the metal sleeves of the control arm, and create annoying clunking sounds from the front wheels.

Bushings are simple components, but replacing them when they begin to show signs of failure can improve the quality of your ride tremendously. Either you’re replacing them for an upgrade or doe wear, you’re sure to enjoy smooth and seamless rides.

If you have read up to this point, you have gotten adequate answers to the question ‘what are bushings on a car’ and why they are so important. In this article, we have learned that bushings are very key parts of a vehicle.

By now, you would know that it is practically impossible to drive your car without them and have a seamless ride. As insignificant as they may look, a damaged or worn bushing can affect the entire workings of your suspension systems. It is, therefore, of utmost importance to pay attention to them. Make sure to inspect them regularly and replace them when they begin to wear out.