Vehicles are good innovations that make life easier. But, for some folks, a perfect world requires owning a baby ride that needs only a charge or gas to arrive at your destination without issues. They will not think of words like toe, caster, or camber.

However, a vehicle is a complex machine. Therefore, ownership requires knowing some of these components and how they operate. For example, understanding toe vs. camber vs. caster and how they operate will enable your vehicle to hug the road perfectly.

This article will discuss positive and negative camber, the effects of incorrect camber and caster angle, and what a bad caster does. What is camber on a car, anyway? 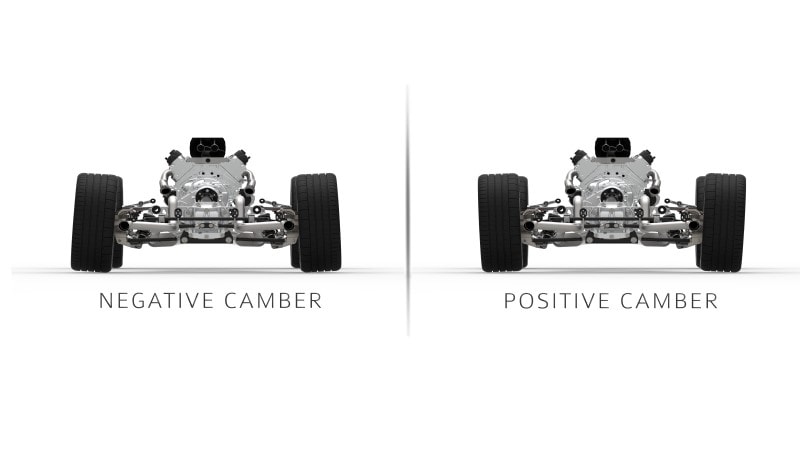 What Is Camber On A Car And Types

Vehicle camber plays a significant role in the handling and overall performance on the road. It affects the tire wear pattern and how the tire hugs the road.

You may ask, what does camber do, and what are the various types of camber? Every vehicle uses cambers to distribute vehicle loads on the entire tire tread. So, let’s look at the various types in the following sections. 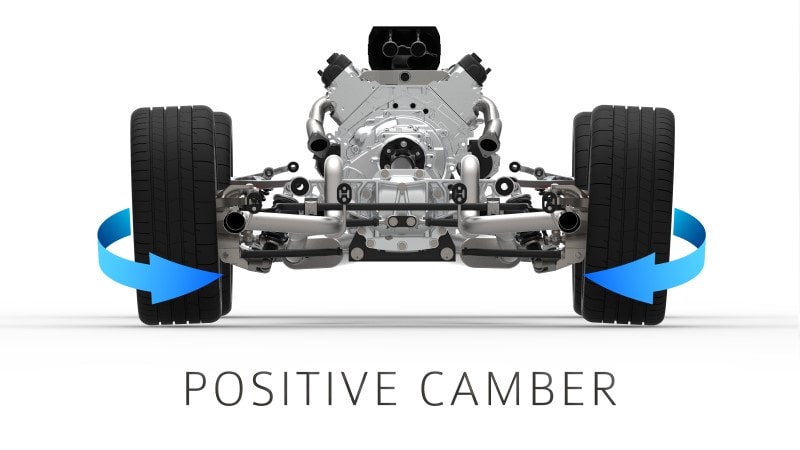 Positive camber offers a minimum driving effort and enhances the wheel’s stability on a straight line. This means that the vehicle hugs the road perfectly. So, if you’re into drag racing, you may want a positive camber angle.

It is more suitable for off-roading vehicles, agricultural equipment, and other mechanizations since it enhances stability and offers minimum steering effort as turning is difficult in these areas.

Another reason ‌positive camber is suitable for off-roading and agricultural equipment is that the rough roads force the vehicles to have negative camber because of camber thrust.

Rough pavements can cause trucks or cars to stray because of camber thrust. However, positive camber helps to keep traction on rough roads.

Often, manufacturers design small cars with a positive camber angle to enhance the stability since the vehicle has low weight.

Sometimes people tend to add custom looks to their cars. For example, a car owner may decide to tune his baby ride to a positive or negative camber angle to look cool in front of his peers. As a result, the vehicle may slam to the ground.

However, a positive camber angle will cause accelerated wear on suspension components like struts and shocks, tires, control rods, and bushings. So let’s see what it means to have a negative camber angle. 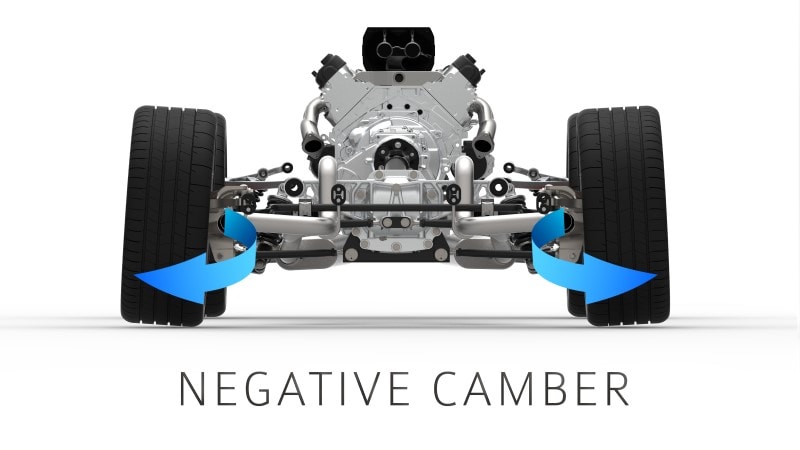 As we discussed earlier, negative camber means the top of your wheels is pointing inward towards the centerline of the car frame. This is the exact opposite of positive camber.

However, too much negative camber isn’t ideal for your car because it has several negative effects. Therefore, let’s look at the positive and negative camber effects in the next paragraph.

While you may want to angle your wheels positively or negatively, here is why you need to make informed decisions.

Believe it or not, too much negative camber angle is a guaranteed way to speed up tire wear. It doesn’t allow the tires to have perfect contact with the road, causing them to wear much faster. This is especially true when driving on rough pavements or when off-roading.

We mentioned above that positive camber enhances wheel stability on a straight line. Negative camber does the opposite. Therefore, a negative angled car will work hard to accelerate smoothly and find it difficult to run straight lines because of compromised stability.

It could lock your brakes or steering

Severe positive or negative camber angling may cause the tires to scrub on the frame, especially when making corners. This can lock up the steering and lead to a collision, especially in highway driving or emergencies. Depending on your vehicle design, an inward tilt of 2 degrees can cause the steering to lock up.

An inward tilt of 2 degrees can also cause the brakes to lock up. This means the brake mechanism may cease to function at some point, especially when taking corners.

A negatively angled camber will compromise vehicle traction on wet pavement, affecting the overall handling and lengthening the braking distance.

The vehicle pulls to one side

Too much positive camber may cause a vehicle to pull to the right or left. You don’t want to have a pull.

Negative and positive cambers have a lot to bring to the table when tilted properly. However, having an experienced mechanic do the job because of its negative effects.

What is a caster on a car and what Types? 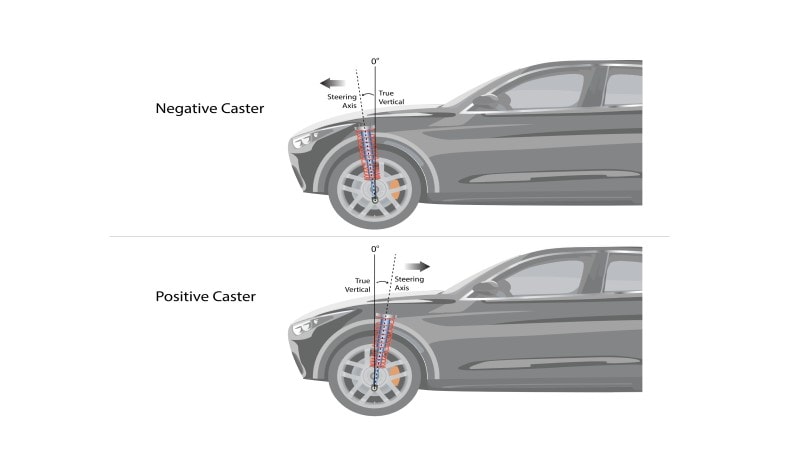 Caster is inward or outward of steering angle in reference to a vertical line when viewing from the side. Caster affects the steering directly rather than the tires. However, it affects the overall steering. Motorists often ignore it because it doesn’t directly affect tire wear.

Casters create the effort needed to turn the wheel, determining the car’s stability. There are two types of casters – Positive and negative casters. Let’s elaborate more.

A neutral caster means that both the top mounting point and the bottom mounting points are on the same vertical plane and also stay in the vertical line of the centerline of the wheel and hubs. This is also known as zero casters.

You can also say a negative caster is when both the upper and bottom hub mounting stays on the same vertical plane as each, but points inward or behind the centerline of the wheel.

What does a bad caster cause?

Just as a caster has benefits, it has negative effects as well. With a bad caster in place, you’ll have to steer the wheel too inward or too outwardly to stay on a straight line. This makes it difficult to stay in a straight line.

If a vehicle lacks enough positive caster, it will feel unstable and wander. A too much positive caster will make the steering wheel hard to turn. It may also cause side-to-side pull. However, too little or too much caster may not cause a side pull in most cases.

Finally, a bad caster may not cause inner or outside tire wear, but too little or too much caster with other alignment issues will cause accelerated tire wear.

Camber vs. Caster: What are the differences?

Q: Is camber good for your car?

Generally, camber plays an essential roll when cornering. However, if the camber is too positive or negative, it can alter the vehicle handling and cause accelerated tire wear.

Therefore, while positive and negative chambers have key benefits, they also have drawbacks. So, you need to consider the benefits and drawbacks to make a better-informed decision.

Q: What is a good camber angle?

A good camber angle depends on where you’re driving the car. However, on a normal modern car, a good camber angle should be around 0.5 to 1 degree to have good traction or cornering grip, a longer tire lifespan, and a balanced braking grip.

Q: What is the benefit of camber?

As reiterated above, camber is the angle between the top upright tire and the bottom on a car’s frame when viewed from the front or rear. It can be negative or positive.

They have many benefits to consider before deciding. However, here are the common benefits of cambering a vehicle.

Q: How much does Cambering a car cost?

The cost of cambering a car depends on who’s doing the job. If you decide to do the job yourself, you’ll only need the right skills and a camber kit. A basic camber kit is between $85 to $100. High-end kits should be around $200 to $250. However, the latter is mostly for mechanics.

Consult a mechanic to camber your wheels if you don’t have the skills. Expect to spend around $150 or less. Some mechanics may charge you more depending on your location and vehicle type.

Positive camber reduces the driver’s effort when turning the wheels and enhances stability in straight lines. This makes it perfect for agricultural equipment like tractors and off-roading trucks, as it’s difficult to steer the wheels on rough pavement.

Q: What happens when the caster is off?

Both positive and negative camber plays a significant role in a car. That’s why it’s important to know what it is and how it works. Fortunately, we’ve explained all you need to know in this article. So, you’ll no longer ask what is camber on a car.