The catalytic converter, cat-cons fondly called, has become a necessity for vehicles since 1975. This is because the component plays a vital role in igniting and burning a vehicle’s unburned exhaust gases.

While some vehicle enthusiasts consider the component an essential component of a vehicle, others believe it isn’t necessary, as they can do without it. Let’s look at what catalytic converter delete means, as well as the pros and cons.

What is catalytic converter delete?

Catalytic converter delete is the process of uninstalling or removing a vehicle’s catalytic converter. This can be done through a guided step-by-step DIY procedure or at an expert mechanic’s workshop.

Catalytic converter delete cost depends on whether you choose to do it yourself (DIY) or engage the service of a professional auto mechanic.

If you decide to do it yourself, it can cost around $50 or less, but you have to know how to remove the catalytic converter and replace it with a straight pipe. Alternatively, if you decide to engage the service of an expert auto mechanic, it may cost around $300 or more.

Removing your car’s converter can be an exciting experience, especially because of its benefits. However, you must not ignore the drawbacks in order to be on the safer side. 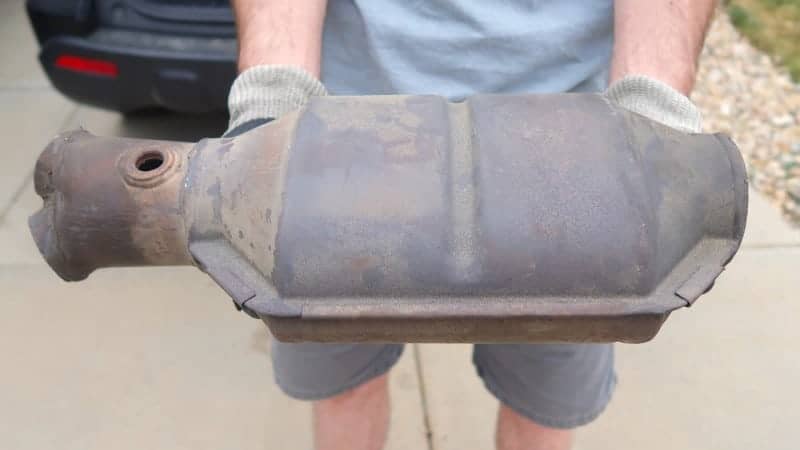 Deleting your vehicle’s converter has a couple of advantages; this is why most people are excited about doing it. However, every coin has two sides (a head and a tail).

Focusing on the head without considering the tail may not be ideal. Hence, it is vital to pay attention to these cats’ delete pros and cons in order to make the best decision on whether to opt for a catalytic converter delete kit or not.

Meanwhile, the removal opens enough space for air inflow to the vehicle’s combustion chamber. This helps to speed up the combustion process and trigger the release of more horsepower.

Removing a car’s converter reduces a vehicle’s engine operating temperature. This is because it lessens the engine’s burden by enhancing the swift and easy release of exhaust gases.

Since the removal of the component creates more air inflow to the combustion chamber, the engine’s operating temperature will reduce significantly.

Better gas mileage is another benefit of removing a vehicle’s converter. When you remove the part, it automatically reduces engine backpressure and operating temperature.

When this happens, the burden on the engine is reduced, resulting in less fuel consumption and better gas mileage.

The presence of the converter hinders the use of specific types of fuel in a vehicle. For example, cars with catalytic converters consume unleaded gasoline because lead-based gas destroys the internal catalyst material in the component.

So, removing the converter grants you the freedom to explore and use a variety of fuel options, including high-performance fuel in your car.

Illegal in most U.S. states

Catalytic converter removal is illegal in most U.S. states, including California. The Environmental Protection Agency (EPA) and Ministry of Transport (MOT) ensure that they sanction car owners who remove their catalytic converter.

Since a vehicle’s converter ensures that toxic unburned exhaust gases producing a high level of carbon dioxide are properly handled, taking it off will alter this process.

Without the component, a vehicle will produce a high level of toxic exhaust release that will pollute the environment and make the atmosphere harmful.

Any noise or sound beyond 85 decibels is noise pollution and can be detrimental to people’s hearing health. This is what it is like to remove a vehicle’s catalytic converter.

The catalytic converter deletes sound from the engine and shoots up drastically, disturbing everyone in the neighborhood and on the street while you idle or drive, respectively.

Inability to pass the MOT test

Failure to pass the emission test may cause your vehicle to be impounded, especially when you resist the MOT rule or sanctions as it applies to vehicles without a cat converter.

More fuel consumption (in some cases)

Some car owners complain about the increased fuel consumption after removing their catalytic converter.

Can you drive without a catalytic converter?

In most states, it’s against the law to drive without a functioning catalytic converter on your vehicle. If caught driving without one, you could be issued a hefty fine or even have your vehicle impounded until the necessary repairs have been made. Moreover, drivers may need a working catalyst in place to pass their emissions test.

Driving without a catalytic converter is not only illegal, but it also carries many risks. Why so? Let’s replay the main point again to make it clear. A cat converter is an essential component of the exhaust system in a car. It’s responsible for cleaning up harmful gas emissions that come out of the engine by converting them into less hazardous compounds.

Without one, drivers would be exposed to dangerous levels of toxic gases such as carbon monoxide and nitrogen oxide, which can cause health problems like headaches, dizziness, or even death in extreme cases.

That said, you may encounter signs of stolen catalytic converter all of a sudden while on the move. The imminent worry would be the catalytic converter stolen, “Can I drive?” To go by the law that you cannot and shouldn’t drive without that component is crystal clear. But if you are middle of nowhere when this component is found missing, you must follow the doctrine of necessity. You must drive unless you reach home or where you can have a solution to that.

In that case, how far or how long can you drive before the cat con reinstated in your car? In fact, you can drive as long as you need because not having a cat con in the car will not create a mechanical issue. To keep sound mentally, you have to stop thinking, is it illegal to drive without a catalytic converter in Washington state, Colorado, or wherever you are?

Of course, removing a vehicle’s catalytic converter affects the engine positively. This is because the removal reduces the burden on the engine.

This automotive exhaust system component will automatically enable exhaust fumes to vacate the engine faster and easier than when it is on. Meanwhile, this can also reduce the engine’s operating temperature.

Undoubtedly, removing a car’s converter can reduce the engine’s stress to a large extent. However, these benefits also come with a prize.

Also, the combustion chamber gains more enhancement because more air will enter the chamber once the catalytic converter is off.

Q: Will removing the catalytic converter make the exhaust louder?

Definitely, one of the obvious things about removing a vehicle’s converter is the loud noise it produces. However, the noise can be pretty distinctive, and some car owners like it this way.

The loud noise can be a disturbance to some people, while others may enjoy the fun. However, removing the catalytic converter may trigger increased fuel consumption in some cases, especially when it’s not properly done.

If you desire to remove your cat converter, ensure to think about the outcome before you start the process.

Yes, catalytic converter delete is illegal because of the environmental hazard it causes. The component helps to minimize the level of toxic exhaust gases it releases into the atmosphere during combustion.

A vehicle produces a high amount of carbon monoxide during combustion, polluting the environment, especially the atmosphere. This contributes to global warming; hence, the government’s concern over the use of cat converters in vehicles is justified.

The catalytic converter ensures that it stores exhaust heat and uses it to convert the harmful gases that result from combustion in order to release less toxic gases. Besides this benefit, it will be difficult to pass the MOT test without your car’s catalytic converter.

Q: Can I replace my catalytic converter with a straight pipe?

Most states do not permit vehicle owners to replace their cat converter with a straight pipe. The Environmental Protection Agency (EPA) ensures that car owners do not tamper with any emissions-related components in their vehicle; otherwise, it will attract strict sanctions.

Removing a car’s cat converter has a couple of advantages with its unique disadvantages.

So, while you are contemplating whether to remove the catalytic converter quickly, do not also forget the potential disadvantages. Always put the consequences of every action forward before making a final decision.

Q: Is it OK to drive without a catalytic converter?

This is crucial to help minimize the effect of toxic exhaust gases in the environment by neutralizing them to the extent that they are not entirely harmful. Meanwhile, the Ministry of Transport (MOT) pays attention to the catalytic converter when conducting the MOT test.

Catalytic converter delete is highly prohibited in most states in the U.S. If you live in California, it would be best not to think about removing the cat converter because the state strongly kicks against such practice.

Although removing this vital car component has some benefits, including increased horsepower; however, the challenges it poses to the safety of the environment should be put forward before anything else.

So, if you are considering deleting your vehicle’s catalytic converter, ensure that your state’s laws permit such practice, and do not forget to consider the environmental effect.