Although the question “Do diesel engines have spark plugs” might come off as a diesel spark plugs joke, many folks may not be sure of the answer. Neither do they know the “why”. To get to the root of the question, let’s start with the spark plug’s function. A spark plug is a component that transmits electric current from the ignition system to the combustion chamber of an engine with a spark-ignition design. It sparks the compressed fuel/air mixture via an electric spark, thus starting the fuel’s combustion, which ultimately moves the vehicle.

Spark plugs are essential components in a gasoline engine because it is required to get the car moving. How many spark plugs does a car have if it’s that important? The answer is 4 for 4cylider engine, 6 for V6, 8 for V8 it goes on that sequence. Now that we know how essential spark plugs are to a gasoline engine, does the same apply to diesel engines? Well, the answer is no. Find out why in the rest of the article.

Why Does a Diesel Engine Have No Spark Plugs?

To understand why the diesel engine does not have spark plugs, let’s take a quick look at the differences in the way both engines work. The diesel engine is similar to the gasoline engine in that both are internal combustion engines. However, as their names suggest, both engines use different types of fuel. But there is more. Diesel engines work based on a compression-ignited injection system that works differently from gasoline engines’ spark-ignited system. The difference in the combustion systems is down to the nature of the fuel. While gasoline can ignite in whatever state it is, diesel must first become atomized. 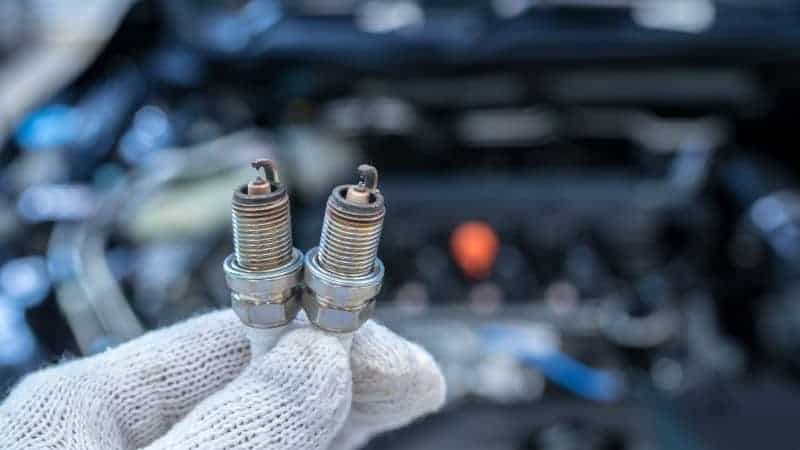 Diesel engines use a glow plug instead. A glow plug is an electrical heating device that is in each of the engine’s cylinders. It has a heating element at the tip, which emits light when heated (hence its name). When diesel is sprayed on the heated tip, it mixes with the compressed air, evaporates and starts the combustion process.  Here is why the glow plug replaces the spark plug.

Diesel engines have high compression ratios when the infusion of air and fuel occurs differently. Gasoline cannot generate the same compression ratio because it is more likely to auto-ignite. Diesel is less volatile, so it has a low self-ignition temperature, allowing it to burn when sprayed on heated air. When the pressure stroke sucks air, the air is compressed by a piston resulting in the air getting heated. The diesel’s high compression ratio makes it possible for the diesel to be sprayed as droplets over the heated air. Given its low volatility, the diesel no longer needs a high temperature to auto-ignite.

Conversely, the risk of engine knocks and the explosion of the air-fuel mixture is high with the gasoline engine. The reason is that gasoline does not work the same way diesel does at high temperatures ratios, so the gasoline will pre-ignite easily, leading to engine knocks. Since diesel is less volatile and has a low auto-ignition temperature, it burns easily, eliminating the need for a spark plug. So do diesel engines have carburetors since they do not have sparkplugs? The answer is no.

How Many Spark Plugs Does A Diesel Have?

None. Since the spark plug plays no role in the process, there are no spark plugs in a diesel engine. The diesel engine injects atomized fuel into the cylinder, where it is ignited by the compression of the engine, heating the air-fuel mixture. So how many spark plugs does a diesel truck have? The answer is none.

What Happens If Spark Plug Is Used In Diesel Engine?

Will A Diesel Start Without Glow Plugs

No. This is because there would be a lack of compression. A certain compression ratio is required to generate the heat that atomizes the diesel. In addition, glow plugs are essentially starting aids so without them, diesel will not start. However, it is possible to start a diesel engine with bad glow plugs but it will take a longer time.

What Do Diesel Engines Use Instead Of Spark Plugs

Since the combustion of fuel in diesel engines does not require spark plugs, some other component replaces it in the engine. This component is called a glow plug. A glow plug is an electrical heating device that is situated in each of the engine’s cylinders. It is a piece of metal that is structured so that there is a heating element at the tip that emits light when heated. When diesel is sprayed on the glow plug, the diesel mixes with the compressed air, evaporates and starts the combustion process. How many glow plugs does diesel have? A diesel engine can have four to ten spark plugs depending on how many cylinders the engine has. One glow plug for each cylinder.

Why Is The Spark Plug In A Diesel Engine Unnecessary

A spark plug is unnecessary in a diesel engine because it is not required to induce the diesel’s combustion. With diesel engines, the air is sucked into the engine’s cylinder, where it is compressed by high pressure. This high pressure increases the temperature to the point where it can ignite the diesel when it is supplied at the end of the compression stroke. Once the diesel is ignited, the gases expand, and the power stroke is gotten. As such, the spark plug plays no role and is redundant to the process of fuel combustion in diesel engines.

If you read the article up to this point, you already know the answer to the question, “Do diesel engines have spark plugs”. Just in case you skipped through the article, the answer is no. And that is mostly because the diesel system has a combustion system that eliminates the need for a spark plug. Instead, the diesel engine uses a different plug called the glow plug, which is different in shape and function than the spark plug.

link to Symptoms of Bad Tie Rod Ends: What You Should Know

Have you ever noticed that annoying vibration when seated in a vehicle as it accelerates? Well, that could be due to a bad tie rod end. Reduced ability to steer, squeaky sounds from quick turns, and...

Windshield wipers are great for safe driving, as the rubber wiper blade moves across the windscreen, taking out dust, moisture, and films of ice. Thus, it ensures that drivers get a clear vision...