A catalytic converter’s worth is jointly derived from the three main precious metal components – platinum, palladium, and rhodium. Therefore, finding out how much each element is in the converter will help rank these metals based on their level of value in the market.

The subsequent sections reveal how much rhodium is found in a catalytic converter, how to recover the metal, and the separation process required to get it from platinum. 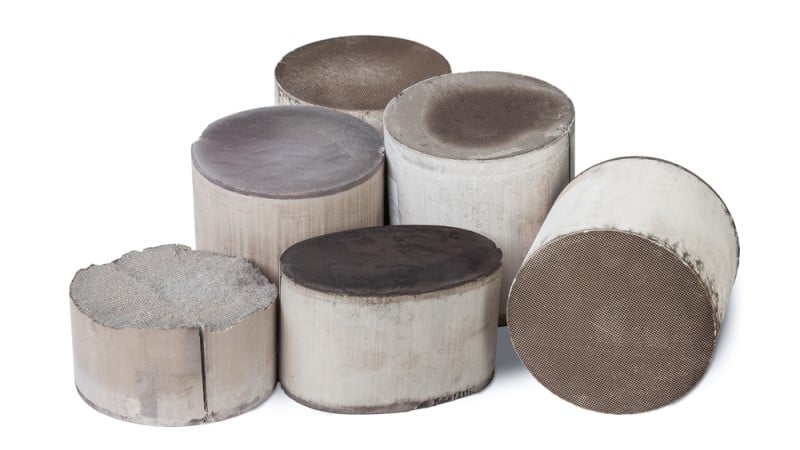 How Much Rhodium is in a Catalytic Converter?

Though it may be difficult to state how much rhodium is in a specific converter, the above figures define the sum of rhodium in most standard cat converters. The extent to which a converter is built depends on the vehicle manufacturer and the country.

While some countries may be lenient in tackling emissions issues, others can be extremely strict about punishing offenders who do not meet the emissions regulations standards.

So, comparing the converters in cars of the same categories from two countries may not be the same. This is typical because of the strictness of the Environmental Protection Agency in the U.S. compared to other countries.

In any case, even a car’s cat-con with the smallest amount of rhodium is still a target for catalytic converter thieves. This is because the component has some economic value, hence the reason why the number of stolen cat converters has continued to leap from one year to another.

Whether you have a working converter or a used one, the component commands financial value regardless. That means you can sell your old converter for a few dollars once you replace it. Kindly check out the price online or contact a scrap metal buyer near you.

What is the Reason for Rhodium in a Catalytic Converter?

The presence of rhodium in a catalytic converter is meant to reduce the degree of nitrogen oxide (NOx) pollutant released from a vehicle’s exhaust pipes into the atmosphere. This helps to control the air pollution rate, to which an internal combustion engine’s operation is a major contributor.

The rhodium in a cat converter synergizes with platinum and palladium to neutralize the pollutants from a vehicle’s exhaust into a less toxic substance. The target neutralization here is the tolerance limit in the atmosphere.

Rhodium is so powerful that it serves as a catalyst for making acetic acid, nitric acid, as well as hydrogenation reactions in the chemical industry. In addition, its ultra-shiny, corrosion-resistant nature makes it a useful metal in many industries; hence, it found a place in the catalytic converter.

Converters do not tackle emissions issues in isolation; the precious metals in the component are the main reason why the cat can effectively minimize emissions problems. However, besides their original use, the precious metals still have an extra economic value due to their wide range of industrial and commercial usefulness.

In other words, even a bad catalytic converter can still be sold for money. Unfortunately, some criminally minded folks will not miss an opportunity to steal a cat converter even while it is still useful in a car.

While virtually every car is built with a catalytic converter, Toyota Prius seems to be one of the cars with the most rhodium, palladium, and platinum than many other vehicles.

In case you drive a Prius or any other internal combustion engine-powered vehicle, kindly note that the rhodium in your old converter can be recovered and sold to scrap metal dealers. So, if you replaced a bad catalytic converter, you may want to find out how to recover the rhodium from your old converter. 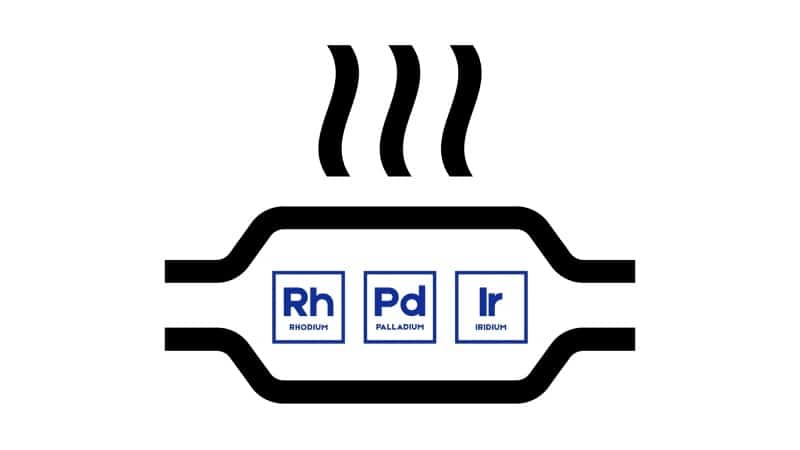 How to Recover rhodium from Catalytic Converters

Recovering rhodium from a catalytic converter is pretty much like extracting platinum. However, there’s a slight difference in the process towards the end.

If you have a used cat converter and you’re wondering how to get rhodium out of a catalytic converter, follow this procedure with utmost care.

First of all, get your safety kits, like a pair of heavy-duty hand gloves, protective eyeglasses, etc., ready before commencing the task.

Afterward, go underneath your car, unscrew the cat converter’s bolts, and take it out. You can also use a flame cutter to separate the cat from the area where it is fitted under the vehicle.

Once you get the component down, use the cutter to split the honeycomb-like structure where the metals reside in the catalytic converter.

Ensure to cut the component carefully to avoid any injuries. Then, remove the platinum with a pair of box cutters or peel them off with your hands.

Once you have the platinum, carefully crush it to powder with a rod mill. The outcome should be around -70 mesh. Next, get a mixture of agents to help with the chemical processing.

Use an aqua regia mixture.

The aqua regia mixture consists of nitric acid and hydrochloric acid. Ensure to mix the solution carefully and charge the Regia to a reactor. After that, heat the system to the desired temperature level. Once it gets to a pre-set stable value, add the metal powder to the reactor.

Thereafter, stir the reactant mixture at about 700 rpm at atmospheric pressure. Then, use a pipet to take the leachate at a regular interval and filter to get rhodium.

Please, kindly note that this is a task for the professionals. Therefore, contact a local scrap metal yard to help recover the rhodium in your old catalytic converter. Yes, the process can be risky for a DIYer due to the various activities involving corrosive acids or chemicals.

How Do You Separate Rhodium from Platinum?

Once you have the soluble salt from the extraction of platinum, you can proceed to separate rhodium from it. In order to get the soluble rhodium salt, the process requires chloridizing the solution in a chlorine atmosphere.

Again, this is a task for professionals. If you want to extract/separate rhodium from the platinum group metals, ensure to contact the designated experts who are trained for the task.

Q: How much is the rhodium in a catalytic converter worth?

If you’re contemplating, “How much is the rhodium in a catalytic converter worth?” According to Money Metals Exchange, 1 gram of rhodium is worth around $485.48 based on the leap experienced by the metal over time. So technically, 2 grams of rhodium would cost about $970.96.

In other words, a standard catalytic converter with around 1 – 2 grams of rhodium would cost between $485.48 and $970.96 in the market. This is quite some money. No wonder cat converter thieves would do anything possible to steal a careless owner’s catalytic converter.

Q: What has the most rhodium in it?

The Ural mountain in South Africa, Russia, and Canada have the largest rhodium concentration in the world. To be specific, South Africa ranks the highest producer of rhodium globally, with about 81% of the world’s export as of 2020.

Rhodium is quite rare; hence, the amount of worth that is attached to the metal. Nevertheless, South Africa is naturally endowed with precious metals as part of the country’s mineral resources.

Q: What cars have the most rhodium?

If you’re asking, “Which catalytic converters have the most rhodium?” Some of the cars with the most rhodium in their cat converters include the Ferarri F430, Ford Mustang, Ram 2500, Ford F250, etc. This is part of the reasons why these cars are luxury automobiles in the industry.

Replacing a Ferrari F430’s catalytic converter will cost around $3,770. Whereas the car is fitted with two cat converters with an estimated value of $7,540.

Q: How much is a gram of rhodium?

A gram of rhodium is about $485.48 as of August 2022. The value of rhodium and other precious metals is most likely to fluctuate due to their price volatility in the metal exchange market. In any case, the metals experience more high-level fluctuations than low-level ones.

This is why precious metal theft specialists will not give up on looking for the next catalytic converter to steal, despite the number of already missing cat converters. Therefore, ensure to protect your car from any intruders.

Q: What is the scrap value of rhodium?

If you’re asking, “What is the scrap rhodium price?” The scrap value of rhodium is about $13,600 per ounce. However, the volatility of the value of precious metals may affect this figure within a short time. So, if you have a bad catalytic converter, you better sell off the rhodium and other metals in it shortly.

Meanwhile, this is also the best time to secure your car from catalytic converter vandals who won’t miss a chance to cart away the component from your car. Therefore, it is advisable to always park in safe and lighted areas, especially at night.

Ascertaining how much rhodium is in a catalytic converter is pretty straightforward. However, extracting the precious metal is a risky task due to the several chemical activities the extraction process involves.

Therefore, if you need to recover the rhodium from your old catalytic converter, ensure to consult the professionals. However, whether you just replaced a bad cat converter or not, carefully protect your car from dubious individuals who are specialized in converter theft.