Rust kills the magnificent look and aesthetic appeal of your car. Yes, we know that, but it can damage much more than your car look. It can damage your car structure and even affect performance if it gets to the engine bay. That’s why you need to prevent rust on your car.

Here, Rx Mechanic team of experts will explain the causes and how to prevent car rust. Whether you have rust on the undercarriage of a car or the painted areas, you’ll find solutions in this article. Grab a seat and have 5 minutes read.

Why is my car rusting?

Rust is every motorist’s nightmare. But unfortunately, it’s a matter of time for your car to rust. That’s why you need to take preventive measures (more about that in the next section). Here are the common causes of car rust. 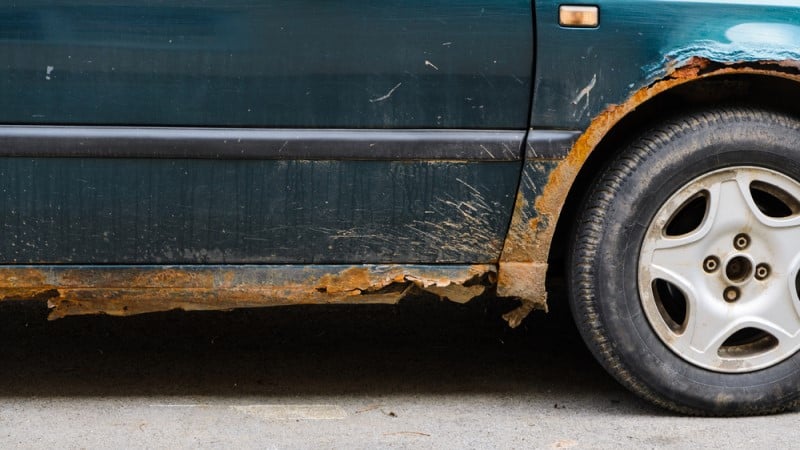 If you live in areas with salt roads, always find alternative routes for your daily commute. Salt makes metal vulnerable and susceptible to rust. Again, most car owners travel on road salts more often during cold winter to remove snow and ice on their baby rides.

Salt can accumulate on the car undercarriage and degrade the metal components, leading to rust.

A common cause of car rust is rainfall. When rain falls on iron material, it creates moisture, resulting in rust. When two substances have contact, they cause atomic reactions that lead to oxidation. Rain is the most common parameter that exposes your car metal to oxidation. Ensure you properly park your car in a garage when the weather is cloudy.

The importance of imbibing regular car maintenance cannot be overemphasized. As common as not regularly washing a car is, it can cause rust. Therefore, wash your car regularly and contact your mechanic whenever you notice an issue.

Here are the effective and common ways of preventing car rust.

This may sound very simple, but washing your car regularly will help prevent rust in the long run. Let’s get this straight; dirt does not cause rust directly. It only damages the protective layer of the clear coating on the car, exposing it to rust. So, if you were asking, does washing a car prevent rust, you now know the answer.

Calm your nerves and hear us out. If you spill a drink on your car carpet and ignore it, it will sink inside. And if it drips on the metal components, it may rust that surface with time. Unfortunately, you may not notice it until it’s too late.

One of the tips on how to prevent car rust under a car is to keep the interior clean. Mopping spilled drinks will make a big difference. So, always keep your car clean always.

Rinse your car after a trip

Driving on salt roads can create room for salt to hang on some undercarriage areas, causing rust over time. Therefore, rinsing your car after every trip, especially during winter, will help prevent car rust. Regular rinsing is the answer if you wonder how to prevent undercarriage from salt rust.

We know that car paints provide an aesthetic feeling to your car. But you may not know that it serves as a shield against car rust. Always pay close attention to the clear coating and car paints. Once the car paint starts flaking or peeling off, it’ll expose the car’s metal parts to water and start creating rust.

If your car scratches or the paint starts peeling off, contact a nearby auto detailing shop to fix it.

If you’re looking for how to prevent car rust from spreading, get an anti-rust spray. If you see rust around your car, tackle it before it spreads. You won’t need to contact an auto detailing technician if you notice the rust early. A bubbling spot on the painted work is an early sign of rust.

Once you notice this, clear the bubbling spot and allow air to dry the moisture. After that, apply the anti-rust. This is an affordable option if you’re on a budget.

Years back, waxing cars was the best approach to protect a car from exterior damage. However, auto detailing experts recommend ceramic coating as the best and most cost-effective method of preventing exterior damage to cars, including car rust.

You can apply this polymer liquid to the car paint, and it’ll bond and stick with it even in severe weather conditions. Car waxing can last only a few months, but the ceramic coating can last up to three years.

Most motorists and car owners often overlook drain plugs when washing their cars. The drain plugs can accumulate dirt and clog, allowing water to dump in them when you wash your car. So, cleaning the drain plugs can help you prevent car rust in the long run. You can find the drain plug along the edges of the hood and trunk and under the car doors. 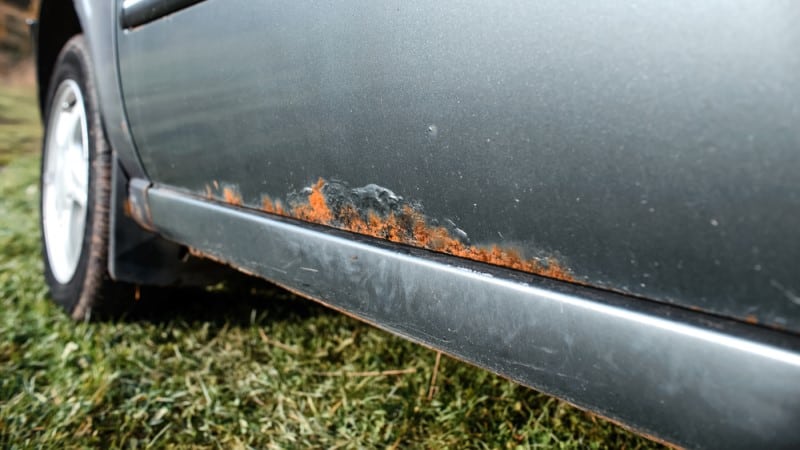 Read Also: What is a Rust Converter? All You Should Know

Regularly washing your car helps to prevent key elements that lead to car rust. A full-service car wash helps remove dirt on the protecting paint layer. As reiterated above, the undercarriage is also exposed to car rust. So, rinsing this part will also help prevent rust.

Q: What can I use to protect my car from rust?

While protecting your car paint from rust is important, using the right approach is more important. There are several methods to protect your vehicle from rust. However, here are the best approaches to deploy.

Q: How do you use a rust arrestor on a car?

Rust arrestor is a DIY primer that prevents rust from damaging your clear coating and paintwork. To use the rust arrestor, sandpaper the rusted areas and prepare them for the arrestor application. After that, apply a thin layer of the arrestor on the sanded, rusted surface.

After that, apply a thin layer of all-purpose paint primer on the rusted surface. Do not apply it much to prevent dripping. After that, allow the primer to dry completely. Next, apply touch-up paint on the rusted area.

Waxing a car is one of the best and most affordable ways to prevent car rust. Car wax creates a protective layer against normal wear and tear on the paintwork. It does much more than protect the car against rust; it also protects the paintwork. This means the metal body is exposed to rusting once the paintwork peels off.

The WD40 is a powerful adhesive product that is a moisture displacer, penetrator, lubricant, and rust preventative. Its lubricating properties lose clung components and remove rust on cars. In any case, it does not only remove rust; it prevents rust. It achieves this by adding a protecting layer on the applied surface that protects the surface from rust.

Q: Which cars rust the most?

Car rusting is sometimes unstoppable, but you can extend the vehicle’s life with undercoating and rustproofing. Undercoating the vehicle will prevent corrosion and rusting for an extended period. When looking for how to prevent rust on the bottom of a car, think of undercoating. It is an effective method for such tasks.

When you think of cars produced in the 70s and 80s, you think of rust. This is because of several factors, including the materials used in production. However, modern cars are not immune to rust, but corrosion and rust are not much.

Q: Why do Japanese cars rust?

Japanese manufacturers have their cars improved over the years, but if you live near a coast or regularly travel on salt roads, you’ll know these brands rust more than others. These brands are prone to rust because the manufacturers use thinner sheet metal.

This material is economical, but they degrade faster, forming corrosion and rust and making the vehicle unsafe to drive, especially if the rust occurs under the carriage.

Rust formation is not good for anything and worse for cars. Whether your car model is prone to rust and corrosion, you should know the probable causes and how to prevent car rust. This will help you prevent corrosion and rust on your car.

We’ve outlined several suggestions for preventing car rust from spreading and the various causes of car rust. Choose the method most suitable to your needs to protect your car’s paintwork and metal from corrosion. Thus you can keep your car aesthetics up and prevent premature decay of the car components.

Regardless of your preferred method, always wash your cars regularly. As simple as it may sound, it could be all you need to prevent car rust.