Undercoating vs. rust proofing is two car treatments that help to sustain a vehicle’s lifespan. However, there is a difference between the two operations. Although both treatments help to fight against corrosion, they are designed to be applied to different areas of a vehicle.

This article defines the purpose and uniqueness of undercoating and rustproofing a vehicle. It also reveals every other thing you need to know about these operations in a vehicle.

If you’re wondering, “Is rustproofing and undercoating the same thing?” take a moment to read about both treatments separately and their difference in the subsequent sections below. 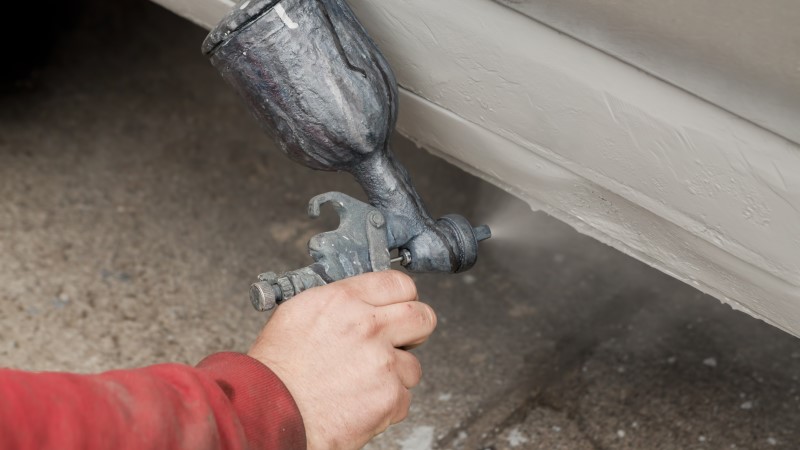 Undercoating is the application of rubber or wax-based composite treatment substance to the entire underside of a vehicle for protection against corrosion. It is designed to create a coated layer on the underside of the vehicle.

This coated layer serves as a barrier between the vehicle’s underside and abrasive substances like snow, ice, salt, etc., on the road surface, which can damage the vehicle in the long run.

Undercoating protects virtually every part of your vehicle’s undercarriage, including the wheel wells, floorboards, and frame. Although your car’s underside is not exposed to people’s eyes when you drive, ensuring proper maintenance of that area will help sustain the car’s lifespan.

Read Also: Woolwax vs. Fluid Film – Which One to Go for? 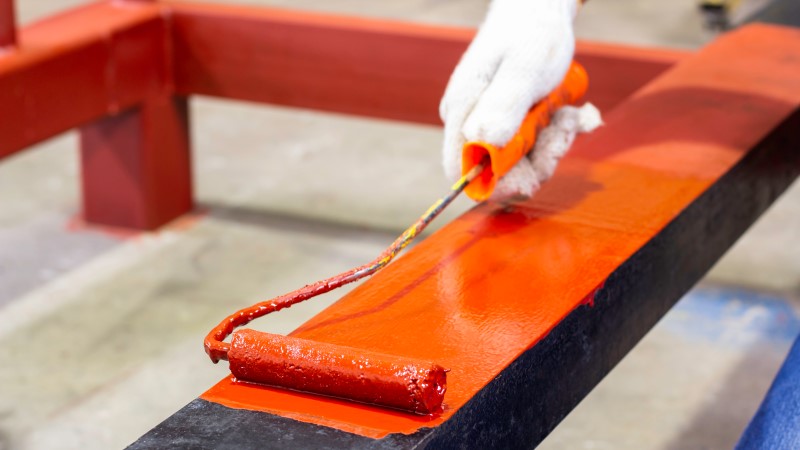 On the other hand, rustproofing is the application of anti-corrosion treatment to critical hard-to-reach parts of a vehicle where rust forms easily. Rustproofing requires spraying a car treatment wax that is designed to help deal with rusty car parts.

The upper body panels, tailgates, fenders, etc., are exposed areas where water can easily accumulate and form rust over time. So, rustproofing helps to keep these areas protected from the negative effects of corrosion.

Rust spreads in a subtle way that you may not notice until the coverage becomes significant and fully obvious to the eyes. Hence, you must tackle the situation before it causes severe damage to your car.

Read Also: What is a Rust Converter?

Rustproofing Vs. Undercoating – What’s the difference? 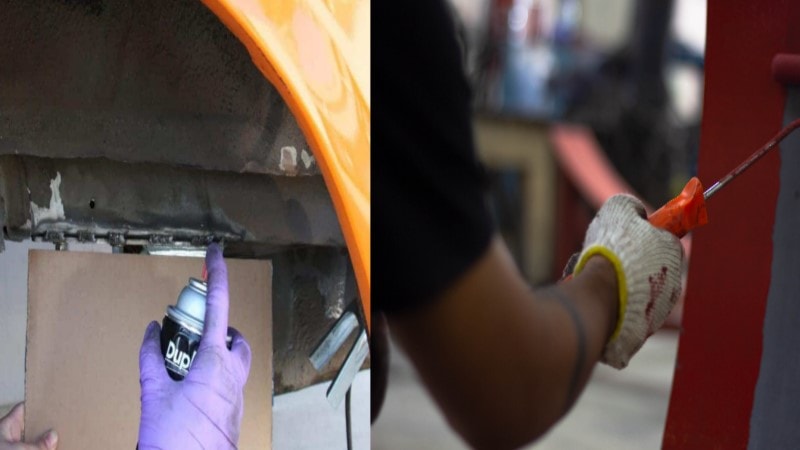 It is pretty simple to spot the difference between undercoat and rustproofing based on their area of application.

So, technically, undercoating is applied on the underside of a vehicle to create a layer between the vehicle and corrosion-causing substances like snow, ice, mud, debris, etc.

Conversely, rustproofing is the application of wax-based protective spray on a vehicle’s body and other parts where water can easily accumulate and form rust over time.

Meanwhile, if you’re contemplating the essence of both undercoating and rustproofing in a car, it is important to understand that they help to protect different parts of a vehicle. Hence, one treatment is not estimated as more important than the other.

Read Also: What is Dielectric Grease

Q: Are undercoating and rust-proofing worth it?

If you’re contemplating, “Is it worth it to undercoat and rustproof?” Undercoating and rustproofing are vital for older vehicles. This is because both applications help to protect the vehicle against the abrasives on the road that are capable of causing corrosion on the vehicle’s underside and other parts.

However, modern vehicles do not need undercoating or rustproofing because they come with corrosion protection from factories to keep corrosion at by for their lifespans.

Manufacturers now ensure that they critically design every component of their vehicles to make sure that they reach their lifespan without any further ad-on. But unfortunately, some modern car owners still opt for undercoating or rustproofing to protect their cars against corrosion.

Not really! Undercoating can do so much in helping a vehicle reach its lifespan. However, the substance may not be able to stop rust completely. Once a vehicle’s underside starts rusting, it can spread over time until the area is completely damaged.

However, applying undercoating to the underside – especially the rusting area will protect the vehicle from damage faster so that it reaches the expected lifespan.

So, if you’re experiencing corrosion around your car, apply undercoating to help protect against the effect of the corrosion.

Q: Is it worth undercoating a rusty car?

If you’re wondering, “Is underbody rustproofing worth it?” Of course, undercoating a rusty car is worth it. Undercoating provides protection against corrosion which can lead to wear and tear as quickly as possible. This can shorten a vehicle’s lifespan.

So, an older car’s lifespan can be extended with undercoating. The substance is designed to create a defense against corrosion that results from the abrasives that affect a car from the surface of the road while driving.

Meanwhile, modern cars may not need undercoating because manufacturers design their components with factory-fitted corrosion proof. So, if you drive a new car, adding undercoating may do more harm than good.

Q: When should you undercoat your car?

Summer and spring are precisely the best time to undercoat your car before winter sets in. The environment is usually very good during these seasons.

The challenges you may likely face during winter can affect your car badly if you fail to undercoat during summer and spring. So, in order to avoid the negative impacts of snow, ice, and the freezing temperatures of winter, prepare adequate protection for your car.

Q: Is it worth getting undercoating?

You will be happy to know that getting undercoating is not necessary on modern cars if you worry, “Is undercoating necessary?” This is because manufacturers include corrosion protection in their design straight from the factory. So, going for undercoating after buying your car may be a waste of time and money.

In some cases, undercoating a car that already has factory-fitted corrosion protection can result in unexpected damage. However, you can get undercoating for an older car if you own one. It helps to protect the car against corrosion and extend its lifespan.

Q: Is undercoating worth it on a new car?

According to Consumer Reports, it is best for car owners to forego undercoating their new cars because they have factory-fitted corrosion protection. In fact, adding undercoating to a new car will rather damage it instead of protecting it.

Therefore, undercoating isn’t worth it on a new car. There is no point in adding undercoating when you already have it on your new car. Manufacturers continue to upgrade their innovations and designs to ensure that new cars come with everything the car owner would ever desire.

Q: What’s the best undercoating for a vehicle?

These undercoating brands are tested and trusted. They are proven to provide maximum protection against corrosion for a vehicle.

For instance, Woolwax automotive undercoating is designed with anti-wash-off, which protects the vehicle even when you go for a wash after the undercoating. Some of the best rust-proofing products also come with this feature.

Q: How long does undercoating last on a vehicle?

Most undercoating brands are designed to last one year. So, it would be best to reapply the undercoating every year to ensure that the vehicle stays protected throughout its lifespan. Therefore, you can add this to your yearly routine maintenance for your car.

It is important to understand that nothing lasts forever. This helps car owners to draw up a scheduled appointment to perform routine maintenance on their cars regularly, usually every year, for undercoating.

Q: Does undercoating void the warranty?

Not really! Undercoating does not void a vehicle’s warranty in most cases. However, it is vital to get this assurance from your car dealership instead of living in assumption.

Meanwhile, you must understand that some vehicle parts like the sensors and other electrical components may be damaged when you spray them. So, you must ensure to get a confirmation from your dealership concerning the issue of undercoating and your car’s warranty.

Also, note that it is not enough to get a verbal affirmation that undercoating will not void your car’s warranty, ensure to document this affirmation for proper reference in the future when necessary.

Although vehicle enthusiasts use rustproofing and undercoating interchangeably, they are not exactly the same car treatment.

Irrespective of the similar goal of protecting a vehicle against corrosion, rustproofing covers the body and other parts that your hands may not be able to reach.

Meanwhile, undercoating protects the entire underside of a vehicle from corrosion. So, if you were confused about the purpose and uniqueness of the two operations, this article has exposed all you need to know about undercoating vs. rust proofing.