A common discussion that you will find in many auto enthusiast circles is hydrogen vs. electric cars. The two types of vehicles are all the rage as they seek to popularize the use of clean fuels. Which car is the best and why, and which will take over the future? These are questions that you are likely to encounter in such discussions.

You are in the right place if you have such queries. Hang on as we go through this discussion and come up with answers to questions you may have unanswered.

How Does a Hydrogen Fuel Cell Car Work? 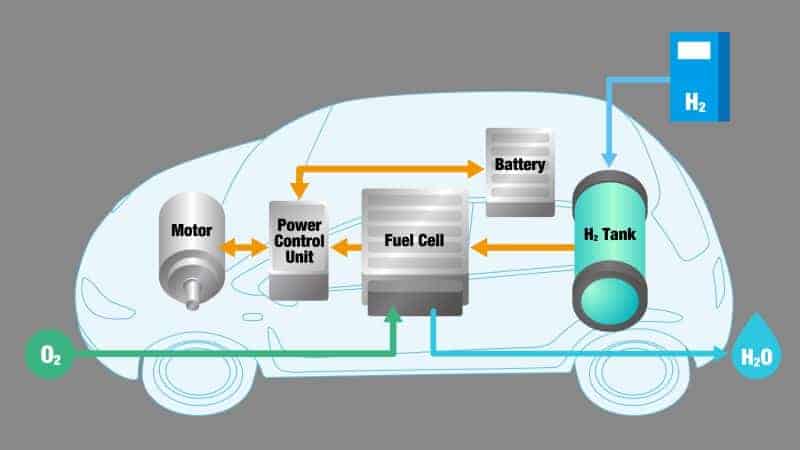 The basic unit of hydrogen fuel vehicles is the hydrogen fuel cell. The fuel cell is like the battery in the hydrogen car, where an electrochemical reaction occurs between hydrogen and oxygen to produce energy. The byproduct of the reaction is water, which is safe for the environment.

The construction concept of the fuel cell is similar to that of the standard battery, featuring an anode and cathode. A hydrogen fuel tank contains hydrogen for the reaction whereas oxygen comes from the atmosphere.

Hydrogen, as usual, enters the anode, where its electrodes get stripped. Conversely, oxygen from the surroundings enters the cathode. Here, a membrane separates the cathode and anode. The positively charged protons move across the membrane, which can be an electrolyte in some cases, to the cathode. On the other hand, negatively charged electrons use a different route via a circuit to produce electricity.

The protons meet oxygen at the cathode to produce heat and water. The fuel cell requires a catalyst, which hastens the reaction between hydrogen and oxygen. And the best catalyst to use in the hydrogen fuel cell is platinum. However, it is pretty expensive, hence the hesitance to fully adopt hydrogen to power cars.

The good news is that several affordable options are coming up to replace the costly platinum. A solid solution relies on iron, nitrogen, and carbon bases. Components to know about the hydrogen fuel cell include a fuel cell stack, which is an aggregation of many fuel cells that produce power from oxygen and hydrogen.

Some cells have anode and cathode catalysts. The former, which is mainly platinum, help split hydrogen into ions and electrons. As for cathode catalyst, nickel is the preferred suggestion, which aids in converting the free elements to water vapor, which is the waste product.

An auxiliary car battery provides the power required to start the car and powers other accessories in the vehicle. The electrical traction motor draws power from the fuel cells to run the car’s wheels.

The power electronics controller handles the electrical flow from the fuel cell and traction battery.

It controls the speed of the motor. The other component is the thermal system, which provides an optimum working temperature for the fuel cell and power components.

Are Hydrogen cars Better for the Environment than Electric?

Which is better, hydrogen or electric cars? We have to look at several parameters to get to the root of this debate. The two are similar in several ways like they both have a positive environmental impact.

You can find a parameter from the hydrogen vs. electric car efficiency argument, where electric cars seem to be better, with an efficiency rate of 75-90%. Hydrogen cars come short, with a 30-40% rate, as most of the power gets lost during hydrogen production. The efficiency can be less with the involvement of alternative fuels in producing this gas.

Still, on hydrogen fuel cell cars vs. battery electric cars? The latter has several charging stations spread in different parts of the country. Presently, hydrogen filling stations are fewer but are growing at a steady rate.

Hydrogen cars beat electric ones in filling time. It may take up to 30-minutes to charge an electric car battery, but only 5-minutes or less to fill a hydrogen fuel tank. Presently, hydrogen cars appear to be pricier than their electric counterparts.

To judge by price, the main reason for the high cost of hydrogen cars is the price of hydrogen production. The price will probably go down with the evolution of newer and more cost-effective ways of producing this gas.

Not to miss, hydrogen fuel is an excellent option in heavy-duty settings like rockets, marine use, trains, and buses. While electric batteries can also do an excellent job in such settings, the efficiency may be Low.

What Hydrogen Cars Are Available in The USA And UK?

Many notable car manufacturers are falling for the hydrogen fuel cell vehicle concept, with a decent number of models coming out. To take names, Toyota and Hyundai seem to be the market leaders, with several units under production.

Toyota has the Mirai, a full-size executive sedan that has been in production since 2014. It has been performing well in the US, with sales of over 9200 units as of December 2021. It is also available in Denmark, Germany, and the UK, where it also sells well.

The Hyundai ix35 FCEV, also going by Tucson FCEV, is Hyundai’s hydrogen fuel car. It was in production since 2001 but got replaced by the Hyundai Nexo in 2018 for the 2019 model year. It is a compact crossover sports utility vehicle with a 156-liter hydrogen fuel tank capacity.

Also, there is the Honda Clarity, which was under production from 2008 to 2014 and then from 2016 to 2021. Hydrogen-driven cars are still few, but we will see a hike in the number of vehicles with developments in hydrogen production technology. 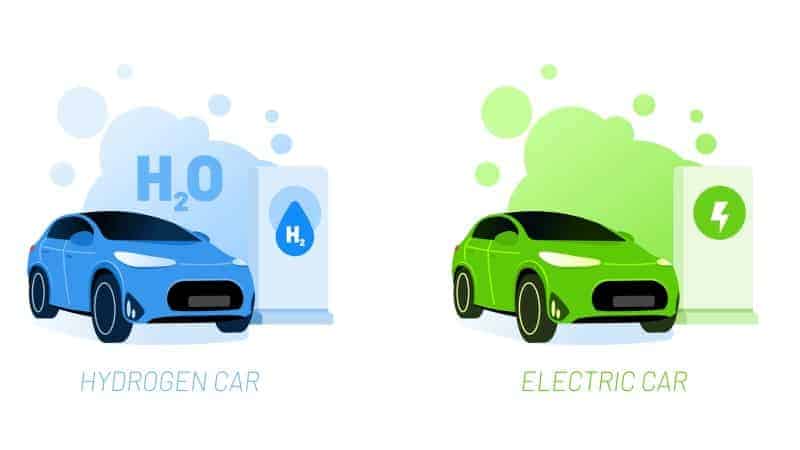 The main difference between hydrogen and electric cars is the fuel. Electric cars run on electricity while hydrogen cars run on hydrogen. Both forms of propulsion are clean and help in environmental conservation.

Hydrogen vs. electric cars Reddit discussions point to the price of the two vehicles as another significant difference. The average price of hydrogen cars is higher than that of electric cars. It explains why you find more electric vehicles on the streets than hydrogen ones.

The other difference is the availability of refilling stations. Electric car technology took the auto industry by storm, evident from the numerous recharging stations spread widely. On the other hand, hydrogen filling stations are fewer, which makes this fueling option pretty unreliable.

In addition, hydrogen fuel technology is suitable for heavy-duty applications. It is practicable for trains, buses, and marine settings. Electric cars do well for smaller applications like sedans, forklifts, and other small vehicles.

Q: Why Are Hydrogen Cars Not Popular?

Hydrogen cars are excellent fuel for vehicles, seeing that they are clean. It is not that popular as a standard fuel due to the associated expenses. Production of hydrogen gas is costly, making the cars equally pricey. The other reason is the low number of refueling stations. If you do not have a backup fuel tank, you may get stranded.

Q: Is There a Future for Hydrogen Cars?

Hydrogen cars are the future, seeing their positive impact on the environment. A hurdle to the mass production of cars is the cost of producing the gas. The good thing is there have been strides to make production cheaper. In the future, more brands will come out, seeing the impressive performance of the Toyota Mirai.

Tesla focuses on electric vehicles and is one of the prominent players in electric car manufacturing. It is unlikely that Tesla will have hydrogen cars, seeing the strong views Elon Musk, the CEO of Tesla, has against hydrogen fuel cells. He mostly hits at the power inefficiency of the hydrogen fuel cell cars.

Hydrogen is a flammable gas that can explode if not handled correctly. The good news is that explosions are rare due to the sturdy construction of the fuel relay systems in the vehicles. The cars undergo testing to ensure they are roadworthy, with zero chances of bursting into flames.

Q: Are Hydrogen Batteries the Future?

Hydrogen batteries are a clean energy source whose waste products are water vapor and heat not a threat to the earth and environment. It is a power source of the future, so long as suitable measures are in place to boost its efficiency.

Q: What Is Wrong with Hydrogen Cars?

Some of the disadvantages of hydrogen cars are inefficiency, high cost, and insufficient filling stations. All the issues will get sorted with technological improvements in the processing of this fuel. For instance, the cost will be low with the adoption of other catalysts besides platinum, which is reliable but pretty expensive.

Q: Is Hydrogen Cleaner Than Electric?

Focusing on the cleanest fuel source between hydrogen and electric cell, you can see it is a tie. Both have a positive impact and will be the energy of the future with a low carbon footprint. A fact to note is that hydrogen is as clean as its production method. It comes scarce if there was the use of carbon fuel during its production.

Q: How Much Is a Gallon of Hydrogen Gas?

Hydrogen gas is not that expensive, going at the average price of $1 to $1.8 per gallon. This is almost the same as a gallon of gasoline. When filling your hydrogen tank, you realize that the gas’ unit is in kilograms. A kilogram will cost you around $2.40.

Q: How Far Away Are Hydrogen Cars?

Hydrogen cars are with us now, and the path looks promising. Key industry players like Toyota and Hyundai are mass-producing hydrogen cars, and the market looks favorable. It is only a matter of time before the vehicles go fully mainstream and compete with electric cars.

Q: Will Hydrogen Cars Take Over Electric Cars In The Future?

Electric cars have a firm grip on the market, with most top vehicle manufacturers featuring electric trims. Hydrogen cars still fall short in efficiency, indicating electric cars will be the preferred clean fuel solution for a long time.

Hydrogen vs. electric, which is the fuel of the future? Both the options are clean and will aid in environmental protection measures. In this piece, we answer questions like what is a fuel cell, how it works, and the differences between electric and hydrogen cars so that you can draw a verdict on the argument.

However, while the future seems bright for hydrogen cars, the concept still has a long way to go. By making hydrogen processing cheaper and widespread erection of filling stations, hydrogen vehicles will be a mainstay on roads.