The famous maxim goes, “Change is the only constant thing,” The world of technology has solidified this statement for decades and even centuries.

Technology has constantly advanced over the years, especially with the invention of sophisticated means of transporting humans and commodities from one location to another, even from one planet to another. As a result, jets and rockets have become more popular over the years.

However, the comparison between the jet engine vs. rocket engine reveals a lot about these two phenomenal inventions. This article unveils everything you need to know about their major differences.

A jet engine is a unique reaction engine that is built in line with Newton’s third law of motion. The engine is designed with various parts such as the fan, turbine, compressor, mixer, combustor, and propelling nozzle.

If you’re wondering, “How do jet engines work?” The jet engine’s fan is designed to suck air directly into the engine to be compressed and mixed with fuel in order to ignite the combustion process. Once the air-fuel mixture ignites, the expanded gas automatically blasts out via the nozzle at the rear in order to trigger the jet to thrust forward.

The engine depends on atmospheric oxygen to initiate and sustain the combustion process that keeps it running. This is a major reason why a regular jet cannot fly outside the atmosphere into space because there is no available oxygen in that realm.

The jet engine is also known as a gas turbine. It is designed to operate with aviation kerosene which is relatively less viscous than regular gasoline. It also possesses a low freezing point compared to its other counterparts. 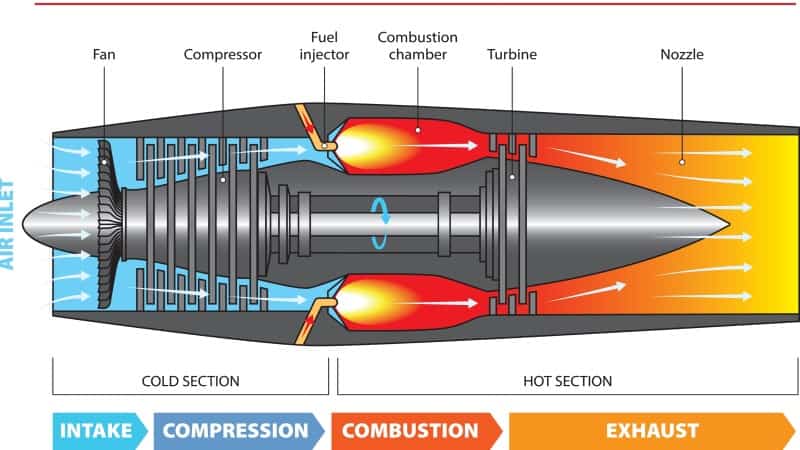 A rocket engine is also a reaction engine that is designed in line with Newton’s third law of motion. The engine produces thrust for take-off by ejecting mass rearward.

The rocket engine consists of the rocket nozzle, propellant, tank pumps, and power head. The engine is built to operate with liquid hydrogen and liquid oxygen as an oxidizer, which is mixed with exploding within the combustion chamber.

The combustion process generates hot exhaust gas, which is released through a nozzle to accelerate the flow and trigger thrust. This process does not involve the intake of atmospheric oxygen as in the case of automobiles and jets.

The liquid hydrogen is ignited with liquid oxygen that is conveyed within the rocket. The rocket fuel (liquid hydrogen) relatively has the lowest molecular weight, which makes it ideal for rockets to help minimize the weight. 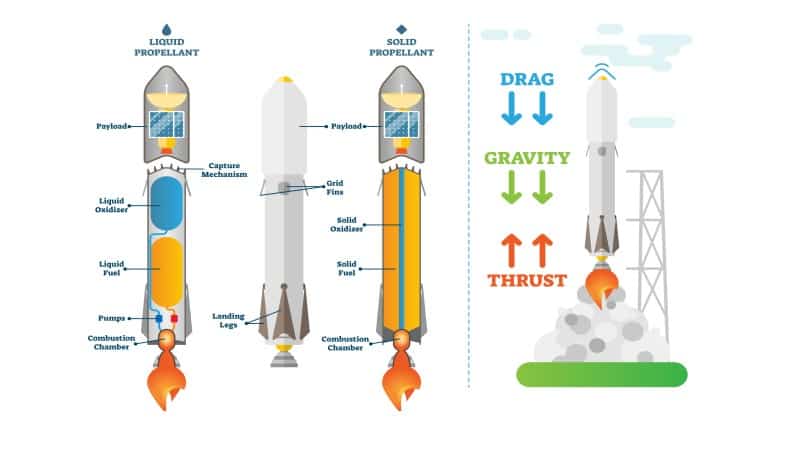 Although the jet engine and rocket engine are built to operate Newton’s third law, they involve two different sets of components in their combustion processes, which help to trigger thrust.

A couple of distinctions exist between the two engines. The following are some major differences between rocket vs. jet engines. 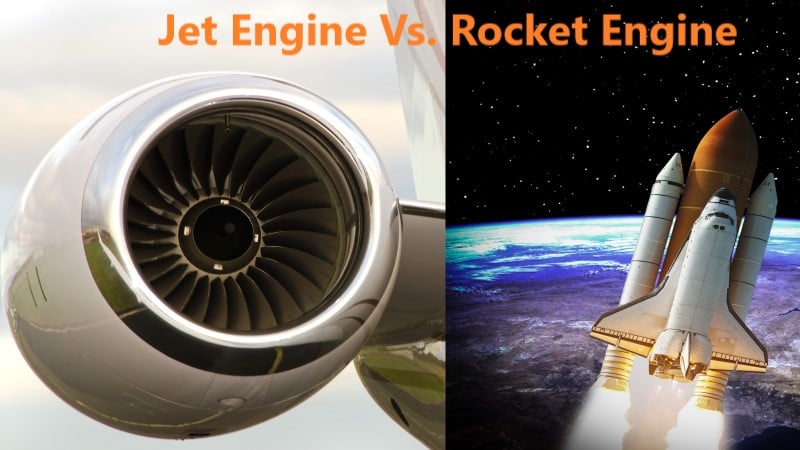 Meanwhile, a rocket engine does not rely on outside oxygen for its combustion process. Instead, the engine is designed to operate with liquid oxygen conveyed along with the rocket.

The types of fuel used in jet and rocket engines are different. While a jet engine is built to operate with aviation kerosene, a rocket engine is designed to run on liquid hydrogen. The fuel that powers a rocket is relatively more powerful and efficient than jet fuel.

Liquid hydrogen can burn without atmospheric oxygen. It is ignited with the liquid oxygen conveyed within the rocket. Conversely, aviation kerosene depends on outside oxygen to complete a jet’s combustion process.

A rocket jet engine consumes around 11,000 pounds of rocket fuel per second, which is two million times more than the fuel consumption rate of a regular vehicle. In contrast, a regular jet engine is estimated to consume around 0.683 liters of aviation kerosene per second, 40.98 liters per minute, and 2,458.8 liters per hour.

Jet engines are built to utilize oxygen from the atmosphere to burn fuel; hence, they operate like regular vehicle engines. On the other hand, jet engines do not have the capacity to breathe in space because of the lack of oxygen. This is a major advantage rocket engines have over them.

Q: Is rocket engine and jet engine the same?

No! A rocket engine is completely different from a jet engine due to the relevance of atmospheric oxygen to the latter and the presence of inbuilt oxygen in the former. Besides that, rockets are designed to thrust with the aid of the expelled gas.

Meanwhile, jets rely on their wings for lift. Due to the role of outside oxygen in jet engines, they can only operate within the atmosphere where oxygen is available. On the other hand, rocket engines can operate in space with no available outside oxygen.

Q: What is the difference between jet and rocket propulsion?

Jets are built to depend on fuel combustion with oxygen to engage the wings to thrust from the ground. Meanwhile, rockets are designed to develop thrust through the rearward release of mass at an extremely high velocity.

Q: Which is faster, rocket or jet?

Rockets fly at a very high speed because of the distance they have to cover between the Earth and space; hence, their speed is measured uniquely in meters per second (m/s) or kilometers per second (km/s). Kindly note that rockets have more force if you’re analyzing rocket vs. jet engine thrust comparison.

Q: Why do jet engines not work in space?

If you’re asking, “Do jet engines work in space?” Jet engines don’t work in space because of the need for atmospheric oxygen to aid their operation, which is not available in space. Instead, they are designed to operate within an atmosphere where abundant oxygen is available.

Jets are not built with their own oxygen to enable them to fly in space like rockets. Meanwhile, the speed of a rocket is extremely faster than a jet. Therefore, a jet will not be able to arrive in space as early as a rocket designed for that purpose.

Q: Why do airplanes not use rocket engines?

Rocket engines are relatively heavier than airplane engines. They weigh around 3,150 kilograms (7,000 pounds), making the component a big burden for an airplane. Besides the engine weight, a rocket also carries its fuel and oxidizer along with it to space.

Therefore, installing a rocket engine in an airplane will require a reduction in passenger capacity, fuel content, and cargo carriage. Since most airplanes transport lots of people and goods from one place to another, utilizing a smaller or lighter engine is better for efficiency.

Q: What are the 2 main types of rocket engines?

Conversely, the liquid rocket’s propellant, fuel, and oxidizer are stored in liquid forms separately. The fluids are pumped into the nozzle’s combustion chamber, where the burning process occurs. Liquid rockets are better than solid rockets due to their propellant, thrust, and entire system’s flexibility.

Q: Do rockets have jet engines?

Not at all! Rockets cannot function with jet engines because they are limited to operations in an environment where atmospheric oxygen is available to aid the combustion process. They cannot operate in space due to the absence of oxygen.

Rocket engines are designed to operate in space beyond the boundaries of the limitations of airplanes. They are uniquely manufactured as reaction engines capable of developing thrust through the power of the high-velocity rearward mass ejection.

Q: How are rockets similar to jet engines?

Rocket engines are similar to jet engines because they work on similar principles based on Newton’s third law of motion. They both develop thrust through a unique internal pressure difference by ejecting exhaust gas in a particular equal and opposite direction.

Both jet engines and rocket engines undergo the air-fuel mixture process that ignites the combustion in both vehicles. However, jet engines are further sustained by outside oxygen in the atmosphere, while rockets convey an in-built oxygen system for operation.

Q: What is the difference between a jet and a missile?

A jet is a kind of aircraft designed to operate with an internal combustion process alongside wings to help it thrust. It is operated and guided by pilots and is used to convey people and goods from one location to another.

Meanwhile, missiles are self-propelled and guided types of rockets built for use as a weapon of war. While a jet is built to convey people with pilots navigating the travel process, a missile does not convey humans, nor does it have a pilot.

Definitely! Jet engines need oxygen to aid the combustion process, just like a regular vehicle on the road. This is a major reason why it cannot fly beyond the atmosphere where oxygen is available in abundance.

Oxygen plays a vital role in a jet’s operations. It is involved in the air-fuel mixture that ignites the combustion process and sustains the engine continually. Typically, a jet engine cannot do without oxygen, no matter how high it flies. Besides, it can’t fly outside the atmosphere into space.

Q: How do rockets burn in space without oxygen?

Rockets are built with their unique oxidizer, usually in the form of liquid oxygen, which helps to burn the rocket fuel and sustain the combustion process. This is major advantage rockets have over airplanes. The availability of in-built liquid oxygen enables rockets to fly in space conveniently.

Due to the extra carriage of sufficient oxidizer and fuel, rockets are usually very heavy. Therefore, they are typically built to convey relatively fewer passengers than jets. Usually, the size of a crew ranges between 5 and 7 people.

Undoubtedly, rockets and jets rank as some of the most sophisticated means of transportation. The technology behind their operations is extremely amazing. However, this article has unveiled the major differences between jet engines vs. rocket engines to help draw a line of demarcation.

Other differences have also been uncovered above. Therefore, if you know someone who’s asking, “What is the difference between a jet engine and a rocket engine?” kindly recommend this article to them.