As a good car owner and driver, it is essential to understand the basic workings of your car components that keep you, your passengers, and other road users safe as you travel. Every internal combustion engine undergoes a complete combustion cycle for optimum engine operation.

During the combustion process, the engine produces an output, which has to be controlled to reduce harmful effects on the environment. And this is the job of the exhaust system.

Aside from the byproduct, the engine generates annoying noise during the combustion cycle. Here’s where the muffler steps into the game. The muffler minimizes the noise.

Let’s make it more precise; the exhaust system controls the byproduct [gas], whereas the muffler reduces the annoying noise that the engine generates during the combustion process.

This article will discuss muffler vs. Exhaust and answer related frequently asked questions. 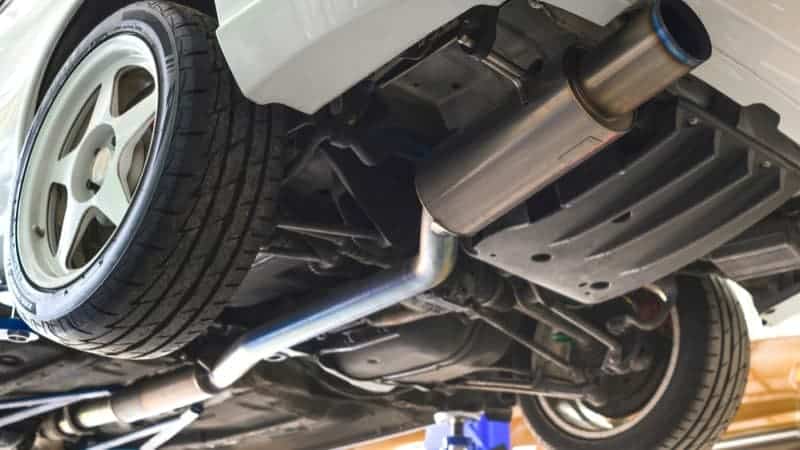 The exhaust system comprises pipes and components used in channeling out byproducts [gas] produced in the engine during the combustion process. These gases are harmful to you and your passengers if it ends up in the cabin. That’s why automakers direct it out of the cabin via piping.

The exhaust system collects the waste gas and sends it out of the car exhaust pipes. The exhaust piping connects to the catalytic converter, which breaks down the harmful gases into more minor toxic compounds.

Once the catalytic converter is done with its job, the exhaust pipe directs the less toxic gases to the muffler to play its role. What the heck does a muffler do? 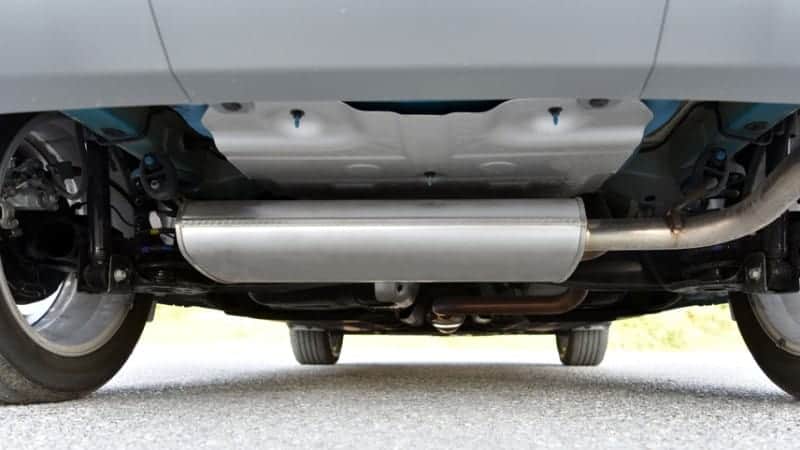 The Muffler, also known as a silencer, plays a significant role in expelling the gases produced during the combustion process. While directing out these gases, the engine makes noise. This noise varies from vehicle to vehicle; here’s how the system works.

Muffler vs. Exhaust: what’s the difference?

Let’s compare these two components to know their similarities and differences.

It is common to compare muffler vs. resonator because these two components perform similar functions. To clear the air about these exhaust parts so you won’t confuse one for another;

Automakers designed mufflers to silence exhaust noise across all revolutions per minute [RPM]. In contrast, the resonator prevents annoying droning noise or resonance, which occurs within a particular revolution per minute. Both components are essential parts of the exhaust system and do much more than silencing unwanted noise.

So both the muffler and the exhaust work harmoniously in expelling the byproducts produced during the internal combustion cycle. Both play an essential role in exporting the waste gases and reducing the environmental impact.

Q: Does a muffler make the exhaust louder?

Are you considering modifying your exhaust system, and you’re wondering if the muffler makes the exhaust louder?

The work of the muffler exhaust is to reduce unwanted noise produced during the internal combustion process, and it can’t make it louder. However, muffler delete and exhaust cutout will do a crazy job, making your exhaust louder.

Q: What does an exhaust muffler do?

As the name suggests, mufflers silence or cancel noise created during the internal engine combustion process. Engines have to generate a lot of power to drive the vehicle, and as a result, they make various pulsating sounds that echo from the exhaust valves.

ICE engines create thousands of these pulsating noises every single minute. Without the muffler, your baby ride will produce a reverberating sound.

Q: Is the muffler connected to the exhaust?

Yes, mufflers directly attach to the exhaust pipes. A muffler is a cylindrical exhaust component connected to the exhaust system for noise muffling and canceling. It is not a moving part and does not require electricity to work.

Automakers design mufflers with a set of tubes in such a way that it reduces reverberation. It significantly reduces the engine noise during its reflection process.

Q: How can I make my car louder legally?

Muffler vs. resonator deletes is an argumentative topic for folks considering making their car louder. While both muffler delete and resonator delete will present your desired loud sound, is it legal in your state?

Cars with loud exhaust can be fun to drive, but you should keep them within limits because most states in the United States prohibit louder cars. Here are reasonable ways to make your car loud in some states legally;

While taking off your muffler is against the state’s law, you can replace it with a smaller muffler to increase the exhaust sound.

You can install an aftermarket exhaust system to increase the engine sound; however, you need to ensure it doesn’t exceed 95 decibels.

You can mount a larger engine to produce more prominent noise. This is expensive and may not be worth it, but it works. You are good to travel anyway with a loud exhaust as far as it does not exceed 95 decibels.

Q: What mufflers are loud?

For whatever reason you’re searching for loud mufflers – loudness or extreme performance, consider whether or not it is legal. Here are the top six loud mufflers to try.

Q: Why are mufflers loud?

Do people hear your vehicle before they see it? That loud noise can be so embarrassing. A noisy muffler could mean the driver hit something on the road, causing leaks to the exhaust system. Rust and loosen clamps can also be a culprit, leading to a progressively annoying noise as the openings expand.

Indeed, exhaust systems in newer cars are engineered to last over 100,000 miles before going bad. Still, because the exhaust faces road conditions, it can damage much earlier without warning signs.

Q: Is it bad to drive without a muffler?

Instead of exhaust gas being expelled through the exhaust tailpipe, it’ll go out on the bottom of the car. This can cause large quantities of the waste fumes to find their way into the car cabin. The waste fumes contain carbon monoxide, which has the potential to kill you if inhaled for long.

Q: Is a muffler necessary?

Mufflers create back pressure or restrict exhaust gas flow, which slows the engine in the process of reflecting the waste fumes. That said, mufflers are necessary and are required by law to drive your vehicle with the muffler intact, so motorists that run with high-octane fuel will live without health issues.

Now, we’ve discussed muffler vs. exhaust. You now know the similarities and differences between the two components.

Mufflers and exhausts are essential parts of a car that work in harmony to make the engine faster, reduce engine noise, and offer more efficiency.

They are a blessing to the automotive world. Their presence may not be noticeable, but without them, every gasoline-powered and diesel-powered vehicle on the road would be noise and environmental pollution agents.