Your vehicle comprises several components that help regulate the flow of oil throughout the engine. And one such component is the VVT solenoid. The variable timing valve solenoid typically helps control oil flow depending on the engine’s load and speed. 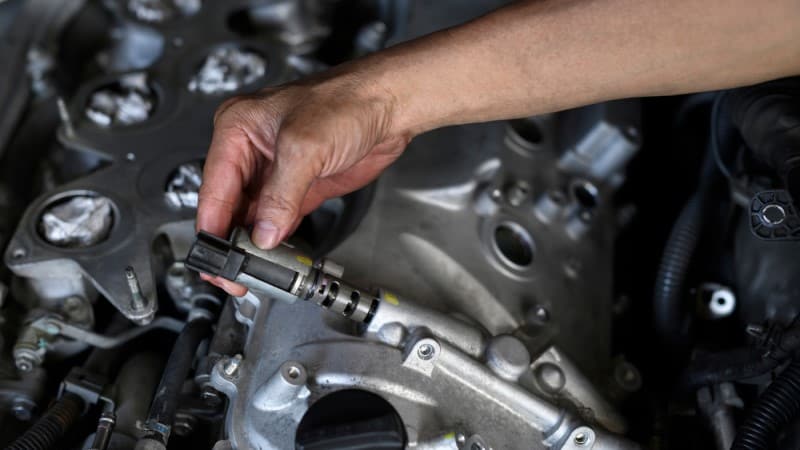 The vvt solenoid adjusts the camshaft position by either retarding or advancing it using oil pressure, allowing a smooth and effective engine operation. Generally, each camshaft is fitted with a VVT solenoid that helps change the oil pressure supply to the camshaft, depending on the engine’s load and speed.  Understand that oil control valve resides in the VVT solenoid, so they work synchronously.

As oil flows through the engine, it picks up heat and other contaminants, making the oil thicken or become too dirty over time. Therefore, one routine maintenance to keep up with is changing your oil to ensure you run on clean and less viscous oil. In fact, clean oil is essential for the easy flow of oil from the VVT to the VVT chain and gears.

If, however, you neglect this, dirty or over-thickened oil can cause a build-up of grimes or sludge on the VVT itself or your solenoid filter screen (for cars with such a screen inside the valve).  The filter screen is found on the VVT solenoid, invariably delaying oil from reaching the VVT chains and gears.

VVT solenoids are mounted on rubber bushings. These bushings over the years can wear out since they are constantly soaked in oil. Failed rubber bushings can invariably cause the solenoid to move around and stop functioning as it should.

This is why it is crucial that you also check on the condition of the rubber bushings when repairing or changing a failed  VVT solenoid.  And consider replacing these bushings if needed.

The VVT solenoid connector is attached to the engine’s top from where it functions with the VVT itself. However, it only served as a means of transferring power and never should have oil on it. With oil on, it surely won’t work as it’s supposed to. 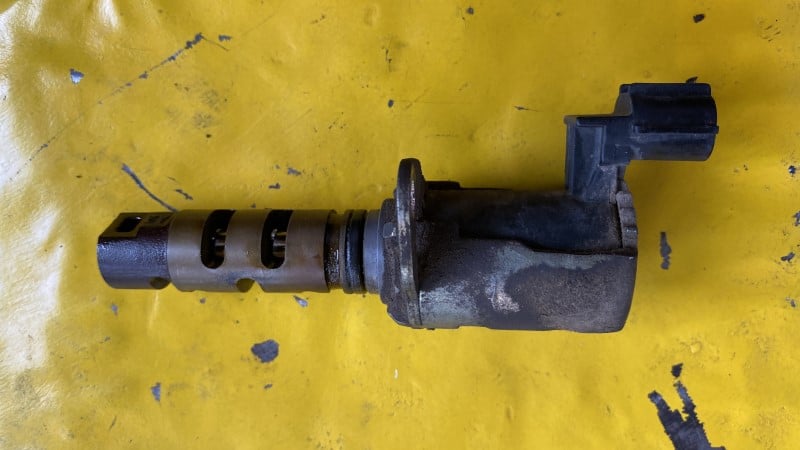 Illumination of the check engine light

Modern cars use a computer called the ECU that helps regulate the engine’s components. Therefore, if the ECU detects a fault in the VVT solenoid, it sends a warning to your dashboard through the check engine light.

However, while the illumination of the check engine light might be one of the failing VVT oil control valve symptoms, it could also mean something else. This is true because the ECU controls many other components and can trigger the CEL for different reasons.

So your best bet will be to diagnose with a scan tool. A failing component will always store a fault code which will appear on the scanner during diagnosis. All you need is to understand these fault codes; specific codes point to a failing component.

Thus, an increase in fuel consumption. So if you’re suddenly using more fuel than usual, the VVT solenoid may be worn. And a quick way to diagnose a bad solenoid is to look for oil in its connector.

Another essential function of the VVT solenoid is to supply more power when it detects your vehicle is working harder than usual or has reached a higher RPM. For example, when the VVT detects your car’s load has increased or you’re going uphill, the VVT automatically activates, providing more power for your vehicle.

If, however, the VVT solenoid is defective or ocv is unable to produce enough oil pressure, your car will idle roughly since it can’t generate the power needed to do such a job. While a faulty VVT can result in rough idling, several other components can also be responsible.

The VVT tends to save fuel and increase engine power depending on the position of the camshaft. However, if the VVT oil control valve is failing, engine performance may reduce since the VVT solenoid may not be able to generate enough power needed by your engine.

When this happens, you will find it difficult to maintain high speeds, drive uphill, and even experience hard acceleration.

A failing VVT solenoid restricts the VVT actuator from getting the oil pressure it needs. As such, you will hear a rattling or ticking noise from the engine.

So for those asking,  can a VVT solenoid cause low oil pressure? Yes! The camshaft position is adjusted by oil flowing through the oil control valve. So if the VVT solenoid is faulty, oil flow will be reduced, ultimately reducing oil pressure.

How to test VVT solenoid connector

While oil in the VVT solenoid connector points to a faulty solenoid, it’s good that one is sure the connector is also in good shape. Because you might end up changing the solenoid only to be faced again with a bad connector, which means more time.

To avoid this, test the connector to see if they’re still working. If they are not, you could replace them when replacing the solenoids. So here is how to test VVT solenoid connectors. Connect a test light or a voltmeter to the connectors attached to the solenoid; it should supply power. If it does not provide power, your connectors may be failing.

How do you fix oil in VVT solenoid connector?

Clean or replace, depending on the condition of your VVT solenoid. If it’s dirty, you can clean it, but if it’s leaky, you may need to replace it. So for those asking, can you clean VVT solenoid? Yes, you can. Just ensure you use the right cleaner, as certain cleaners can destroy the rubber parts of the solenoid.

So, What to use to clean the VVT solenoid? Your best bet will be a throttle body or mass air flow cleaner, as they can remove gunk or grime without destroying the rubber parts of the VVT solenoid. If, however, the VVT solenoid is broken or leaky, you should replace it with one suitable for your car.

Here, you need a new solenoid. So how much is a VVT solenoid? A new VVT solenoid can be between $203 and $224, depending on your car model. And if you’re replacing it yourself, you only need to buy the parts. If you go to a mechanic, replacement costs can climb up to $317 and $368, with labor costs estimated at around $114–$144.

While swapping with a new VVT solenoid, do well to clean the connectors as they shouldn’t have oil else; they will lose connection. As stated above, be careful of what you use in cleaning it. Certain cleaners like the brake or carb cleaner should never be used on plastic electrical connectors as they could damage the seals and plastic in the connector.

What to use to clean a VVT solenoid connector? A throttle body or mass air flow cleaner should suffice, as they can remove gunk or grime without melting plastic.  After the replacement and cleaning, do well to change your oil since old or dirty oil is the primary cause of a defective VVT solenoid.

Note that the codes thrown during diagnosis may not erase immediately after changing the solenoid. According to some vehicle manuals, it may take up to three driving cycles before the fault code disappears.

Oil in VVT solenoid connector indicates you have a defective VVT solenoid. So to fix the issue, you should clean or replace the VVT solenoid. However, since old or dirty oil is the main culprit of a failing VVT solenoid, you will need to change it when cleaning or to replace the solenoid. Else, you will have the same issue again, which will invariably cause many car problems for you.