Before landing on the debate of R134 vs R12 you should know that both R134a and R12 are AC refrigerants types used in refrigeration and air conditioning systems. Even though their common major function is to cool the system, they have many differences. Most of all the differences gravitate to longevity, functionality, and safety.

Let’s take you through the advantages, disadvantages, and differences of these two refrigerants – a detailed comparison including R12 vs R134a performance. 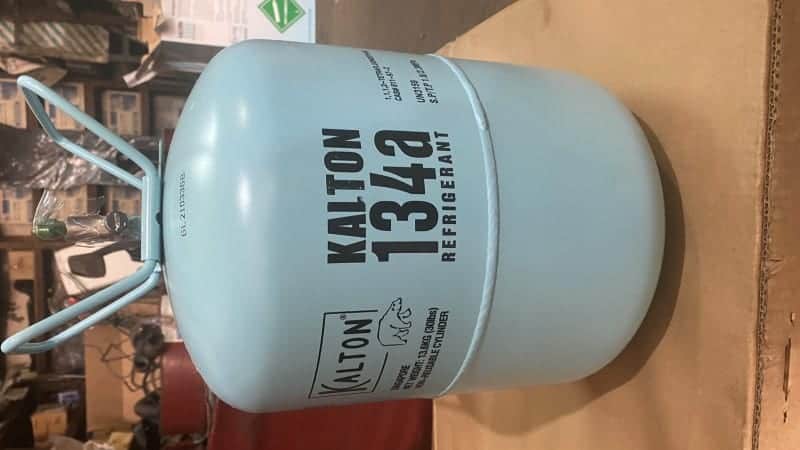 R134a is otherwise called 1,1,1,2 – Tetrafluoroethane, Florasol 134a, Freon 134a, Norflurane (INN) or HFC 134a. It is a haloalkane and hydrofluorocarbon (HFC) refrigerant that has thermodynamic properties, potential global warming for one hundred years, and insignificant ozone depletion. Using R134a requires that Polyolester (POE) lubricant must be used in the compressor.

Additionally, R134a was introduced as a replacement for R22 and R12 in high and medium-temperature refrigeration systems like domestic and commercial chillers. Also, R134a cylinders are light-blue in color.

Existing technology: R134a has been in use in the refrigeration industry for very many years, and there’s so much information about the safe use of the product. Besides, its technology has been tested and trusted.

Environmental Impact: When R134a escapes into the atmosphere, it contributes to global warming. It’s among the greenhouse gases and will keep adding the current problem of heat not leaving the earth’s atmosphere.

Safety: R134a is safe to use as it’s non-flammable and can’t explode. Therefore, it’s most suitable for both commercial and domestic environments.

Compatible with multiple applications: The major reason for the introduction of R134a was to replace R12, so it functions perfectly in the same range of applications like rotary, screw, and centrifugal compressors for air conditioning and refrigeration. It is also used in automotive car conditioning and the plastic industry.

Energy usage: R134a is less efficient in cooling compared to R12. When the temperature is reduced to-7°C or below, the plant’s ability to cool the airdrops significantly. This drop can affect energy consumption since the plant will operate for a longer period or a larger plant will have to be installed.

Concentration level: The R134a vapor dilutes the oxygen concentration in the air to a low level, thereby causing harm.

Skin contact: If the R134a (liquid) comes in contact with your skin, it could cause a burn. If it splashes inside the eye, it could lead to a serious eye problem. Make sure to wear safety gloves, goggles, and shoes when there’s a possibility of exposure to the chemical (R134a).

Inhalation of vapor: Inhaling a large amount of R134a vapor can lead to drowsiness, temporary nervous system depression, and lethargy. In more serious, it could result in cardiac irregularities or death.

R12 is otherwise called dichlorodifluoromethane is a colorless gas (chlorofluorocarbon halomethane (CPC) that is used as an aerosol spray propellant and a refrigerant, and is soluble in organic solvents. Further production of R12 was banned in some developed countries by the Montreal Protocol because of its harsh effect on the ozone layer. It is usually sold under the brand name, Freon 12.

However, R12 refrigerants are still used as fire retardants in aircraft and submarines. Also, they are mostly used in refrigeration and automotive air conditioning systems. Its cylinders are colored white. Most vehicles manufactured before 1993 have the R12 A/C system. Unfortunately, the R12 refrigerant doesn’t always blow cold air.

Stability: RR12 doesn’t disintegrate even under extreme operating conditions. However, if it is taken close to a fire flame or any electrical heating element, it disintegrates into toxic products. Here’s some important advice – Whenever you notice your R12 refrigerant is leaking, turn off all flames and open the doors so it can escape to the open atmosphere.

Best for varieties of operating conditions: Its boiling point is -21.6° Celsius. This implies that the discharge pressure of the compressor should be moderate so it can produce the refrigerant’s condensation in the condenser at the atmospheric temperature. R12 is used in several applications like low temperature, medium temperature, and high-temperature applications. Also, it can be used with all types of compressors.

Miscibility with oil: R12 can be mixed with the compressor oil no matter the operating condition. This allows the refrigerant in the condenser to be void of oil particles.

R12 is CFC: Even though R12 is one of the most commonly used refrigerants, it is CFC. This means that it has a high potential of causing depletion to the ozone layer. So, instead of using R12, other better options include – R401b, R134a, R401a, etc.

What is the difference between R134a and R12?

R134a and R12 are both refrigerants used in vehicle air conditioning systems. Before R12 was replaced with R134a in 1995, it was mostly used in trucks and cars. With the knowledge of the differences, you’ll be able to draw a comparison between R12 vs R134a efficiency.

Below are the major differences between R134a and R12:

The chemical composition of R12 and R134a differ. R134a is called tetrafluoroethane (HFC). Its chemical symbol is CH2FCF3. It is made up of carbon, hydrogen, and fluorine.

R12, on the other hand, is called chlorofluorocarbon (CFC). Its chemical symbol is CCl2F2. The symbol implies that R12 is a composite of carbon, chlorine, and fluorine.

The ozone depletion potential of a chemical is a factor that shows the level of degradation it’ll cause to the ozone layer that surrounds and secures the earth from harmful radiation. Its highest value is 1.

R134a has an ozone depletion potential of 0, implying that it has a slight effect on the ozone layer.

R12, on the other hand, has an ozone depletion potential of 1, implying that it can damage the ozone layer.

The compressors used by refrigeration plants to compress gas require oil to help lubricate its moving parts. Most importantly, the oil used in the plant must always be compatible with the refrigerant used.

The best oil that runs well with R134a is PAG oil or Polyalkylene Glycol. For R12, it’s mineral oil. Interestingly, there’s one oil type that works perfectly with both types of refrigerants. The name of the oil is Polyol Ester (POE).

To a large extent, the choice is up to you. However, R134a is better than R12. Besides, R134a refrigerant was manufactured after R12 was banned to help reduce the harshness of the old chemical (R12) on the ozone layer.

Instead of using R12, it’s preferable to use R134a because it is very easy to find in the market, it’s sold at an affordable price, and is environmentally friendly. Nevertheless, if your application is configured only for R12, then you can use it or consider replacing the application’s engine.

There’s no problem with using R134a in a home air conditioning system because it is a hydrofluorocarbon that doesn’t cause environmental harm. Since 2010, all home AC systems manufactured use a refrigerant like R134a that has zero ozone depletion potential (ODP). However, take note that R134a refrigerants are manufactured specifically for automotive air conditioners.

In addition, R134a refrigerants are not only used in auto air conditioners, they can be used in freezers, aerosol cans, and refrigerators. Also, if you want to know what happens if you put R134a in an R12 system, you should first confirm if the R12 system can be replaced or if the refrigerants can be mixed. If you still find it difficult to use R134a in a home AC system, you can check out a comparison of R12 vs R134a fittings to know the refrigerant that best fits the AC system.

The major reason for the replacement of R12 with R134a was to curb future greenhouse effects. There’s no doubt that R12 refrigerant is one of the first compounds manufactured for the air conditioning and refrigeration world, but it had to be banned.

It has already been clearly stated that R12 is a chemical that damages the earth’s ozone layer and shouldn’t be released into the environment no matter the circumstance. Moreso, it had been banned. Therefore, the R12 refrigerant is illegal, and emitting it is illegal. Plus, not releasing the chemical into the air is morally justifiable.

Q: What refrigerant will replace R134a?

The best replacement for R134a is R1234yf, while R12 refrigerant replacement was R134a. The first vehicle that used the R1234yf refrigerant was the 2013 Cadillac XTS. R1234yf is more environmentally friendly and has a global warming potential of 4. In most cases, the systems used have varied components, designs, and service ports.

As for R134a and R1234yf, there’s no room for conversion. You either get a system that will function well with R1234yf or get any other type. The reason is that the vehicles, for instance, manufactured currently configure the engine for R1234yf refrigerant, making no provision for replacement. In a comparison between R12 vs R134a vs R1234yf, R1234yf will pass as the best refrigerant.

Usually, mechanics charge around $200 for conversion. The cost of recharging the air conditioner is between $150 to $500. You should keep in mind that recharging your air conditioner improperly could result in more serious damage. Swapping the components isn’t a herculean task, but recharging the AC is a challenge. Ensure you contact a professional mechanic to do the work for you so you don’t end up incurring more costs for yourself.

However, you can convert R12 to R134a by yourself, save money and keep all the tools purchased.

R134a and R12 are among the most popular types of refrigerants. R12 is highly destructive to the earth’s ozone layer. Inasmuch as R134a has a global warming potential that’s over 1000 times more threatening than carbon dioxide, it’s better than R12.

We, the Rxmechanic team, have presented a well-detailed comparison of R134a vs. R12. These two refrigerants are the older types and are not used in newer refrigeration and air conditioning systems. However, they’re still used in older plants, systems, and the automotive industry.