Like other machines, vehicles can be “grounded” perpetually when you leave their engines inactive for a long time. This is because the regular fuel that powers your vehicle is subject to shelf life of around 3 – 6 months. After that, it can become harmful to the engine as storing fuel for longer than its shelf life may cause it going off and gummed up.

Hence, the need to identify a suitable fuel stabilizer and engine cleaner that can keep your fuel fresh for a long time and clean the engine and the entire fuel system at the same time. Seafoam and Stabil are the two premium-grade fuel stabilizers that can prolong the engine life by preventing residue buildup, varnish, gum, and the like.

But they differ in strengths and uses that put the car owners in a fix on which one to go for. That’s where Seafoam Vs. Stabil seems to be in a constant contest when the issue of quality fuel stabilizers comes to mind.

This argumentative review examines the two brands separately, especially their pros and cons, as well as their core differences. This will enable you to make the best buying decision eventually. 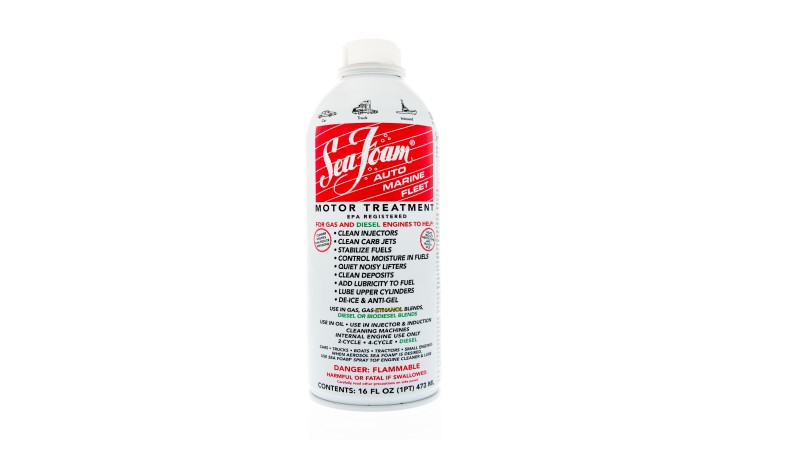 Seafoam fuel stabilizer is one of the most popular fuel stabilizers for vehicle owners. However, the product has a wide range of use in boats, lawnmowers, etc. Seafoam was introduced by Fred Fandrei in 1942, after generating the idea around the 1930s.

The founder of the brand was a professional salesman in the petroleum industry, which gave him a perfect background. Fandrei manufactured Seafoam to enable vehicle owners to combat contaminants that hinder the proper functioning of engines and other problems arising from stale fuel.

Therefore, Seafoam is not only equipped with the ability to serve as a fuel stabilizer, but it also cleans and retains a vehicle’s engine power for performance and efficiency.

If you’re contemplating, “How does seafoam stabilize gas?” Applying this product to your car’s fuel tank automatically resists fuel evaporation and prevents varnish or gum formation. It also preserves the vehicle’s ignition vapors and cleans the injector and carburetor perfectly.

Seafoam comes with a wide range of everyday use in various fuel types like gasoline, diesel, or ethanol gas blend. It offers several advantages across various areas of use. However, the brand also has a few drawbacks that you must consider when making a final decision on using the product. 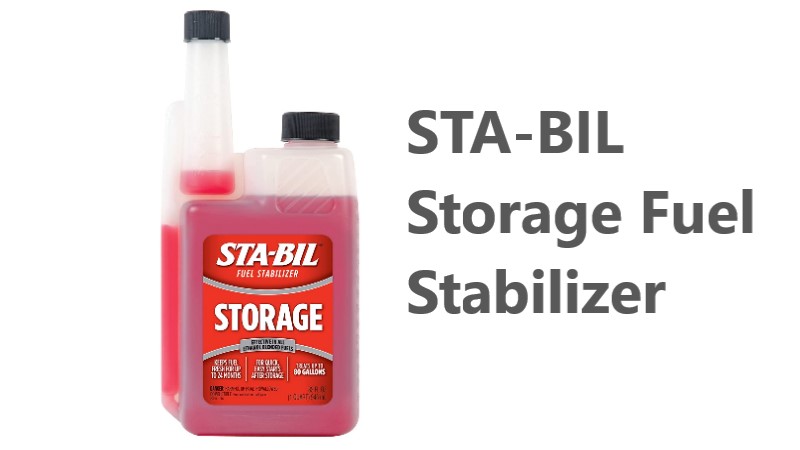 Stabil ranks as America’s No.1 fuel stabilizer. It is said to be the most trusted and reliable fuel additive and fuel system treatment. The brand has waxed strong since it was founded in 1932 by Armin Hirsch. However, it was later bought by Gold Eagle in 1986.

The fuel stabilizer is designed with the capacity to sustain fuel in a gas tank and prevent it from going bad for up to 2 years. It negates the 6 months shelf life limitation of gasoline by keeping moisture contaminants at bay.

Seafoam works across several areas in a vehicle, including cleaning the injector and carburetor, as well as combating corrosion and any form of contaminants that result in engine problems – going off residue buildup, and other issues. Stabil has a couple of products under its umbrella, including the Stabil Storage and Stabil 360 Protection.

The Stabil Storage is designed to remove water from fuel in order to prevent corrosion within the gas tank and the engine. Its mild detergent content enables it to thoroughly clean injectors and carburetors in order to keep them “sharp” for top-notch performance.

Besides its application in vehicle engines, Stabil works perfectly in boats, motorcycles, lawnmowers, and outdoor equipment engines. In fact, Stabil is known for ensuring easy engine start regardless of keeping fuel beyond its shelf life in the gas tank. It prevents evaporation, varnish or gum build-up, and general fuel deterioration.

Although Seafoam and Stabil Storage have some things in common such as the expected fuel stabilization period (2 years), both products also have some slight differences. A thorough examination of the two brands reveals the following discrepancies:

Seafoam and Stabil Storage are designed to keep vehicle fuel in a perfect state for up to 2 years. However, Seafoam is twice as expensive as Stabil Storage. Meanwhile, Stabil Storage is two and half times more potent than Seafoam.

Therefore, considering the overall performance, Seafoam and Stabil Storage have the same preservation period of 2 years. Nevertheless, Stabil Storage is cheaper and more potent irrespective of delivering the same level of result overall.

So, it is not out of place to say that Stabil Storage is better than Seafoam. If you are contemplating, “Which is better Sta-bil or Seafoam?” This analysis is obviously a key factor to consider.

Q: Does Sea Foam act as a fuel stabilizer?

Of course, Seafoam acts as a fuel stabilizer. The brand is designed with the capacity to stabilize your car’s stored fuel for up to 24 months (2 years). Seafoam helps to prevent fuel evaporation, as well as the formation of varnish and gum in a vehicle’s fuel system.

It also preserves the vehicle’s ignition vapors and offers maximum protection against contaminants that hinder the proper running of the engine. The injector cleaner has zero-tolerance for contaminants, and it works actively in all vehicle types.

Q: Is stabil and Sea Foam the same thing?

Not necessarily! Although Stabil and Seafoam have the same basic ingredients as fuel stabilizers, both products have some slight differences. For instance, Seafoam has a wide range of use across gas and diesel fuels. Conversely, Stabil use does not extend to diesel fuel.

Q: What is better than Sta-bil?

Stabil ranks as America’s No.1 fuel stabilizer and fuel system treatment. Although Seafoam and other brands are competitive counterparts, Stabil is relatively cheaper and sustains fuel storage for up to 2 years like Seafoam.

Considering the fuel ratio of 1 ounce to 2.5 gallons, Stabil is relatively more economical than Seafoam by two and a half times. However, if you’re contemplating Seafoam vs. stabil 360, Seafoam stabilizes fuel twice (24 months) more than Stabil 360 (12 months).

No! Seafoam is a petroleum-based fuel stabilizer and injector/carburetor cleaner. It is designed with ingredients that are suitable for your engine. It has the advantage of cleaning your car’s engine chamber and intake valves.

Therefore, Seafoam will rather improve your engine by combating contaminants that cause engine problems instead of damaging the component.

In fact, Seafoam will improve your car’s overall performance and efficiency. Star tron vs. Stabil Vs. Seafoam is an amazing fuel stabilizer you can trust among competitors. Nevertheless, they have their discrepancies.

Q: Should I put Sea Foam in my gas tank?

Of course, Seafoam is applied in the gas tank. It is designed to stabilize the fuel by resisting fuel evaporation and preventing sludge or varnish build-up. The stabilizer also cleans the injector and carburetor to enable easy engine start.

The product comes with a user’s application guide. Ensure to comply with all the instructions provided by the manufacturer in order to enjoy the full benefits.

Q: Can you use too much Sea Foam?

Too much Seafoam will do more harm than good. It will eventually clog your car’s vacuum system. This can hinder your car’s performance and efficiency if not unclogged as soon as possible.

Q: Which fuel stabilizer is best?

Stabil Storage is the best fuel stabilizer. It ranks as America’s No.1 fuel stabilizer among other competitive brands. The product is relatively cheaper than most of its counterparts and it performs almost at the same level as virtually all other fuel stabilizers.

However, other amazing fuel stabilizers include Lucas oil, Seafoam, Star Tron, Yamaha, etc. If you need a quality fuel stabilizer with a relatively small budget, ensure to check out the prices of these brands. Meanwhile, Stabil gas treatment vs. Seafoam is worthy competition.

Q: How often should you use Sea Foam?

The brand manufacturer and automotive experts advise that you use Seafoam anywhere around 2,000 – 5,000 miles. You may also want to stick to somewhere around every 3 months or dinner to add Seafoam to your gas tank.

Ensure to follow the fuel ratio of 1 ounce of Seafoam to 1 gallon of fuel to get the best out of the fuel stabilizer. Meanwhile, if you’re not sure of recalling the last date of applying for Seafoam, kindly set up a schedule on your calendar or mobile phone.

Of course, Stabil is designed to remove water from the gas tank in order to prevent corrosion. It ensures resistance against fuel evaporation, varnish, and gum build-up, as well as injector and carburetor clean-up.

Stabil will boost your car’s overall performance and efficiency when you use it properly according to the manufacturer’s instructions. If you’re looking for a durable fuel stabilizer to keep your car’s engine safe from damage, in the long run, ensure to use Stabil.

Undoubtedly, the importance of fuel stabilizers cannot be overemphasized. However, using the most suitable fuel stabilizer brand for your car’s engine is extremely vital. Seafoam Vs. Stabil is a worthy contemplation.

Nevertheless, Stabil stands as the overall best among several fuel stabilizer brands. Truth is, Stabil is relatively cheaper and more economical since 1 ounce of Stabil can sustain 2.5 gallons of fuel as against 1 ounce of Seafoam to 1 gallon of fuel.

Also, Seafoam costs twice the amount of Stabil. So, ensure to consider your budget and every factor that differentiates these two before making a buying decision.