The car industry has seen a lot of revolution in recent times. Car manufacturers keep adding new safety features and technology to minimize accidents and theft technology to prevent thefts. Modern cars have introduced theft technology to work in synergy with the car computer to notify the driver when there’s an attempt to break into your car.

These features and technologies do not last forever. They can malfunction or fail over time and project warning signs on the dashboard. For many drivers with the theft technology in their cars, the service theft deterrent system is a common issue that may pop up from time to time. 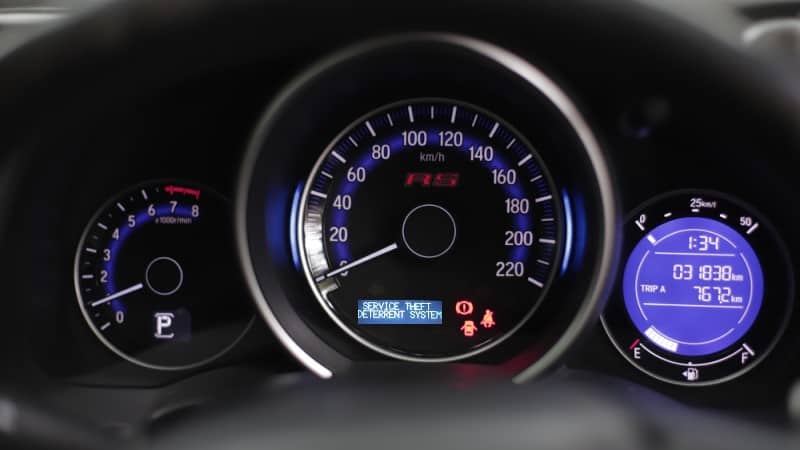 What is a service theft deterrent system?

As the name implies, the theft deterrent system is a technology that prevents thieves from breaking into your baby ride or notifying you when there’s a break-in attempt. This system works in harmony with internal and external car sensors to detect a break-in attempt.

If this technology detects a break-in attempt or when the vehicle is moved, it’ll immobilize your car engine and raise a beeping alarm to prevent the theft from driving the car away. In most cases, the alarm will continue until you turn it off with the original key fob.

Why is my car saying service theft deterrent system?

Everyone wants their baby’s security intact. So, the service theft deterrent system message on the dashboard will help you track and fix the problem on time. Driving your baby ride without issues will be ideal in a perfect world. Unfortunately, there’s nothing like a perfect world. Most system malfunctions are inevitable.

The common reason the anti-theft warning message appears on the driver’s infotainment center is a dead battery. If the car battery discharges, it may prompt the car to project the warning message on the dashboard.

Therefore, check the battery once the warning message appears on the dashboard. Another probable cause is a lousy key fob. This mostly happens after replacing your key fobs. So, keep your key fob if it is old and functioning correctly. It can be a lifesaver when you see a service theft deterrent system on Chevy Impala or any car model and the car is not starting.

Other reasons your car is saying service theft deterrent system on Chevy Malibu, Impala, Cruze, Silverado, or any car models include

Read Also: Fuel Induction Service: All that you Need to Know

How do I fix my service theft deterrent system?

If the anti-theft light pops up on the dashboard, you need to track the root cause and fix it. The following paragraphs will explain how to turn off the service theft deterrent system in three simplified methods. Pay rapt attention to the following guides.

Method 1: Check the key fob and the lock cylinder

There are chances you have a dead-key fob battery. There’s no doubt that your car will not sense a key fob with a dead battery. By this, the car may think an intruder is trying to unlock the car with a different key. It can also happen if the key fob battery is not installed correctly.

If someone tried to break in or your vehicle is damaged due to any reason, it may cause the system to leave a security warning message on the dashboard. If this is the case, examine the door lock cylinder and look underneath the door handle. Some car thefts try to open car doors with screwdriver tricks.

This may look stupid, but you can’t overlook it. Some keys can only unlock the doors but can’t start your baby ride because they do not have the chip to communicate with your car to start it. So, ensure you’re starting the car with the correct key.

Method 2: Switch on the ignition

If the service theft deterrent system is displaying on your dashboard, it means the anti-theft system has been triggered. And this will prevent the car engine from starting. However, don’t panic if you’re in this situation. The next few steps will explain how to reset a service theft deterrent system error message on the driver’s infotainment center.

Step 1: See if the anti-theft light is on the dash

Most newer car models will project a warning light on the dashboard once it triggers the anti-theft security system. This warning light looks like a combination of a car and a lock.

Step 2: Switch the ignition to the “ON” position

Insert your key into the ignition and switch it to the ON or ACC position. Do not crank the engine. This will enable the car to re-read the car key again. You need to invest your time here. You need to leave the ignition on for 10 to 15 minutes.

Step 3: Switch off the ignition

If the warning light stops blinking or starts blinking if it wasn’t blinking before, switch off the ignition. Remove the car key and allow the car to sit for a few minutes. This will reset the service theft deterrent system.

Step 4: Insert the key and start the car.

Insert the car key and get your car running. If the car engine fails to come up, check and ensure the car battery is fully charged. A dead car battery can also be a culprit. If the car is still not running by now, repeat steps 2 and 3 above.

Method 3: Open the car door with a physical key

Step 1: Insert the physical key into the driver’s door

Step 2: Unlock the door with the key

Insert the key into the driver’s door handle and hold it for at least 45 seconds. By doing this, the car security system will understand that you have the right key and bypass the alarm system. However, some cars will only recognize the car by turning it back and forth. So, try both methods and see which works for your car.

Step 3: Turn on the vehicle.

Remove the car key from the lock cylinder while leaving it unlocked. Try starting the car. Your engine should be running now. But if none of these solve the problem, contact an experienced service technician to track the root cause and fix the problem.

Q: How do you reset a Chevy theft deterrent?

You can reset the service theft deterrent system in Chevy cars by following the simplified steps below. First, insert the car key into the ignition hole and turn it to the ON position. Do not try to start the car. Leave the key inside the ignition hole until the flashing warning light stops.

This will likely take around 10 to 15 minutes. Once the light goes off, return the key to the off position before trying to start the vehicle. By now, the Chevy theft deterrent system is fully reset, and the vehicle should start.

The anti-theft, also known as security systems, works with external and interior car sensors. A break in attempt, movement, or an impact can trigger the system to pop up on the dashboard. It only triggers the alarm system to alert the car owner or driver.

However, other parameters can cause the system to malfunction and activates the theft deterrent system. These include dead key fob battery, dead car battery, damaged car lock, and defective immobilizer.

Q: How do I turn off anti-theft without a key fob?

If you own a car with an anti-theft system, you’ll agree that the easiest way to shut it off is to press the lock or unlock buttons on the car key fob. But what if you don’t have the key fob or the battery is dead? If you’re in this situation, follow the below steps.

Manufacturers use different technologies in building their vehicles. So, don’t always expect what works for vehicle A to work for vehicle B. The owner’s booklet should tell you what to do.

Get inside the car and lock the windows with the power lock button on the driver’s side window.

Turn on the ignition.

Insert the physical car key into the ignition hole and turn it to the ON position. Leave the key on this position for some minutes before turning it off.

Pull out the alarm fuse

Open the hood, locate and pull out the alarm fuse. Removing the fuse should disconnect the electric flow to the alarm and also shut off the anti-theft alarm.

Yes. Once an anti-theft warning message appears on the dashboard, the vehicle will not start until you fix the root cause. For example, if the message appeared due to malfunctioning, you’d need to reset the theft detention system before starting the vehicle.

Q: Is there a fuse for an anti-theft system?

Cars have an alarm fuse that controls the security sounds. The alarm fuse should be in good health for your car to start. Without it, the engine won’t come up. The fuse is located in one of your vehicle fuse boxes. You can trace the exact location with your owner’s manual or by reading the labels on the fuse box covers.

Q: How do I reset my car alarm after changing the battery?

If your security light comes on after a battery change, you can try to reset the alarm to get rid of the service theft deterrent system warning message. To do this, ensure the battery is fully charged and provides enough juice. After installing the battery, shut the hood properly.

Next, lock and unlock the car doors with the key fob. After that, insert the car keys into the ignition hole and leave it there for about 10 to 15 minutes. Finally, monitor the warning light on the dashboard and see if it stays lit or turns off. If the light goes off, you have fully reset the system, and the vehicle should start now.

Usually, the alarm system needs a reset after changing the car battery. But the car should automatically reset the alarm. Some vehicles may require you to press and hold a button on the alarm box, while others will require you to follow specific instructions.

While service theft deterrent systems on Astra and other car models are designed to activate when there’s a break-in attempt, the system often malfunctions and activates without any break-in attempt. Once the system activates on most vehicles, the engine will not come up, leaving you frustrated.

I have been in such a situation, and I know how it feels. So we don’t want you to get frustrated, and that’s why we explained what a service theft deterrent system is, the probable causes, and how to reset it and start your car.

This is a simplified guide that even amateur DIYers can follow and achieve a great result. So follow the guide religiously and get your car on the road.