A wrench is a tool that must feature in your mechanic’s toolbox. It plays a crucial role in providing grip and torque application, such as in turning bolts and nuts or holding them in place. There are several types of wrenches that you may encounter, each with its distinctive features. In this discussion, our main subject is standard vs. metric wrenches.

At first sight, the two tools appear similar. However, the variation comes when you look at their measurement values. If you use the standard wrench, the metric wrench may seem confusing and vice versa.

We will look at each of the wrenches to show you the contrasting point to aid you in picking the right tool.

What is a Standard Wrench? 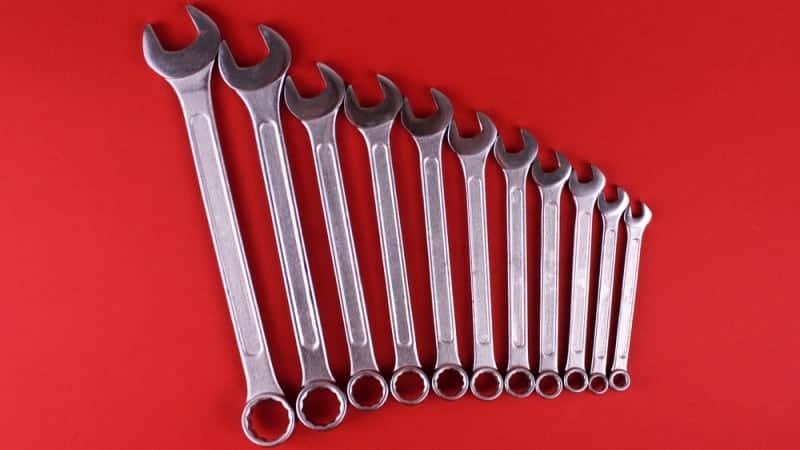 For your information, this measurement system is the precursor to the United States’ customary system, where you find units like inches, feet, miles, and yards.

The other defining feature of the standard wrench is its units. You find the socket’s dimensions reflected in inches and factors infractions. The standard wrench sizes range from ¼-1-inch. In total, there are fourteen sizes of this tool.

In short, the standard wrench has its measurements in inches, and its target is the US market.

What is a Metric Wrench? 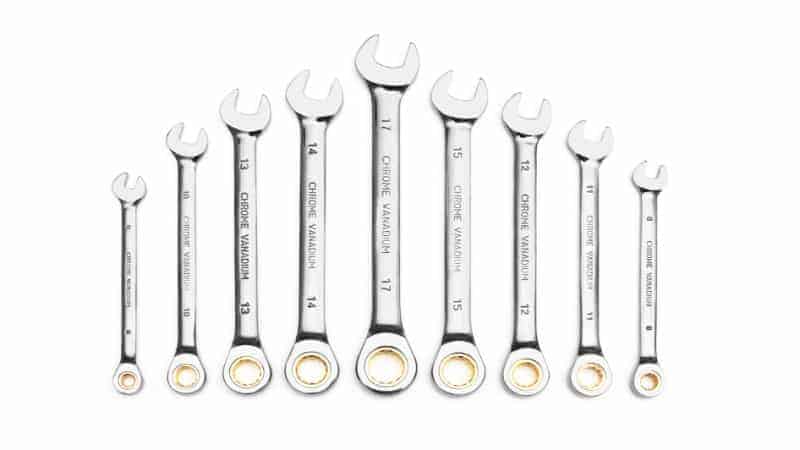 On the other side, we look at the metric wrench. A defining factor of the metric wrench is its size, which is in millimeters and whole numbers. It follows the International System of Units, also known as SI. As a more common measuring device, you find it in most parts of the world due to the measuring system it uses.

The sizes denote the socket size and range from 4 to 18-millimeters. They are easy to use as the dimensions are in whole numbers, as earlier hinted. Many countries in the world use the metric measuring system. Exceptions include the USA, Myanmar, and Liberia.

Standard vs. Metric: What are the Differences?

Standard and metric wrenches appear to be the same, and a newbie may have a hard time telling them apart, especially if packaged. Let us look at various aspects of the wrenches that will help you differentiate them.

The first facet we touch on in the standard vs. metric wrench differences discussion is the measurements. As previously mentioned, these wrenches use varying systems.

The standard wrench uses the imperial system, and its units are in inches and incorporate fractions. On the other hand, the metric wrench uses the international system of units, and the measurements are in millimeters. Also, the numbers are whole, making interpretation an effortless process.

Another essential factor to know about the wrenches under discussion is their price. When shopping for one, you will realize that metric wrenches are pricier than standard wrenches. An explanation for the cost may be that they come as a whole package, with several sizes.

The other explanation for the cost is the versatile use of this wrench. The standard wrench is relatively cheap, as you can get one of a specific size.

When looking at the application, we focus on the countries you can use the wrenches. Already mentioned that the standard wrench is for the North American market, which uses the imperial measurement system. And the metric wrench serves all countries that use the international system of units.

As such, you are likely to find the standard wrench in the United States, while the metric one is available worldwide.

As for tasks accomplished by the wrenches, there is a wide range of them and this is where the popularity of the wrenches lies. Given the various sizes and shapes of the wrenches, a can find them crucial for a host of tasks that include:

of pipes, nuts and bolts pipe fittings, and many more.

Imagine having a .0standard wrench, but you are working on a metric bolt or vice versa! This brings us to the question; can you use standard and metric wrenches interchangeably? No, it is not possible due to the varying sizes of the sockets and bolts.

However, if you know how to substitute them, the better, as you will hack the situation. A tool that you can rely on to substitute the wrenches is a standard vs. metric chart. For versatile wrench uses, the chart shows you metric values in millimeters and the alternating imperial values in inches.

You can refer to the conversion chart to see the proper substitute to pick for your task.

The socket is the part that you attach to a socket wrench to turn a bolt or a nut. When looking at standard vs. metric sockets, you will realize that they are specific to the measuring system. While at the hardware store looking for a befitting socket wrench, ensure you have the correct measurements.

Standard socket wrenches will have their values in inches, while the metric type will be in millimeters. To avoid picking the wrong tool, be sure of the measurements and the socket type you need.

What do you know about standard vs. metric tools? This is an area that you should know if you are a hands-on person or operating a workshop. Standard tools use the imperial or SAE measuring system, commonly used in the USA. Metric tools rely on the metric measurement system.

The difference is on the units, where standard tools will use inches, feet, miles, and yards. The metric system uses millimeters, centimeters, meters, and kilometers for expression.

Standard vs. Metric Pros and Cons

Still, on the standard vs. metric discussion, we have to look at the tools’ respective advantages and disadvantages to get a hint of how they work. Stick on as we look at the pros and cons of standard and metric wrenches.

Standard wrenches are readily available in the North American market, which uses the imperial system. They come in handy in several areas, such as the automobile industry, carpentry, and other industrial works.

Also, they come in various sizes, starting from ¼ to 1-inch, a total of 14 sizes. The other advantage of this type of wrench is that you can easily get an individual size, making it more affordable, as you do not have to go for a set.

The main disadvantage of the standard wrench is interpreting the measurements as they are infractions. It may be problematic to read for those new to the imperial system. The other downside is that you can only use it in the USA, as most countries use the international metric system.

Metric wrenches are available all-round the world, as they use the metric measurement system. They use millimeters as the base unit, and the values are in whole numbers; hence, easy to read, even for beginners.

Additionally, metric wrenches come in a set that includes all sizes. As such, you can turn bolts and screws of various sizes.

You cannot buy a single metric wrench as it comes as a set, making this type expensive.

The other con of metric wrenches is that you cannot use them in the USA and other countries that use the imperial system.

Q: Does The US Use Metric Or Standard?

Q: Is Metric Or Standard Better?

If looking for a suitable pick between a metric and standard wrench, you must consider several factors. The most important attribute to consider is the country of use. If you are in North America, you should go for the standard wrench, which uses imperial measurements.

The metric wrench is suitable for other markets around the world as it uses the international metric system. Moreover, the metric wrench is highly adaptable as it comes as a complete set. Considering the cost, the standard tool is the better, as you can buy a single unit of the needed size.

Q: Do Cars Use Metric Or Standard?

You have to be keen on the tools that your vehicle uses to avoid any confusion. Not to miss, cars in the US and a handful of other territories use standard tools that comply with the imperial or SAE measuring system. In the rest of the world, cars use the metric system; thus, the go-to tools are the metric type.

Q: What Metric Sizes Are The Same As Standard?

Getting a metric wrench that has the exact dimensions as a standard wrench is pretty hard, but you can hack it with the aid of a conversion chart. On the metric to standard conversion chart, you will find almost congruent values.

For instance, a 5/16 inch wrench is equal to 8-millimeters, and a 5/8 inch is 16-millimeters. Standard tools use inches as their base unit, while metric tools rely on millimeters.

Metric and SAE bolts and nuts vary in size, and they use wrenches of similar size to turn or hold them. If you have SAE bolts or nuts, it is advisable to use standard wrenches. The same applies if you have metric bolts, where you should use metric wrenches.

In the situation where you have metric bolts and standard wrenches, can it work? Yes, it can work, though you have to be keen on the wrench, ensuring that it is of the correct size. A conversion chart or online conversion tools can help you get the valid value of the wrenches to use interchangeably.

Q; What Are The Most Common Metric Wrench Sizes?

If you own a workshop or an auto repair store, there are wrench sizes that you should have at all times, as they can handle several tasks. They are the ¼, 3/8, and ½ inches. You may also need the ¾ and 1-inch wrenches for heavy-duty jobs. Converted to metric values, they are7, 10 13, and 26-millimeter wrenches.

As a mechanic, there are utilities you cannot afford to miss, such as the wrench. It is a turning tool, which you use to loosen, turn and hold bolts and nuts. The wrenches use different measuring systems, as we can see in the imperial vs. metric wrenches discussion.

Here, we have the standard wrench, which uses the imperial system, and the metric wrench that uses the international measurement system. In this article, we take an in-depth look at each of the tools to understand their differences. Always be keen on the wrench’s measurement values to avoid mishaps and frustrations when at work.

link to Head Gasket Leak - Everything You Need to Know

Cylinder head gasket leaks are not too common, but it’s an engine problem most car owners give much concern. The Head gasket plays an essential role in ensuring there’s no leak within the...

Cars are designed to run perfectly with the proper functioning of various components. Some of these components are powered by fluids which keep them lubricated to deliver their best performance on...