However, the material has a more extended use than the few listed above. Styrofoam and gasoline have been found to be a powerful mix that creates a highly flammable substance. But the outcome can be harmful if not properly used.

Gasoline has a powerful impact on styrofoam when both of these components come in contact. This article unravels what styrofoam is and the reactions it creates when it comes in contact with gasoline and a few other substances like acetone, alcohol, etc. 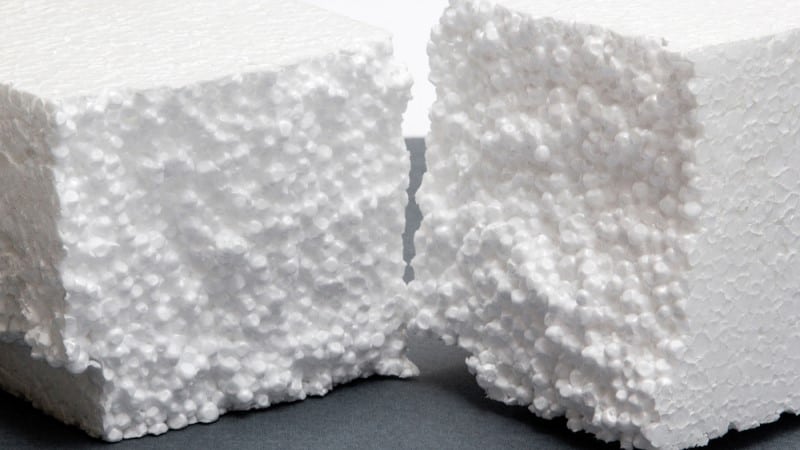 Styrofoam is a kind of plastic manufactured from expanded polystyrene (a petroleum-based substance). The main component of styrofoam is styrene. This material is refined to form polystyrene through a process known as polymerization.

Then, an agent (hydrofluorocarbon) is added to the polystyrene. After that, the combo is extruded and allowed to go through an expansion process under pressure in order to form a foam board.

The styrofoam produced from this chemical process can be used for various purposes, including food containers, insulation, and packaging for breakable items like cups, plates, eggs, etc. Unfortunately, research reveals that the material is non-biodegradable.

The big question is – since styrofoam does not decompose, is the substance dangerous to human and environmental health?

Although styrofoam is used in food containers and packaging for cups and other household items, the substance can pose a serious threat to both human and environmental health. This is because it has the ability to release gaseous styrene when heated, which is harmful to the body.

Research shows that the release of styrene can trigger reactions like skin irritation, fatigue, and headache. This makes styrofoam harmful to human health.

Styrofoam is also lightweight. As a result of that, particles of the material can be blown or carried by the wind into water bodies, making them available as food for animals in the water. This can be toxic to the animals because of its chemical composition.

Styrofoam is very brittle; hence, it can be broken into tiny pieces that wind can carry to areas on land where animals can also eat them. Again, the chemical components in the styrofoam can be harmful to such animals.

Whether during production or after use, styrofoam poses a great threat to the atmosphere, environment, and inhabitants. The process of producing styrofoam involves some toxic chemical mixtures which can cause air pollution.

Furthermore, since most of the substances are not reused or recycled, they automatically occupy space in landfills, thereby leaching hazardous chemicals into the environment. However, using styrofoam and gasoline as glue is one way some folks have been able to derive value from the waste.

What Happens If Gasoline Touches Styrofoam?

Gasoline has a great impact on styrofoam. If gasoline touches styrofoam, it will cause the material to swell up and become brittle. Then, eventually disintegrate the styrofoam over time into a thick sticky substance with high flammability.

If you have items that are covered with styrofoam, you may want to keep them away, barring contact with gasoline. Not to forget, it is also risky to perform the gasoline–styrofoam experiment at home, as it can be extremely hazardous if you’re not careful.

Styrofoam and gasoline mixture are essential for manufacturing napalm. This was seen in World War II when the combo was used alongside benzene to produce “Napalm B.” This is typically a dangerous experiment to practice. 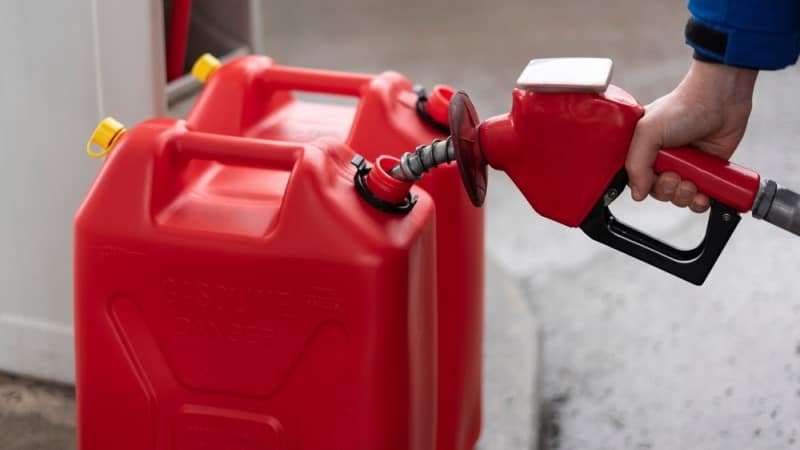 What Does Mixing Styrofoam And Gas Make?

Styrofoam and gas mixture forms napalm. This is a strategy used in producing homemade napalms. Usually, when the styrofoam is released into gasoline, the material breaks down and forms a sticky and gelatinous substance.

The styrofoam and gasoline reaction automatically causes the air in the styrofoam to escape, resulting in a wet and gooey substance. The outcome can be a mess. However, the substance is highly flammable, hence must be kept out of the reach of the fire.

The thick and sticky substance from the gas and styrofoam mixture can stick to the skin or any surface and burn at the same time when launched with fire. This is why it was useful war material during the Second World War.

What Will Dissolve Styrofoam?

Acetone is a very powerful substance that can dissolve styrofoam in the similitude of sugar in hot water. If you pour a small quantity of acetone into a bowl and add styrofoam to the liquid, it will automatically break down in a moment.

Using acetone is one of the effective ways to melt the styrofoam. The solvent is a naturally occurring substance containing carbon, hydrogen, and oxygen. It is mainly used in paint remover, nail polish remover, and varnish remover because of its ability to dissolve these substances.

Styrofoam and acetone cannot co-habit. The harsh content of acetone will dissolve the styrofoam, just like it does nail polish, paint, and varnish. This is a major reason why acetone is used in most industrial activities that involve removing tough clogs from machinery.

No matter what, burning styrofoam is not a good method of disposing of the substance. It can result in the release of toxic gaseous chemicals like styrene monomer, carbon black, and carbon monoxide into the atmosphere.

Irrespective of the fact that styrofoam is non-biodegradable, there are other means of getting rid of them by converting the substance into something else or dissolving them in acetone. Also, there are specifically designated organizations that collect styrofoam to utilize or discard them properly.

Is Napalm A War Crime?

However, different variants have been made and are still being used by some military forces around the world. This was a subtle way to shift operations from using the traditionally known napalm against civilians.

The stickiness and highly disastrous capacity of napalm make it a dangerous war tool to use, especially against civilians. This is why experimenting with styrofoam and gasoline to form homemade napalms is very risky.

What Does Styrofoam Do In A Molotov?

Styrofoam enables the fire in a molotov cocktail to stick to the targeted areas once it is launched. Typically, the molotov cocktail contains gasoline, alcohol, and a napalm-like substance (styrofoam).

When the wick in the molotov cocktail is lit, and the bottle is launched against a target, whether a vehicle or building, the flammable substances will explode. At the same time, the styrofoam helps the fire stay glued to the target until it burns completely.

For instance, the Ukrainian defense ministry unveiled and distributed a recipe to enable civilians to make styrofoam and gasoline Molotov cocktails that could stick to the targets as they were launched. This made the use of styrofoam and gasoline in Ukraine to become popular as they fought to defend their country against Russia.

Does Styrofoam Dissolve In Gasoline?

Yes, gasoline has the ability to dissolve styrofoam. Besides acetone, gas is another effective solvent that can break down styrofoam and cause the substance to disintegrate. However, the outcome is a highly flammable substance that can be hazardous if not properly handled.

Some fellows use styrofoam and gasoline as roof sealant due to the ability of the mixture to form a thick sticky substance. In other words, while the combo can be relatively hazardous, it can also be useful if properly applied.

How do you destroy styrofoam?

Cutting large styrofoam blocks into smaller pieces is one of the best ways to destroy the material before dumping it off in a waste bag. However, using a regular knife will leave particles of styrofoam all over the place.

So, it is advisable to use a hot knife to cut the big blocks into smaller cubes or tiny pieces so that it cuts accurately without leaving the residue of particles. You can also use an electric knife, X-Acto knife, cookie cutters, or foam cutting saw to destroy the styrofoam.

After that, pack the pieces into a trash bag. Then, contact Earth911.com or any other designated organization to collect the waste. Usually, Earth911 will require you to type in polystyrene and your unique zip code to show you the closest drop-off site for the waste.

Usually, gasoline and acetone are the major solvents that dissolve styrofoam. However, any other organic solvent like alcohol can also break down the material. It is revealed that alcohol, hot or oily food, and acid can partially break down styrofoam, causing styrene to leach into the food in the styrofoam container.

Therefore, using styrofoam packs or containers to hold hot food or alcohol is not ideal. Eating or drinking content in a styrofoam container can be very harmful to the body because of the styrene in the polystyrene from which the food pack was made.

It would be best to use alternative food containers or cups instead of the regular styrofoam containers used in most restaurants and food vendor outlets. Unfortunately, most people aren’t aware of the health hazard of using these containers.

At What Temperature Does Styrofoam Catch On Fire?

Styrofoam will automatically catch fire when exposed to higher temperatures, around 680 degrees Fahrenheit. The material is highly flammable; hence, it must be kept away from naked flame.

However, burning styrofoam is a hazardous method of getting rid of the material. The burning process will do more harm than good. Even though the fire will melt the material, burning polystyrene will give off toxic styrene chemicals, which can be dangerous to human health.

Styrene chemical has been linked to severe health problems like cancer, loss of vision and hearing, respiratory issues, etc. Therefore, no matter what, do not take the risk of burning styrofoam in naked flame, especially in the presence, close proximity of kids and where they live.

Melting styrofoam by exposing the material to fire can be extremely toxic. When the substance is exposed to acid or heat, the melting process will eventually release hazardous gas like styrene, which is a dangerous chemical to the human body.

Again, the ideal way to dispose of styrofoam is to cut the big blocks into tiny pieces with an electric or hot knife. This is because of the particles a typical kitchen knife will leave when cutting the foam.

Once you cut the foam into tiny bits, pack everything into a trash bag and reach out to the recommended organization designated to collect the styrofoam waste. Always remember that exposing styrofoam and gasoline in fire can cause serious havoc.

Meanwhile, if you don’t have a need for the substance, there’s no point trying to experiment by manufacturing homemade napalm. This is especially for fellows with children who may want to try what they’ve seen older people do.

Lastly, do not attempt to burn used styrofoam because it contains toxic pollutants. To keep safe, follow the recommendations above to discard them appropriately.