Manufacturers are constantly in competition in the automotive industry. Gone are the early days when the focus was to manufacture an automobile for the purpose of migrating people and goods from one place to another.

The automotive industry has evolved into an era where creativity is the order of the day. Different cars appear on the road every year with unique features, apart from their engine capacity and horsepower.

Manufacturers have also designed different types of car doors as part of the most recent trends in the industry. This article unveils some of the popular car doors and the cars on which you can find them.

Various auto manufacturers have introduced their unique creativity on their car brands as a signature to distinguish them on the road.

One of the most recent developments in the manufacturing of automobiles is the unique design of car doors. If you are contemplating, “How many car doors are there?” They are numerous. However, some of the most famous types of doors for cars include the following: 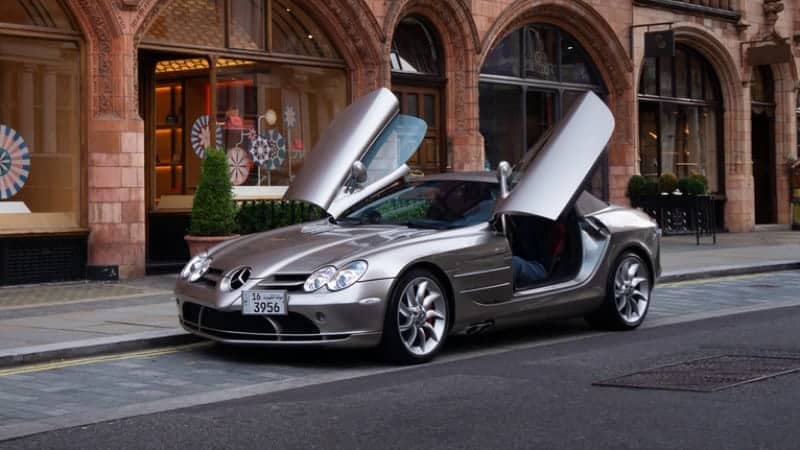 As the name implies, butterfly doors are built in the similitude of butterfly wings. The doors open exactly like the beautiful insect spread its wings to fly.

Butterfly doors are designed to open by swinging up and out via the hinges fixed along with the car’s A-pillars. The doors open so wide that the driver or passenger does not face any obstructions when entering or exiting the vehicle.

Butterfly doors open similarly to scissor doors; however, you can easily spot the difference in the space that butterfly doors create for entry and exit. 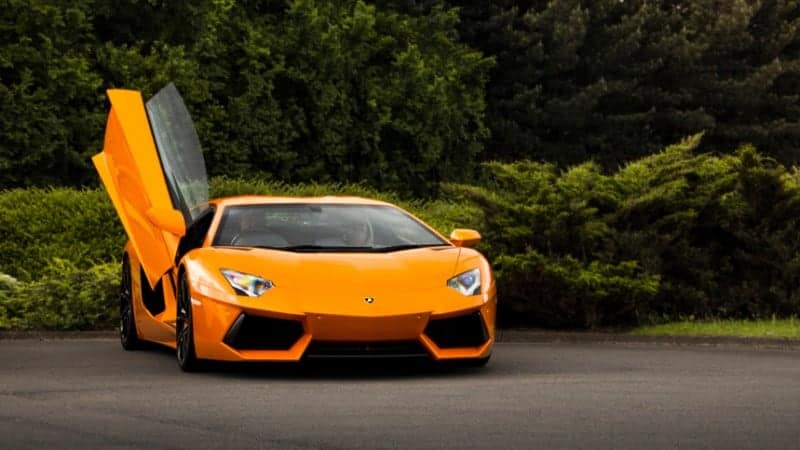 Luxury car brands like Lamborghini, McLaren, and Ferrari are unique for their scissor doors. This type of door is sometimes mistaken for butterfly doors. Although the two kinds of doors open alike, you can carefully differentiate cars with scissor doors.

Unlike conventional doors, scissor doors swing up vertically via the frontal hinges on which the doors are fixed. The doors open upwards like the sharp blades of a tailoring pair of scissors. Now you know the origin of the name “Scissor doors.”

Alfa Romeo Carabo invented scissors doors in 1968. The idea of limited parking spaces was the necessity that triggered the invention of the doors. Today, the doors are fitted on exclusive luxury cars that celebrities would do anything to have in their automobile collections. 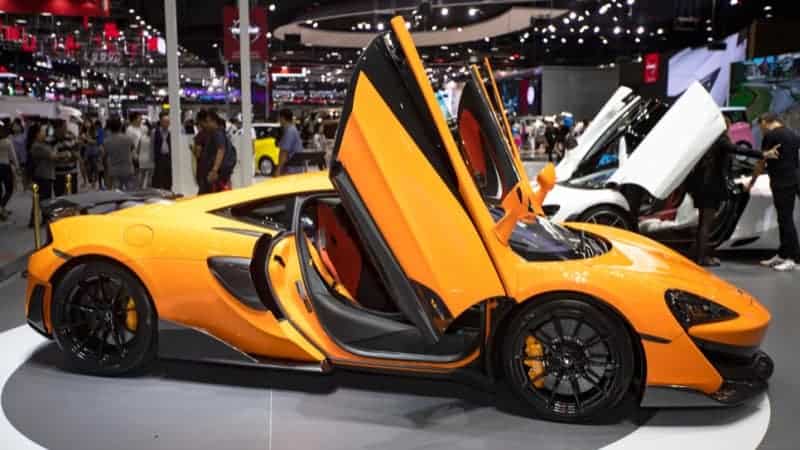 Dihedral doors are a type of doors that are built similarly to scissor doors. However, they are designed to open differently. Dihedral doors open through a mechanism that allows them to move outward and rotate at 90 degrees on the door hinges.

Some of the modern cars with dihedral doors include; Koenigsegg Agera, Regera, Agera RS, Koenigsegg CC8S, Agera R, and CCR. 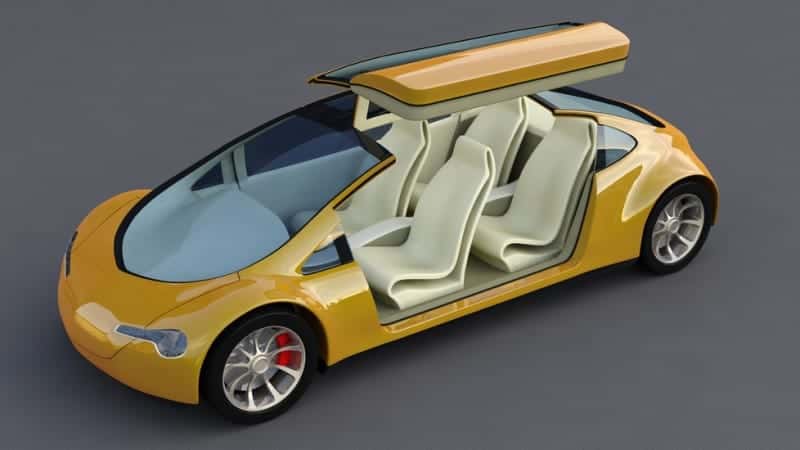 Gull-wing doors are also known as falcon-wing doors or up-door. They are designed to open upward via that hinge located at the roof of the cars on which they are fitted. The idea behind the gull-wing doors is the posture of a seagull’s wings. 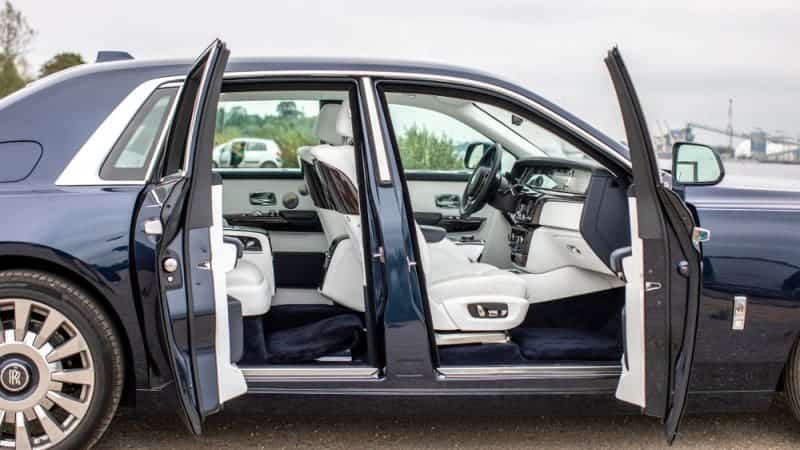 Suicide doors are unique creativity in the automotive industry. The doors are designed to open via the hinges at their rear. This is directly opposite the traditional directions to which car doors open. This type of door confirms that there are different types of ways car doors open.

The name “Suicide door” is slang that emanated from the idea that the doors are not as safe as car doors with their hinges in front. This type of door was first seen with carriages attached to horses many decades ago.

The origin of suicide doors can be traced to the first half of the twentieth (20th) century when horses with carriages were the most popular means of transportation. However, cars with suicide doors began to decline after World War II.

Sliding doors are common with buses, vans, and minivans. They are uniquely designed to open by sliding horizontally through a track on which the door is suspended. This type of door creates a broader space for entry and exit than other types of doors.

In 1954, Kaiser Darrin was the first car to feature sliding doors. It was an advanced version of a vehicle that was designed by Sidney Nobbs, a British Insurance Officer, in 1949. Sliding doors are still common today in buses, vans, sports utility vehicles, etc.

However, you can hardly find modern cars with sliding doors, especially luxury cars. This is because they are uniquely built for vehicles that convey goods more than people. 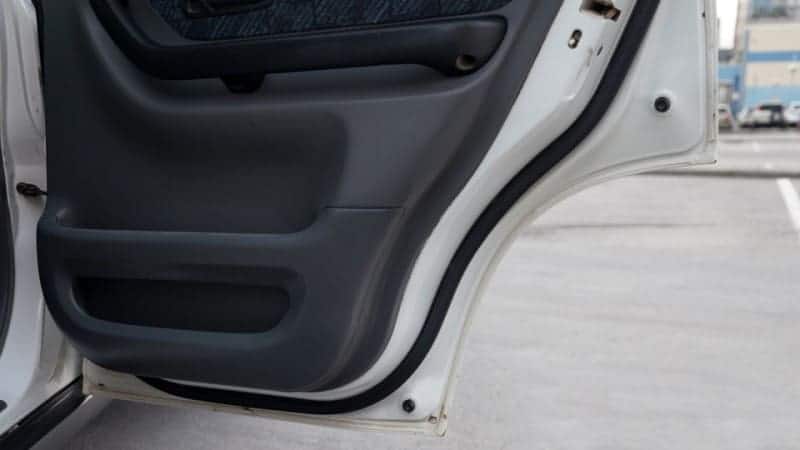 Pocket doors are designed as a unique type of sliding door. The doors operate in such a way that they open by sliding through the track on which the door is suspended like the regular sliding doors.

However, when the door opens, it changes its position into a specific compartment on the vehicle’s adjacent wall.

Pocket doors are common with train carriages and delivery vans. You can hardly find them in regular cars. Morris J4 and Renault Estafette are the most famous vehicles with pocket doors.

Normal car doors are called conventional or regular doors. They are hinged by the edge in front, facing the entrance/exit of the car. The flexible device that holds the door to the iron frame allows you to swing the door outward (open) and inward (close).

Regular or conventional car doors are the most common in many vehicles, especially older vehicles. This type of door is highly durable compared to some of its counterparts. Also, a regular car door grants easy access into and out of the car.

Q: What are butterfly car doors?

Butterfly car doors are a creative type of doors usually fitted on high-performance cars. They are a bit similar to scissor doors. However, the slight difference is the movement of the doors.

Butterfly doors have such a fantastic look that speaks of creativity. The manufacturers thoughtfully designed this type of car door for lovers of flashy inventions.

Scissor doors are attached to a fixed hinge firmly at the front of the car door frame, and they are designed to rotate vertically. This type of door is different from the conventional or regular car doors that open outward.

Scissor doors are usually found in luxury cars like Lamborghini. However, if you intend to enjoy this creativity, it only requires you to acquire a Lambo or convert your car’s doors to scissor doors.

Q: What are Tesla doors called?

Tesla doors are called falcon-wing doors. It is a creative name that is peculiar to Elon Musk’s Tesla car brands. Tesla introduced the Model X with falcon-wing doors in 2015. The car was fashioned with double-hinged gull-wing doors.

The falcon-wing doors’ design is built in such a way that they open upward, almost touching each other when they fully open. As a result, you can see through from one side of the door without any obstruction when both doors are fully open. Also, the front-view is such a lovely sight to behold.

Q: What are the Lambo doors called?

However, car enthusiasts have a way of tracing secondary creativity back to its primary root. So, they refer to these kinds of doors as Lambo doors irrespective of the car. Lambo doors speak of top-notch creativity and are mostly found in luxury cars.

Q: What are DeLorean doors called?

DeLorean doors are called gull-wing doors. They are a unique type of door specially designed by the DeLorean sports car manufacturer to complement its top-notch creativity. The gull-wing doors function by opening upwards like a giant bird releasing its wings to flap.

Car enthusiasts also refer to the gull-wing doors as falcon doors. The doors are pretty similar to the falcon-wing doors on Tesla’s Model X. However, when you look at both vehicles’ doors, you can easily spot the difference.

Q: What are McLaren doors called?

McLaren doors are known as dihedral doors. This is because the supercar manufacturer refused to name the doors butterfly doors irrespective of the resemblance. However, manufacturers like to be unique in their creativity; hence, the name is dihedral.

Naturally, celebrities and luxury lovers would do anything to have the McLaren supercar in their automobile collections.

Q: What kind of doors does Koenigseggs have?

The Koenigsegg’s doors are designed to move upwards and outwards simultaneously, creating such an awesome appearance like a robot bird. Owners of the Koenigseggs usually draw people’s attention when stepping out of their cars.

Q: What are the BMW i8 doors called?

The BMW i8 doors are known as butterfly doors. The doors are part of the most innovative features of the car. They are pretty similar to scissor doors and suicide doors. However, you can easily spot the difference when looking at the doors carefully.

Butterfly doors open in such a way that it looks like opening the center pages of a book from both sides to meet in the middle. It is such amazing creativity. This kind of door is found on high-performance cars.

Q: Which BMW has butterfly doors?

The uniqueness of the doors distinguishes the i8 Roadster from other BMW models or series. The doors are designed to open upwards and forward, granting easy entry and exit for the driver and passenger. However, some car enthusiasts have constantly compared scissor doors vs. butterfly doors.

Q: How much are Lamborghini butterfly doors?

Lamborghini butterfly doors cost around $2,999 to $4,300. However, if you intend to convert your car’s doors from the conventional or regular type to butterfly doors, you may have to budget between $3,000 to $5,000 for the kits and installation.

Butterfly doors are expensive because they are manufactured with luxury cars. So, if you are contemplating converting your regular car doors, create a special budget for this operation and include it in your general budget.

Q: How much does it cost to put Lambo doors on a Corvette?

It cost $2,999 to convert a Corvette’s doors to Lambo doors. The total cost includes 2 vertical doors that come with Lambo door hinges, 2 gas shocks, all hardware required for mounting the doors, installation, as well as a lifetime warranty.

Converting a Corvette’s doors to Lambo doors may be pretty expensive; however, if you desire to enjoy the luxury that Lamborghini owners enjoy, paying that amount for the conversion of your Corvette’s doors is worth it.

The different types of car doors in the automotive industry reveal the extent of creativity of various automakers. As a result, manufacturers are constantly unveiling astonishing designs every year, hitting up the competition in the industry.

Meanwhile, the new car door creativities have created wider spaces for entry and exit, unlike the regular car doors that come with some encumbrances.

So, if you desire to convert your car’s conventional doors to any of the new inventions, kindly contact an expert auto mechanic that is skilled in this area.