Automobiles keep evolving day by day. Manufacturers keep improving users’ experience by adding more features to modern cars to aid safety and extra power. One of these features is the VTEC. It adds extra power without a turbocharger or supercharger.

Though VTEC was first seen in a 1989 Honda Integra, it is still an incredible feature worth giving an accolade every time. So, what is VTEC, anyway?

By the end of this article, you’ll be able to answer what is VTEC engine and how it works. But, most importantly, you’ll know the best VTEC engines and understand the difference between VTEC and i-VTEC. 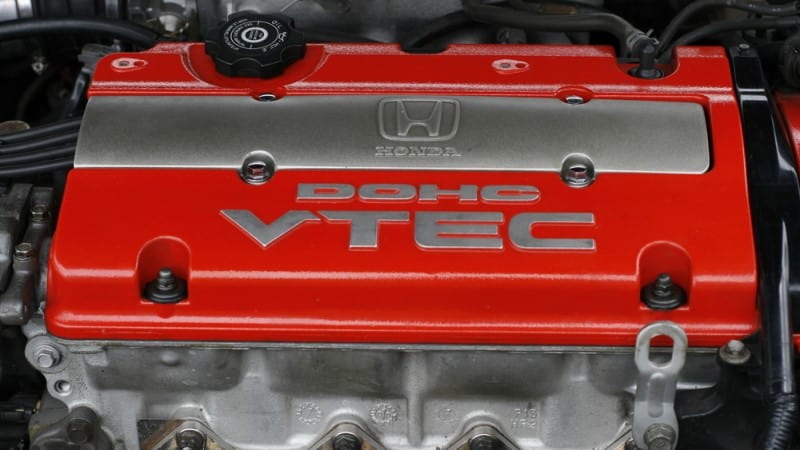 What is VTEC Engine?

“You may have heard of VTEC, but don’t mess with it, baby.” This feature converts your engine to a road beast. But what the heck is it?

VTEC is the full meaning of Variable Valve Timing and Lift Electronic Control. VTEC is an incredible technology that adjusts the size of your valve opening when driving, allowing more air-fuel ratio into the combustion chambers – turning the vehicle into a road beast.

VTEC cars were first seen in the Japanese car market in 1989 in a Honda Integra and in the North American car market in a first-generation Acura NXS. The VTEC engine was invented in the late 80s by a Honda engineer IKUO Kujitani.

The VTEC engine is commonly known as Variable Valve Timing (VVTi). Honda seems to be the only car with VTEC engines, but you will see VVTi, and VVT in most Toyota engines. Nissan calls it Variable Valve Lift (VVL), and Mitsubishi calls it MIVEC.

So, how does VTEC work? Let’s find out.

Read Also: SOHC vs. DOHC: Which Engine Is the Best?

How does VTEC work?

VVL, MIVEC, VVT, VVTi, and VTEC use oil pressure to change between different cam profiles. When driving at high speeds, the cam profile permits a wider valve opening, allowing more air intake into the cylinders. By this, the engine generates more horsepower.

VTEC is an incredible technology in Honda, and explaining how VTEC cars work with words can be confusing. Jason Fenske understood this and posted a well-explanatory video on how VTEC engines work. He explains the VTEC technology using diagrams and some of Honda’s best VTEC engines. This youtube video is worth every minute spent.

Read Also: How to Tell If You Have an Interference Engine?

What Is i-VTEC Engine?

The acronym i-VTEC, stands for intelligent variable timing and lift electronics. It is a Honda technology used in enhancing gas mileage and overall engine performance. Like VTEC, the i-VTEC uses two camshaft profiles.

The i-VTEC technology allows engines to shift between different cam profiles effectively. With this technology, the engine can alternate the camshaft lobes and shift the timing to achieve a higher revolution per minute (RPM).

The amazing idea of the i-VTEC is that it provides high-profile and low-profile cams so the engine can work effectively at any speed range. 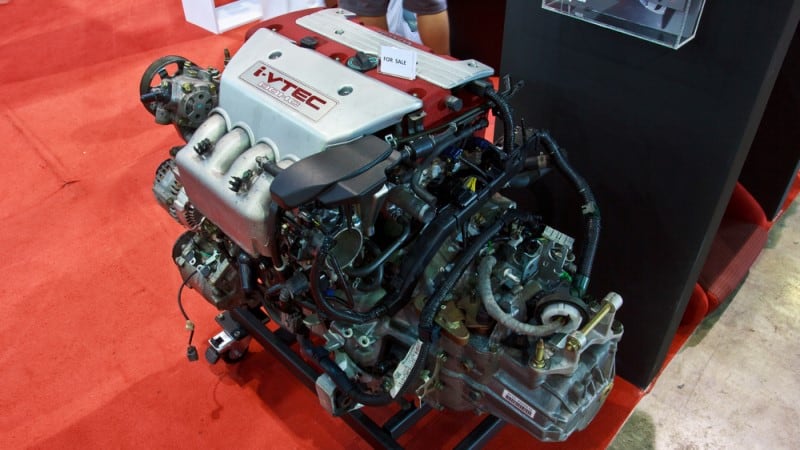 How does i-VTEC work?

To better understand how the i-VTEC engine works, let’s refresh our minds with how regular engines work.

The head valves allow the air-fuel mixture to get into the engine and expel the exhaust gases out of the engine. The valves do not open and close on their own. Instead, the cam lobes open and close them. There’s a critical connection between the position of the lobes on the camshaft and how the engine behaves on different gear ranges.

Normally, the intake valves will open when the piston starts moving downwards in the intake stroke. Then, when it returns, the valve will close, and the exhaust will open. This configuration is great as far as the engine maintains that speed.

But as you increase the engine speed, this configuration will not work as intended. So, for optimal performance in both low and high speed, the valves should open and close differently in each speed range.

With the i-VTEC technology and the engine having multiple camshafts, the engine will offer a seamless driving experience at low and high speeds. This shows why Honda i-VTEC engines have high performance and fuel economy. Let’s see the i-VTEC engine advantages.

i VTEC vs. VTEC ( Differences )

Having seen the VTEC and i-VTEC meaning, you may ask, what’s i-VTEC vs. VTEC difference? Or is it marketing hypes?

i-VTEC technology adds additional timing control. It achieves this by permitting camshaft angle adjustment. However, as reiterated above, the valves should open and close differently at different speed ranges. The VTEC does not have this feature. This is the primary difference between Honda i-VTEC vs. VTEC engines.

Therefore, i-VTEC is better than the traditional VTEC engines because they offer seamless performance and a smoother power band at low and high engine speeds.

Here’s what I mean; the ‘intelligent VTEC’ has all the features of VTEC and multiple cam profiles to adjust the engine timing at different speeds for better performance.

The most amazing feature of the i-VTEC technology is its high-speed and low-speed cam in the same engine. By this, the engine provides optimum performance at all speed ranges. The i-VTEC technology makes cars more efficient and faster and gives the driver confidence on the wheel.

Q: Which VTEC engine is best?

Honda has several high-performance VTEC engines. These engines meet the customer’s expectations. However, our pick and one of the top-rated Honda VTEC engines is the K20A.

The B18B1 is a good turbo engine with low compression, making it a good choice for most Honda car enthusiasts. It was manufactured from 1994 -2004. The B18B1 became a ‘go-to’ for an engine swap, commonly called ‘LS swap’ among Honda car enthusiasts. It is a 1.8L engine with 127 ft-lbs of torque and 142 horsepower. However, the B18B1 is a non-VTEC engine.

Q: Do all Honda engines have VTEC?

Honda is known for producing vehicles with VTEC engines. As a result, nearly all Honda cars use VTEC engines to enhance power output on the road. However, it wasn’t like this year back. For instance, not even a single Honda had VTEC before 1989. VTEC was originally designed for high-performance cars, but Honda has slowly featured them in regular cars.

The Honda Civic Type R is the fastest Honda engine ever marketed in the United States. It provides the acceleration sporting enthusiasts and spirited drivers dream of, outbursting 306 horsepower at 6,500 RPM when using unleaded gas and 291 ft-lbs gained at 2,500 RPM and maintained up to 4,500 RPM.

The exhaust valves are built with special sodium, which helps erase heat from the valve surfaces for increased dependability. In addition, it features exhaust-cam VTEC and Variable timing control (VTC) to lower gas emissions.

Q: What is DOHC VTEC?

To offer peak performance, manufacturers optimized the camshafts for low RPM since vehicles run on low RPMs before hitting the highway. However, Honda engineers developed the VTEC engines, which can automatically switch from low to high camshaft profiles. This enhances the engine performance.

Q: Is K-series better than B-series?

Both Honda K and B-series are powerful engines. However, they have their distinct differences. They’re generally good when comparing the pros and cons, But the K-series is a better engine, equipped with newer technology.

Q: Is VTEC faster than turbo?

While VTEC technology is a welcomed innovation, it is nothing compared with turbo. With turbo, the engine produces more horsepower and torque, while VTEC only pulls the maximum horsepower out of the engine since we can feel the torque on VTEC cars in the VTEC range.

This means you can feel the horsepower on VTEC engines when driving around 5,500 RPM. Simply put, turbo is faster than VTEC engines.

Q: What head gasket do you use for LS VTEC?

The Head gasket plays an important role in sealing the head cylinder with the engine block. It also prevents the engine oil from mixing with the engine coolant. If this component fails, It will cause overheating and oil and coolant mixing together.

Q: Can you supercharge a VTEC engine?

Q: Which is better, VTEC or i-VTEC?

Understanding what the i-VTEC means will enable you to compare i-VTEC vs. VTEC. Honda saw a need to improve the VTEC and achieved this need in 2001 by creating an i-VTEC engine. This stands for intelligent VTEC.

So which is better? i-VTEC offers extra control by adjusting the angles of the camshaft. The cams should open and close differently at each RPM range for efficient performance. The i-VTEC does this with ease, while the VTEC lacks this feature.

This is an important i-VTEC advantage that gives it an edge over the VTEC engines.

In summary, VTEC is Honda’s terminology for variable valve timing technology. It’s just like the Toyota VVT-i system and the BMW Vanos. But, if you were asking, what is VTEC? It is an acronym for Variable Timing Electronics Control.

However, Honda has two variations of this technology that work with varying similarities. This includes the i-VTEC and the VTEC-E. So, do not confuse any of these variations with the other.