Engine technology is evolving and improving every passing day. There are several existing options that different automakers and engine designers use when coming up with an engine. The two most common types of camshaft engines in the market today are SOHC and DOHC. All the camshaft engine types have three elementary components in their head that trigger the exhaust and intake.

They include valves, rocker arms, and camshafts. There is a lot of argument on which engine design is better between the SOHC vs. DOHC. Below we shall discuss the differences between SOHC vs. DOHC engines. We will also state their downsides and upsides. The information will help you to select the engine type that fits your needs.

What Is A Single Overhead Cam (SOHC) Engine?

SOHC stands for Single Overhead Camshaft. This type of engine is prevalent. The SOHC works with both V and inline configurations. Just like the name suggests, a single camshaft in the engine is located over the cylinders.

The camshaft rotates in real-time. The valves are either directly operated through the lifters or by the rocker’s arms. The Single Overhead Camshaft activates both the exhaust valves and the fuel intake. This means that there are at most two valves in a cylinder that resembles and acts like a pushrod engine. 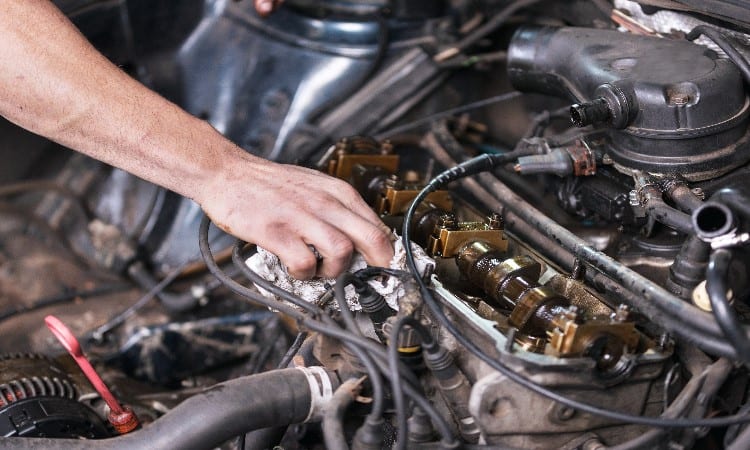 The two valves are controlled simultaneously, meaning that the SOHC engines work similarly to their pushrod counterparts. The SOHC is, however, more robust since it does not have the integral risk of floating and bent pushrods. Single Overhead Camshafts engines use a timing belt to keep the camshaft and crankshaft synced. It is also possible to have a SOHC 4 valve but this translates into a complicated combination of cam lobe shapes and rocker’s arms.

The upside of using the SOHC engines is that they are cheaper and easier to manufacture. They are also much lighter compared to DOHC engines. The maintenance cost of SOHC engines is less since only a few parts are used in the configuration.

What Is A Dual Overhead Cam (DOHC) Engine?

DOHC, also known as Twin Cam, is the other type of engine whose popularity is increasing due to its efficiency. The Dual Overhead Cam engines work either with the V-shapes or inline engines. They are, however, more commonly used with the Vs. The two camshafts in this engine reside over the heads. It has four valves in each cylinder, and an overhead camshaft controls every two of these valves. 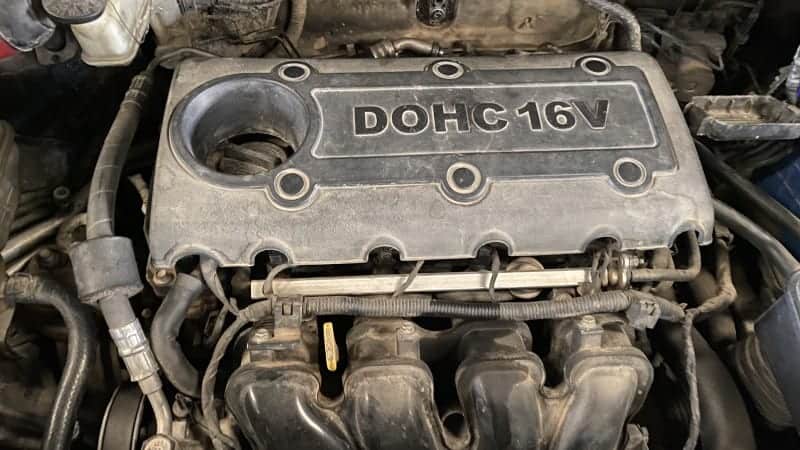 The DOHC engine produces more power and is more efficient than the SOHC engines. On the SOHC vs. DOHC sound, the latter runs quietly and can be used on a higher RPM. These are some of the reasons which have made DOHC engines gain popularity in the automotive industry, which is geared towards lower exhaust emissions and a better economy.

On the downside, DOHC engines are much more complex and more challenging to produce compared to SOHC engines. They are also hard to repair, and the maintenance cost is a bit high.

Difference between SOHC and DOHC Engines

SOHC and DOHC differ in many ways. Physically, the SOHC has a single camshaft while a DOHC has twin camshafts over the head of the engine. Apart from this physical difference, their performance is also not the same. These are the differences between the two engines: 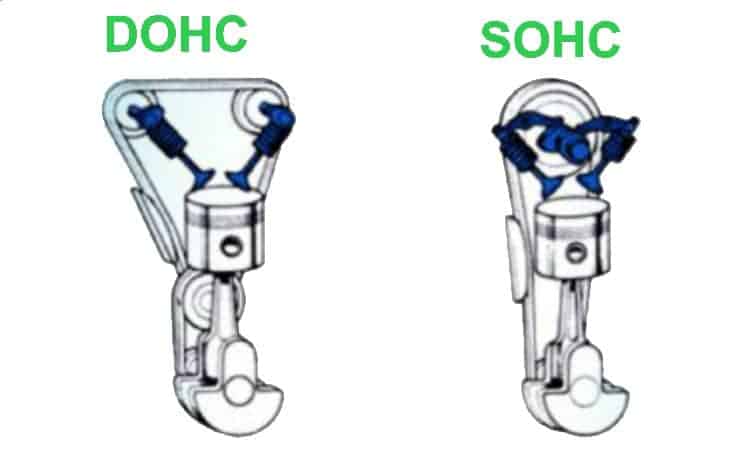 Q: What Is The Advantage Of DOHC?

Ans: The major advantage of DOHC engines is that they easily integrate four valves for every single cylinder, which include two exhaust valves and two intake valves. The four valves in the cylinder allow a smoother flow of gases and fuel both out and in the cylinder.

The four-stroke cycle, therefore, increases the performance mainly at high speeds. Secondly, the diesel injector or the spark plug is located at the center of the cylinder, which increases efficiency in the burning of the fuel and air mixture.

This engine also has separate exhaust and intake valves, which enables the cam phasing to be continuously altered when in use. This allows a single engine to be tuned for both high and low rpm power.

The engine makes more power when more air gets into the cylinder, and it will waste less power if it is able to pump the exhaust out of the cylinder easily. The four valves in the DOHC engine allow the engine to inflate sufficient air to run and produce useful power at high speeds.

Q: What Is The Best DOHC or SOHC?

Ans: The engine type you choose should be based on your needs. SOHC and DOHC engines are different, and they both have their upsides and downsides. The Single Overhead Camshaft means that you have a single camshaft working both for the exhaust and intake valves.

SOHC engines are cheaper to manufacture, maintain, and repair. Their fuel efficiency and performance, however, cannot be compared with that of DOHC engines. DOHC engines have two camshafts one which controls the intake valves while the other is responsible for the exhaust valves.

SOHC engines are fuel-efficient, but DOHC can reflect more fuel efficiency depending on the design of the engine and the skills of the driver. The Dual Overhead Camshaft also has better valve timing compared to its counterpart.

The spark plug in the DOHC engine is optimally placed thus improving the combustion efficiency. We can simplify this by saying that DOHC has a better high-end power while SOHC has better low-end power. DOHC is more expensive, but they are worth the investment.

Q: How Many Camshafts Does a DOHC v8 Have?

Ans: The DOHC v8 has four camshafts. Dual Over Head Camshaft means that each cylinder has two camshafts at the top of the engine head. Engines that have more than a single cylinder bank, like the V8 and V6, have two camshafts per cylinder head.

Q: Is Twin Cam And DOHC The Same?

Ans: A twin-cam is an engine with two camshafts that operate both the exhaust and intake valves. One camshaft operates the exhaust valves while the other controls the intake valves. It is, therefore, the same as the Double Overhead Camshaft. They are more efficient and have higher power than SOHC engines.

SOHC vs. DOHC engines is quite different. The type of engine you choose should be based on your needs. The SOHC has a single camshaft while the DOHC has double camshafts on top of each cylinder head. It has better fuel efficiencies at high speed compared to SOHC.

The older vehicles were manufactured with SOHC engines while the modern cars are made with DOHC engines. The efficiency in valve timing in the DOHC has made the engines to be quiet and cooler when on the move. The extra valves make the vehicles heavier but their performance levels are quite high.

At low torque, the DOHC and SOHC produce the same power, but DOHC makes more power as you increase the rpm. You can perform some engine swaps if you want to upgrade from SOHC to DOHC.