A vehicle’s battery is an essential component. It plays a crucial role in the ignition process and enhances the proper running of the vehicle. However, this component can run out of power due to several factors.

Running your car’s battery flat (dead) can be frustrating if you don’t have means of rejuvenating it. However, not all car battery chargers are safe for your battery. That’s why you need a trickle charger.

If you’re contemplating, “Will a trickle charger charge a dead battery?” Just sit back, relax, and study every bit of this article.

What is Trickle Charger Exactly?

A trickle battery charger is a vehicle battery charging device designed with attachment clips that clasp the battery firmly over an extended period. The device is meant to recharge the battery with the equivalent of its power depletion rate. It slowly charges the car battery and retains its power level so that it doesn’t go through the conventional depletion process.

Trickle chargers come in different forms with varying amps levels to suit specific batteries, as well as various power levels. While some people argue that users can leave trickle chargers for months, others have the opinion of leaving them for a few weeks.

However, the time frame within which you can leave a trickle charger on a car battery depends on how quickly the battery charges to full capacity and the power dispensing rate of the charger.

Read Also: How To Jump Start A Car? 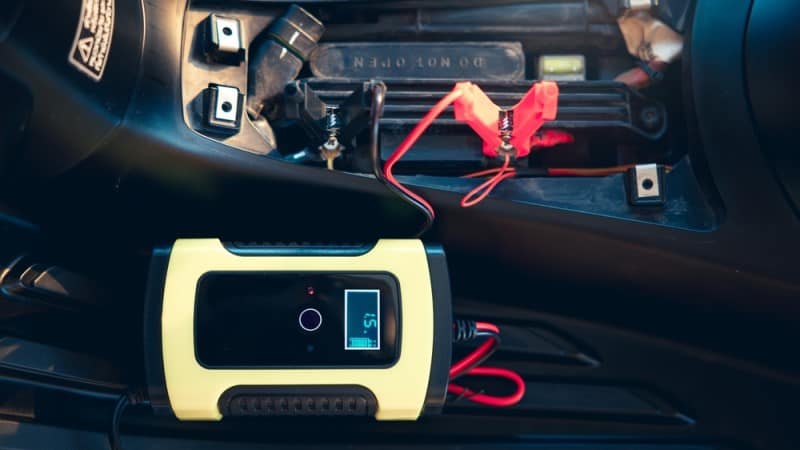 How Does Trickle Charger work?

The trickle charger is designed with a regulator that adjusts its charging rate to align with the degree of power discharge from a battery. This helps to recharge the battery at the same level at which it discharges.

Also, the regulator ensures that the trickle charger doesn’t overcharge the battery, resulting in unexpected damage. The charger has a couple of features that enable a user to ascertain the best charging rate for a vehicle’s battery.

The charger is designed with a simple box, two alligator cables, and a power cable. Before connecting the charger, ensure to set the amperage and voltage to align with your battery’s amps and volts level. This will help to dispense the charge appropriately.

Will a Trickle Charger Charge a Dead Battery?

A trickle charger has the capacity to revive your car’s dead (flat) battery. However, the device may not be able to restore a battery with an exhausted lifespan.

A trickle charger can rejuvenate a dead battery and charge it to full capacity within 24 – 48 hours, depending on the charger’s amps.

Batteries are designed to last up to 3 – 4 years. Once the lifespan is exhausted and your car battery finally dies, it will be difficult to resurrect it. The best solution is to replace the battery with a recommended brand.

Not to ignore, you must avoid practices that endanger your battery’s health, especially overcharging or undercharging. Therefore, it is important to stick to the recommended battery charger and the most appropriate charging amperage and voltage.

How to Trickle Charge a Dead Car Battery

A popular acronym, ABC reads – Always Be Careful. The first point of focus when performing an electrical or mechanical exercise is safety. This includes your safety, the safety of everyone around, and the safety of the object you’re working on.

Therefore, ensure to park properly in a ventilated area on a plain-level surface. Then, turn off the vehicle’s ignition, and remove the key.

Kindly note that charging the battery in an enclosed area can result in too much concentration of hydrogen gas. This can lead to fire or explosion. This is why a well-ventilated rain-free area is crucial.

After ensuring that you have followed all safety protocols, identify a bare metal area to use as the ground.

Some of the most suitable locations that you can use for this purpose include the engine block, any huge bolt on the chassis, or a bare frame free from oil, dirt, grime, etc.

Never consider using the negative terminal of your car’s battery as a ground. It can lead to an explosion.

So, once you identify a suitable ground, ensure to attach your trickle charger’s negative terminal to this ground in step 3 below. This is very vital because it influences how safe and effective your battery will charge.

Now, pick up the alligator clips, which consist of red (positive) and black (negative) cables with their separate clips. Then, attach the positive cable’s clip to the positive terminal of the vehicle’s battery. Ensure that the cable is firmly attached without shaking.

After that, attach the negative cable’s clip to the ground you identified in step 2 above. Also, make sure that it is firmly attached.

Step 4: Turn on the trickle charger.

Once you ascertain that you have successfully connected the cables, set the charger on the appropriate amperage and voltage. Confirm the recommended setting for your specific vehicle’s battery before commencing the charging process.

After that, plug the trickle charger into a stable power source and turn it on. Meanwhile, ensure that you or anyone around does not touch the connections after you turn on the charger. It can lead to severe electrocution or injuries.

Kindly note that the amp meter on some chargers will display a particular reading on the meter once you turn it on. It will either read higher or go down to “0”.

If you’re not sure of how long to trickle charge a car battery, stick to the recommended time frame according to the manufacturer’s manual and your battery capacity.

However, if the battery fails to charge after ascertaining that the connections are perfectly done, you most likely have a damaged battery.

There’s no point trickle charging a completely damaged battery. The solution is to get a new replacement immediately to keep your car running again. 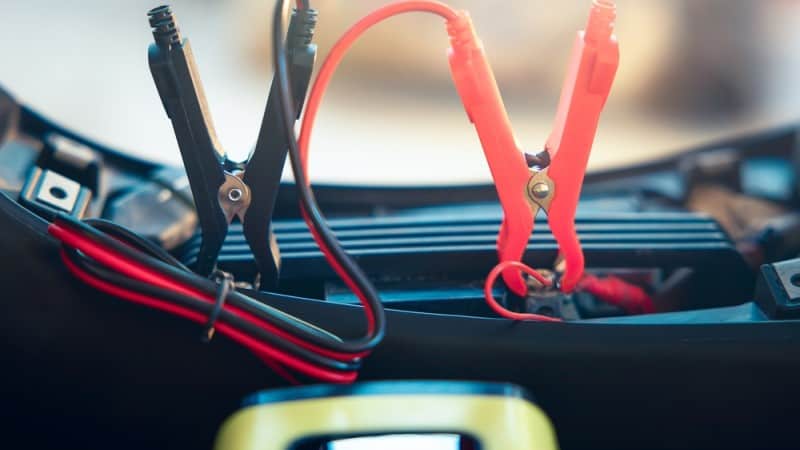 Q: How long will it take a trickle charger to charge a dead battery?

So, if you’re wondering, “How long does a trickle charger take to charge a 12V battery?” You can be sure of a full charge within 48 hours. Of course, a trickle charger charges vehicle batteries slower than regular chargers. It is designed to charge slowly without damaging the battery.

Q: Will a trickle charger charge a low battery?

Yes, a trickle charger will charge a low battery perfectly. The charge is designed to not only charge the battery but also retain the battery’s health through a consistent low charge. It is essential to note that slow charging a battery is best if you must prevent it from getting damaged.

So, if your car’s battery is running low, don’t be in a hurry to recharge with a regular fast charging charger. If you’re not careful enough, you may damage the battery by overcharging. Therefore, trickle charging will help you overcome this challenge.

Q: Can you charge a battery that’s completely dead?

Of course, you can rejuvenate a battery that’s completely dead. You simply need a trickle charger to do the job.

Although the trickle charger will recharge the battery quite slowly, it will ensure that the battery stays healthy without complications that result from overcharging.

Replacing a vehicle’s battery is pretty expensive; hence, the need for an alternative way to revamp a dead battery. So, a trickle charger is your best bet in this situation. Otherwise, using a regular fast charger may damage the battery due to overcharging.

Q: Is it better to slow charge a dead battery?

It is better to apply slow and steady charging to revive your car’s dead battery. However, the charging process may take up to around 24 – 48 hours, as the case may be.

In any case, retaining your battery’s health is better than damaging it with fast charging. Meanwhile, if you’re not sure of how often to trickle charge a car battery, kindly visit the manufacturer’s manual.

Q: Can a trickle charger revive a dead battery?

If you’re wondering, “Will a trickle charger charge a dead motorcycle battery or a car’s battery?” It can recharge a dead (flat) battery slowly until fully charged. However, it may not be able to resurrect a completely dead (overused) battery that has attained its lifespan or beyond.

Vehicle batteries, like other components, are designed with a specific lifespan. Therefore, you must work within the time frame to get a new replacement once the battery attains its expected lifespan. You will most likely need a new battery after 3 – 4 years.

Q: How do you know if a trickle charger is working?

For example, the movement of the ammeter needle away from “0” signifies that the device is functioning. Also, the voltmeter displays the vehicle battery’s voltage level. So, these are two basic areas that easily reveal whether your trickle charger is functioning or not.

Q: Can you leave a trickle charger on all the time?

Therefore, although a trickle charger works slowly to ensure that the battery stays healthy, leaving it on for too long is not advisable.

Q: Can you recharge a car battery with a trickle charger?

While a 1-amp charger may require up to 48 hours to charge a flat battery, a 2-amp charger will do the job half the time its 1-amp counterpart takes.

So, if you’re battling a flat car battery, kindly trickle charge it before thinking of a replacement as soon as possible. This will save you both stress and money.

By now, if you come across anyone asking, “Will a trickle charger charge a dead battery?” you already know the answer to give that fellow.

Of course, a slow trickle battery charger can revamp a dead (flat) battery and charge it to full capacity with time (24 hours or more, as the case may be). Simply determine the best amperage charger for your battery.

However, if the charger fails to charge the battery, you most likely have a completely damaged battery that has reached its lifespan. So, ensure to get a new battery for your car ASAP!