Engine overheating is a problem many car owners are familiar with. There are many reasons behind this problem, including a hitch with the cooling system. The discussion shifts to the antifreeze vs. coolant debate. Here we look at two critical components of the vehicle cooling unit.

Many people wrongly use the terms antifreeze and coolant to refer to the same item; the liquid that regulates the temperature of a system. The two are different substances. To know more about coolant and antifreeze, stick on for a comprehensive look. 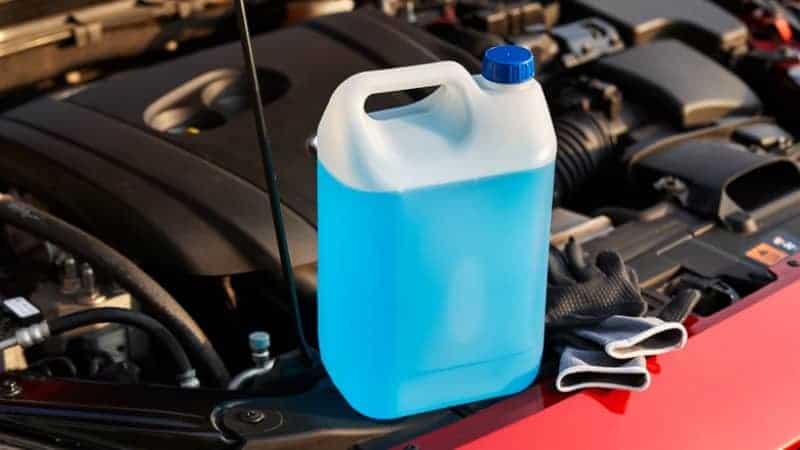 We start the discussion by looking at antifreeze. It is a common item in most garages and spare part shops. It is a liquid added to water to alter its changes when exposed to temperature changes. It lowers the freezing point and raises the boiling point of water.

What is the essence of water in the engine? For a long time, water was the go-to solution for overheating. The problem is that it has a heat liquid range of 10-degrees Celsius, limiting its functions as it expands when frozen. When not checked, it can burst some systems in the engine bay.

Antifreeze comes into the equation to stabilize water and boost its cooling properties. Antifreeze’s primary components are organic substances with low molecular weight, such as methanol, ethylene glycol, and ethanol.

Additionally, this product contains anti-rust properties, which prevent its containers from corroding.   Where does antifreeze go? You put antifreeze in the coolant reservoir. Older models may lack this part, so you put the liquid in the car radiator.

Another vital thing to know is the antifreeze color. You may find colors like green, red, and yellow. The colors represent different manufacturing technologies, which are fit for individual vehicle models. Can you mix antifreeze colors? No, you should never mix the colors, as it can do more harm to your vehicles.

Can you use straight antifreeze in the engine? Antifreeze on its own is not effective in cooling the engine as it does not have the best heat transferring properties. Using pure antifreeze will lead to engine problems like overheating. 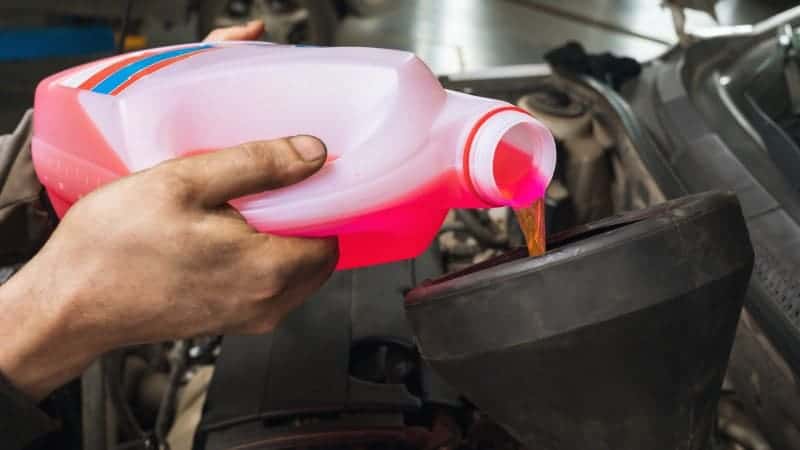 On to the next part of our discussion, we look at the coolant. As earlier hinted, it is a mixture of water and antifreeze, where the latter substance makes the water more efficient in heat regulation. The combination is typically 50/50 for water and antifreeze. However, you might require more antifreeze, almost 70%, in some conditions, like when driving in extremely cold conditions.

The other benefit of adding antifreeze to water to make coolant is that it prevents the deterioration of car parts. Water alone will lead to rusting of the metallic elements. However, the antifreeze added has anti-corrosion properties. Additionally, coolant helps in the dissipation of heat. It absorbs heat and transfers it to other parts, an essential step in heat regulation.

There are waterless coolants, which, as their name suggests, use no water. They have a higher boiling point of 375-degrees Fahrenheit, which is pretty high than the water-based type. It is a glycol-based liquid commonly used in the auto-sport scene, snowmobiles, and older vehicle models.

A thing to know is that antifreeze is hazardous and can cause serious health implications when ingested. Always keep it labeled and far from pets and children’s reach. Additionally, it is flammable, meaning it should not be near open flames.

How much coolant should a car run on? In the coolant reservoir, this fluid should be on the maximum level. The tank has marks indicating the levels. What if using a radiator? A radiator does not have marked levels, so fill it to the brim to be on the safe side.

Can I make coolant at home? With the right ingredients, you can make your coolant. You will need antifreeze and distilled water. Get a large container, dependent on how much coolant you want, like a bucket.

Use a 1:1 ratio for the mixture. For instance, mix one gallon of water with one gallon of antifreeze. Thoroughly mix the combination and pour it into the coolant reservoir. If there is some remnant, put it in a well-sealed container and store it safely.

After answering, what antifreeze does, you can see the contrasting points. Antifreeze is the substance added to water to alter its boiling and freezing points. On the other hand, coolant is a mixture of water and antifreeze. You also learn that there are coolants that do not use water.

Coolant will go directly into the radiator or coolant reservoir. This is not the case with pure or straight antifreeze, as it may lead to several engine complications.

Q: Are Coolant And Antifreeze The Same Thing?

Coolant is the fluid that circulates through passages in the engine block to regulate heat. Many people wrongly refer to it as antifreeze. They are not the same thing, as you have to mix water and antifreeze to make coolant. The mixture makes water an efficient cooler, capable of absorbing and dissipating heat.

Q: Can I Put Antifreeze In My Engine Coolant?

Engine coolant is a combination of distilled water and antifreeze in equal proportions. It plays a role in regulating heat produced by the engine, improving its resilience and overall functionality. If your coolant runs low, you can prepare it at home by mixing antifreeze and water in a 1:1 ratio. In low-temperature settings, you may increase the amount of antifreeze, up to 70% of the mixture for smooth driving.

Q: How Do You Know If Your Car Needs Antifreeze?

There are several signs to keep up with to know if you need a coolant refill. They include the temperature gauge readings showing a higher than average heat when the engine runs. You may also notice rust specs in the coolant reservoir and grinding noise from the hood when driving.

Additionally, you may notice an odor similar to boiling maple syrup from your engine. If you encounter any of these signs, you may need to check on your coolant levels. In other cases, the symptoms may point to a damaged radiator, especially the overheating and leaking part.

Q: Why Is Coolant Called Antifreeze?

In the automotive scene, it is common to refer to coolant as antifreeze. There are many reasons for this, such as the standard coolant having some antifreeze in it, actually 50% or more. The other possible explanation is that it supports the engine in low temperatures.

Q: Is Antifreeze Coolant For AC?

An air conditioning unit is a valuable appliance that regulates the heat and humidity of a room. Functionally, it appears similar to the engine’s cooling system. The latter uses coolant to absorb and spread heat, and it circulates through the action of a water pump.

On the flip side, the AC unit uses a refrigerant that absorbs heat to control the temperature in a room.

A coolant is an essential item for your vehicle’s engine, aiding in temperature control. At times, it goes by antifreeze, which by now you realize are different things. As a vehicle owner or enthusiast, this article will guide you in understanding the variations between antifreeze and coolant.

Always keep the coolant or antifreeze safely, as it can be hazardous if not properly handled.

link to When and How Long Can You Use Water As Coolant?

Most folks do not carry coolant or any lubricant in their car while driving. But what happens if the car runs out of coolant while on the go and has only water as an option? Can you use water as...

Hybrid cars are built with a lot of similarities to regular gasoline-only vehicles; hence, the reason why their components are sometimes misunderstood. The Prius is a classic example of such a hybrid...