Despite the sizes of fuses, they play an essential role in a car. However, like some vehicle components, fuses do not have a guaranteed lifespan. They can blow off when trying to prevent high voltage from traveling to the components they’re safeguarding. If they grant passage to this high voltage, it will damage the electrical component they are guarding. Primarily, the excessive voltage will not blow the fuse unless the key component draws excessive current. 30 Amp fuses in cars are used to provide overcurrent safety protection on electrical circuits that uses 30 amperages. Examples are the ignition and the AC. For a 30 amp fuse to effectively carry out its safety job, it serves as a fragile joint in the electrical circuit.

Therefore, when an overcurrent circuit travels to the AC or ignition, it’ll overheat and cut the metal strip that links the two fuse terminals together. Remember, this metal strip transmits electric flow from one part of the fuse terminal to the other. So, once the strip breaks, it prevents the high current from passing through and protects the key component from damage.

Generally, 30 amperage fuses are used in cars to protect 500-watt sound systems, electric radiator fans, and heater blower motors. In any case, the fuse’s amperage depends on the capacity and size of the audio system.

Auto manufacturers and aftermarket producers design fuses in various types. If you look at the fuse boxes in your vehicle, you’ll notice that some fuses have a cartridge-style while others have a blade style.

You’ll also notice that these fuses are made with different materials and have different colors. The materials and colors show the fuse’s amperage. For example, a 30 amp fuse is pink with a light blue cover with a ‘30’ inscription on the cover. The ‘30’ shows it is a 30 amp fuse.

Testing a fuse is a DIY skill every armature mechanic and car owner should know. At one point in time, you’ll need to test a certain fuse to see if the component they’re protecting is bad or if the fuse blew off.

There are three methods of testing 30 amp fuses. The most common method is using a multimeter. We’ll explain that in a moment. But first, let’s look at how to tell if a fuse is blown without a multimeter.

You will know a blown fuse by visual inspection. First, locate the fuse box and open it. The fuse box is located under the hood, close the battery, or behind the driver’s door underneath the dashboard.

Remember, I said 30 amp fuses have a pink coating and a blue cover? That’s not always the case. Some 30 amp fuses are like the normal 5, 10, 15, and 20 fuses. If the 30 amp fuse you want to check has this design, you can check it via visual inspection or using a test light.

What’s next? Touch the test light’s metal pin on the terminal or contacts on the fuse. The test light should light up. Next, do it on the second terminal and expect it to light up. If the light comes up on both terminals, the fuse is okay. If not, you have a blown fuse that needs replacement.

The last and most common method is using a multimeter. This method is more suitable for those fuses in a box like the pink 30 amp fuse with a blue cover.

Get your multimeter and set it to ohm settings. First, make sure you fix the probes on the multimeter properly. Then, touch the two probes and record the reading. You should get the same or similar reading when you test the fuse.

Connect the probes to the metal contacts on the fuse. If you have the same or similar results, the fuse is still okay. 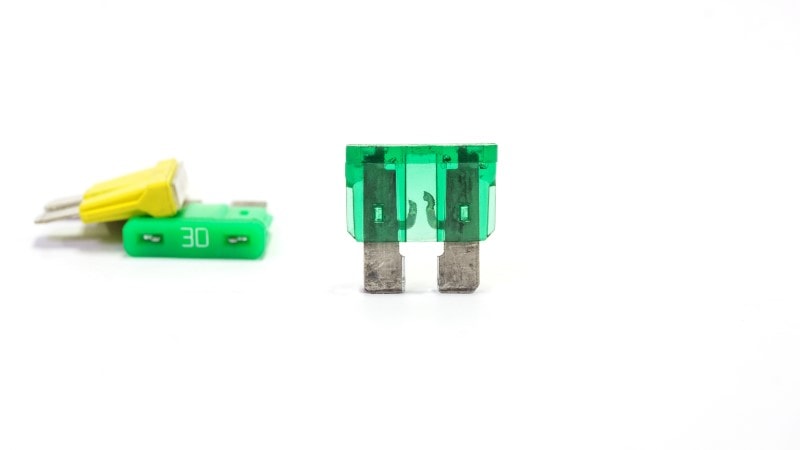 A 30-amperage fuse has a wire or metal strip that links the terminals together. These metal strips can be copper, aluminum, alloy, zinc, or silver. This strip or wire transmits electric flow to both contacts. You can know if the fuse is blown when you see the wire or strip is discontinued due to high electric voltage. The high electric flow will cut the wire or metal strip that links the fuse terminals together and require replacing the fuse.

Therefore, a blown or broken 30 amperage fuse will look like having a broken wire or strip running across the two metal contacts of a fuse.

Fuses come in various types, colors, and capacities. However, regardless of the type of fuse you have, all fuses have one thing in common – the wire or metal strip that connects the terminals. Since 30 amperage fuses are usually in cartridge styles, I’d recommend you remove the cover to inspect it during a visual inspection.

A functioning 30 amperage fuse and a good one have clear differences. A good one will still have a metal strip across the two terminals, while the strip on the blown one will be broken due to high voltage or bridge somewhere in the corresponding lines. The wires are not hidden. So, it doesn’t take much to know whether it has broken.

This, however, is the main function of a fuse and relays. Therefore, when there is high voltage in the corresponding line, they blow up instead of damaging the principal component in the vehicle.

Read Also: What Does a Blown 50 Amp Fuse Look Like?

What Happens When A 30 Amp Fuse Blows?

Now that we’ve answered the question, ‘what does a blown glass fuse looks like’ what happens when the fuse blows? A 30 amps fuse has a transparent metal or plastic casing through which you can see the wire that links the two terminals together. Suppose the fuse blows, and the wire that links the two contacts will be cut. Also, you’ll see cloudiness or a melted ribbon in the fuse.

Besides this, the corresponding component they’re protecting will not receive any electric flow. Therefore, the components will not function until you replace the blown fuse. So, don’t wrap the wire around the fuse and snap it into the port. Thus, you will blow the electronic component when you have high electric voltage across the component.

How To Change Blown 30 Amp Fuse

How to change a blown 30 amps fuse is simple. It will be as easy as replacing your 12v battery with the right guide. So, we’ll walk you through how to replace a blown 30 amp fuse in the following steps.

Vehicles have two different fuse locations. One is right in the engine compartment, while the second is underneath the steering wheel, next to the driver’s door. However, 30 amp fuses are usually in the engine bay. So, open the car hood and locate the fuse box. It is usually a black box close to the battery.

Step 2: Find and pull out the blown 30 amp fuse

Look at the diagram on the fuse cover to aid your search. Next, locate the blown 30 amperage fuse and pull it off. You can either pull the blown fuse with a pair of pliers or by hand. Depending on your vehicle, the fuse may have bolts on it. If that’s the case, depress the fuse to expose the bolt and take them off.

You want to make sure you’re replacing a blown fuse. This will make the work nice and smooth. First, you need to do a visual inspection. The difference between a blown fuse and a good one is clear. However, if you are not convinced about the visual inspection, you can check the fuse with a test light or a multimeter. Refer to the guide on how to test a blown 30 amperage fuse above.

Now that you have tracked the blown 30 amperage fuse, the next step is to replace it with a good one. So, clean the fuse sitting/port very well. You may have debris or burnt particles in the port, which could be what damaged the previous fuse. Once the port is nice and clean, get the new 30 amp fuse and snap it in the sitting.

Lastly, the replacement procedure is straight to the point. You can replace a blown 30 amperage fuse in 20 minutes. However, if you don’t have the confidence or trust your guts, let a certified mechanic do the job for you.