Does your car have a manual transmission? Then, you should know that the clutch is one component that works very hard with every start, stop and gear change. With such a tasking job, the clutch tends to wear out over time.

The clutch assembly is pretty crucial for every car, as it works well in connecting the engine to the transmission. However, there may be a sudden clutch failure due to some issues with the pressure plate.

In essence, the driver may face some difficulties in engaging or changing gears. The issues with the clutch pressure plate may occur due to broken springs, overheating, and even worn-out clutch disc. This article reveals some common symptoms of clutch plate problems and tips for increasing the clutch lifespan.

Various symptoms tell you that the clutch pressure plate is in bad shape. The good news is that these signs appear pretty visible, and you can take swift action before the car faces more problems.

Nevertheless, it would help to learn more about the role of the pressure plate. The clutch or pressure plate seems pretty beneficial in the manual transmission’s clutch assembly. It works with other components, including the clutch disc and flywheel.

In essence, the pressure plate alongside these other components in engaging the gears and keeps to the driving speed. Thus, the clutch plate is often under much friction and pressure with these activities. Soon, they may start wearing out.

Nevertheless, here are a few signs of a failing clutch pressure plate. 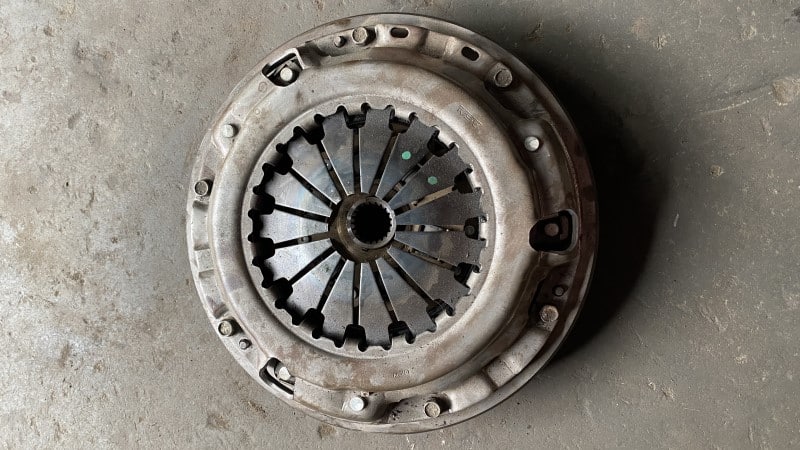 Difficulty in Engaging the Clutch Pedal

There is some amount of force needed to engage every clutch of various vehicles. This “input” would allow the car to completely depress and engage the pedal. However, drivers can do this effortlessly, as the force needed is not excessive.

Still, when you find yourself applying excessive pressure for the clutch to engage, you should know that there is a problem with its release mechanism. For most vehicles with mechanical systems, it would help if you check the pressure plate.

Aside from the pressure plate, this issue may arise when the clutch fork, cable, throw-out bearing, and linkage are in bad shape. Kindly note that a faulty cable, in this case, may cause the transmission to shift hard. If you work with hydraulic systems, you may need to check the seals for any blockage or wears.

Has the clutch pedal of your car been feeling loose? Then, there may be some faults in the mechanical unit’s diaphragm spring of the clutch spring. You can look through the clutch fork or release bearing to see if there are issues with these components.

For vehicles that work with the hydraulic release clutch mechanism, it would help if you look out for any leaky connections or pipes. Furthermore, checking the piston seal, fluid reservoir, and air in this hydraulic system would suffice.

There are lots of chances that cars with manual transmission expose drivers to what it’s like to start engaging gears. Nevertheless, there is a chance that slipping gears occur with the clutch pressure plate getting worn.

In most cases, you would start the car starts feeling like the engine is revving, and there would be an increase in “rpm.” So, it would appear too drastic for the gear shifting to happen. Hence, the car wouldn’t stall as it does on a normal day.

With the rotating components of the vehicle’s transmission vibrating and wobbling, you may notice the clutch pedal pulsating. You should try to check the pressure plate. Asides from that, there may be a need for an adjustment on the release lever or the wrapped flywheels has some issues.

Excessive heat is something that doesn’t work well for cars, as you must have noticed from engine overheating. The same applies to the clutch system, and such an issue is one of the causes of clutch failure.

When it overheats the various components get exposed to frequent wear. In essence, when trying to fix the clutch system overheating, you should check on the pressure plate. Greater chances exist that this part starts wearing out after being left exposed.

Noise from the Clutch Release

Ever wondered what causes that annoying sound that accompanies the clutch release? A faulty pressure plate could be the cause. When you place some pressure on the clutch pedal, you would start hearing a creaking sound if the pressure plate is in bad condition.

If this does not appear to be the case, then you should check the spring arrangement in the clutch system.

Vibration in the Transmission System

The clutch system of the vehicle would start vibrating if the car’s pressure plate seems loose or imbalanced. When you notice such, it would help if you take the car to an expert to get the problem fixed.

When the car starts making some chirping, grinding, and whirling sound when its transmission remains neutral, the shaft bearing may be worn. Often, the sound tends to go away with a “depress” on the clutch pedal. With such a sign, you can tell that a problem exists that needs a quick fix.

Tips for Increasing the Lifespan of the Clutch Pressure Plate

Although the clutch gets involved in much work for the manual transmission, it seems like one of the most sensitive parts of the vehicle. Again, the pressure plate is a crucial part of the system, and once it is in a bad condition other issues arise.

It is also true that it starts wearing out with constant use but proper care would ensure your clutch pressure plate lasts longer. Here are some helpful tips to prevent the occurrence of worn pressure plate fingers for a long period.

Why fix issues with the clutch? Well, smooth gear changing and engagement in manual vehicles can only be possible with a good clutch system. If there is any problem with the clutch of your vehicle, a quick fix would be needed.

Allowing the problem to linger on for too long can cause more problems to the other components of the transmission. You can check with the local service station near you for the clutch pressure plate price. Also, the labor cost for replacing the damaged parts with a new ones would vary. Nevertheless, they seem affordable and would prove beneficial for the car.

Q: How do you check a clutch pressure plate?

There is varying travel distance needed for the plate before it disengages. So, you can check with a car expert to know the right pressure plate travel distance of your car. Some persons find it pretty difficult in checking their vehicle’s clutch plate. Nevertheless, it seems simple if you follow the steps mentioned above.

Q: What happens when the clutch plate is damaged?

Ans: A damaged clutch plate would cause some difficulties when engaging the clutch pedal, and you may notice it feeling spongy or loose. Again, you may start noticing a grinding noise whenever you engage or even disengage the clutch. There is also this pulsation that results from the clutch pedal if the pressure plate seems damaged.

Various factors can cause serious damage to the clutch plate but one prominent issue is clutch overheating. When such occurs, the rest of the components, including the pressure plate are left bare. With that kind of exposure, they can start wearing out.

Q: What should one expect when driving with a faulty clutch

Ans: It seems pretty dangerous to drive a car that has a faulty clutch pressure plate. The threat seems great, leaving other road users at risk. Nevertheless, leaving the damage to linger for a long can cause some more issues for the clutch system.

If you still drive with such a problem in place, the steering gearbox would start getting damaged. With further damages, your car would not perform effectively. Then, fixing these problems would be more expensive.

Q: Should I replace the pressure plate alongside the clutch disc?

Aside from that, when applying pressure on the clutch pedal, the effort is felt on the pressure plate and the clutch disc. Such action would allow a better “shifting.” So, it would appear more reasonable to get both replaced simultaneously.

Q: How much does clutch pressure plate replacement cost?

Ans: The cost of making some repairs on the clutch ranges between 500 dollars to 2,500 dollars. The price varies based on some crucial factors like the vehicle’s performance. After noticing some signs of a bad clutch pressure plate, it would be best to replace it as soon as possible.

Nevertheless, you may end up replacing more than the pressure plate. In some cases, there may be a need to replace the clutch disc and friction plates. Such action would allow the car to perform optimally.

The maintenance of driving speed and gear engagements seems possible through the aid of the clutch pressure plate. This component works effectively with other parts of the car’s transmission to ensure that the car runs smoothly.