The DPF is designed as a support system for the emissions control operation in a diesel vehicle. However, the component comes with a couple of challenges, especially the poor airflow and reduced engine power that characterizes a clogged DPF filter.

DPF delete seems to be the sure way to eliminate a clogged diesel particulate filter, boost a vehicle’s horsepower, improve fuel economy, and enhance other aspects. However, several clauses accompany the Diesel Particulate Filter removal operation.

This article defines the meaning of DPF, its function in a vehicle, as well as the benefits and setbacks of eliminating the component from your diesel-powered vehicle. So, take a moment to digest the subsequent sections below. 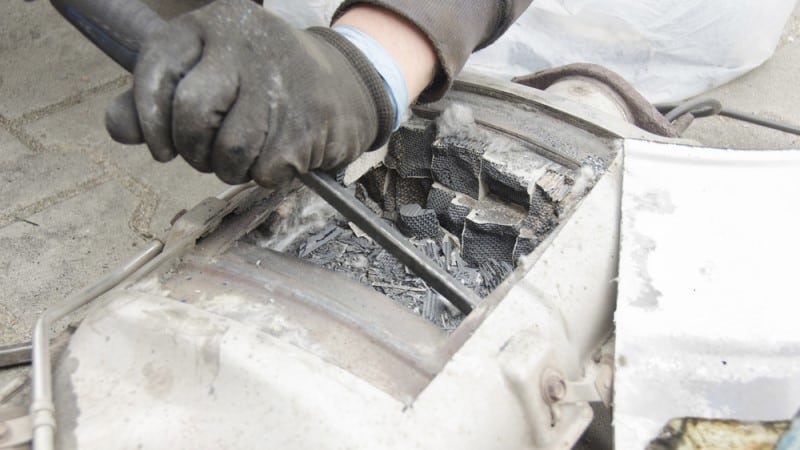 What is a DPF?

DPF is an acronym for Diesel Particulate Filter. It is an emission control system filter in diesel-powered vehicles that helps to capture and store exhaust soot, thereby reducing the rate of toxic emissions that go through the exhaust pipe into the air.

The DPF is an important part of the emissions control system in diesel engines. It is sometimes referred to as “soot traps.” The component plays a vital role in ensuring that the atmosphere is free from the toxic release that proceeds from a diesel vehicle’s exhaust pipe.

The diesel particulate filter (DPF) is usually made of silicon, ceramic, cordierite, or carbide. The component also has a layer of catalyst. The chemical catalyst has a little amount of palladium or platinum as part of its makeup.

The catalyst is responsible for oxidizing pollutants like Carbon Monoxide (CO) and Hydrocarbons (HCs) in order to purify the exhaust fumes before releasing the gas into the atmosphere.

However, the diesel particulate filter (DPF) is built with a limited capacity. In other words, it can become full. When this occurs, you better empty the trapped soot in the component or burn it off to regenerate the DPF.

Unfortunately, failure to get rid of the trapped soot can block the system and hinder the smooth release of the exhaust fumes from the vehicle’s engine.

This occurrence will eventually lead to several implications, including poor airflow, reduced fuel efficiency, poor overall engine power and performance, etc. This is a major reason why most people opt for a DPF delete.

What is DPF Delete?

A Diesel Particulate Filter (DPF) delete is the process of removing a vehicle’s DPF and resetting the computer system to operate without the component subsequently.

Removing the Diesel Particulate Filter is one way most diesel-powered vehicle owners overcome the stress of unclogging the filter regularly. Even though it is possible to clean the component with high-pressure compressed air, most people prefer to eliminate the DPF completely.

Since the presence of the DPF, especially when it is blocked with continuously trapped soot, hinders a car’s airflow, reduces fuel efficiency, and affects the engine’s power and performance, deleting the component is the “last card” for most people.

However, once the component is out of the way, the problems listed above will usually be eliminated alongside. This is why most people opt for DPF removal to boost horsepower, increase fuel efficiency, and so on.

However, removing your diesel-powered vehicle’s DPF comes with both benefits and drawbacks. Therefore, you may have to consider the implication before resolving to get rid of your diesel particulate filter (DPF) permanently. 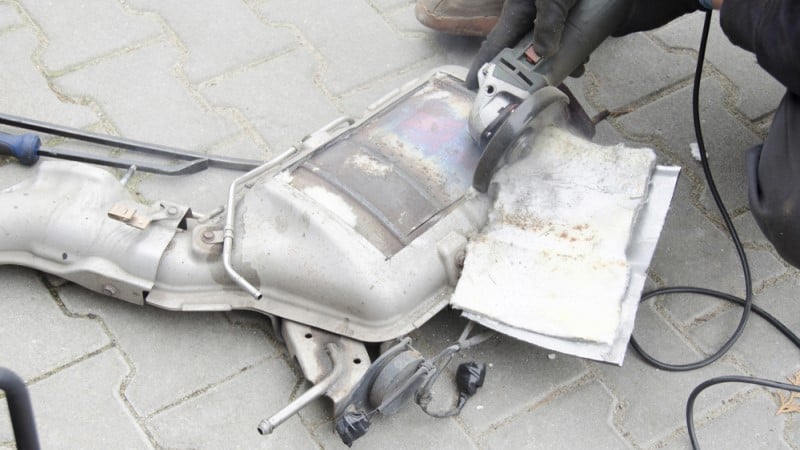 DPF delete comes with several advantages, hence the reason why most diesel-powered vehicle owners do not think twice before requesting for a DPF delete kit. However, eliminating the component is like having a two-sided coin with a tail and a head.

In other words, while you’re looking at the benefits of eliminating your DPF, also remember the accompanying problems after DPF removal. So, without further ado, the DPF delete pros and cons include the following.

A DPF delete is illegal because of the hazard the absence of the diesel particulate filter (DPF) causes to the atmosphere. In fact, most counties have stipulated specific amounts as fines for anyone who dares to violate the prohibition of removing their diesel-powered vehicle’s DPF.

However, some cities may permit the DPF removal, provided you’re replacing the component with a more effective emission control system kit that will cover up for the DPF removal. However, kindly note that you’ll be fined if you’re caught with DPF delete.

Considering whether eliminating a car’s DPF is a good idea or not depends on whether the DPF deletion is acceptable or prohibited in your location. However, eliminating the diesel particulate filter has numerous benefits, including improved horsepower, better fuel economy, etc.

However, the major drawback of DPF delete is the possibility of releasing toxic gaseous emissions into the atmosphere. This can pose a serious threat to the environment, especially to human health. In this case, removing DPF is a bad idea.

Q: Is DPF Delete worth it?

Of course, DPF delete is worth it with respect to the advantages of eliminating the component from a vehicle. For example, removing the diesel particulate filter will result in better airflow, improved gas mileage, less DPF maintenance cost, increased engine power, better acceleration, etc.

Nevertheless, the advantages above do not cover up the fact that you may be fined thousands of dollars for removing your vehicle’s diesel particulate filter (DPF), especially in the United States of America.

Q: What happens if I remove my DPF filter?

Eliminating the diesel particulate filter (DPF) will hinder the engine control unit (ECU) from receiving the correct sensor signal with respect to maximum and minimum allowable back pressures.

When this happens, the system will trigger an error code, and the vehicle will most likely move into limp mode. However, DPF removal comes with several benefits. Nevertheless, it is vital to consider the pros and cons before opting for the elimination.

Q: How much does a DPF Delete cost?

A complete DPF delete costs around $3,000 – $10,000. However, the estimated cost depends on the vehicle’s make, model, and year. The location of the auto technician or DPF delete shop you’re contacting for the job is another factor to consider.

However, considering the numerous benefits of eliminating the diesel particulate filter, most diesel-powered vehicle owners wouldn’t mind. Nonetheless, ensure to find out whether the DPF removal is permissible in your location before you go ahead.

Q: Can I delete DPF without removing DPF?

Diesel Particulate Filter elimination requires a DPF delete software and removing the DPF component from the exhaust system. Unfortunately, it is pretty difficult to perform a DPF delete without removing DPF, except you’re a tech professional in handling ECU reprogramming.

That’s why DPF removal is mostly recommended to be handled by an expert auto mechanic because of the technicality. However, a DIYer can also attempt a DPF removal if you understand how to perform the operation. Otherwise, it should be reserved for professionals.

Yes! The presence of the diesel particulate filter (DPF) helps to minimize a vehicle’s noise. In other words, deleting the component will automatically trigger the noise beyond the normal experience while the DPF is on.

Inasmuch as diesel particulate filter removal is advantageous, ensure to consider the flip side of the coin before resolving to get rid of the component. Otherwise, the after-effect may not be as expected, especially if you live in a very strict city.

Of course! DPF removal is one powerful strategy that helps increase a vehicle’s fuel mileage. Besides the improved fuel economy, the engine gets a horsepower boost up to +10%. This further results in better acceleration, improved throttle response, etc.

So, if you drive a diesel vehicle and you need an improvement in your fuel consumption rate, removing the diesel particulate filter is a sure way to get a better fuel economy. However, ensure to find out if this approach is approved by law in your location.

Q: Can a car run without a DPF?

Although a car can run without a DPF, it is not advisable to eliminate the component because of the hazardous toxic gaseous emissions caused by the exhaust system. The absence of the diesel particulate filter has nothing to do with locomotion. In fact, the removal can boost HP.

However, your car may not be able to pass the MOT emissions test afterward. Also, kindly note that EGR and DPF delete exposes you to the risk of being slammed with a fine of thousands of dollars if you’re caught driving without the component.

Undoubtedly, the DPF delete provides several mouth-watering advantages to a diesel vehicle owner. Unfortunately, every coin has two sides. Eliminating the component comes with a couple of limitations simultaneously.

Therefore, if you’re considering deleting your car’s diesel particulate filter (DPF), ensure to carefully weigh the pros against the cons outlined above before arriving at a conclusion.

Otherwise, consult a professional auto technician and the designated Environmental Protection Agency in your location to find out whether the operation is legal or not. This will help you avert any penalties that follow the violation of the emissions control regulations.