Many homeowners have little or no information about the AC system in their house. You may have heard about refrigerants and Freon, but you got confused about what they are used for.

Here, we got you! In this article, we’ll be giving a detailed freon vs. refrigerant argument.

Freon is a trademark registered in the Chemours Company, which uses it in producing some of its halocarbon products. Freon is a non-flammable, stable, and non-toxic liquid or gas used as an aerosol propellant and as a refrigerant. It includes chlorofluorocarbons (CFCs), which cause HCFs (like chlorodifluoromethane) and ozone depletion. The smell Freon emits is similar to acetone, an ingredient used in nail polish removers. 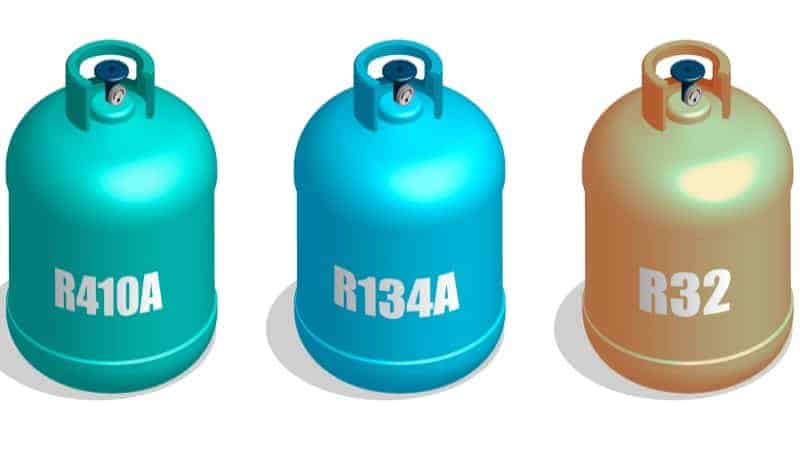 Even though Freon is a brand name for refrigerants, not all liquids labeled as “Freon” are refrigerants. Freon refrigerants include; R13B1, R503, R12, R22, R502, R410a, and they are all produced by the Chemours Company.

It is a gas at atmospheric pressure, but when used, is compressed to liquid form where it is pumped through a fridge circuit to allow it to contract. And expand each time the latent heat transfer makes the cycle to either heat or cool at the expense of driving a compressor electrically.

Freon is a non-combustible gas used as a refrigerant in AC systems. To produce cool air that’ll circulate throughout the air conditioner, Freon repeatedly undergoes evaporation.

Freon is available in several applications, with some being sold at a high cost because of its unavailability. So, when someone says an air conditioning system needs to be refilled or recharged, the person is referring to the Freon levels.

Most liquids containing chlorofluorocarbons have been banned, and some restricted since August 1987 by the Montreal Protocol because of their harsh effect on the ozone layer.

As a result, Freon brands containing this chemical (chlorofluorocarbons) have been replaced, while the Kyoto Protocol is strictly controlling some since they’re being referred to as super greenhouse effect gases.

Asides from air conditioning applications, Freon is also used in tight freezers. In addition, many industrial and commercial appliances use Freon in both cold storage warehouses and food transportation. Dehumidifiers, too, use R22 (Freon).

Look at the nameplate to identify the coolant used in your air conditioning system. You’ll find other details about the unit on the nameplate, including electrical ratings and safety certifications.

Sometimes, you’ll find the information on the outdoor condenser unit. If you don’t, reach out to the manufacturer for more information.

In addition, using freon for car AC has no side effects. It’ll function properly.

What is a Refrigerant?

Refrigerant is a fluid (or gas) used in the refrigeration cycle of heat pumps and AC systems. Most times, they pass through a repeated transition from liquid form to gas and back to liquid.

In addition, refrigerants absorb heat from the environment and provide air conditioning or refrigeration when added to other components like evaporators and compressors. 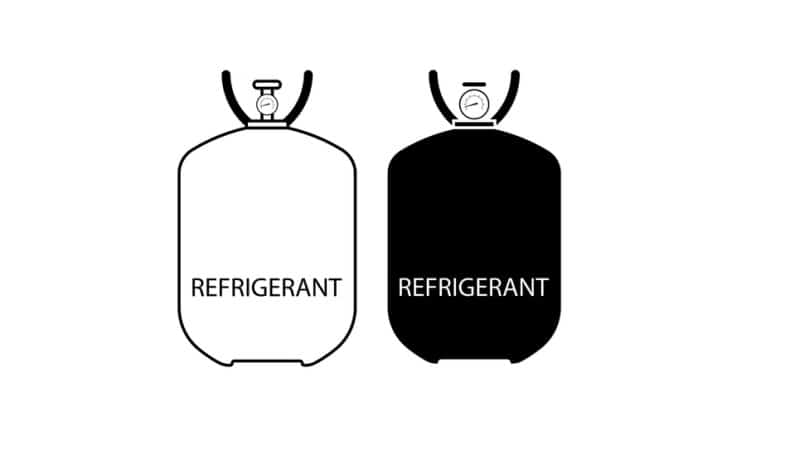 The most commonly used refrigerants types for air conditioning systems include:

Chlorofluorocarbons (such as R12)

R12 contributed to the greenhouse gas effect and was phased out in 1994.

Hydrochlorofluorocarbons (such as R22)

R22 caused damage to the earth’s ozone layer and was completely banned in 2020 after the EPA instructed a phase-out with the Clean Air Act of 2010.

These refrigerants have no chlorine and are safer for the environment. In addition, AC systems that run on R410A are more reliable, efficient, and of better air quality.

R717 is mostly found in industrial cooling systems, with a boiling point of -33° Celsius, enabling temperatures below zero at atmospheric pressure. Comparing ammonia refrigerant vs. freon will give you an understanding as to why you should use R717 instead of R12.

Freon vs. Refrigerant: What Are The Differences?

Freon and refrigerants have more similarities than differences. However, here are the 3 major differences: 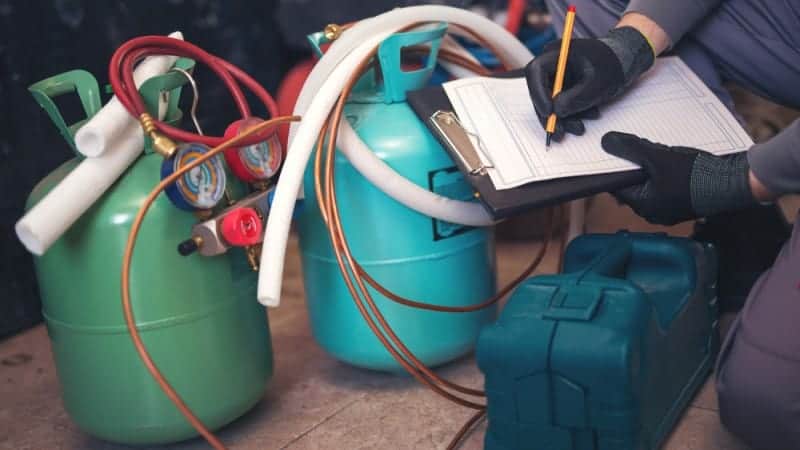 The main difference between these two refrigerants is that Freon is a trade (market) name that refers to halocarbon products that cause the depletion of the ozone layer. In short, Freon is a collective name for refrigerants classified as fluorochlorocarbons.

On the other hand, refrigerant refers to a chemical used in a refrigeration cycle.

Most Freon compounds are used as aerosol propellants, whereas refrigerants are compounds used specifically for the refrigerator cycle and heat pump in refrigerator and AC systems.

Freon has adverse environmental effects and will soon be banned, unlike refrigerant which is highly effective, non-toxic, and non-flammable.

Q: Are Freon and Refrigerant the Same?

Not exactly. Freon is a trademark registered under the Chemours Chemical Company used to refer to chemical products classified as halocarbons and used majorly as aerosol propellants and refrigerants. Therefore, a refrigerant that is not a halocarbon can’t be referred to as “Freon.”

On the other hand, refrigerant is the generic term for all working fluids used in a refrigeration cycle like in refrigeration and air conditioning systems. Therefore, asides from ammonia, NH4, hydrofluorocarbons, carbon dioxide, chlorofluorocarbons, organics (such as butane, water, propane), and any other liquefied gas can be classified as refrigerants.

In addition, when comparing freon vs. coolant, the most important thing to note is that Freon is a chemical used in the cooling system of ACs. Plus, there’s no much difference when comparing refrigerant oil vs. freon.

Q: Is Freon Still Used as a Refrigerant?

Freon is no longer used as a refrigerant. This halt of usage is due to the harm Freon causes to the upper atmosphere. As a result, many (like R12) have been banned, while others (such as R22) have been phased out. Freon replacement includes better refrigerants like R410a.

Instead of using Freon in your AC at your home, go for a good refrigerant. If you’re not sure whether your air conditioning system runs using Freon, contact the manufacturer for more information, so you don’t end up damaging the AC unit.

Q: Why is a refrigerant called Freon?

Refrigerant is called Freon because it is a fluid used for cooling air conditioning applications. However, it is important to note that not all refrigerants are called “Freon.”

The refrigerants called Freon are the halocarbon products like R12, R22, and other greenhouse gases. Most of them have been banned due to their effects on the earth’s ozone layer and global warming. In addition, they are less efficient, toxic, and highly flammable. So, if you’ve been asking – is Freon still used? The answer is yes but they’re no longer in production.

Q: Why is Freon Banned?

Freon was banned by the Environmental Protection Agency in 2010 for use in new applications because of its severe depletion of the earth’s ozone layer. Freon has caused more harm than good to the earth by releasing gases that trigger health hazards and cause air pollution.

Also, it was added to the list of greenhouse gases because of its contribution to global warming. Freon is not the best refrigerant for your air conditioner; avoid using it. However, the Freon AutoZone has some advantages.

Q: How Bad is Freon?

It’s not out of place to say that Freon is very bad. However, the good news is that there are just two circumstances under which coming in contact with Freon may lead to serious problems. They include:

Always be careful when handling Freon. Make sure to put it away immediately after use.

Yes, it’s possible to put Freon in your home AC units yourself. However, you’ll need to have some general knowledge about air conditioning systems and some tools to add the Freon to the AC correctly.

If you’re pretty sure you can handle it, make sure the inner part of the AC is clean before adding the Freon. Adhering to the instructions on the user guide attached to the product will help you throughout the process. Follow this guide to properly recharge your AC system.

Q: How Long Can Freon Last?

Freon lasts for a whole lifetime. It’s not like the gas used in cars that could finish anytime. Also, the refrigerant system of an air conditioner is a closed system, implying that it doesn’t allow the escape of the refrigerant.

If you ever find out that your AC unit is out of refrigerant, then the refrigerant system must be leaking. So, if you top up the refrigerant without fixing the leakage, you’ll be wasting your money and time.

R22 is a Freon. It is a chemical used in the cooling system of commercial and household air conditioners. However, it was phased out because it was a harmful chemical contributing to ozone layer depletion.

Since R22 has been banned, air conditioning units that are up to 10 years old will only run with recycled R22 because there are no more supplies of R22. Plus, the available few are sold at a very high cost. In situations like this, you should come out with an alternative and so compare freon vs. coolant car.

In sum, Freon is a trade name for halocarbon products, while the refrigerant is the name of a group of compounds used in refrigeration and heat pump cycles. We’ve taken time to compile more differences on Freon vs. refrigerant. Carefully read through to have an idea of the best cooling chemical to use for your air conditioning unit.