Headlights are crucial car lights, playing a significant role in visualization in dark conditions. Over the years, there have been improvements in headlight technology for comfortable driving in the dark. HID and LED headlights are some of the innovations gracing the automotive world. Onto our main topic, HID vs. LED headlights, which one is the best?

The lights, most of which are common on luxury vehicles and newer models, outperform existing technology, like halogen lamps. If you want to upgrade your headlights to either HID or LED, you are in the right place as we give you the information you need about them.

What Are HID Headlights? 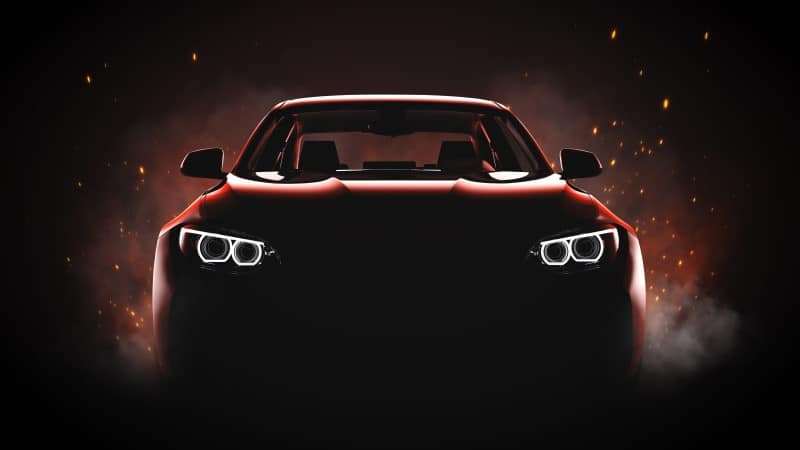 HID in full is a high-intensity discharge. They also go by xenon HID lights as they use this rare gas to produce light. This type of light consists of two electrodes in a vacuum chamber filled with xenon. Electric current passing through the two electrodes leads to the reaction of the gas and halide salts. Ionization of the rare gas maintains the current flow.

The emitted light is bright, with a whitish-bluish appearance, almost similar to natural light. The bright light can be relatively unbearable to some drivers. You need to tone the light down to avoid blinding other road users as it can cause accidents.

What of the legality of HID headlights? They are legal in most states in the US. However, in California, the laws are pretty prohibitive, as they allow for white or yellow light emission. As such, you should use low-intensity HID headlights, which emit white light.

Additionally, this type of light lasts very long, with a lifeline of up to 3000-hours. If you frequently drive at night or in dark conditions, HID lights are ideal. The other reason for their hiked popularity is that they enhance the vehicle’s appearance. You will notice that many luxury vehicles have HID headlights that do justice to their aesthetic appeal.

HIDs also need low power to sustain them. You have the assurance that if you leave them on, there are minimal chances of your battery dying. You can fit the lights on most new vehicle models. For those that are incompatible with the lights, a HID light conversion kit will have your back.

A look at the pros of HID headlights shows you how reliable they are. First of all, they are very bright and will give you sufficient illumination when driving in the dark. Also, it has a striking look and will make the car stand out.

The other impressive thing about HID kits is that they require less power. They are long-lasting, with a lifeline of up to 3000-hours.

A major downside of HID headlights is their cost, which is pretty steep. Their brightness, while an advantage, it may cause blinding to other road users.

What Are LED Headlights? 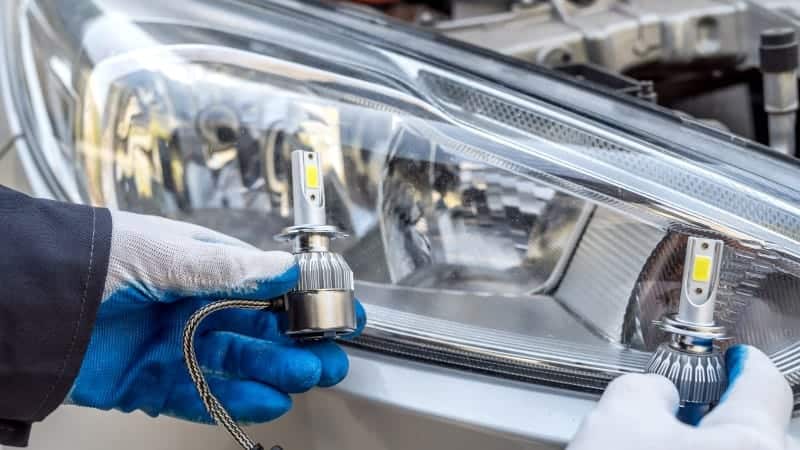 LED headlights match the popularity of HIDs, their brightness being a crucial factor. Their operation relies on current transfer via a semi-conductor. It leads to the emission of photons, which bring about light, a process known as electroluminescence. Similar to HID headlights, you will spot them on most luxury vehicles.

The other appealing factor for LED headlights is their longevity. They have an impressive lifeline of up to 30000-hours. The best-LED headlights kit can last for 40000-hours. It means you can have them for a considerable time before thinking about a replacement. Their brightness can be a problem to other road users; thus, you need to regulate their brightness.

In states like California, you can only use two light colors, yellow and white. LEDs have four colors, which are yellow, white, blue, and purple. If blue or purple, you may find yourself on the wrong side of the law.

Still, on the legality of LED headlights, it is illegal to use them on cars that originally use halogen lamps. This is due to the reflective nature of the halogen light housing, which can blind other drivers and people using the road. There is also the issue with angling when you fix LED lights on the halogen lamp compartment.

You need an LED headlight conversion kit when installing them on cars that originally had different headlight types. A point to note about this kind of headlight lit is that they make the surroundings hot, though they remain cool. In this vein, you need a cooler to maintain low temperatures. The conversion kits come with the cooler.

LED lights won’t disappoint you when it comes to brightness. When driving in the dark, the lights will give sufficient illumination. They are very durable and last between 30000 to 40000-hours depending on the model you get. You can improve your car’s look, giving it a sporty edge, by installing LED lights.

Some of the problems you will encounter with LED headlights are excessive heat production and blinding light. With the right conversion kit, you can deal with these issues. Moreover, the lights are quite pricey. The good thing is that you get a good value on your spending.

Looking at the HID vs. LED headlights pros and cons, you see that they share several similarities. Despite their likeness, they differ in many areas, like mode of operation. HID lights work courtesy of an electric current passing between two electrodes in a xenon-filled chamber. Ionization of the gas maintains the current and brings the light. On the other hand, LED lights produce light via electric current movement on a semi-conductor, leading to the emission of photons.

When looking at the HID vs. LED distance debate, you realize that the former covers a larger area, with some pundits saying a third more than the latter. The two lights also differ in brightness levels. While both are bright than standard lamps, HIDs have a larger area coverage. In addition, HID lights support many colors, seven to be precise. LED lights support four.

Q: Is It Illegal To Install HID Headlights?

HID headlights are standard in most vehicles, primarily new and luxury models. Generally, they are not illegal unless you exceed the recommended limit of 6000k, which is bright light. Past the value, the color will be blue. Bright white and blue can cause blindness to oncoming traffic. In states like California, you should use low-intensity HID headlights.

In most states, your headlight should not go past 5000k in color temperature. At this point, the light is bearable to other users, with low chances of blinding. 8000K is on the higher side, with the color being blue. This can cause blinding to opposing traffic, affecting visualization.

The line between the legality and illegality of blue LED headlights is very thin. On one hand, they are legal for vehicles that had the lights fitted at the assembly line. However, they are illegal if they are a form of modification. States like California have strict laws on the use of blue lights, as they can distract other motorists.

Q: Can I Replace Halogen Headlights With LED?

LED lights have several advantages over halogen headlights. They last long, are brighter, plus boost the vehicle’s aesthetic appeal. You can replace halogen lights with LEDs to enjoy their perks. However, there are several downsides, like expenses and heat production. Moreover, the conversion may be illegal in some states.

Q: What Headlights’ Colors Are Illegal?

When getting headlights, you have to be keen on the colors. Numbers represent the various colors. For instance, yellow, common in halogen headlights, have a value below 4300k. From 4300k to 5000k, you have pure white and bright white above 5000k. Past 6000k, the color is blue, and as the value increases, you will have other shades like purple. Blue and higher-value colors are illegal in some states, as they can cause visual problems to traffic from the opposing side.

LED vs. HID headlights, which is the best? This piece brings you closer to the answer. You should now know the differences between the two types of headlights and their respective advantages and disadvantages. Pick a preferable one for your car, but be sure that it is legal in your state or country.