Looking at car batteries and their small sizes from afar, you can’t know that they weigh so much until you have to lift one. Realizing how heavy it is, people wonder how much does a car battery weigh anyway? And does the weight matter?

How Much Does a Car Battery Weight?

Car batteries are essential in every car, and their weight matters if you want your car to function at its best because a wrong battery size in your car will reduce its performance due to inadequate power supply to the car.

The weight of car batteries differs based on their size, type, brand, and other factors. For instance, we have mentioned that batteries weigh between 40 and 60 pounds, but tesla’s car battery weight is far more as it weighs up to 1,200 pounds.

When you need to change your car’s battery, you’ll see several batteries with differing weights, and the proper knowledge about battery weight is necessary for you to make the right choice. 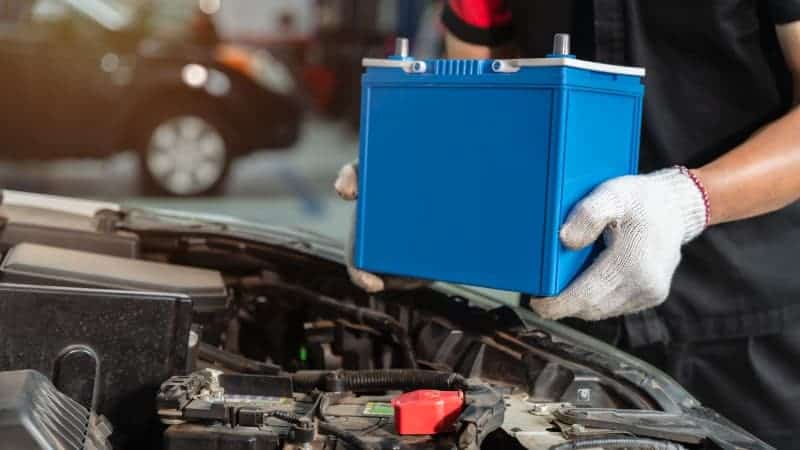 How to Know What a Car Battery Weigh

The easiest way to know the weight of a car battery is to check the packaging or the label as it’s usually written there. So, looking closely at the label will give you a quick response to the battery’s weight and let you know what to expect.

But some batteries don’t have their weight written on them so, you’ll have to find their weight through further information. Usually, it is a battery’s content that determines its weight and not its body. So, the weight of a lead-acid battery can reduce significantly if its fluid is exhausted.

So, in such a situation where the fluid is depleted, a lead-acid battery that weighs 40 pounds can reduce to 15 pounds. Therefore, look out for the content of a battery to ensure that it’s lightweight doesn’t mean it’s empty.

Some of the factors contributing to the weight of a car battery include the battery’s size and type.

The battery size is an essential factor that determines its weight. Size is also what affects an electric car battery weight. A battery that has more constituents will be bigger and therefore weigh more than the smaller one.

Bigger batteries are usually used for cars that need extra power to function well because they have bigger engines. If you have such a car, your battery will be bigger and heavier as it’ll weigh more than 40 pounds.

There are different types of battery weight, and knowing them will help you determine the correct weight of a car battery. They include:

When heavy or standard battery models are empty, they weigh about 15 pounds, while empty lightweight battery types weigh about 7 pounds.

It is clear that battery types will affect the battery’s weight. Amaron car battery weight is about 19.84 pounds making it light and a good choice for those that want such lightweight batteries.

However, remember that lightweight batteries are not the best if your car requires more power to function well. Always take some time to know the battery weight your car needs for maximum function before choosing one. 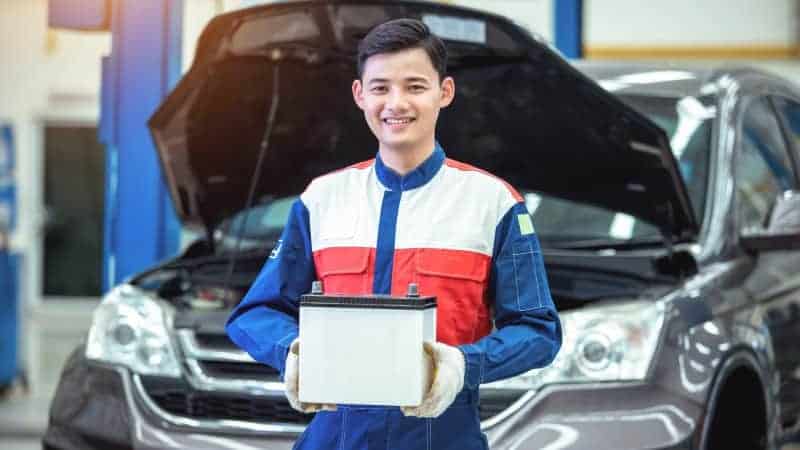 Q: How much does a 12V battery weigh?

The battery model goes a long way to determine a 12V battery weight as it varies by model. However, you’ll usually find 12V batteries weigh between 30 to 60 pounds. The weight may also vary based on their age, size, and BCI group.

Q: Why is a car battery so heavy?

A car battery is usually heavy because of its size and the type of car engine where you place it. A battery with more internal content is larger, has a better capability, and is consequently very heavy when you lift it. Batteries for heavy-duty vehicles are also heavier than others.

Q: How much does a 6V battery weigh?

The weight of a 6V battery is determined by the model and size of the battery. Its weight can be around 13 pounds or between 58 to 104 lbs. For instance, a Trojan T-605 6V battery weighs 58lbs while the Trojan L16G-AC weighs 104lbs.

Q: How much does a 16V battery weigh?

For a 16V battery, it is a case of “bigger is better,” as many individuals love the result they get when using this battery for their car engine. 16V batteries usually weigh around 42 pounds with a cold cranking amp of 550.

Q: How many car batteries are in a ton?

Q: How much does an 8V battery weigh?

Yes, car batteries usually have scrap value, but this value depends mainly on the batter’s lead content and the battery type. The average value varies, but it is estimated at 0.21 to 0.41 cents for a pound.

That means the scrap value of a 30 to 50 pounds battery will be between $6-$20. Though, it is best to contact a local scrap yard as they’ll be in the best position to determine your battery’s scrap value.

Q: Why does a car battery go flat if it is not used often?

How much does a car battery weigh? Different car batteries have different weights. Knowing what various batteries weigh, it is best to find the right battery weight for your car because the wrong one will negatively affect your car’s performance.