Have you watched any YouTube video or read any post on social media saying putting lacquer thinner in gas tank will fix error code P0420 issues or clean a clogged catalyst converter? If yes, you may wonder why people add lacquer thinner in the gas tank to clean catalytic converters.

Most folks believe adding lacquer thinner to the gas tank will clean a clogged catalytic converter. While this is true, it comes with pros and cons. Here, you’ll see if you can use lacquer thinner in a car and what happens when you pour it into your gas tank. But first, what is lacquer thinner, anyway? 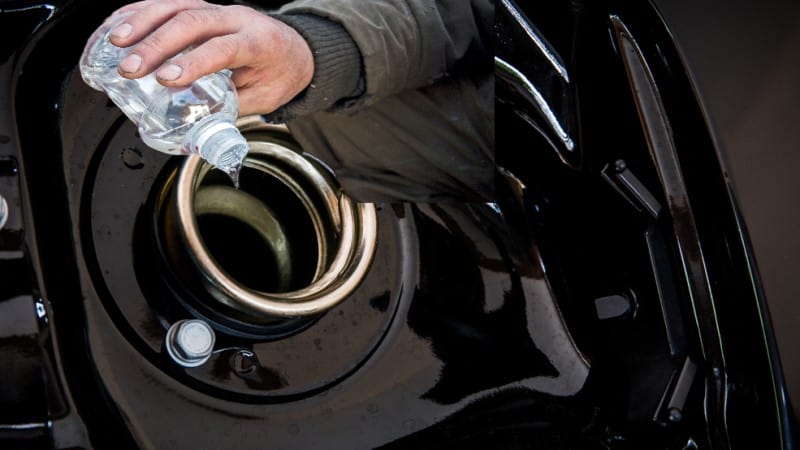 Lacquer thinner is a mixture of solvents used in the painting or decorative world. It is a strong solvent that can dissolve different plastics or resins. It is also a highly flammable chemical that emits a strong odor with harmful fumes. It contains acetone, toluene, xylene, methyl ethyl ketone, and butyle acetate, which makes it highly corrosive.

As explained, it is a solvent used for cleaning painting equipment like spray guns. Lacquer thinner is mainly produced for thinning, dissolving, and cleaning lacquer-based products. It enhances lacquer’s leveling and flow, producing a streak-free, smooth, and high gloss finish.

Aside from lacquer-based products, lacquer thinner is used for cleaning ink and stubborn residues on any surface. It is good at cleaning, thinning, dissolving; and it evaporates quickly.

Read Also: Can You Put WD40 in Gas Tank

Can You Put Lacquer Thinner in a Gas Tank?

Already mentioned, lacquer thinner dissolves and cleans lacquer-based products on top of thinning them. However, it can also clean stubborn residues on any surface. So, if you’re asking, can I pour lacquer thinner into my gas tank to clean the catalytic converter? The answer is yes.

Pouring lacquer thinner in a gas tank can clean any stubborn residues in the catalytic converter and the exhaust system. However, you need to take precautionary measures. Doing it not in a proper way may come with grievous consequences.

If you suspect a clogged catalytic converter, you can pour lacquer thinner in the correct quantity to unclog it.

The symptoms of a clogged catalytic converter that show something is wrong with the cat con include the smell of a rotten egg from the exhaust, slow acceleration, dark exhaust smoke, slow powertrain performance, and increased engine temperature. Another common sign is a blinking engine warning light on the dash.

If you notice two or more of these symptoms, you can pour in lacquer thinner to clean it instead of replacing or deleting the catalytic converter. However, you need to follow the right guide. All you have to do is, get a half tank of gasoline and pour a gallon of lacquer thinner into the fuel tank. If you ask how much lacquer thinner to pour into the gas tank, do not add more than 1 gallon.

Run the vehicle for 150 miles or unless you have low gas. The thinner will clean the clogged catalytic converter and other stubborn substances in the exhaust system. That little monster light on the dashboard will disappear, and you won’t notice the other symptoms. 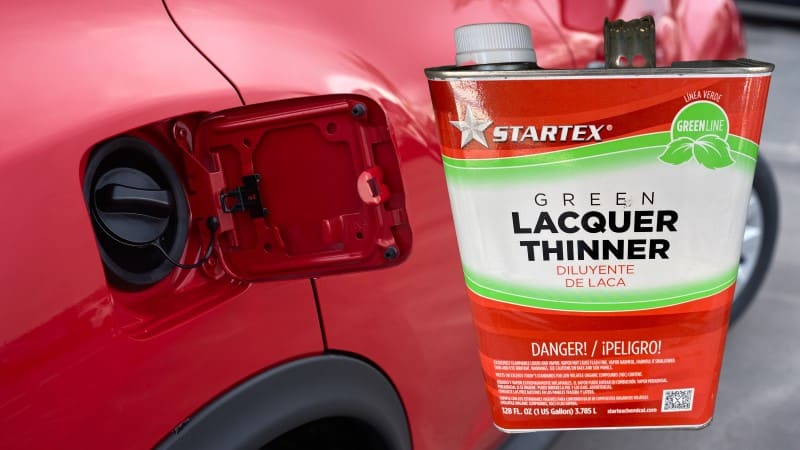 What happens if you put lacquer thinner in the gas tank?

Putting excessive lacquer thinner to clean fuel injectors and catalytic converters is a threat to the overall fuel delivery system. It can cause damage to the engine and the components inside the gas tank.

This is because manufacturers use plastic components and rubber seals in the fuel systems. Since lacquer thinner is corrosive, it can easily corrode the fuel pump, wiring harness, and fuel filters. It can also melt the glue holding some of the system components.

Since lacquer thinner is a good cleaning solvent, it can clean the gas tank, leaving the residues to clog the fuel filter, injectors, or other crucial engine components and reduce overall engine performance.

How do you use lacquer thinner on a car?

If you watch mechanical repairs, hacks, and tricks on youtube, there’s a chance you have stumbled upon Scotty Kilmer’s Youtube channel. In one of his videos, he explained how to use pure lacquer thinner in a gas tank.

According to him, you have to pour a gallon of lacquer thinner into a half tank of petrol and run the vehicle for 150 miles at highway speeds. And he said if the car stays with him, he will switch on his big fan and face it towards the car radiator. Then turn on the car and run it at 25 RPM for 30 minutes. I tried the tricks in my garage. But since I don’t have a big fan, I drove the vehicle for 150 miles at highway speed. In the end, the check light was still on, and the vehicle was running fine with a funny exhaust smell. I scanned the vehicle with a diagnostic scan tool, and the cat con error code P0420 and P0430 were still there.

I erased the code and drove the vehicle for a few more miles. After that, I refilled the gas tank with gasoline, and the code and light never reappeared. That proves that Scotty Kilmer’s hack works.

Though, I didn’t notice any damage to the fuel system in the short or long term. So, if you are wondering, is it safe to put lacquer thinner in the gas tank? The answer is yes. However, you have to follow the above steps if you want the same or similar result. In my case, there were no damage to the plastic and rubber seals in the fuel delivery system.

The direct answer is yes. Lacquer thinner in the gas tank can clean and eliminate stubborn substances in the catalytic converter. However, you have to follow the instructions above when pouring lacquer thinner gas tank. Pouring it excessively will increase the chances of damaging plastic and rubber seals in the fuel delivery system.

Q: Is lacquer thinner good for your car?

Lacquer thinner can damage rubber seals and plastic components in fuel delivery systems. Therefore, you should not always run with it. Instead, you can only use it when you have a clogged catalytic converter. Even at that, do not pour it excessively. You should only pour in one gallon in a half tank of gasoline.

Q: Will a gas engine run on paint thinner?

Project farm has proven that a gas engine can run on paint thinner. However, he demonstrated this using a carburetor engine. Newer vehicles now use fuel injectors. I don’t know if it will cause any catastrophe on newer engines. So, it’s essential to stay away from it unless you want to use your engine for an experiment.

Q: What is a Substitute for Lacquer Thinner?

This depends on the job you are doing. If you’re spray painting, mineral spirits, acetone, or paint thinner is a perfect substitute for lacquer thinner. They are good products for thinning spray paints. On the other hand, if you’re looking for a solvent to unclog your catalytic converter, cataclean is the right alternative.

Q: What happens if you put acetone in your gas tank?

Do not put acetone in your gas tank because it can be unpredictable. Some folks bets that it damages the rubber fuel delivery components like gaskets and O-rings, while others say it is abrasive and evaporates more quickly. While all these are true to an extent, you need to understand that putting acetone in your gas tank will reduce the lubricating properties of gasoline. As a result, it can damage the rubber components in your car.

Q: Can I use thinner as fuel?

No, you can’t use only thinner instead of petrol. Using only thinner in place of gasoline will cause catastrophe to the plastic and rubber components in the fuel delivery system. Aside from this, it can even blow your engine. Therefore, you should refrain from using only fuel in gasoline. Also, do not use thinner in gasoline regularly.

Putting lacquer thinner in gas tank to clean the catalytic converter is quite effective. However, you don’t have to pour more than 1 gallon in a half tank of gasoline. And when doing so, follow the directives above. In all you do, do not add lacquer thinner in engine oil because it’ll cause more harm than good.