GM engines are quite difficult to differentiate from their exterior features. That’s why looking beyond the surface is very important in this case. So, follow this article carefully as we attempt to unravel the differences between the LQ9 and LQ4.

An LQ9 engine is a 3rd generation 6.0L small-block engine built after its LQ4 counterpart in 2002. The engine was specifically designed for General Motors’ trucks, and it played a great role in powering the trucks that were manufactured to run on the LQ9 between 2002 and 2007.

The LQ9 was famously referred to as “VortecMax or Vortec HO 6000.” The engine had the VIN 8th digit code – “N” on it as a major mark of variation from the old LQ4. This engine powered a host of GM pickup trucks at the time.

An LQ4 engine is also a 3rd generation 6.0L small-block engine from the LS family. It was released in 1999 and powered GM trucks from that time till 2007. This engine was popularly referred to as “Vortec 6000.”

The LQ4 preceded the LQ9 among several GM 3rd generation engines. It had a relatively lower horsepower and torque output, as well as its compression ratio compared to the LQ9. Nevertheless, the power rating still managed to stay within the recommended ideal horsepower level.

With an ideal horsepower level of 200 – 300 HP for pickup trucks, the LQ4 had up to 330 horsepower output. The engine also had a VIN 8th digit code tagged “U” among the several other LQ4 specs.

If you drive a GM truck powered by the LQ4, this code can be spotted on the Vehicle Identification Number (VIN) on the sticker attached to the door frame at the driver’s side.

Although the LQ9 was designed in the similitude of its older brother – the LQ4, they still had some discrepancies.

The LQ9 and LQ4 were designed with the capacity to accommodate power boost up to over 1,000 horsepower. However, this can only be achieved through an upgrade that requires more superior components, including the cold air intake system, aftermarket exhaust, etc.

Typically, more turbo boost will result in greater engine power. Meanwhile, a turbocharger boost not only improves the horsepower but also results in a leap in the torque output level.

Most of the trucks that the LQ9 and LQ4 came in had mechanical fans, which meant a power drain for the engines. Swapping the LQ9 Vs. LQ4 for boost may require an electric fan aftermarket kit to automatically free the engine from such power sap. 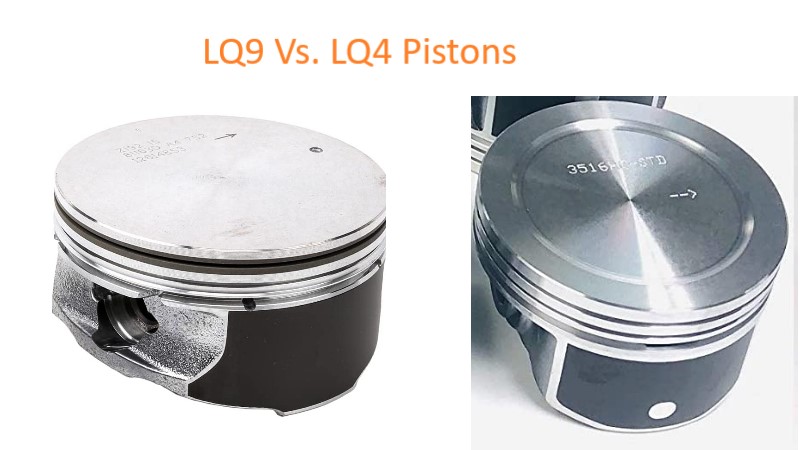 The pistons are the major components that differentiate the LQ4 from the LQ9. The LQ4 piston design is dished, offering a relatively lower compression ratio, power, and torque output than its LQ9 counterpart.

Meanwhile, the LQ9 piston had a flat top design, offering a superior compression ratio up to 10:1 and an improved horsepower output up to 345 HP.

Typically, although the LQ9 and LQ4 engines had the capacity to accommodate a power boost, the pistons place the LQ9 at an advantage over the LQ4 at their base levels.

The LQ9 and LQ4 boost can be triggered to deliver more horsepower and torque, as we improved fuel economy with a dynamometer (a.k.a Dyno). A plug-and-play dyno tuner can set everything in motion in a moment.

A dyno tune will boost the LQ4 and LQ9 performance ability, delivering up to 10 – 15 horsepower. However, the LQ9 will certainly provide more power output, up to 15 – 20 horsepower, when optimized compared to the LQ4.

The LQ9 and LQ4 engines had small blocks, with the LQ9 delivering high output. This external feature didn’t come with any significant difference between the two engines.

Although the LQ9 engine specs and the LQ4 come with several similarities, the LQ9 is built with stronger rods. The rods have the capacity to bend and retain their original state instead of breaking.

While the LQ4 comes with weaker rods and a piston setup with a pressed pin, the 123/145 casting on the LQ9 rod is designed with a relatively stronger big-end and thicker beam.

LQ4 and LQ9 heads are the same. However, the distinct pistons cause the main difference between these two V8 engines. While the LQ4 is designed with unique dished pistons, the LQ9 is equipped with awesome flat-top pistons.

Basically, the difference in piston designs provided the LQ9 with more horsepower and torque output as well as an improved compression ratio. It is obvious that the LQ9 was built to a more sophisticated standard than its LQ4 counterpart.

Q: What vehicle did the LQ9 come in?

The engine was popularly known as VortecMax or Vortec HO 6000. It was one of GM’s powerful V8 engines at the time, especially due to its upgraded horsepower, torque, and compression ratio.

However, the LQ9 was designed to offer a superior horsepower output than its LQ4 brother. This is due to the kind of pistons at work in the LQ9.

The components made a whole lot of difference between the 1999 LQ and the 2002 LQ9. If you have an LQ9 and you desire more power output, stretching it out up to 1,000 HP is definitely possible.

The 3rd generation LQ9 6.0L engine is endowed with a whopping 345 horsepower and 380 ft-lbs torque output levels, respectively. Its flat top piston design made a remarkable difference between the LQ4 and the LQ9.

The result of the advancement in building the LQ9 introduced a superior compression ratio, horsepower, and torque output over the LQ4.

Therefore, if you’re contemplating between the LQ9 and the LQ4, the LQ9 horsepower is certainly an advantage that you should pay attention to in order to make the best decision.

Nevertheless, the LQ4 still ranks within the recommended optimum horsepower level ideal for a vehicle. Meanwhile, the LQ4 horsepower can surge drastically up to 1,000 HP or more if you engage a turbo or nitrous.

Also, note that the boost would require a corresponding upgrade of specific components, including the headers, cold air intake kit, aftermarket exhaust, etc.

Differentiating between the LQ9 Vs. LQ4 3rd generation 6.OL engines is no doubt very tricky, especially only relying on their external features. Nonetheless, looking beyond what you see to x-raying some of the intangible features will be really helpful.

However, the difference in the horsepower, torque, and compression ratio is traceable to the varying piston designs. Therefore, the main difference between the LQ9 and LQ4 is the pistons. While the former comes with flat surface pistons, the latter is built with dished pistons.