The complexity of the mechanical operations in a vehicle reveals that there is more to an engine than its brand name or physical size. For example, the firing order is one of the significant operations that determine your car’s engine performance and efficiency.

The LS firing order is unique and delivers maximally for all GM’s Chevy Generation III and IV small block engines. Now, let’s find out the unique firing order and cylinder numbers that make all the engines from the LS family stand out among others. 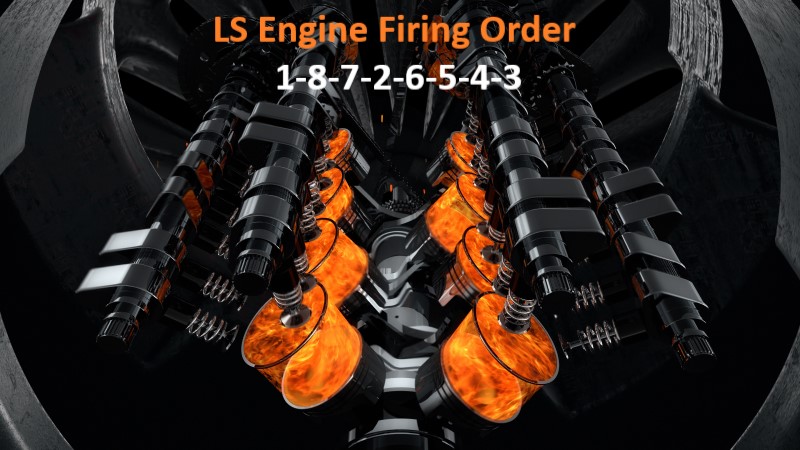 LS stands for “Luxury Sport,” and this RPO code refers to all third and fourth-generation V8 engines with small blocks. These engines were featured in General Motors’ Chevrolet. To be specific, the first LS engine was fitted in the Chevrolet Corvette C5 in 1997.

The engines’ firing order is one of the significant reasons Chevy stands out superb in the automotive industry. The firing order is partly responsible for the power and torque output, as well as the cooling and general smooth running of the engines.

Firing order is the sequence in which a vehicle’s internal engine’s cylinders ignite in the process of generating power. The firing process combines the operations of the spark plugs and pistons.

The spark plugs’ ignition is responsible for pushing the pistons in a specific order, which is known as the firing order. It is basically spelled out in the form of a combination of numbers in back and forth orders, representing the cylinders.

The LS engines’ firing order is 1-8-7-2-6-5-4-3. This was orchestrated to upgrade the traditional Chevrolet small block/big block engines’ 1-8-4-3-6-5-7-2 old firing order. However, upgrading your Chevy’s old engine’s firing order is possible if you can access an expert auto technician who’s trained for such operations.

While various manufacturers have their unique cylinder numbering styles, GM designed the LS engines with four cylinders each on both sides (left and right) of the engine block. Hence, the LS engines are tagged V8. The 4/4 equal arrangement is referred to as the “fold method” of cylinder numbering. This is commonly used by manufacturers across the automotive industry.

Back to the LS cylinder numbering! You will need to stand directly opposite the car in front of it to ascertain the cylinder numbers, unlike other LS engine specs. Typically, the engine block carries the cylinders 1-3-5-7 on the driver’s side, which is by your right.

On the flip side, the cylinders 2-4-6-8 are on the passenger’s side, which is your left. Cylinder #1 and cylinder #2 are closest to you, while cylinders 7 and 8 are the farthest at the other end of the engine block.

Read Also: LQ9 Vs. LQ4 Engine: What are The Main Differences

The 1999 4.8L LS engine is one of the first GM pickup truck engines in the LS engine list among its third-generation V8 counterparts. It was produced between 1999 and 2007 until GM ceased producing this engine.

GM seemed to have selected a number of engines to reign between 1999 and 2007 because the 5.3 LS falls within this period. This engine was popularly known as Vortec 5300. It comprised the LM4, LM7, and L59 V8 engines.

The 5.3 LS happens to be more popular than its 4.8 LS counterpart. It also had the potential to accommodate upgrade system kits like cold air intake systems, nitrous oxide, superchargers, turbos, high-flow cylinder heads, and turbos.

The 5.7L LS was designed as part of the third generation small block engine in the LS lineage. It was built for GM’s high-performance cars like Camaro, Corvette, Firebird/Trans Am, CTS-V, and GTO.

The engine was introduced in 1997 and was in production for about 8 years until it was discontinued around 2005. Like its previous counterparts, the 5.7 LS was superb in its time and still stands as one of the best LS engines of all time.

The 6.2 LS was released in 2000 to replace the older 6.0 LS engine. However, it reigned between 2000 and 2017. Nonetheless, this engine saw an extended appearance in GM trucks than the previous LS engines.

GM’s constant upgrade of its product line continued the LS lineage until the 7.0L LS7 was released. The V8 LS7 became a “fresher” (new release) among all the preceding LS engines in 2006 when it featured in the Chevy Corvette Z06.

Also, the 7.0 LS is configured with the fold method cylinder numbering style, with the odd-numbered cylinders facing the even-numbered counterparts. In other words, cylinders 1,3,5, and 7 at the driver’s side sit facing cylinders 2,4,6, and 8 at the passenger’s side.

Meanwhile, the LS engine operates with the 1-8-7-2-6-5-4-3 firing order. This was orchestrated as an upgrade to the LS family. GM decided to upgrade the traditional SBC/BBC firing order in the LS to the new standard LS firing order because of its numerous advantages.

The LS firing engenders a power boost and increased torque output. It also minimizes irregularities of crash-shaft and increases the possibility of engine durability, as well as better heat management. These and a few other factors are the reasons why the LS firing order is better than the SBC/BBC firing order. 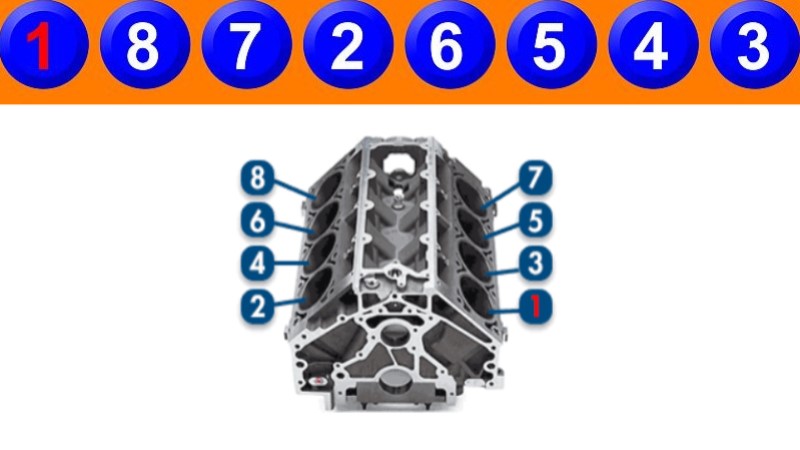 Q: Do all LS engines have the same firing order?

Yes, all LS engines are built with a similar firing order. The order in which power moves across the various cylinders of an LS engine is 1-8-7-2-6-5-4-3. This cylinder firing order is peculiar to engines within the LS family.

With this correct (standard) firing order, LS engines deliver optimum performance and efficiency with minimal vibrations when running. Of course, the firing order of an engine can influence the vibration, power output, and engine life ultimately.

The LS engines’ standard firing order performs an amazing job by alternating the firing process between the banks.

Q: Can you change the firing order of the LS engine?

Swapping the old SBC/BBC firing order may not be a worthy venture in the end. Therefore, you may want to find out the pros and cons of swapping out your engine’s current firing order before opting for a new firing order.

Q: What is the best firing order?

A clockwise 1-8-7-2-6-5-4-3 firing order is best for a vehicle, especially GM’s product lines with the LS engines. This was a result of various simulations with the old small block Chevy and big block Chevy that had a 1-8-4-3-6-5-7-2 firing order.

The LS firing order provided solutions to most of the limitations of the old SBB and SBC. The good news is that swapping up the traditional small block Chevy and big block Chevy engine firing is possible. However, ensure to contact an expert auto mechanic for professional advice.

A 4/7 firing order is an operation that switches the positions of both cylinder #4 and cylinder #7 such that they replace each other. In other words, the swap is meant to move cylinder #4 from its position to occupy cylinder #7’s position.

The same applies to cylinder #7, which is also moved to occupy cylinder #4’s initial position. Swapping firing orders can offer a couple of benefits; however, ensure to seek professional advice from an expert mechanic before making a final decision about the operation.

A vehicle’s engine firing order may not directly affect its sound. However, an incorrect firing order can trigger other components within the engine to vibrate and give off unpleasant noise while the engine is running.

Like every other operation in a vehicle, the firing order is very important to the smooth running and durability of the engine.

After a thorough review of the different LS engines across various generations, it is an established fact that all LS engines are built with a similar firing order. The same is true for the cylinder numbers as well.

However, the LS firing order isn’t there for decoration or uniformity. For example, the Chevy Silverado 5.3 Vortec firing order is designed to offer power and torque boost, enhanced engine durability, better heat management, as well as a harmonious engine performance at large.