Ensuring that your car’s oil level remains at the standard gauge should be a top priority for every car owner and driver. Several factors help in safeguarding the engine oil. The oil pan serves as one of the essential components that safeguard your engine oil to where it belongs. Knowing oil pan gasket leak symptoms will help you well. Oil Pan is located at the bottom of your car, and it is sealed with an oil pan gasket.

What is an oil pan gasket?

In general, gaskets are mainly used as cushioning and sealing agents, placed in between two components and fastened with bolts or nuts. So, what is the main work of an oil pan gasket? According to the above definition, the main purpose of the oil pan is to safeguard oil from dripping out of where it’s supposed to be.

The types of oil pan gasket in your vehicle will depend solely on the material used in manufacturing your oil pan. Aluminum pans, for example, use some form of liquid silicone while a pressed steel pan goes with a formed rubber gasket. While the engine is idling or running, oil travels through the engine oil galleries to lubricate all the components within the engine. The seal, the gasket forms accepts contraction and expansion from the heat produced by the engine. The cushion, the gasket forms a fight against damages from the engine. 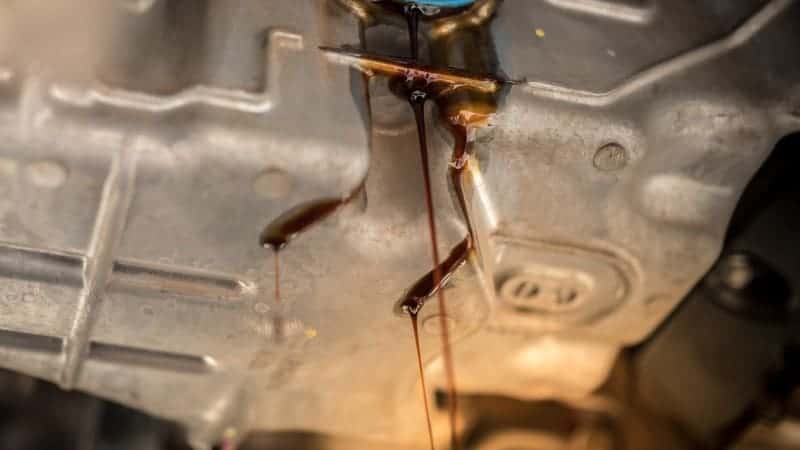 Let’s quickly look at the oil gasket leak symptoms, so you can easily detect when the oil pan gasket leaks.

Smoking issues: One of the most noticeable symptoms that will pop up when the oil pan gasket is long gone is smoke from your engine. The smoke usually comes up when the dripping oil drops on the exhaust pipes or manifold. Not giving adequate attention to this issue may cause other problems like damaging your oxygen sensors and other car components due to being soaked for long in oil.

Engine Overheating: Engine oil is one of the components that keep the engine running at standard temperature. With the engine coolant, the engine oil reduces excess heat and friction in the engine. If your engine oil drops far below the average level due to an oil leak, it will cause the car engine to overheat. An Overheating engine could cause severe damage to other engine components if not given much attention.

Oil Puddles under your car: If you start noticing the car leaking oil when parked, it could be the oil dripping from a faulty engine oil pan gasket. Over time, the rubber material used in manufacturing the gasket will begin to deteriorate due to the high engine temperature that the gasket is exposed to. Eventually, the gasket will get weak or damaged, and you’ll start noticing a drop of oil under your car. Failure to take this as a top concern and fix the issue once you notice it will lead to low oil pressure and oil pump failure, which will profoundly affect your car’s smooth running.

Low Oil level: In some cases, at first, the oil pan gasket leak will start dropping a small amount of oil, which you’ll hardly detect. Usually, when driving with an oil pan gasket leak like this, the only symptom you’ll notice is a low oil level. This can as well display a check light on your dashboard. You should also bear in mind that some other issues could cause the check light to pop up. 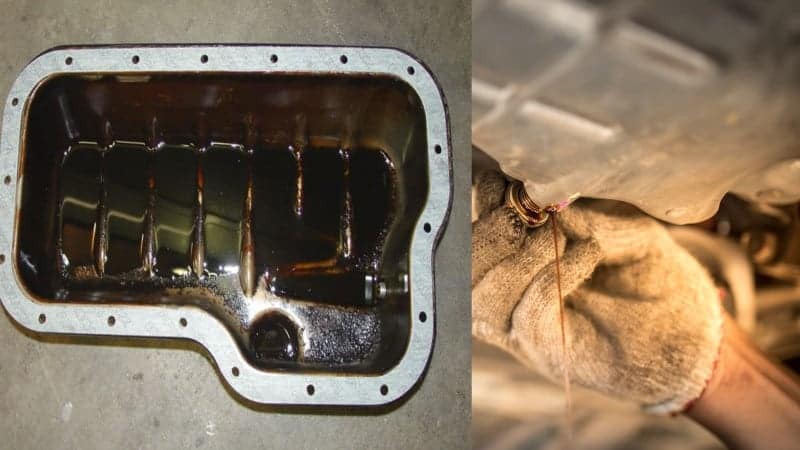 How to fix the oil pan gasket leak

Depending on your car model, year, and make, you may be able to replace your oil pan gasket yourself. However, you should know that you have to remove some other components to successfully access the oil pan on some cars. In some cars, you have to drop the entire engine for you to access Oil pan. So, ensure you consult your owner’s manual if you’re thinking of changing the oil pan gasket yourself. see the steps to follow.

Although, oil pan leaks might not necessarily have to be due to a bad or failing oil pan gasket. Once you notice any oil pan leak symptoms, ensure you find out where the oil is dripping from. An oil drain valve is removed whenever you drain out the oil in the oil pan. Because the drain valve or the oil plug is always removed and reinstalled back, it may cause an oil leak. For the oil pan gasket quick fix, you have to inspect the oil plug when you notice an oil leak.

However, there are some steps that you can follow to replace the oil pan gasket.

Step 1: Take safety precautions. Park your car on flat hard ground, engage the hand brake and block the rare wheels from moving. Raise and park the jack with Jack and jack stands. Before losing anything, you have to ensure you disconnect battery cables.

Step 2: Drain out the oil. Place your oil catch pan directly under the oil pan. Ensure you drain out all the oil since you’ll be taking off the oil pan.

Step 3: Unbolt the oil pan bolts. Find the bolts holding the oil pan together with the engine block. The bolts are usually 10mm or 12mm bolts. You should leave one or two bolts in place at the end of the edge of the oil pan after slacking them. It will help hold the oil pan firm and prevent you from spilling the oil.

Step 5: Take off the old gasket. Remove the old gasket and scrape off debris from the engine block surface. Use parts washer solvents to clean the installing surface. The cover has to be very clean and dry, so the new gasket can easily form a reliable seal.

Step 6: Install the new gasket on the oil pan. After cleaning the entire installing surface, place the new gasket and apply a slight instant sealant on the surface.

Step 9: Pour oil into the engine. Lower your car by removing jack stands and jack. Refill the oil until it gets to the standard gauge.

Like I said earlier, the engine oil and the engine coolant help reduce friction and maintain the average engine temperature. If the oil leaks until it gets below its standard gauge, it causes engine Overheating, and if not given attention on time, it causes severe damage to other engine components.

Q: How long does it cost to replace an oil pan gasket?

Depending on the technician working on the car, oil pan gasket replacement could last for 1.75 to 3hours. But if you’re not a mechanic and want to Cary out the replacement yourself, it could take between 4 to 6hours.

Q: How do you stop an oil pan gasket from leaking?

Stopping an oil pan gasket leak can be carried out in simple steps by following these steps;

Q: How hard is it to replace the oil pan gasket?

Q: What happens if you don’t fix an oil leak?

When you notice engine oil reduction, this will affect the optimal running of your engine. As you have learned from this post, your engine needs oil to lubricate moving engine parts from causing friction. When there is insufficient oil for lubrication, your engine will overheat and cause engine failure.

Now that you have seen the oil pan gasket leak symptoms and the damages it can cause to your engine system if not given immediate attention. You have to check your engine oil to make sure it’s always at the standard gauge. Any time you notice difficulty in your engine, ensure you try the DIY route or contact your mechanic for a professional diagnosis and fixes.