Engine oil stays in the oil pans found in the vehicle. These oil pans use drain plugs to keep the oil in them. Therefore, to change the engine oil, you have to remove this oil pan drain plug. But what if this oil drain plug is stuck? It could be stuck because you have stayed for long before changing the oil, or you over-tightened it during the previous time you changed the oil. What would you do to remove the drain plug? Here is your guide on how to remove a stuck oil drain plug. 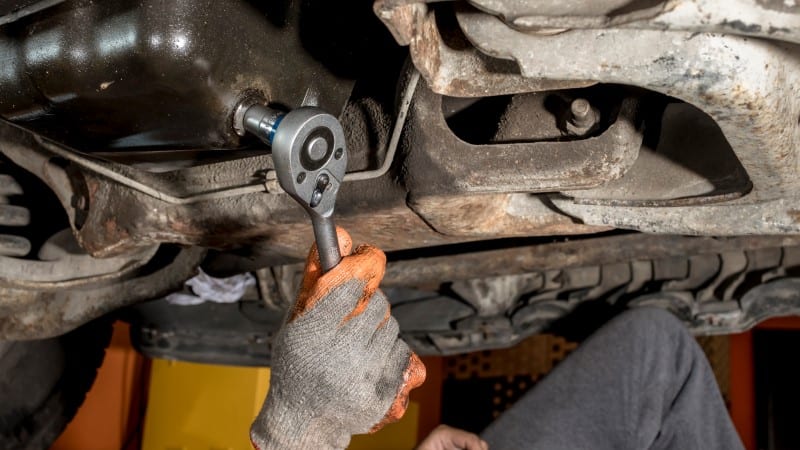 The main reason why an oil drain plug gets stuck is due to sludge. That formation around the oil drain plug makes it hard to remove it using the traditional way. The sludge forms around the drain plug because the oil in the engine has exceeded its oil change time. The oil then tends to oxidize under high temperatures. During oxidation, the molecules of engine oil break down. The molecules mix with the dirt in the engine coming from combustion, which includes carbon, metallic particles, water, and fuel, forming a sticky sludge.

How to remove stuck oil Drain Plug Step By Step:

Step 1: Warming Up the Car

One of the simplest ways of removing a stuck oil drain plug is to let the car warm up. You can do this either by leaving it in an idle state for a while or taking the care on a short cruise. After this, park the car on a stable surface. Using any hydraulic jack high up the car, then locate the oil drain plug and try to move the oil drain plug clockwise or counterclockwise until it loosens.

Socket wrenches are among the most famous tools used in automotive maintenance due to their practicality and flexibility. It is also a multi-use tool and can be used for various purposes. The best tool to use to loosen the oil drain plug is the socket wrench. Get the proper socket that matches the oil drain plug size and use it to remove the stuck oil drain plug. Consider a socket wrench with a longer handle since it provides you extra torque making your mission easier.

Step 3: Use a Hammer

Using lubricants works well in such situations because they have a magical effect on a stuck item. Rust removers work like a solvent substance for sludge and rust. Use it by spraying some on the oil drain plug and letting it react after a few minutes trying to remove the oil drain plug using a socket wrench or any other tool.

Step 5: Use a Gator Grip

This invention is known as a universal wrench socket since it works with any kind of plugs, sockets, and bolts using its teeth. The gator grip may help you to remove the plug.

Unfortunately, if you came to this step, this means that all the above tips and steps have failed to help you remove the stock oil drain plug. Do not grief. It is not bad to ask for help when things become complicated. However, be careful of whom you seek help. Make sure that you are getting help from an expert. Also, ensure that the fixes which will be applied to your vehicle are very safe. Let the person explain to you what is happening and why. Removing this suck oil drain plug may require some machining skills in order to avoid the situation from happening again after putting in a new plug. 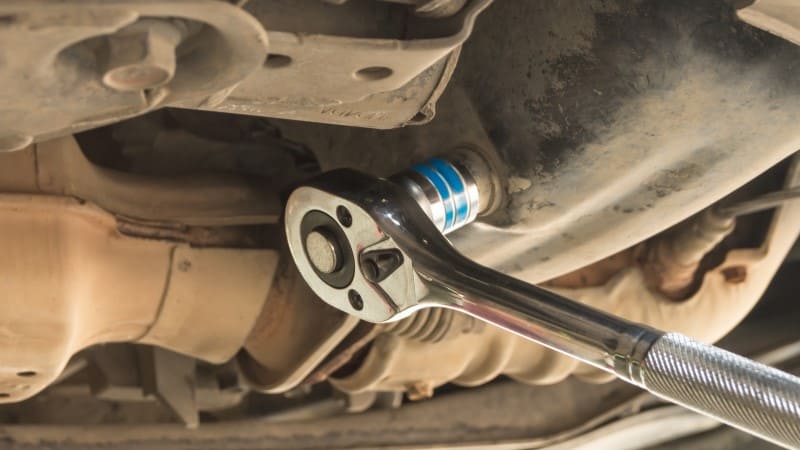 You May Like: How to Remove a Stuck Oil Filter

Q: How Do You Unstick An Oil Drain Plug?

This is a very easy task. Begin by ensuring that the car is parked on a stable surface. Using a hydraulic jack or a manual jack, lift the car in properly. Locate the engine oil pan. You will find it under the engine itself but do not interfere with the gearbox oil pan after you have located the engine oil pan, some rust removal spray.

Q: How Do I Remove A Stripped Oil Drain Plug?

Having a stripped-out oil drain plug is something very annoying. There are some ways and tricks you can use to solve this problem. Some tools you will need are a hammer and a flathead screwdriver. Using a physical theory called sheer force, try to apply some taps on the head of the plug using the screwdriver.

Put some force with a hammer. This is one of the ways that experts use. The other way is to apply heat to the oil drain plug. Just like other metal properties, the heat causes it to expand. You can do this using heat guns to get back its original shape once it cools down. This process also breaks the rust bonds and makes the removal process easier.

Q: What Tool Can I Use To Remove A Stripped Bolt?

Apart from the traditional ways, there are also professional effort-free ways you can use to remove a stripped bolt or oil drain plug. One of these ways is by using Irwin Tools BOLT-GRIP Extractor. This is a stripped oil plug removal tool designed specifically to remove rounded, rusted, or painted-over bolts and plugs.

The tool is made of high carbon steel to ensure durability and long life. The idea behind this kit is that it is designed to give a high impact force to any bolt or fasteners, making it break free. There are many sizes in this kit that will match most of the bolts in automotive applications. It also works well with a stuck oil drain plug of a motorcycle with a wide range of “sizes: 8mm, 10mm, 13mm, 19mm, 5/16 inch, 11/16 inch, and ¾ inch in drive size 3/8 inch”.

Q: Where Is The Drain Plug Located?

An oil drain plug is a large nut usually located in the lowest point of the oil pan at the bottom of the engine, where all engine oil capacity rests. The reason why it is located here is for it to drain the maximum amount of oil when changing engine oil. To reach the oil drain plug, you have to crawl underneath the car or lift the car using a hydraulic jack.

You May Like: How To Remove A Stripped Spark Plug

Q: What Size Is An Oil Drain Plug?

There are four common plug sizes which include 1/4, 3/8, 1/2, 3/4 inch. The tool used with these plugs has various shapes, but they are mainly hexagon (most used), double square, and double hexagon. Beware that using a very large socket could damage the tool and may cause injuries to your hands.

Before starting the process of changing the engine oil yourself, you need to decide which socket size you will use. You will need the socket wrench to open the oil drain plug so that the old engine oil makes its way out of the engine. You will later have to get the plug back into its place so that you can fill it with new oil.

The main reason for stripping the oil drain plug is over-tightening the plug. This will distort the head of the plug, making it impossible to loosen or tighten it in the normal way of using traditional tools.

How to remove a stripped or rounded oil drain plug YouTube