Have you heard of the saying that says too much of anything is bad? Too much of anything is bad for humans, and the same is likened to your car engine. A car engine cannot run without engine oil, but adding excess oil to your engine can cause hazardous effects.  Engine oil is a vital lubricant to cushion the engine parts and keep them neat and clean, diminish friction of the moving parts and avoid overheating. Hence, it is imperative to do a scheduled oil change.

Excess oil in a car can cause engine oil overfill problems such as clogged catalytic converters, fouled spark plugs, or engine damage. This is why it is important to know overfill engine oil symptoms and take the necessary steps to fix them before they escalate to bigger problems. This article will discuss oil levels too high symptoms and how to fix them at length. 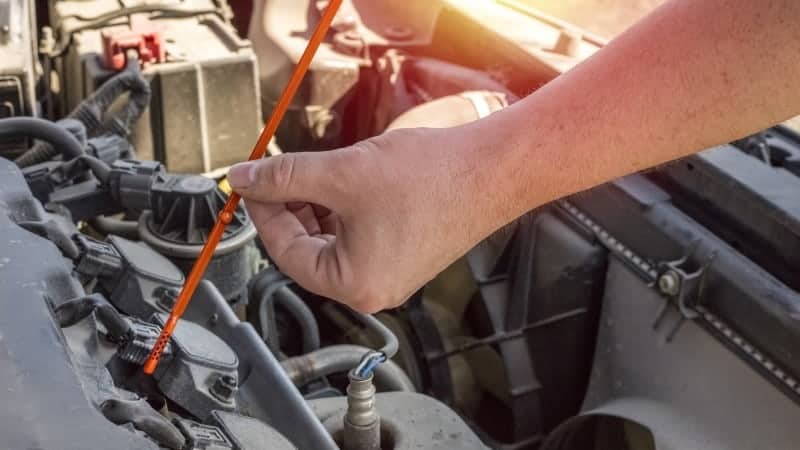 Several symptoms will pop up when you overfilled your engine oil. The common overfill engine oil symptom is white smoke with a grey or blue tint. You may see excess white smoke coming from your exhaust tailpipe due to too much oil that slips into the combustion chamber. However, there are other symptoms that you may notice.

The smell of burning engine oil

when you overfill engine oil, it will start looking for a way to escape. As a result, the oil may creep on hot engine components and burn. The smell of burning engine oil can be unpleasantly pungent. Suppose you smell it; there is a leak in the engine compartment.

Oil puddle underneath your vehicle

High oil pressure resulting from excess oil can damage weak seals and leak out. You may see a puddle of engine oil under your car, especially after an oil change. The oil leak can come from the dipstick compartment.

High oil pressure indicates that the engine oil is not flowing as it should and it’s not lubricating engine parts correctly. An engine that lacks proper lubrication can suffer engine wear due to friction, damage to internal engine components, and in the worst scenario, it can lead to engine Knocking. However, not all vehicles have an oil pressure indicator, but those with the indicator may display a high oil pressure light if the oil is overfilled.

If you overfill engine oil by 1liter or above, you risk frothing the engine oil due to connecting rod and crankshaft whipping oil into it. This will cause fouled plugs and lead to rough idling and engine misfire.

If your dashboard oil gauge wiggles back and forth between empty and full, it may indicate an overfill engine oil. The gauge is designed to work properly within a certain level, so when the oil goes above that range, it will lead to a confused gauge.

Too much oil in the engine will turn to foamy oil and lose its lubricating power. Insufficient lubrication inside the engine compartment increases friction and leads to engine overheating.

This is one of the last symptoms that will pop up when you overfill and drive your vehicle for a long. The sound of metal-to-metal rubbing can be unpleasant. An overfilled engine will develop a screech, grind, or groan sound after long use.

Overfilled engine oil can creep through the piston rings and soak the spark plugs, leading to greasy plugs and causing weak acceleration.

whether you’re using synthetic or normal oil, if the spark plug is coated with too much oil and can’t provide the spark needed for the combustion process, the car won’t start.

How do you fix Overfill engine oil symptoms?

The effects of overfilled engine oil can be easily fixed if you know exactly what to do. However, you should take your vehicle to a mechanic garage if you are not a DIYer. Keep in mind that in as much as overfilling engine oil by 1 quart is dangerous, not having enough engine oil is also dangerous. So, if you decide to reduce the oil yourself, you need to pay close attention to how much oil is left in the vehicle. There are two methods to reduce overfilled engine oil, and they are as follows:

Open your hood and allow the engine to cool down. Remove the dipstick and place it on the clean rag to avoid contaminating dirt and debris. Read the manufacturer’s instructions and set up the pump. Connect it to a power source and dip the extraction tube into the oil dipstick hole and position the oil pan. Turn on the oil extractor pump and pay close attention to the oil pan to keep track of how much oil you have removed. You need to check the oil level from time to time with the dipstick.

Once the oil level comes down to the normal gauge, switch off the oil extractor and plug in the dipstick. Hopefully, your vehicle should be running nice and smoothly –  well, that depends on the effect it had already caused on the moving parts.

Drain the engine oil manually: Not every car owner and even mechanics has an oil extractor pump, which makes this method a general option. However, it is a bit complicated as you need to slide under the vehicle to drain out the engine oil. But before you start draining the oil, you need a jack, jack stands, a socket that matches your oil sump, a ratchet handle, oil pain, a pair of gloves, and glasses.

Lift the vehicle and support it with Jack stands for safety, slide under the vehicle and place the oil pan directly under the oil sump. Now, take your socket and loosen the oil sump; you can decide to take off the sump halfway or remove it completely, but you need to be fast enough to plug it back once you have the quantity you intend to remove.

In any case,  you should keep in mind that draining Overfilled engine oil using any of these methods will not yield results if it had already caused damage to the engine parts. So, how long can I run my engine with too much oil? You don’t need to drive your vehicle if the engine oil is Overfilled. You need to reduce the oil once you notice it’s too much to avoid damage to your engine.

What happens if you overfill your engine oil? YouTube

Never drive your car once you notice overfill engine oil symptoms. Suppose you notice these symptoms, pull your vehicle to one side and check the dipstick. Some of these symptoms may overlap with other engine problems. So, it is ideal to always go for a scheduled inspection and maintenance.